When the Oculus Rift S offers a pretty darn great VR experience for £399 / $399, is there really any reason to spend upwards of a grand on a headset like the £919 / $999 Valve Index? Probably not if, like the rest of us, you don't have a spare mattress full of cash squirrelled away in your back bedroom. However, if you do fall into the category of loaded individuals who want the absolute best VR headset you can buy today, then the Valve Index is definitely the headset to go for over the similarly priced HTC Vive Cosmos Elite.

For starters, the headset itself is just a lot more pleasant to use and wear for longer periods of time. That's partly down to the thick fabric padding around the face and headband, but the Index also offers the greatest amount of adjustment out of all the big PC-based VR headsets you can buy at the moment.

There's an interpupillary distance slider underneath the main display (which you don't get on the Rift S), a big, easy to reach dial on the side of the headset that lets you move the display closer or further away from your face (which is on the Rift S but not on the Vive Cosmos), and a tight and tactile rear dial that adjusts the circumference of the headband. There's also a rather lovely, premium-feeling velcro strap on top of the headset (a sentence I never thought I'd write), giving you plenty of options to get a comfortable fit.

That said, it's still a relatively top-heavy headset for someone with a smaller than average head like myself. Most of the pressure tended to fall on my forehead, for example, and there were occasions when I could feel it slowly slipping down the front of my face, resulting in a slightly blurry-looking screen even when the rear dial was at its tightest setting.

It didn't take much to fix - shuffling it back up my head usually did the trick for another half hour or so - but I'd imagine that those of you with even smaller heads than mine may find it more problematic. The good news, at least, is that it didn't give me nearly as much of a headache afterwards as the Vive Cosmos Elite, and I was generally able to use it for about an hour or so before I had to take a break.

Technically, the Vive Cosmos Elite has a higher resolution display than the Valve Index, coming in at 1440x1700 per-eye (making for a combined resolution of 2880x1700) compared to the Index's 1440x1600 per-eye resolution (or 2880x1600). In practice, though, those extra 100 pixels really don't make much of a difference when it comes to the overall clarity of the screen, and both headsets looked just as sharp as each other.

Instead, the Index sets itself apart with its wider field of view of 130 degrees, and the option to push its refresh rate all the way up to 120Hz or 144Hz for the smoothest possible experience. The Vive Cosmos Elite, on the other hand, is limited to just 90Hz, with a field of view of 110 degrees.

The wider FOV makes an immediate impact the moment you put the headset on. There's still a bit of a black porthole effect at the very side of the screen, but I wasn't able to see anything limiting my view at the top or bottom. I wouldn't go so far as to say it was a transformative experience, admittedly, but being able to see more of the world around me was definitely a bonus when I was nosing around the detail-packed environments of games such as Half-Life: Alyx.

The higher refresh rate options, meanwhile, will only make themselves apparent if you've got a powerful enough graphics card to drive those kinds of frame rates. Of course, if you've got a grand to spend on a VR headset, chances are you've probably got a pretty powerful PC to go with it. However, would I say that the RTX 2070 Super I've used to test all three of the big PC headsets over the last month made the Index feel noticeably smoother overall? Probably not, but then I'm also not someone who can really see the difference between 90Hz and 120Hz on a high refresh rate gaming monitor, let alone a VR headset. Again, though, it's good to have the option all the same, and it gives it more room to grow and improve over time when you next come to upgrade your PC.

The Index is also a smidge easier to get going on the setup front as well. It still needs two external base stations to be plugged in at opposite corners of your play space in order to track your movements, but the SteamVR 2.0 trackers that come in the box with the Index aren't just newer than the ones that come with the Cosmos Elite, but they also come with their own stands and swivel brackets so you can angle them in the right direction a lot more easily.

I also had fewer problems getting it to work with SteamVR as well. It still threw the odd tantrum every now and again, admittedly, saying it had encountered a critical error and needed to either quit or restart, but on the whole I was able to get it working much faster than the Vive Cosmos Elite - probably because I wasn't having to contend with HTC's Vive Console software at the same time.

The real jewel in the Index's virtual crown, though, is its excellent Index controllers. These are hands down the best VR controllers around. Not only are they light and super comfortable to use thanks to their tactile buttons and extra band of padded fabric that wraps around your knuckles, but they also offer the most accurate finger tracking. In Half-Life: Alyx, for example, it knew exactly where each individual finger was on the controller regardless of whether I was pressing or touching its rear trigger button - a feat that's simply not possible on either the Oculus Touch controllers, the Vive Cosmos controllers or the old Vive wand controllers that come with the Cosmos Elite.

That extra fabric band also means they don't immediately fall to the ground if you ever accidentally relax your hand for a second. Whereas I was always conscious I had two large maraca-like objects in my hand with other VR headsets, the Index controllers just felt like a natural extension of my hand, which is exactly what you want if you're after complete and total immersion. 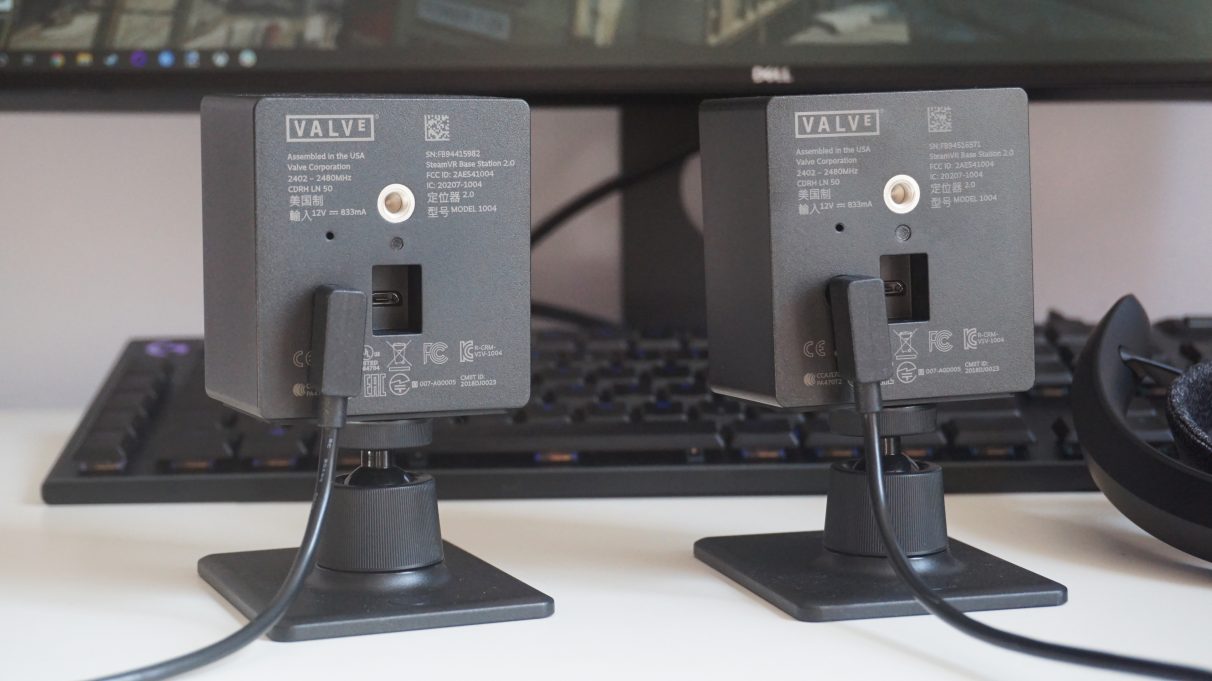 The Index has the best built-in headphones of any VR headset as well. Much like the headphones on the Vive Cosmos and Cosmos Elite, they're off-ear jobs that don't need to touch your face in order for you to hear what's going on, but the quality of the sound is noticeably richer and more detailed than its Vive counterparts. There's a warmth and fullness to its music and dialogue that feels like you've got two proper PC speakers suspended off your ear lobe, enhancing that sense of immersion even further. The Vive headphones still do a pretty decent job, but they've got nothing on the Index ones.

Overall, then, the Valve Index is absolutely the gold standard of VR headsets right now. It's not completely perfect, as I feel there's still more it could do to accommodate people with tiny noggins like myself, but its accurate tracking, superb controllers and headphones and general ease of use make this the VR headset to buy if you've got the money to spare.

Indeed, it's pretty much a no-brainer for those buying in the UK at the moment, as it only costs another £20 over the Vive Cosmos Elite headset and comes with infinitely better kit to boot. Those in the US, on the other hand, are facing an increase of another $100 over the Cosmos Elite, but as I mentioned in my Cosmos Elite review, I think this is money well spent, if only because you get those lovely Index controllers with it, which are a massive step-up from the old Vive wand controllers that come with the Elite. In fact, I'd even go as far as saying they're a must-have if you're looking to play fast-paced action games such as Half-Life: Alyx these days, as the Vive wand track pads just aren't fit for purpose anymore.

That's not to say that everyone needs to spend almost a grand to get a great VR experience, though. It is, after all, a heck of a lot of money, and you simply don't need to spend that much when the £399 / $399 Oculus Rift S does such a bang up job at the other end of the price spectrum. Sure, it's not as advanced or as capable as the Valve Index, but it sure does outstanding, tracker-free VR for a lot less.

Plus, you get a bigger library of VR games with the Oculus Rift S, as the Valve Index only lets you play games that are compatible with SteamVR. Yes, most of the best VR games are multiplatform, but there are a few Oculus exclusives such as Robo Recall, The Climb and Lone Echo that are well worth playing and can't be found anywhere else. As a result, I'd still recommend most people go for the Oculus Rift S if they're looking to get their first VR headset, but if you're a VR veteran looking for the absolute cream of the crop, or indeed the best VR headset for Half-Life: Alyx, then it simply doesn't get any better than the Valve Index.