Nine Parchments is a new co-op spellcaster from the makers of Trine. Four cranky wizards can accidentally shoot each other with beams of ice, orbs of fire and crackles of electricity while battling monsters. Our professional warlocks - John, Alec, Katharine and Brendan - have had a go.

Brendan: Right, which of us have played Magicka?

John: I played it briefly after it was released.

Alec: Me also yes. I have NO IDEA why you would ask that.

Katharine: Not I, sadly. I have, however, played many hours of Trine across the entire trilogy. That must count for something, right?

Brendan: It sort of does, but this ain't no Trine. This is basically Magicka. You flounce away on an adventure and cast spells to defeat monsters and bosses. If the baddies kill one of you, another player has to stand over your corpse and revive you. There’s a levelling system that means you unlock new spells beyond the novice magic of fire, ice, electricity and healing. And you get hats and staves that boost your stats, along with treasure chests always filled with exactly 61 XP and no more. 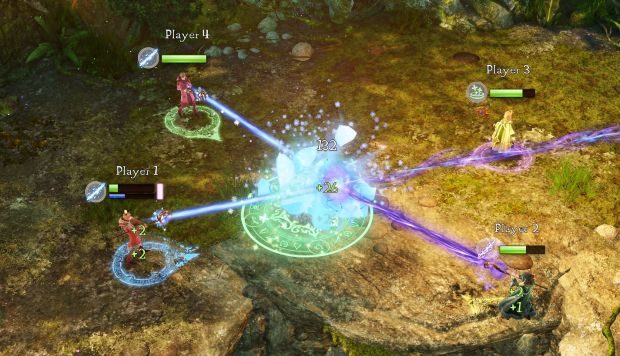 Alec: I’ve got a headache so I’m going to be really brusque and say it’s basically an OK game saddled with a clutch of really dumb design decisions and zero personality. GRUMP.

John: My head’s fine, and that remains true. It’s a mediocre-to-poor game that just recreates Magicka, but makes it more annoying to play.

Alec: I’ve just had a piece of Terry’s Chocolate Orange which has marginally improved my mood. So, I will elaborate that the basic co-op combat isn’t a bad time, in terms of how the team has to make complementary or contradictory spells work together primarily to not accidentally kill each other with summoned Death Circles and stuff. Unfortunately that doesn’t offset accidentally killing each other because half the players look the same so you lose track of which one’s you, and because the camera system keeps knocking people off-screen.

John: I really think any review of the game can begin and end with the fact that it’s possible for a player in combat to be dragged off screen by another player trotting north, and thus the combat player be killed after five seconds. That’s, like, not how you make games.

Katharine: This is true, but there were some pretty heroic moments in there as well. Like the time one of us repeatedly ran in circles trying to escape hordes of creatures while also trying to stand long enough in the dead players' revival rings in order to bring them back to life. I'll say that was me, because the game regularly decided I was the 'saviour' of the group in the stats presented at the end of each level (even if it also decided that I was consistently 'the worst' player as well). 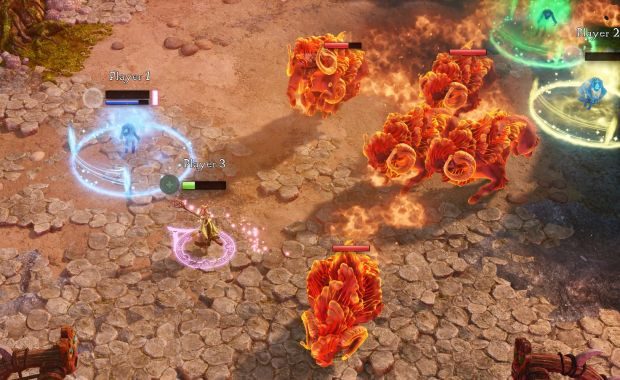 Brendan: I had fun watching this happen, but also some fun launching a “death flower” spell that planted a purple blossom on the ground which exploded like a proximity mine, sending out a circular wave of noxious dark energy. I especially liked to do this when everyone was calling out and chaotically trying to shoot some ice boar or whatever it is those things were.

John: I enjoyed myself on the level that it was us guys mucking around and calling each other names over Skype. But I don’t think I can credit much of that to the game. The game (and Alec Meer) frustrated.

Alec: I mean, this is the thing - it functions as a vehicle for some friends (and Brendan) killing monsters together, but the question is whether we would continue to choose this particular game as a vehicle. I’d do it again a couple of times sure, because I ultimately got into the rhythm of warning people that I was about to drop a massive fire-shooting totem thing in the middle of everything, so that it only roasted beetles and not them.

But it feels like, if you were gonna play it more consistently, as something you wanted to make *~progress~* in, the design wobbliness would just make it too annoying. And maybe there’s better stuff we could be doing. But whether there’s something that hits the same sweet spot of strategising a tiny little bit, so that you’re still free to laugh and joke, that I’m less sure about.

John: You absolutely did not, in any way, get into the rhythm of not roasting your teammates, and I cannot allow this to go uncontested. I have the screenshots. 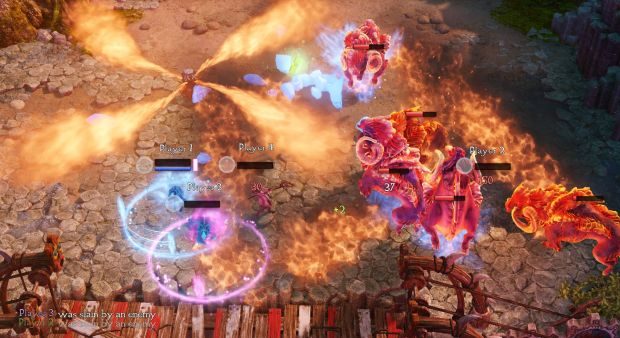 Alec: You just didn’t get into the rhythm of not getting roasted.

Katharine: None of you got into the rhythm of running into the large healing circles I lobbed over the other side of the screen, either.

Brendan: You did throw them quite far away, to be fair. To return to our disappointments, I didn't like how slow it was to make progress. Improving your character was like crawling up a buttery hill. It took longer than I expected for each of us to get a single new spell. But when the “choose-a-new-spell” screen did appear, lining us all up and giving us each a choice of some random icicle shards and death rays, I liked that the "re-roll" was simply a matter of throwing all your teammates' unwanted spells into a bag and picking one out. But maybe I only liked this gamble because it’s how I got the death flower.

Alec: You can have my death flower any time, Brendy.

Brendan: I’d rather have your fire pole. 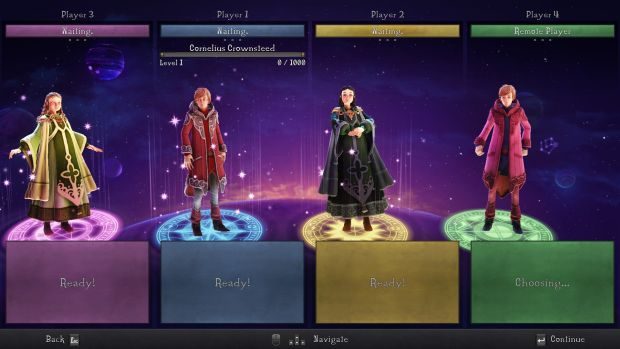 John: It’s worth adding that the four of us were playing with just two character choices, so limited are the options. So we were constantly trying to control our twin and getting into much confusion. With that, and the paucity of spells and upgrades, it felt like a game that was incessantly craving microtransactions, without any microtransactions.

Alec: There are more unlockable characters, yeah? It’s just that you’re limited to only two from the start, which is pretty wiiiiiiild in a game built for four-player co-op.

Katharine: We got really excited when we did finally unlock a new character, but then were instantly disappointed when it was just the same standard chap wearing different coloured robes. 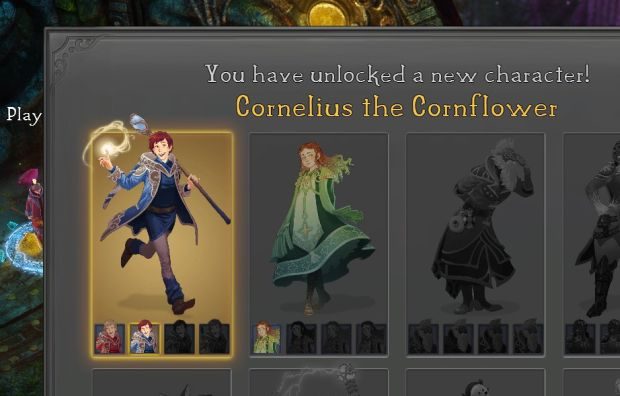 Brendan: Oh god, remember when we all saw the message saying we’d unlocked a new staff and opened up our menus to find the staff and we equipped the staff and it was the same staff for all of us?

Katharine: That was great, because it finally gave us something to tell each other apart.

John: And there was the good bit where we all got a hat except for Alec.

Alec: Story of my life. Oh, and even once I did unlock a new character, I couldn’t find a way to actually play as them, despite repeatedly leaving and rejoining the game. The menus aren’t exactly a beacon of UX, I’d say.

I mean, some of this design iffiness can get ironed out over time - they could do something about what happens if the camera knocks someone off-screen, they could widen the range of robe colours available from the off, but it’s whether people are going to be sufficiently motivated to return. I found it quite bland despite having ALL THE COLOURS in the environment, in ye olde Frozenbyte rainbow wonderland stylee. It didn’t feel like a world I wanted to spend a ton of time in.

The bits that sung the most to me - despite, yes, the fact that mostly I roasted my friends alive - was that ever so slightly Left For Deady element of consistently working out how not to leave anyone stranded alone but while also leaving space to not accidentally kill each other all the time. I’m genuinely curious to see how that works at a much higher level, with more spells and mega-baddies in the mix, but I can’t face the legwork of getting to that point. 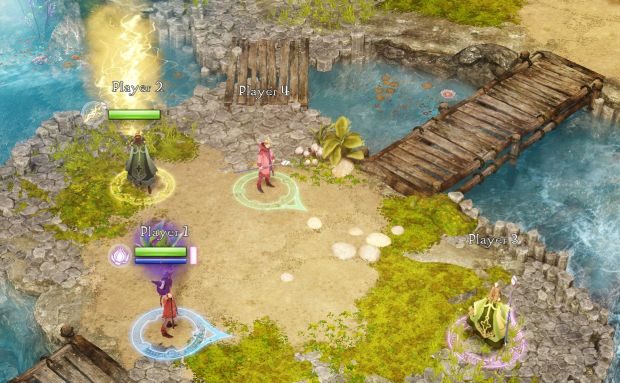 Brendan: I felt it failed to make the combining of basic spells a fun or necessary thing. I don’t remember us once saying to each other “Okay, you blast out some ice and I’ll deflect your beam” or even doing much of this unconsciously. It was mostly us shouting “watch out!” But maybe that’s because we’re a bad team.

Katharine: Well, we were consistently told in the post-game stats that our teamwork cooperation level was: "How, just how?" But I agree. If anything, the fact that you could alter the path of everyone's spells only made things more chaotic, as half the time we were doing it accidentally, throwing off course the only thing holding back flaming bull monsters from performing their instant death charge into everyone else.

John: Yes, everything felt too fast and frantic to be able to cope with the fiddle of the controls. I was playing gamepad, while I think everyone else was on keyboard, and none of us seemed to find it comfortable to switch spells on the fly. 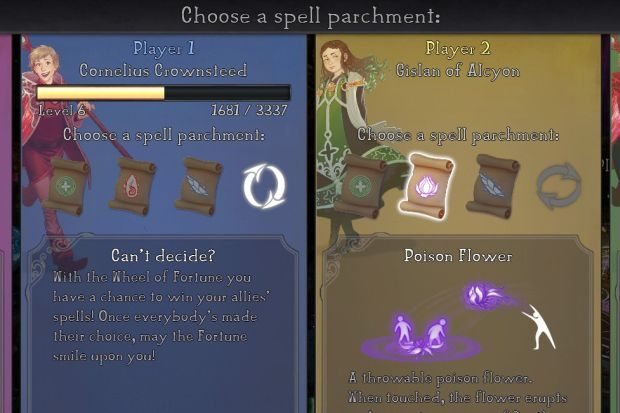 Alec: I didn’t struggle with that per se, but the key thing in Nine Parchments is that you have to target fire monsters with ice spells, or death monsters with healing spells, but there’s a really intense degree of coordination needed there. Not simply in terms of yelling ‘everyone pick ice!’ but because there’ll be a mix of monster types on screen, so everyone needs to be constantly doing something different against something different, but the whole pace of the game doesn’t really suit that balancing act. It just became a lot of running and screaming.

John: Not least that, some characters don’t have an ice spell, or whatever. So they’re pretty useless.

Katharine: Yes, I only had lightning and a dark spell, and my lightning magic depleted very quickly and seemed to have the longest ever cooldown in the history of cooldowns.

Brendan: It felt MMO-ish in that regard. Leaping around and trying to stay out of range of a fiery cone from one enemy, while casting a healing rune on the ground for your allies.

Katharine: It also didn't help that half the time we thought each other's spells were actually enemies. That fiery cone was one of Alec's attacks!

John: It’s fair to say that, for the most part, Alec WAS one of our enemies. 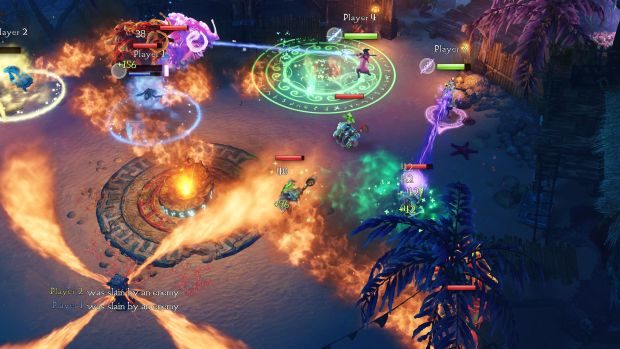 Alec: I guess I get this vibe - starting even with the game’s name - that Nine Parchments thinks it’s rather a genteel, thoughtful affair, but no, it’s carnage. It could make a virtue of that, but it doesn’t - you get all this wishy-washy dialogue and CBBC colour scheme instead.

Katharine: You can turn friendly fire off, but then you miss out on all your comrades exclaiming, "Oh, do get off!" or "Stop that!" in posh public school accents. There's also the small matter of having to reset your character's level each time you switch from playing single player to multiplayer. You can keep everything you've unlocked, but it does feel like starting from square one again.

Brendan: It sounds like few of us will be returning to Trineworld soon, even if our simmering resentment for Alec’s fire totem suggests we did have fun being obstructive jerks to one another.

Alec: Importantly, this was just based on a few hours of play - maybe we’d pick it up more over time, see the Matrix a little more. Again, it’s whether sufficient stuffs are given so far to make that happen or not. I guess if some of y’all said, hey, let’s spend a few hours being idiots in Nine Parchments again, that’d sound like an OK way to spend an afternoon. But there’s no way I’d just play it on me todd, no.

John: Would you not say, “Sure, but why not in [other better game]?”