If you click on a link and make a purchase we may receive a small commission. Read our editorial policy.
Developer: Vestaria Project
Publisher: DANGEN Entertainment, Gamera Game

Look, do you like Fire Emblem? If so, do you believe the series peaked with the release of Thracia 776, twenty years ago? Well, if that's you, then great. You're gonna adore Vestaria Saga I: War of the Scions. On the other hand, if you've never played a tactical RPG of this broad type (think Disgaea or Banner Saga) before, it might be wiser to back away. This is a game for, and by, hardcore Fire Emblem fans, made by series creator Shouzo Kaga and a small team of dedicated followers.

What if you're somewhere in the middle? Well. More general tactics game enthusiasts will find plenty to love here - but they'll have to be prepared to get accustomed to some typical Fire Emblem idiosyncrasies which Vestaria never bothers to explain.

Vestaria Saga plays very similarly to Fire Emblem games from the SNES-GBA era. the only thing missing is the classic 'weapons triangle'.

For the uninitiated: imagine a chess board, but with trees and forests and rivers on it. Your troops are your chess pieces. They come in different types, each with its own perks. Mounted knights can cover a lot of squares in a single turn. Archers don't have the same mobility, but can hit enemies from afar. Healers heal. Swordmen stab. You get the drill. You move all your pawns at once, and then your enemy does the same.

There is a tutorial here. In theory. See, the first map is filled with little houses. When one of your troops reaches one, they can get inside and chat with friendly NPCs who will explain how to play the game. But you might miss the tutorial entirely, because the game forgets to tell you "hey, you can visit homes and chat with people in the middle of a fight; it's useful."
The game doesn't even explain how to move your handful of troops around. How to open the menu. Or the fact that pressing ESC quits the game entirely with no warning.

(On which point: I highly encourage you to open the game's config.ini file and remap controls before starting. I accidentally lost hours of play - but you don't have to suffer like me).

In technical terms, the game is a mess. It's quite ugly (though the music is, by contrast, pretty great), it only runs in 4:3 resolution, and mysterious crashes are not uncommon. And before you ask: no, this is not an RPG Maker game. Although it does exude the same energy: small budget, big ambitions, and a deep nostalgia for ye olde classics. 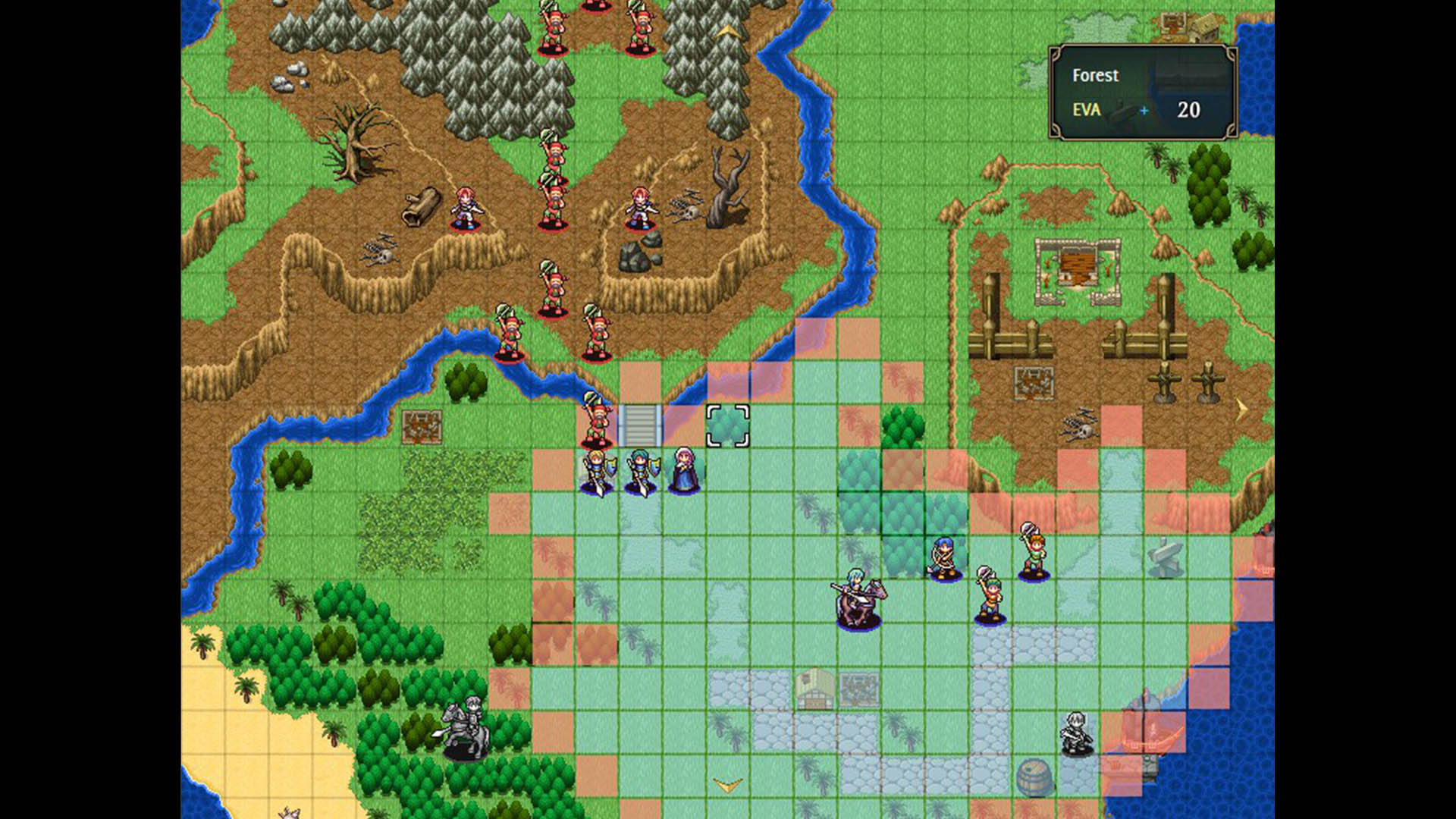 When compared to other strategy games, then, Vestaria Saga may look deceptively simple and outdated. All your characters can do is move around on a grid, use items or attack. There are no special moves, no equipment, and not much room for unit customization, either. Where Vestaria Saga truly shines, however, is in the level design.

Because while other tactical RPGs, like Disgaea, are focused on customizing your troops, Vestaria is all about unit positioning and planning ahead. Maps are sprawling, with varied objectives that often change in the middle of a fight. Defeating all enemies is rarely the main goal, either. During the game you'll have to escort characters, protect villages, conquer strongholds, solve puzzles and negotiate with enemy leaders. A single map can take hours to complete, and will see you juggling dozens of allied units, party members and enemy NPCs.

I love the way the game seamlessly mixes cutscenes, dialogues and battles, making everything happen on the same screen. Enemy reinforcements might appear in the middle of a fight, or you might gain a new unit by talking to a bad guy and persuading them to join your side. It's all so wonderfully dynamic: it feels like you're telling a story through your actions, and not just clobbering enemies in order to progress to the next level. 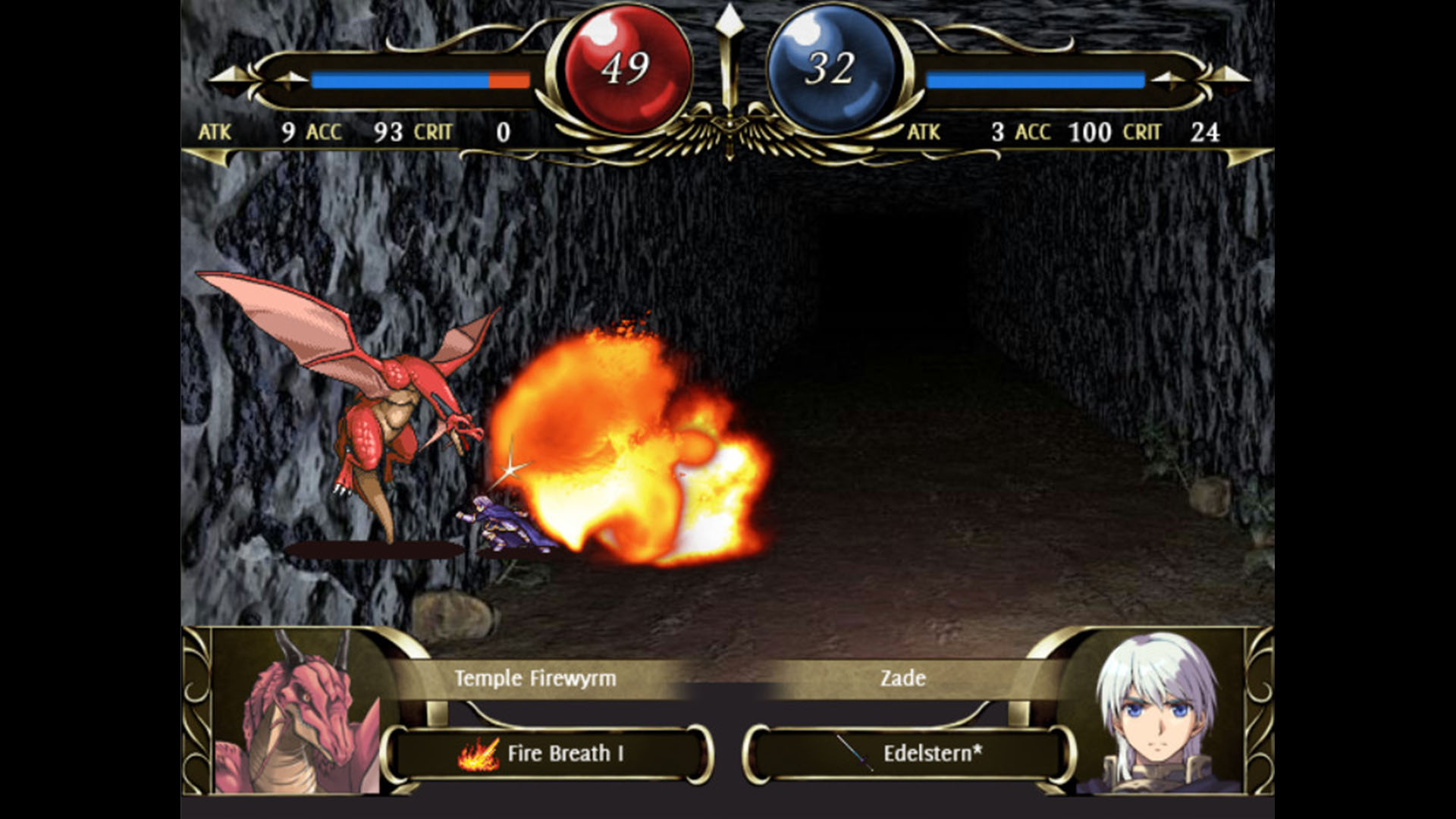 An early fight, for example, started with two main goals: reach a village that was being attacked by bandits, and capture the enemy fort on the other side of the map. The bandits immediately circled the village and, after a tense discussion, three brave villagers came out to fight. I sent my knight, Troy, rushing North through the enemy lines to bring the villagers some much-needed support. I sent my slower units North as well, hoping the enemies would attack them instead of chasing after the mounted knight. The strategy paid off, and Troy arrived just in time to defeat the bandits. After another cutscene the villagers, hurt but still determined to fight, decided to join my ranks.

On the other side of the map, a broody swordsman entered the enemy fort. A brigand was boasting about killing innocent people, and the swordsman cut him down, thereby establishing himself as the game's evil-but-noble-hearted mid-boss.

I let my troops regroup, moved towards the fort, and... saw that a second village was getting trashed by the surviving brigands. Saving this second village wasn't on my to-do list, but I felt bad about it. So I reloaded an early save, sent Troy to the second village, and realised entirely too late that his only weapon, a sword, only had three uses left. It broke in the middle of a fight, leaving my boy defenceless. I reloaded again. Needless to say, Vestaria Saga features perma-death. 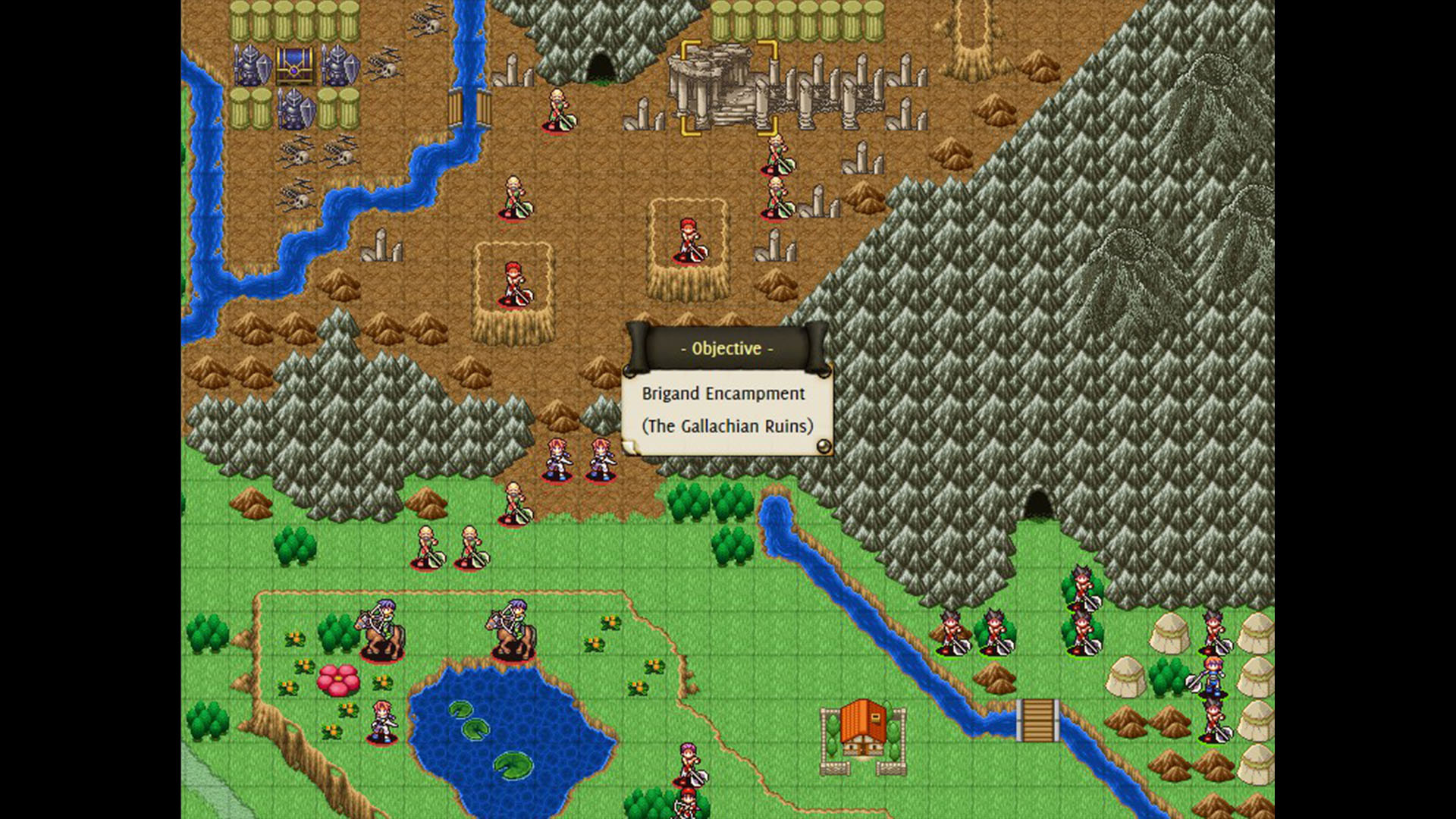 But why is all this death necessary?, you might be wondering at this point. Who are we fighting? And why?

Honestly, I don't know. The game starts with a castle getting assaulted, and your immediate priority is to escort the princess to safety. Your handful of troops are guided by Zade, a bright but inexperienced commander who suddenly finds himself with big responsibilities, a dead family, and no country to call his own. After fleeing the invasion, he and his party escape to a neighbouring country, but the local lords aren't too keen to take sides in the upcoming conflict. Zade and friends have to prove their worth, gain political allies, and... eventually help the princess get her kingdom back, I guess?

I got a bit lost. Vestaria is all too eager to info-dump you to death, filling your screen with maps, generals, kings, and buckets of lore. There are legends about wretched tyrants committing atrocious crimes centuries ago. Brigands roam the lands, terrorizing villagers. Wizards brood. Knights fight valiantly. There are dragons at some point. This is a fantasy game.

But while the plot never steers away from generic fantasy fluff, the game does a good job of fleshing out its cast through cutscenes. Some characters can even talk to each other in the middle of battles, cheering each other up and providing some commentary. All their banter made me care about my little chess pieces, even though everyone - and I mean everyone - talks as if they took a classic literature class once, and got really into the idea of Shakespeare.

I still loved them, however, and since the game lets you save every five turns, I dutifully reloaded the game every time someone died. You should abuse of that function too. Your troops will die often and without mercy, be it as a result of a bad decision, a nasty bug, or a last wave of enemy reinforcements popping out when you least expected it. 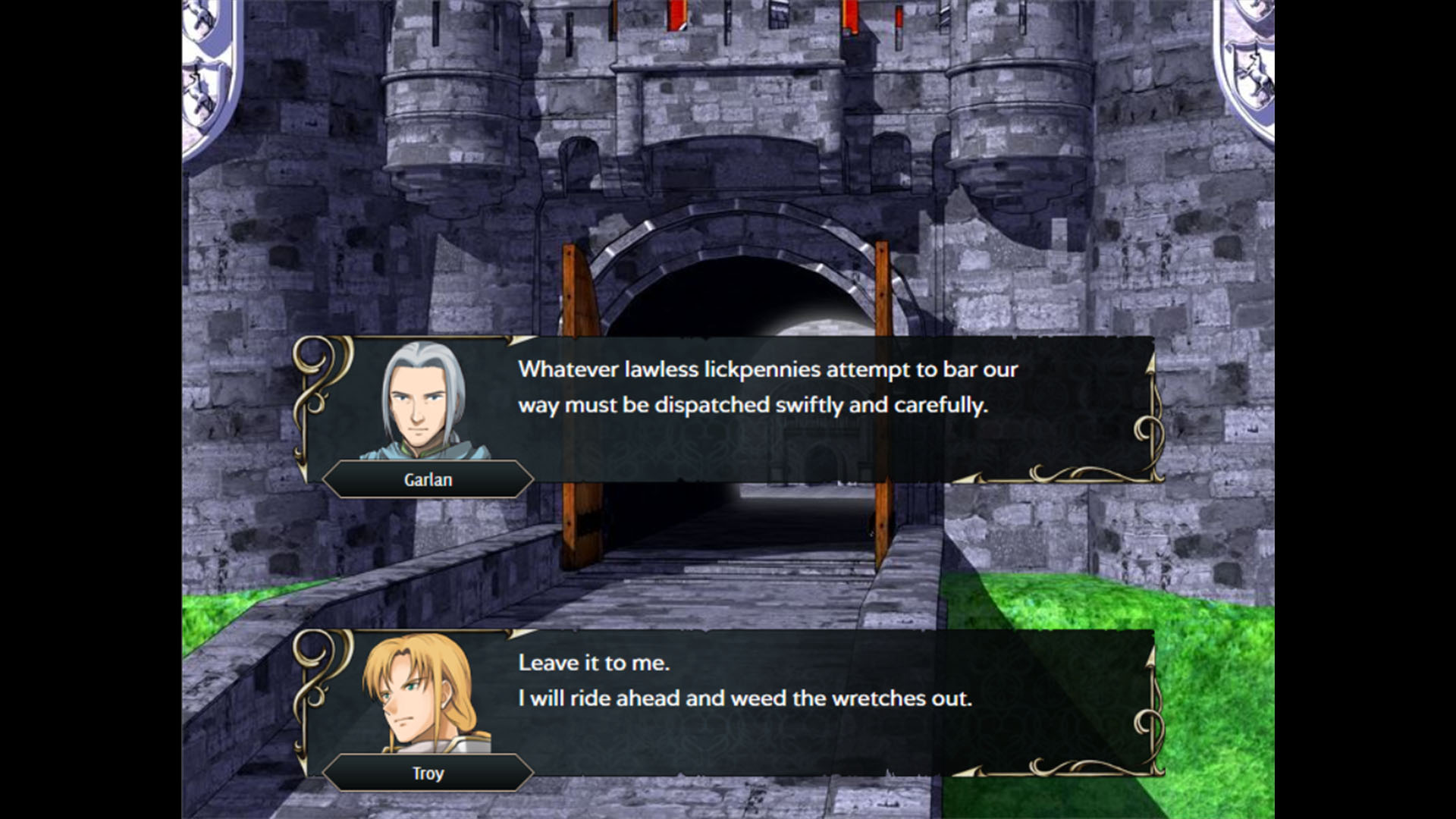 Vestaria Saga is a merciless game. It can be wonky. Unpolished. Occasionally frustrating. But I know a particular subset of players won't care, because this is a new, old, Fire Emblem, and nobody but Shouzo Kaga makes games like this anymore. Have fun with it, then, if you suspect you fall into that group. Enjoy this beautiful mess.

Now, can someone else make a spiritual successor to Ogre Battle, please?