This was no fun to write. I went to Voyageur excited to see how the space exploration text adventure came together, to find that it really doesn't. Here's wot I think:

Voyageur's core premise asks a question: If you could travel through the stars, to regions never before reached by humanity, but you could never come home, would you do it?

With the discovery of an ancient alien technology, from a long-dead species, humanity discovers it can build small spaceships that travel unimaginable distances. These Descent devices have a catch, though: they can only travel toward the centre of the galaxy. And since they'll quickly take you beyond the reach of Earth's current space travel, there's no returning.

So would you go? Would you head off into the unknown, to explore the universe like no one else ever has? And would you do it if you knew you could never tell anyone? Never share the experience with friends and loved ones, nor pass your knowledge back to the human race you left behind? It's that second part that trips me up. The idea that everything I'd discover, everything I'd learn, would only further deepen my sense of isolation. What is experience if it's not shared?

The problem is, this isn't a question the game is even vaguely interested in asking.

Voyageur's initial decision assumes you've already robotically abandoned everything. This illustrated interactive fiction (elevator pitch: 80 Days but in space) was originally released on mobile earlier this year, but has rearranged its whole design to suit the horizontal PC screen. At the start, it asks if you're on this journey to "explore", to seek "adventure", or to "escape". That choice influences your statistics and your background as you begin your journey, although it's hard to discern what, if any, real impact it has. It's a journey rich with opportunities to make money, explore some fungal forests, and... make more money?

A lot of the game is focused on trade, because you're going to need to make money to continue your voyage somehow. This first appears interesting, and the game suggests that if you were to invest in some of the most commonly traded goods in one star system, then travel far enough away, they could become exotic and rare specialities, with high prices fetched. Except, in execution for me this didn't happen. Almost everything I bought fluctuated at random as I travelled, generally pointing upward such that it became impossible not to become unfathomably rich without really trying. And indeed the same items were found in star system after star system after star system, seemingly only gaining value because I was holding them. Identically named items were fantastically cheaper to buy in the same markets that'd buy them at ludicrous prices. (You can't buy and sell the same item on the same planet, to prevent that obvious cheat.)

The economic model doesn't even extend to any sensible notion of selling to rich economies, and buying from poor ones. Even if you offload your hangers in a planet described as being in an economic boom, you might as well buy everything there too, since you'll probably sell it for a 100% profit on the next planet anyway.

But you also need to be aware of the risk of pirates on your journeys, and how a lot of very valuable cargo might see you losing everything should you fail to escape or win a fight. Something that is, as far as I can tell, completely random, and dramatically skewed to allow you success. You don't get to make meaningful decisions in a fight with pirates, just click "fight" or "run", and since "fight" wins 19 times out of 20, you don't even think about it. When you lose, and your cargo is taken, there's nothing you did wrong, nor anything you could have done to help.

Added to this, you have to pay for repairs and supplies, which would be a neat way of balancing your increased wealth if only they would scale along with your progress. Instead what are briefly prohibitive prices at the start quickly become irrelevant back-of-the-sofa change. Who cares if supplies cost 250 Space Bucks for 50, if I've got 45,000 in my pocket? I may as well buy 500 of them and ignore the notion.

Planets also offer opportunities to hire new crew members, improve your ship, explore the local area to forage for loot, and perhaps even slip into a more illicit location to pick up some less-than-legal cargo. For a while. And then these extra options just stop. You can hire a crew of five others, add two items to your ship, and augment your physical body once. Those things done (and you will do these tasks in the first few minutes) there's absolutely nothing else to follow. Even though you'll still find there are jumps too far for your current engine to make, it never offered me a chance to do anything about that for the last 90% of the game.

It gets more peculiar. Crew mates, you're told, have distinct personalities, and will need you to behave in specific ways to keep them on side. But at no point does it tell you what their personalities are, and when they do have a problem with your authority (seemingly at random), it never tells you why, nor indeed offers even a notion of a means to address it. Instead random events that occur out of your control seem to appease them. It's bonkers. 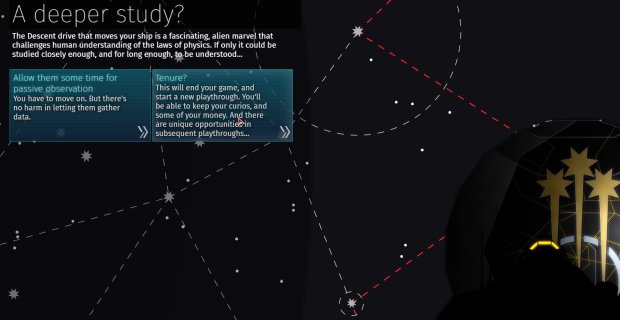 There are various other things to do on planets. Those that sport fungal forests allow you to "mount expeditions", which is to say, buy a bunch of supplies, then click "Okay" until they run out or you find a special item. The obvious notion that continuing an expedition would come with increased risks, each next step more likely to see something go horribly wrong for greater reward, is entirely absent. Other planets have junkyards to search, which do offer the idea mentioned above, but only for two or three clicks, and there's no sense that not taking the first find and retreating is any great loss.

Each of these ideas come with story threads, which will let you sort-of pursue different beats and thus a different ending. You're also constantly gathering stats as you go, so much so that when I'd finished I had a screen of 30 or so different statistics, but I absolutely couldn't tell you what any of them had to do with anything. I imagine some of them meant I could access the end-game plot beats, but not in a way that I noticed as I played.

The writing often offers pleasantly poetic descriptions of planets, that make it more interesting than just a list of environmental stats. On arrival on Pristina I am told:

"Geodesic dome habitats arranged in a circular pattern form a village of dwellings connected by underground tunnels. All around, the signs of ongoing terraforming are evident; every habitat window is fitted with an AR view of how Earth-like this world will be in a hundred years. The air here is fragrant with floral scents from Old Earth, their pollen as much an irritant now as thousands of years ago. Warm air and loud conversations emanate from cafes open to the habitats."

The problem, however, arises two planets later, in a whole new system, when I arrive on Nereus 287 3 and I'm told:

"The air here is fragrant with floral scents from Old Earth, their pollen as much an irritant now as thousands of years ago."

There's a ton of different descriptions, to be fair, but it becomes quickly apparent they're a game of consequences. Or like one of those kids' books where you turn the flaps to make different weird animals. After a certain point, their randomness offers no narrative meaning, and you stop reading them. And after a longer while, I stopped reading almost everything in the game, having read it all so many times before. I realised that I only ever needed to read the text generated by clicking on the extremely rare yellow options, because everything else is repeated ninety billion times and has no bearing on anything. I even stopped reading the descriptions of items in the markets, just clicking on the numbers because I knew they'd get higher no matter what I did.

Which is to say, this is a piece of interactive fiction that can be effectively and successfully played without actually reading it. The systems are far more important, the text just pretty randomness scattered over the top.

I realise I've just laundry-listed every element of the game, and what's wrong with it, but that's the agony of Voyageur. It feels as though it's going to be this 80 Days-like story, this narrative journey into unknown space. But instead it's a fruit machine with very occasional story beats, and alternative ways to bring it to an end. The reveals on the scant story aren't surprising or meaningful, and the main narrative ending is just a damp cloth of nothingness. Which is so maddening, when it begins with this amazing premise it doesn't seem to even notice, and then entirely fails to deliver on any sense of going beyond the reach of humanity - not least because almost everywhere you go, humanity's already been there!

I think if Voyageur's systems came together, if the stat gathering felt meaningful, if you could relate to the crew, if you could deliberately pick a path through the universe, if you could pursue distinct goals, then all these disparate and ultimately broken elements could be something special. But the reality is, it's an IF you can play without reading (please note, I read it, a lot - the point remains that it's not necessary), so formulaic and unchallenging is the process. Which is a proper shame.

Voyageur is out now on Windows, Mac and Linux, for £5, via Itch