Warhammer Underworlds: Online is an adaptation of the tabletop game that its publisher Games Workshop calls a "tactical arena combat game". That's a fair summary, but I'm struggling to come up something more detailed that isn't kind of negative. I'm finding it hard, to be brutally honest, to care about it much one way or the other.

Underworlds Online is, as far as I can tell, a pretty direct and faithful adaptation, which is part of where my problem comes in. I don't know how much of my problem with the game is down to something being lost in translation from tableland, or whether the design itself is a bit lacklustre. At the time of writing, only bot matches are available, but they did an adequate job, and I don't see another player making a vast difference unless you have a prior relationship, which doesn't count. 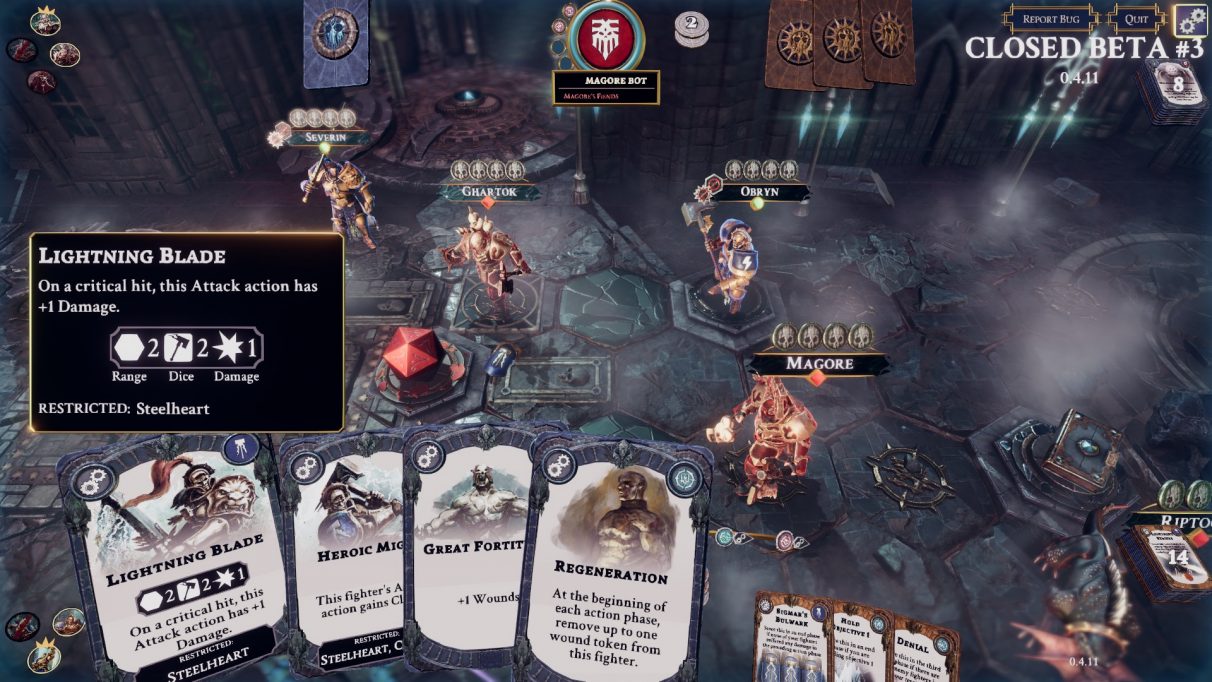 What it does is pitch two teams of 3-6 figures (depending on what flavour of stabman you're into - there are four included thus far) into a small hex based arena, across which you take turns to scatter a handful of objectives. They fight over three rounds, each divided into multiple phases, during which players occasionally move or attack one of their fighters, but mostly faff about with cards. There are cards and dice aplenty, but the basic rules are much easier to understand than is typical for the genre, particularly games that include both. On the face of it, each side having two decks to draw from sounds like a rules nightmare, but it's pretty manageable.

It is quick to pick up, I'll give it that. Sure I had a period of confusion about some details (mostly the order of play), but the general idea was easy to grasp and it wasn't the exhausting rules labyrinth card-based games and wargames alike can become. Some details still elude me, like an occasional "wait, how did I dodge that?", and it's occasionally not clear whether you're supposed to be choosing cards to play or discard (mostly when you've gone to the bog, because turns are timed and there's no pause function). But there's minimal number crunching, and the short rounds and limited actions prevent those situations where the most experienced player is too busy chaining together elaborate overpowered moves to notice the other is having no fun. It explains itself well enough that you'll know what you're doing within a couple of games, while leaving room to learn and practice the playstyles of each team. And games fit comfortably under half an hour at most. 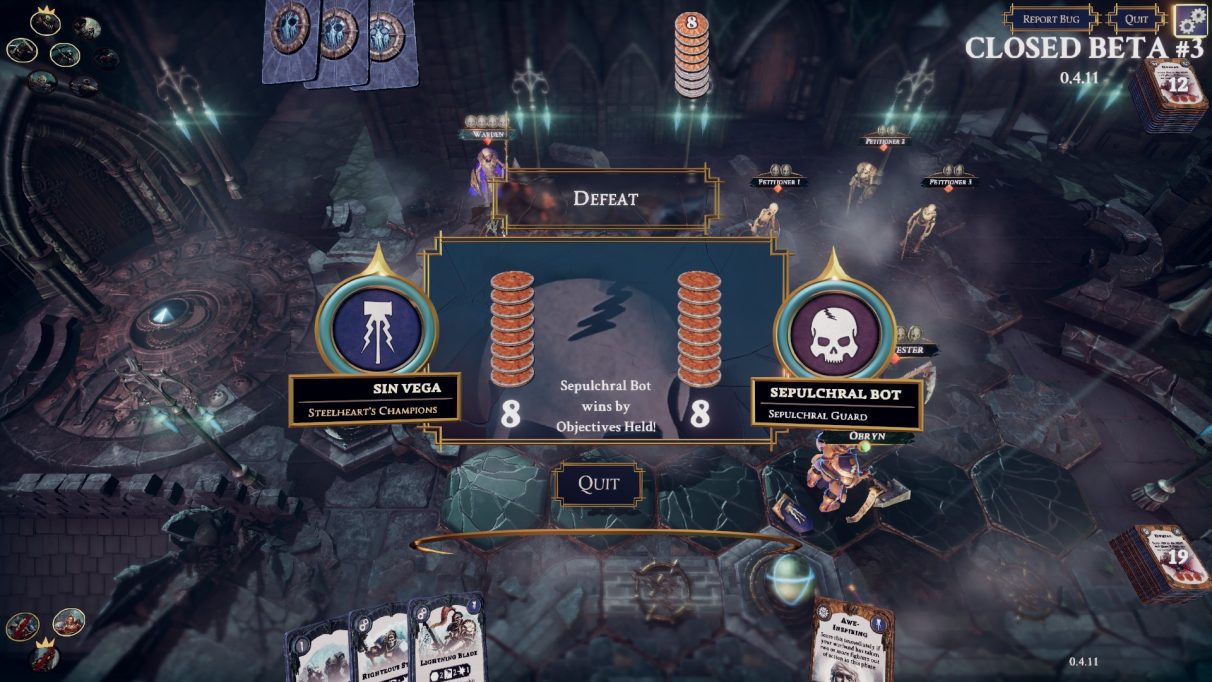 Each team draws cards from both objectives deck, and a combined gambits/upgrades deck. The objectives determine how and when you'll score points. Some teams are prone to occupying objectives or keeping opponents out of their territory, while others are better served by killing or simply moving and charging a lot. Whichever faction you choose will have its own set of 20-23 cards, from which you choose about half to make up your deck. Some items overlap with other factions, mostly generic things like healing upgrade cards, or "hold objective [1-5]" cards. Others capitalise on your faction's nature, so orcs can sometimes score points for a "good scrap" by losing fighters, and the fragile but 6-strong skeletons can score by surrounding opponents or even getting resurrected a lot.

The problem is... I didn't care. I won some games, I lost some games, I had several draws that were decided based on one skeleton standing in a particular spot. I got crushed more than once, I cleared the board of enemies now and then. Stuff happened, there were cards. I got better at the game, and pulled off some nice maneouvres, but I still didn't feel much of anything, win or lose. I like the animations, particularly the way skeletons crawl out of the ground and orcs leap from the sky and roar when placed, and the way figures stagger back and disintegrate when killed. But even wiping an opponent out without losing any of my people felt underwhelming. 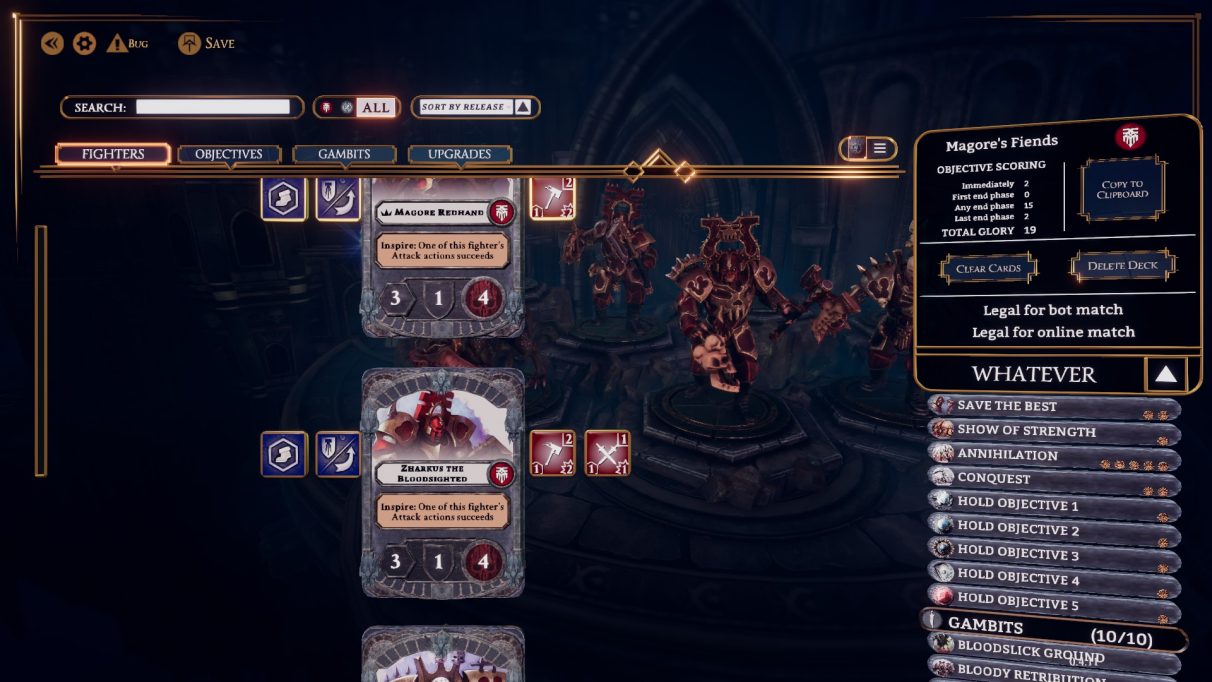 I get the idea. The element of randomness you get from drawing your objectives from a deck makes for a more dynamic fight, particularly over multiple battles. The singular focus on victory points is meant to reward strategic thinking over sheer violence or preservation of forces. That would work well in a game that actually had a strategic or story layer, but here there's no context. I have no stake in the fight.

Losing is slow and boring and often a foregone conclusion. Winning isn't much better, and battles usually end before they feel resolved. I just don't like the design tbh. I won a game that I thought was a draw because we both had 6 points. But it turns out I won because one of my orcs was standing on an objective (these otherwise count for nothing unless someone draws the right cards). Things that surprised me never drew a reaction other than "Oh. Ok". Sure you can customise the decks you draw from, but your fighters remain the same, and the only difference is in what objectives you might get, or whether you'll have a chance to make your stabbiest orc even stabbier, or a chance he'll get to lash out at his killer before he lands. Even the boards all look the same. 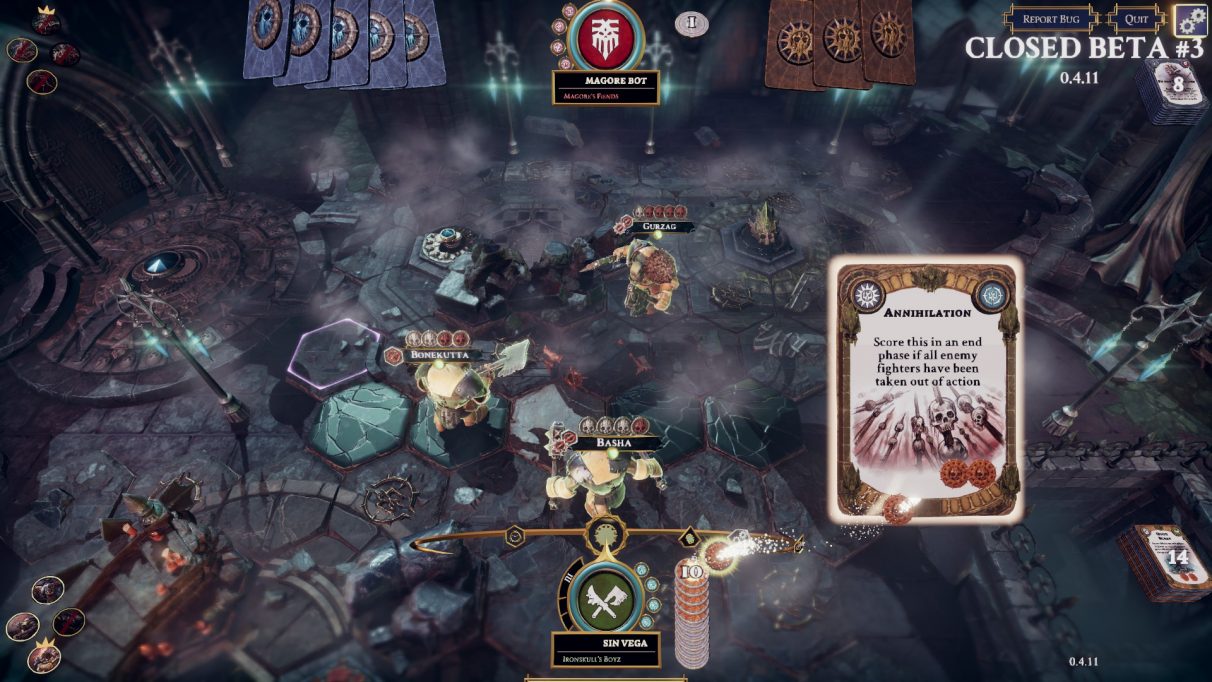 More than once I'd win a game that I'd have preferred to keep fighting. One particularly good scrap between my orcs and the shiny paladin dorks had got us down to 2 on 2, and my last objective card was 'kill everyone' but the last round ended so I guess we just... stop now. I had other games where my or the AI's team was wiped out early on, and the game just keeps going, one of you maybe faffing around for five minutes to see if you can nerdlinger a couple more points while the other one repeatedly skips their useless turn. I envision a lot of boredom quits. And maybe some rage when vanquished players accidentally skip cashing in their own victory points - you have to manually play cards for objectives you've achieved, or the points don't count. Maybe that'll be changed, but either way, I'd already started removing my headphones and reading emails on another screen within a day's playtime. 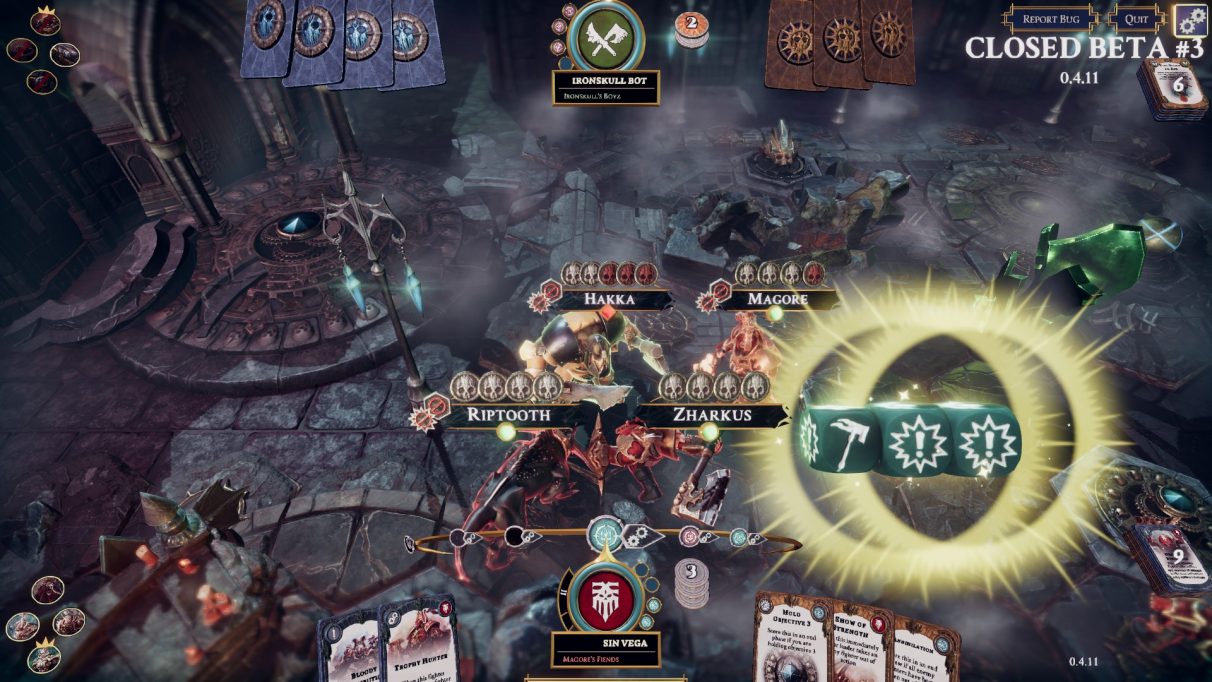 I feel somehow mean for being so down on this. I keep contrasting it to the original PC adaptation of Blood Bowl, in which matches were an absolutely exhausting two hour slog at the best of times, with countless bugs, misleading text, and terrible UI decisions. But so much drama.

By contrast, Underworlds is technically sound (despite those UI annoyances and oversights, which I'd be shocked to see survive the 2-3 months of early access that Steel Sky expect) and vastly less demanding to learn and frsutrating to play. There's none of the gruelling two hour bladder tests of Blood Bowl, nor all that much waiting around between turns, although they could be a mite speedier. But I can't say much more than that about it.