Wartile's very much caught our eye lately, what with its environments which resemble ornate boardgame pieces carved out out of very expensive wood and hand-painted by master goblin craftsmen. Were this a physical game on Kickstarter, it'd surely have racked up $900,000 within about three hours. As it is, we're looking at a strategy-roleplaying game which sits in a slightly awkward place between turn-based and realtime. Behind that appealingly diaroma-like look, it's about a game about two things: where you place your viking units and how frequently you activate cards which trigger MMO-like special abilities. It's a curious mix of timers, spamming and collectormania, rather than the elegant and thoughtful strategy game its oh-so-tactile, chunky hexes suggest.

On the face of things, I admire the ambition inherent in giving a real-time game the aesthetic of a turn-based one. In recent years, I've played so many games in which I take turns to move a small squad around a small map, mechanically bashing foes to knock off a few hitpoints each time, and right now I'd need one to blow the bloody doors off to really capture me. I've still got Invisible Inc and XCOM and the delectable upcoming FTL follow-up Into The Breach to keep me happy, after all. 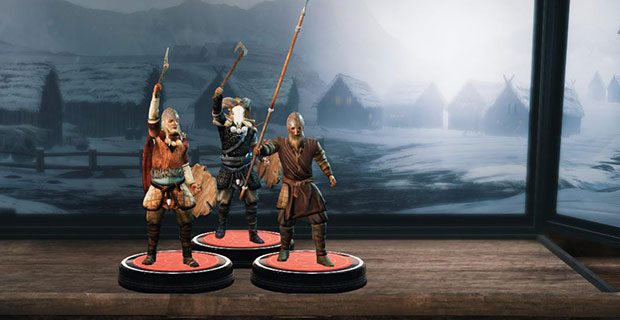 Wartile (which I forever hear as 'Wart Isle') is clearly determined to go against the stereotype those hexes and wee-small lads might imply. In practice, it's more like a mutant action-RPG, a Diablo or Dungeon Siege, in which the basic act of attacking happens automatically and at rapid but fixed intervals once you're within sufficient proximity of an enemy, while you trigger various special abilities to amp up damage or protect against wounds.

There's certainly something novel to having to manage hex-based terrain in real-time - your chaps won't attack unless they're directly adjacent to a foe, or wield a big pointy stick that can lunge across two tiles. It is like playing Civ without the benefit of think'n'wait - you have to commit there and then, but equally you can withdraw one of your squad to elsewhere while a fight's going south for them. A combination of being free to move your guys around and that, in the early missions at least, combat is fairly spamtastic rather than particularly tactical, means it's not especially frantic in practice. But it does feel awkward and even a little arbitrary.

I don't go into fights thinking "right, how can I handle this one?" but rather I just hurl everyone at everyone else and lob special abilities and hurling cards into the melee as required and as timers expire. There is a battle points system (replenished by kills and pickups) that discourage routinely activating some powers, and I imagine later missions will necessitate extreme caution about what's used when. I'm not sure I want to trek through many more of its routine quests to get to that point, though. So far they've all take the form of "go to the end of the map and kill/retrieve x" with an optional objective of "collect y amount of z" in order to earn bonus loot. It feels so deeply familiar, despite the genre cross-pollination.

Part of this is that the viking theme almost immediately tilts into monsters and magic, leaving Wartile without a clear identity of its own. Mission briefings and plot are cursory, with no real sense of place or theme - just some dudes doing what fantasy videogame dudes do. Oddly, I find myself reminded of the 2015 adaptation of Warhammer Quest, which was turn-based but had a similar mechanical anonymity. Basically, I'm slowly murdering monsters to afford more loot to murder more monsters with, and that's that. The viking stuff just evaporates - as, sadly, does the model-like look. I stopped noticing it about ten minutes in. 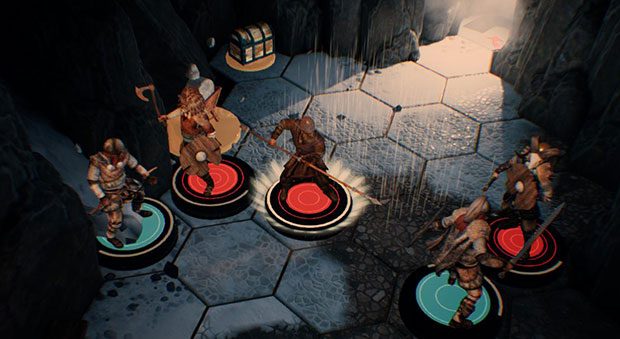 The epic sense the trailers lend it, with their slow pans around frozen models, like the credits of an Avengers movie, does somewhat exist in-game, but a) looks much murkier in practice and b) to get it you'll need to hit space to turn on slow-motion, which acts as a semi-stop for turn-based diehards. Once in a while it's made dragging a Heal card onto my most-wounded unit a bit less fiddly, but in the main it just introduces more frustrating waiting around. I spam it on and off depending on when and if I need to use special abilities. I'm sure it's going to be vital and potentially more thrilling in tougher missions, but I'm going to have to have a long, hard think about whether I want to put the hours in to get there. They seem like quite dreary hours.

Even outside of slo-mo, basic character movement lives in the grey space between real-time and turn-based, which in practice means you have to wait through a short timer before you can move a unit again, but the world and any enemies keep moving during this. It's a nice idea, in theory encouraging you to think rather than merely react, but in practice it's a drag. So often, for instance, my guy'll wind up one tile short of whatever thing I need to click on next, and I just have to time-out fruitlessly before a few seconds before I can get on with it. 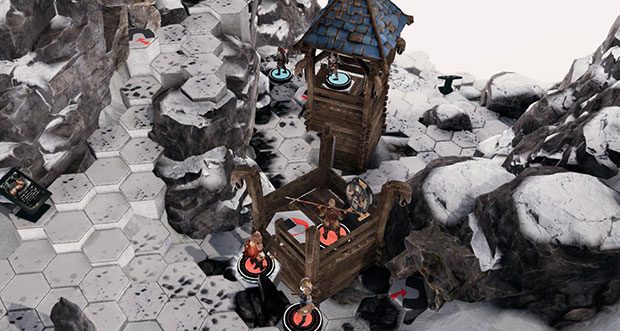 An age-old comment this, but I kept on wanting to like Wartile a lot more than I did, because so much about it feels like a game made for my tastes. Hexes and cards and armour upgrades that appear on your character when you equip 'em, and yeah, that living-wood aesthetic. I've got no complaints about the fact it's not turn-based - and the slow-mo option would render such grievances near-redundant anyway - - but I do think its real-time battles, mission structures or movement systems haven't been realised with much verve.

Wartile left early access last week and is available now on Windows via Steam for £15/$15/€15.