If you click on a link and make a purchase we may receive a small commission. Read our editorial policy.
Developer: Clifftop Games
Publisher: Raw Fury

You know what? Sometimes I'm just in the mood for a straightforward point-and-click adventure game. And while I'll admit I thought the opening of Whispers Of A Machine suggested this was going to be a big twist on the format, and was pretty thrilled by where it suggested it might be going, I'm actually all good with how clear-cut it eventually felt to play. Because there are almost none of these left, just an adventure game that that wants to tell a story. And this follow-up from the Kathy Rain team, Clifftop Games, does exactly that job.

I'm not being entirely fair, either. Whispers does do an awful lot under its hood that makes it pretty special. It's just, it does it all so well that playing through the game, you don't really appreciate just how cleverly it's doing it. This is a game that genuinely adapts to how you're playing it, changing itself based on the decisions you make, and thus playing entirely differently for each individual player. Except, as you play it, you'll barely notice it's doing it. Which is a huge compliment!

This is a sci-fi story set in a futuristic Sweden, in which you play augmented detective, Vera Englund. The world is post-AI. Anything containing a CPU is illegal. Humans live in the remains of the world, which has clearly suffered some significant cataclysm. And there's been a murder. Two in fact. You arrive in the small town of Nordsund, set atop some vast concrete spire, to investigate a situation that's embroiled in the politics of the area, and the history of the planet. 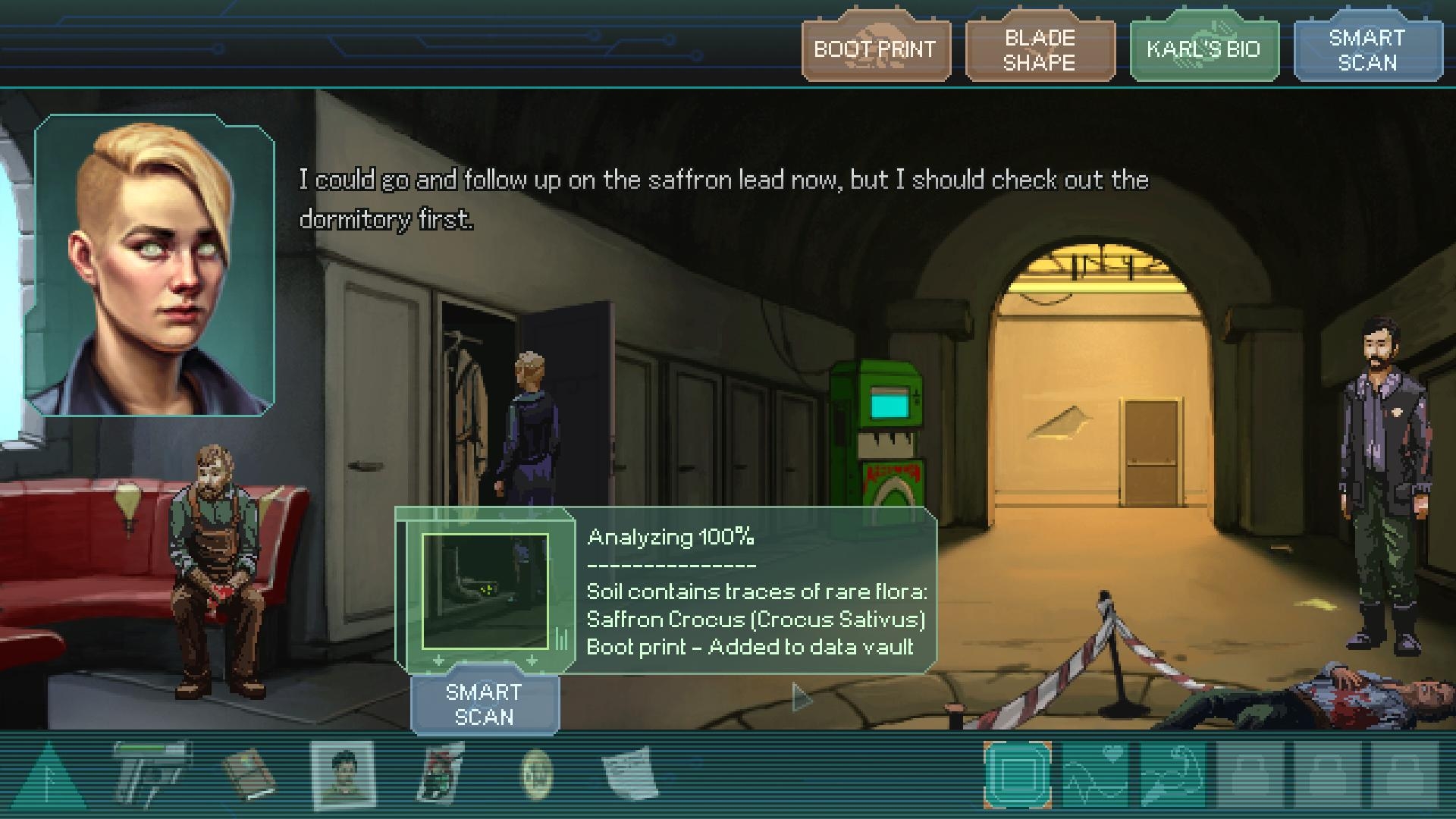 Immediately the game begins introducing its unique investigative tools, a result of Vera's cybernetic augmentations. (And if you're wondering how people can have such a thing in a world that's banned AI and CPUs, then so is the game.) Her abilities come via a substance called Blue, a nano-tech mystery that when injected enhances the host's natural abilities. Which is both the narrative and mechanical explanation for why the game adapts to how you approach it. From the start, Vera can scan a room for DNA and fingerprints, monitor the heartrate of witnesses and suspects for anomalous reactions, and enhance her strength. All of these are going to prove useful in the opening sequence, as you explore the scene of a murder.

What's so clever here is that even this earliest section is noticing which solutions you're discovering for puzzles, and which dialogue choices you're making, in order to shape the rest of the game. What's extra clever is I had no idea it was doing it (beyond an opening claim in the tutorial messages, but I've read enough of those to be cynical). It wasn't until after, when looking through the review notes sent with the game, did I notice the accompanying walkthrough offered multiple routes through just this area.

So why am I telling you, if I didn't know? Indeed, I've always made extraordinary efforts in reviewing to ensure the reader has as close to my own unsullied experience of playing a game. But here I genuinely believe knowing it's for real, knowing it really will adapt to you, will enhance the experience.

The result of your choices is which new augmentations unlock via your Blue as the game progresses, which will mean you approach the rest of the game's puzzles with a different focus to someone else who played differently. Which very cleverly means that while each puzzle has multiple solutions, it doesn't cause the game to become over-simplified by letting the player stumble into any one of them. Your choices determine what Vera is capable of, and thus how she deals with any given situation. 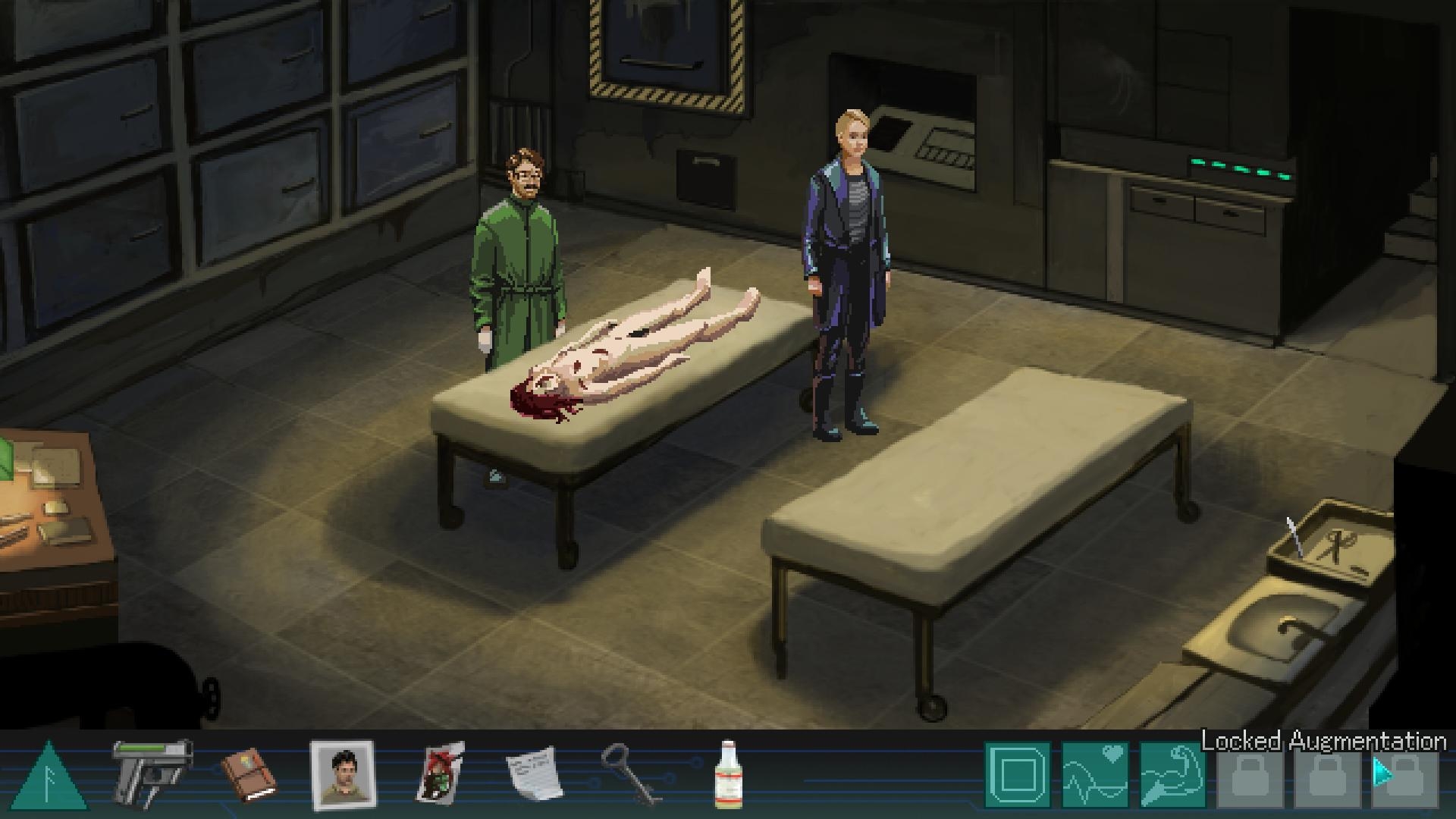 That is an awful lot of explanation for how Whispers is so clever and different, for a game that I introduced as being straightforward. And I think in many ways, that demonstrates just how good of a job the game does with the above. But, perhaps unfairly, has the result of presenting a straightforward-feeling experience for the player. Because it doesn't overtly present you with what you can't do (think Unavowed's ghosts, and how you can't talk to them if you don't bring Logan and KayKay), I always felt like I was only ever doing what could be done.

And that was good! It was a real pleasure to play through a well made adventure game, with an interesting story, and some excellent voice acting. I just didn't have a perspective on how clever it was actually being. 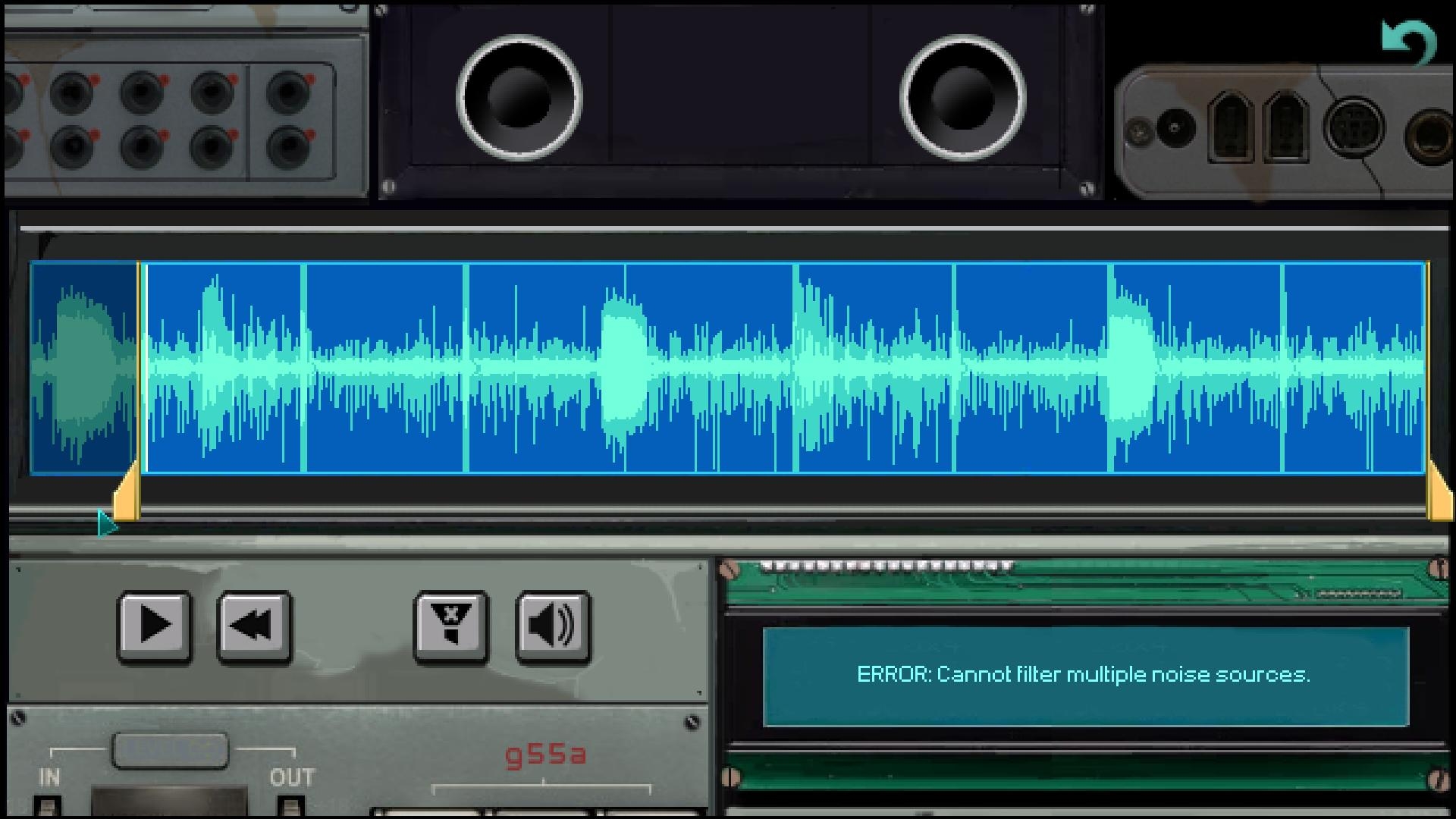 I also mentioned at the start that I was thrilled with where I thought it might be going. That was a reaction to the detective skills used in the opening scene, which suggested a game where my detecting augs would be front-and-centre throughout. I was a bit disappointed that wasn't the case. While you use them here and there, I tried them everywhere, and was disappointed by the almost entire absence of anything not directly plot critical. I don't really understand why there couldn't have been irrelevant things to find in most locations, rather than possessing a DNA/fingerprint scanner that almost never finds any of either anywhere. Also, the way the game remembers the details of any victims throughout made it a real shame that this was barely used - I'd loved to have solved a puzzle by astutely thinking of looking for a previous character's involvement later on. The same goes for the heartrate monitor, which is ludicrously under-used, and almost always automatically triggered when actually needed. I switched it on for almost all conversations, and it didn't even adjust to the characters' demonstrable moods.

There are also the usual adventure issues, like sensible solutions receiving "I don't know why I would do that" reactions. This is always a sign of a developer not having watched people play, to see the things they'll naturally assume, and then writing responses that explain why it doesn't work. And perhaps most significant in Whispers, I far too often had to resort to just visiting every location and speaking to every NPC until I stumbled on the right one to give me the clue I needed. It's a relatively small game by area, so it's not too much of a trudge to do this, but it's not exactly satisfying. (Talking of which, it really could have done with a map to let you hot-jump to locations - there's an awful lot of double-clicking on scene exits to move about.) 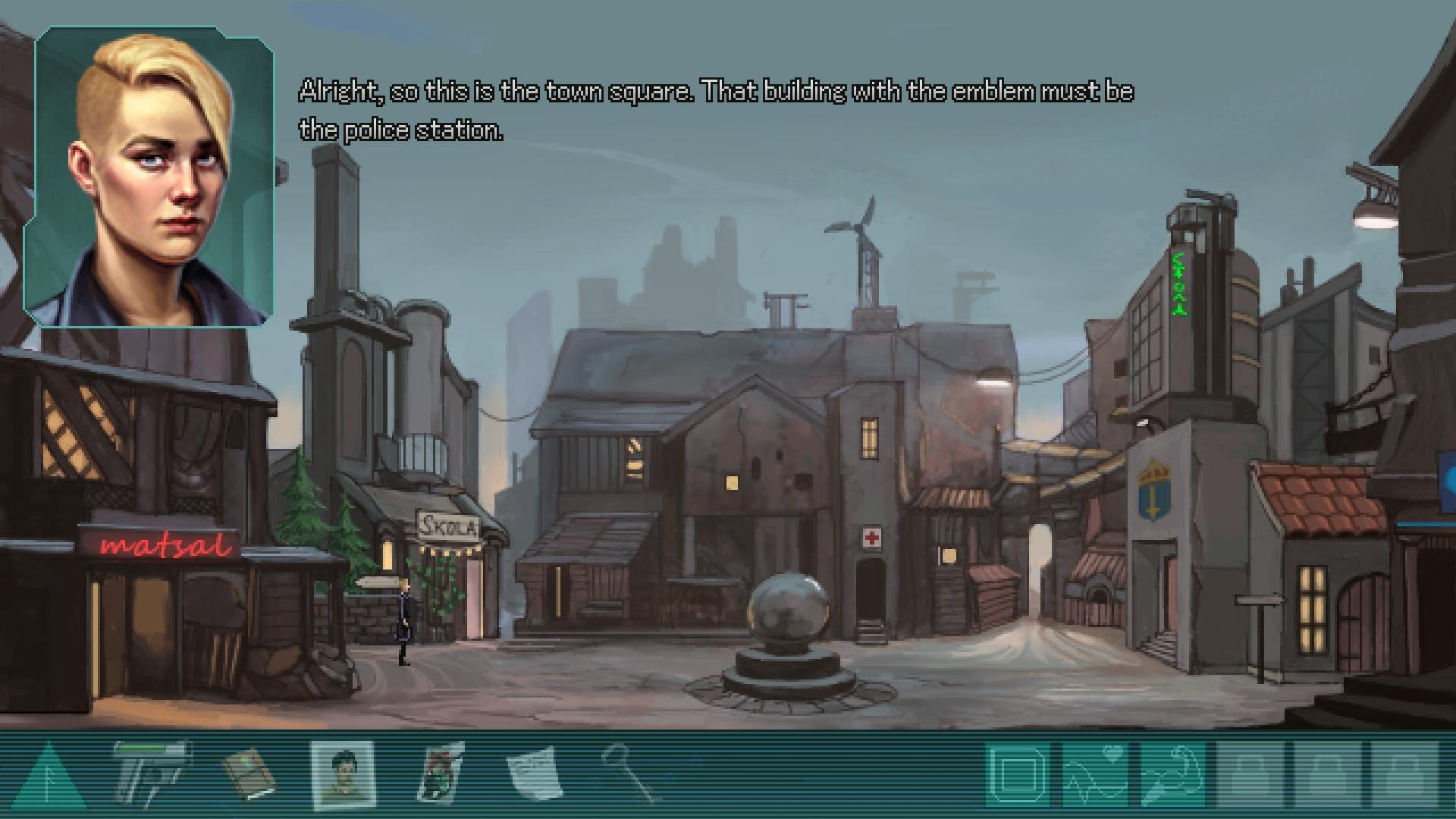 What a muddled review. Sorry. I'm complaining it's not as complicated as I wanted, while celebrating that it's actually incredibly complicated but hides it all superbly. Yet that's precisely how I feel about the game having finished it. I really enjoyed it, I really appreciated having a methodical, forthright adventure game to play, with excellent art and animations, good music, great acting, and a story worth hearing. I just wish I'd been more of a detective as I did it.

I'm also now intrigued to play the game again, and make different choices, look for different solutions to earlier puzzles, to see how differently it plays when I don't have, say, the ability to zoom in on distant details with my super-eyes. It's not a long game - it won't trouble you for more than six hours or so - so it's the ideal length to take a second stab at.

So yes! This is a good adventure game! It's actually an incredibly clever adventure game doing lots of very subtle smart things! It has its issues, but don't we all.