2018 has been strange as hell, I think we can all agree on this. And yet, some bits of news can be even more baffling than others, the definitive proof we are living in the weirdest timeline. Our world may be literally burning, everything is a mess, and The Brexit still looms upon us. But thanks to popular hits like Del Toro’s Shape Of Water and the adorable anime The Ancient Magus’ Bride, lusting over a fictional monster on main is now deemed socially acceptable.

It’s not only a matter of lust. The star of the Venom movie, for example, is being advertised in China as the perfect partner for a woman: strong, gentle, caring and reliable. 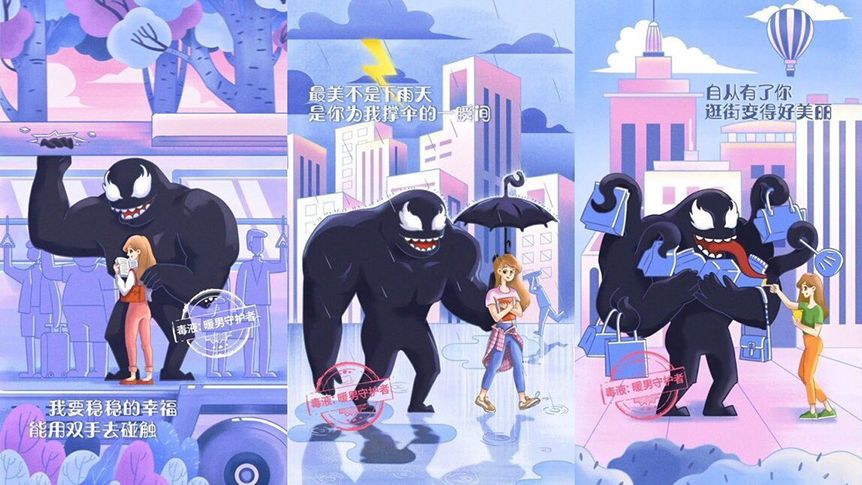 It’s such a perplexing campaign, one might see it as a joke. Do women really want their boyfriends to be tall, slimy and full of teeth? Or is this trend an exasperated reaction to the #metoo movement? An ironic “men are bad, so we’re dating monsters now.” I don’t think so. Stories (and videogames!) about dating the undateable have always existed: they have just become more obvious lately. But why?

A big factor in our fascination with monsters, I think, lies in the gap between a monster’s feral appearance and his caring nature. In the (NSFW) countless games and anime about romancing monster girls, the love interests tend to have inhuman features stitched on a human-looking body. Sure, monster girls may have a tail or bat wings, but you can bet they will also have a pretty face and at least one pair of jiggling boobs. Monster boys, on the other hand, lean more towards the grotesque. We want them to be all spiky on the outside and sweet on the inside, like chestnuts. 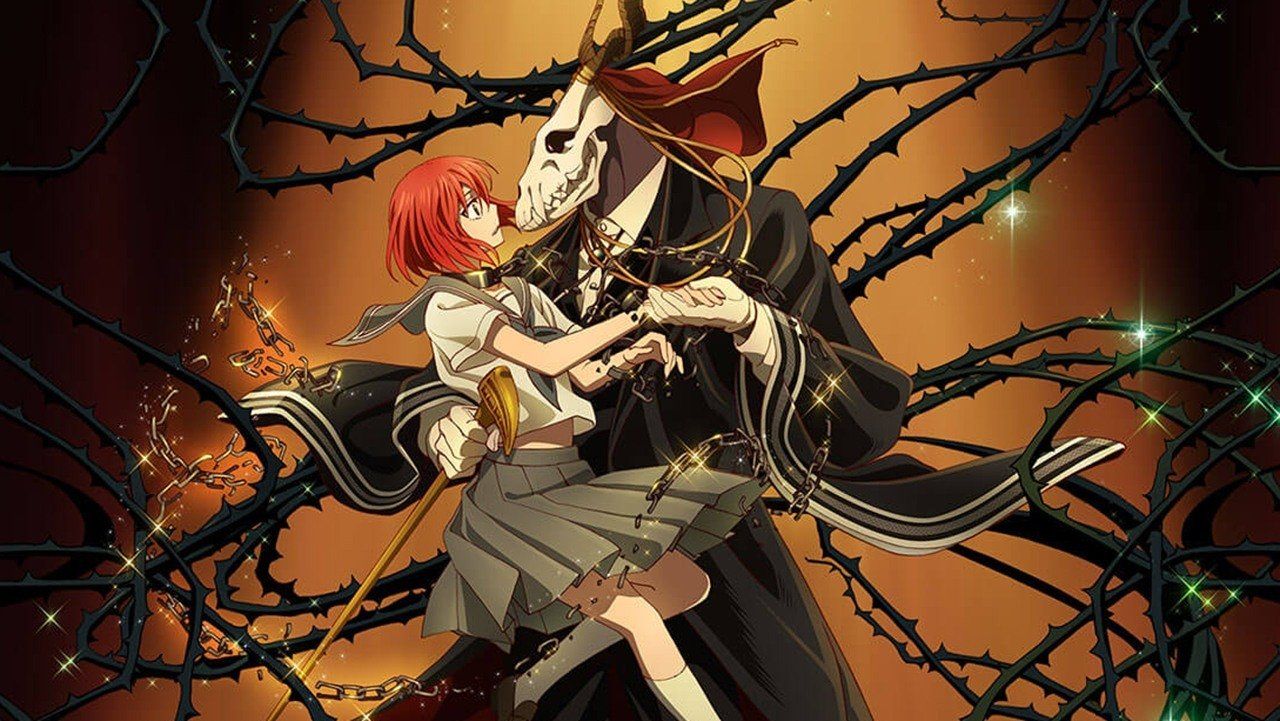 Women are told from a young age to be wary of men. They can assault us, kill us, or even hurt us without really meaning it. Monster boys have big threatening bodies, but are also overly self-conscious about their physical strength. Most romances with them center around a desire for intimacy, hindered by their fear of accidentally hurting their partner.

Think of Twilight (yes, vampires count as monsters, even when they sparkle): the biggest source of drama in the story is Edward’s fear of hurting Bella during sex. It’s an absolutely laughable plotline, until you start thinking about how messy, confusing and traumatic sex can be as a teen, especially when you’re a girl, especially if you received no sexual education, and sex is seen as something you have to endure, not to enjoy. No wonder the story struck a chord with teenage girls, enamoured by the idea of a guy being concerned about their pleasure and well-being for once. 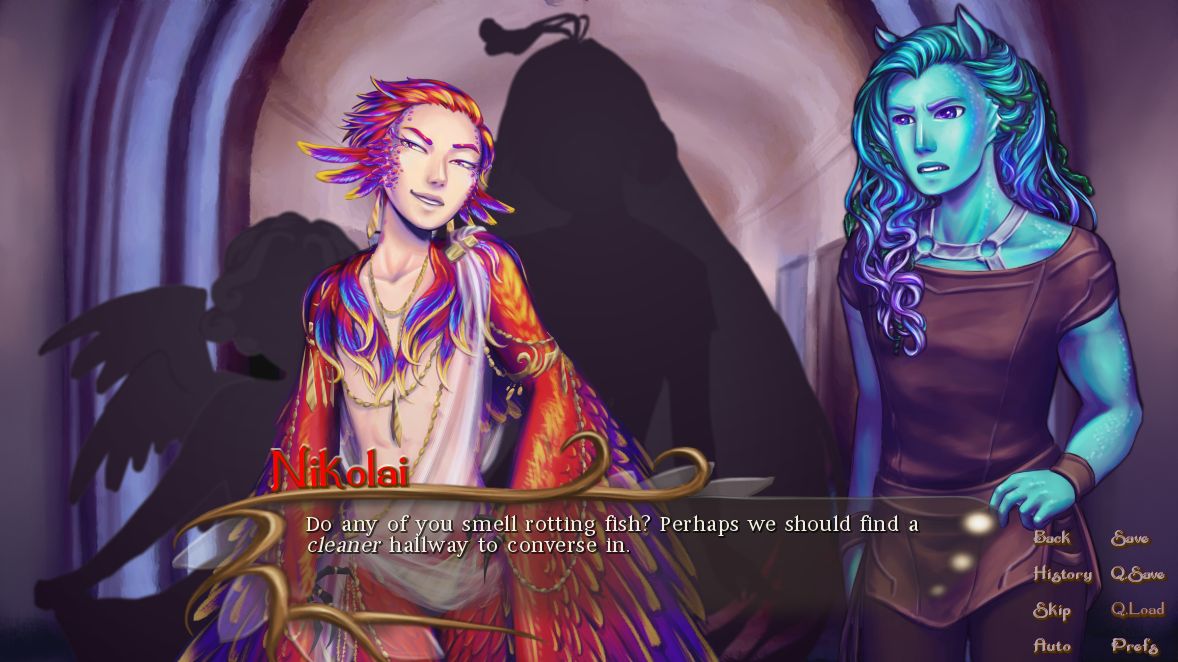 In games where civilization is composed entirely by supernatural creatures, monsters lose their threatening aura and become a way to comment on our world. In Monstrata Fracture, for example, fantasy species embody different social classes. Avians are high-born, rich and snotty; bunnies represent the working class, and often have too many children and not enough money; Kelpies are thugs. The idea of shape-shifting monsters is briefly contemplated by the human protagonist, but their monster pals react with horror: the idea of changing shape, and therefore your role, is seen as a threat to society itself.

In Monster Prom, a Yawhg-like about finding a partner for prom night, each monster is instead the exasperation of a school trope: the werewolf is a jock, the vampire is a hipster, the mermaid is the snobbish queen of the school. Their monstrous traits are extensions of their personality, not a stigma. 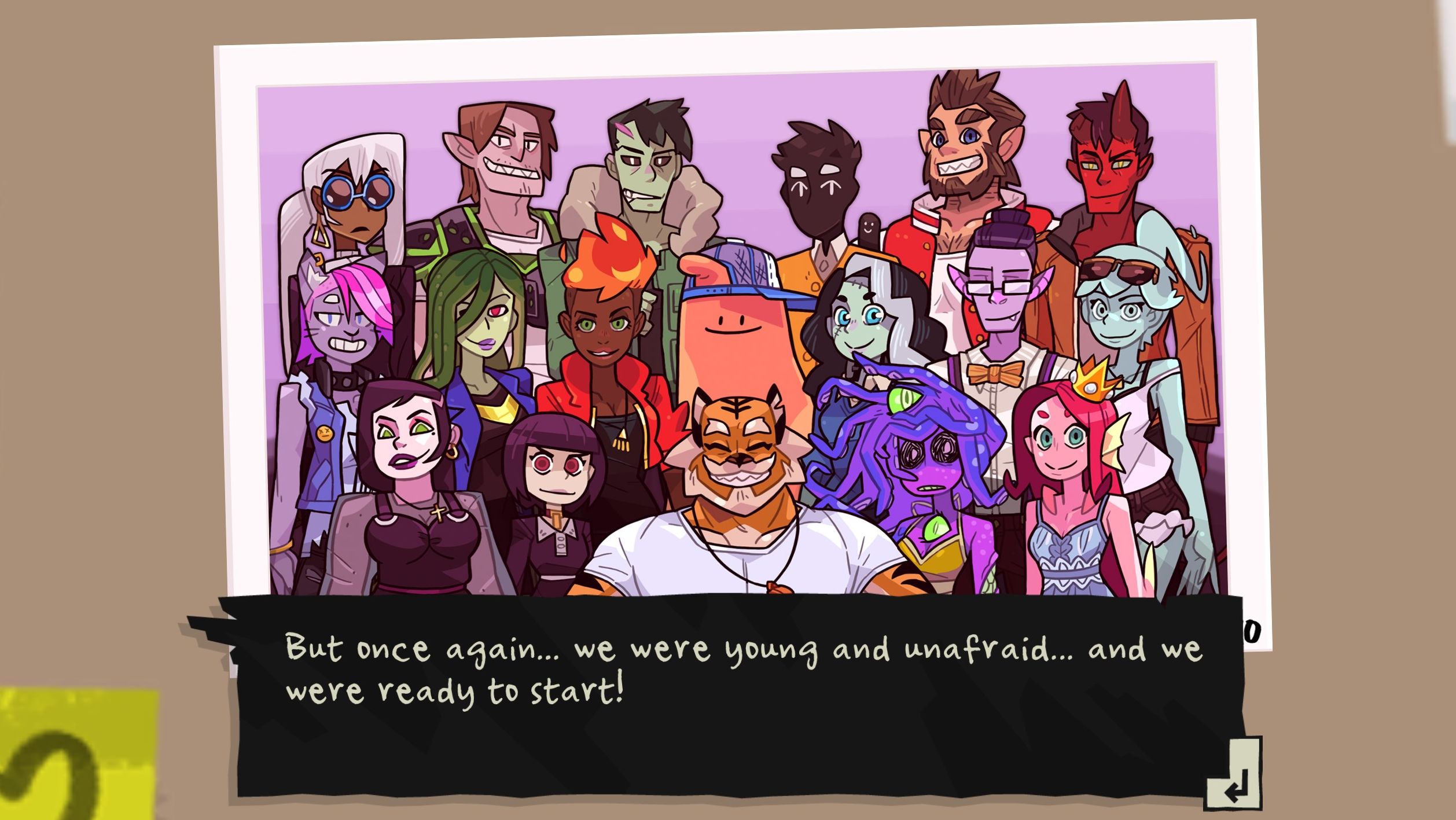 Put a monster in a world populated entirely by humans, though, and you get Beauty and the Beast: the monster is seen as an outcast, lonely and misunderstood. To shy, nerdy teens, such monsters can feel more sympathetic than fellow humans.

It feels almost mean at this point to mention Genderwrecked, a visual novel about meeting different creatures on a quest to discover the truth about GENDER. The creatures of Genderwrecked aren’t real monsters: they’re reflections of the authors’ experiences about living as a queer person. They’re deformed and desperate because society considers them so. For as much as I like the game, I can’t help thinking: it would be wonderful for queer kids to live in a world where they don’t have to see themselves as monsters. It would be wonderful if  games could help make that happen. 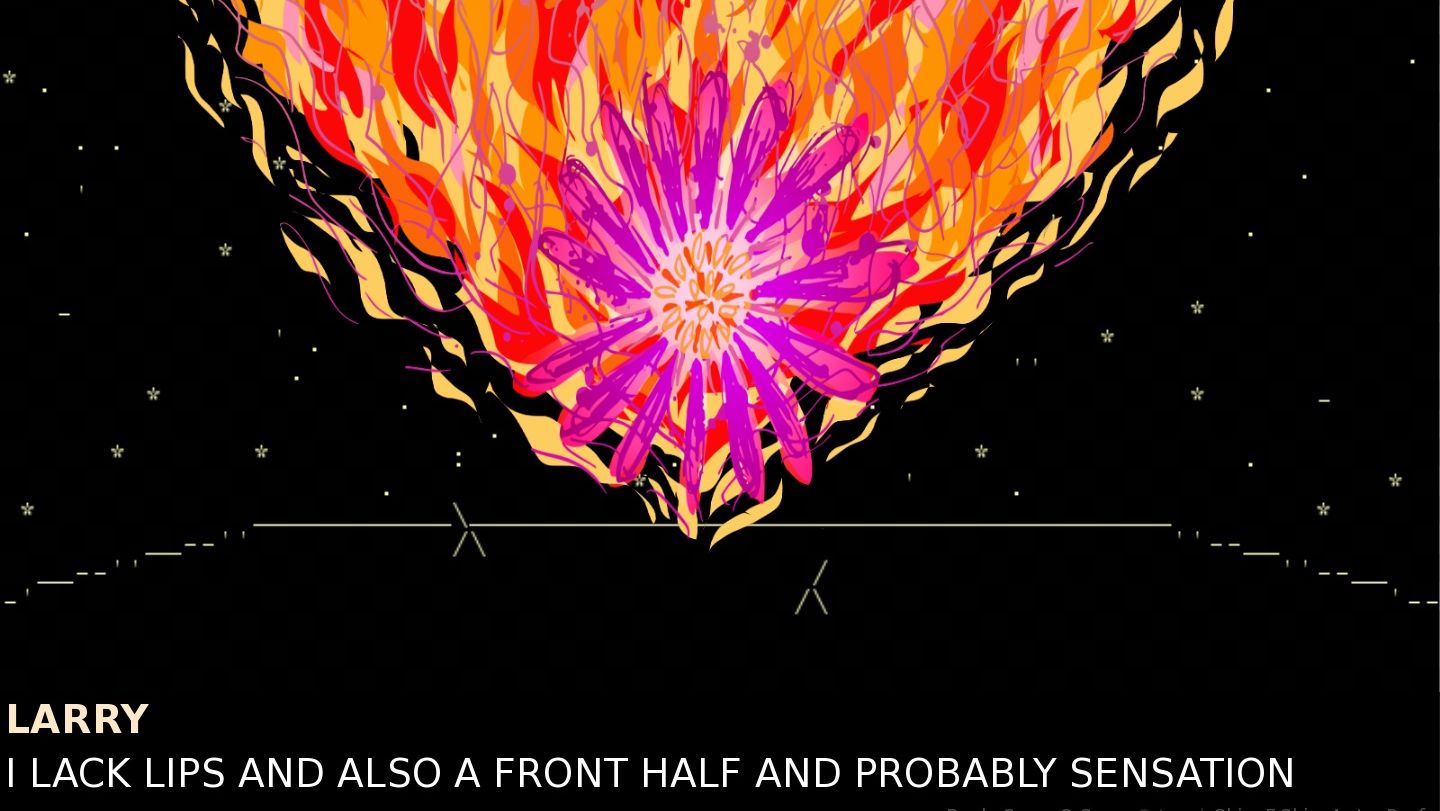 Being outcasts, monsters usually lack knowledge of social norms. They may offer live lizards to their humans, like overexcited cats, or stare at their partners while they sleep. Their cluelessness may cause harm, embarrassment and discomfort. But in their ignorance, monsters can also be terribly inclusive.

Monsters don’t have an issue with the shape of your body, your quirks or your preferred pronouns. They may not be interested in sex, or come from a society where polyamory is the norm. Monster stories help fill the gap between the heteronormative relationship you usually see in media and the range of unusual, messy relationships people experience in real life. But most importantly, monsters don’t judge you in the way humans usually do, comparing you with others to decide which parts of you are “normal” and which are not. Where you see a broken mess of a human being, monsters only see a person they love. 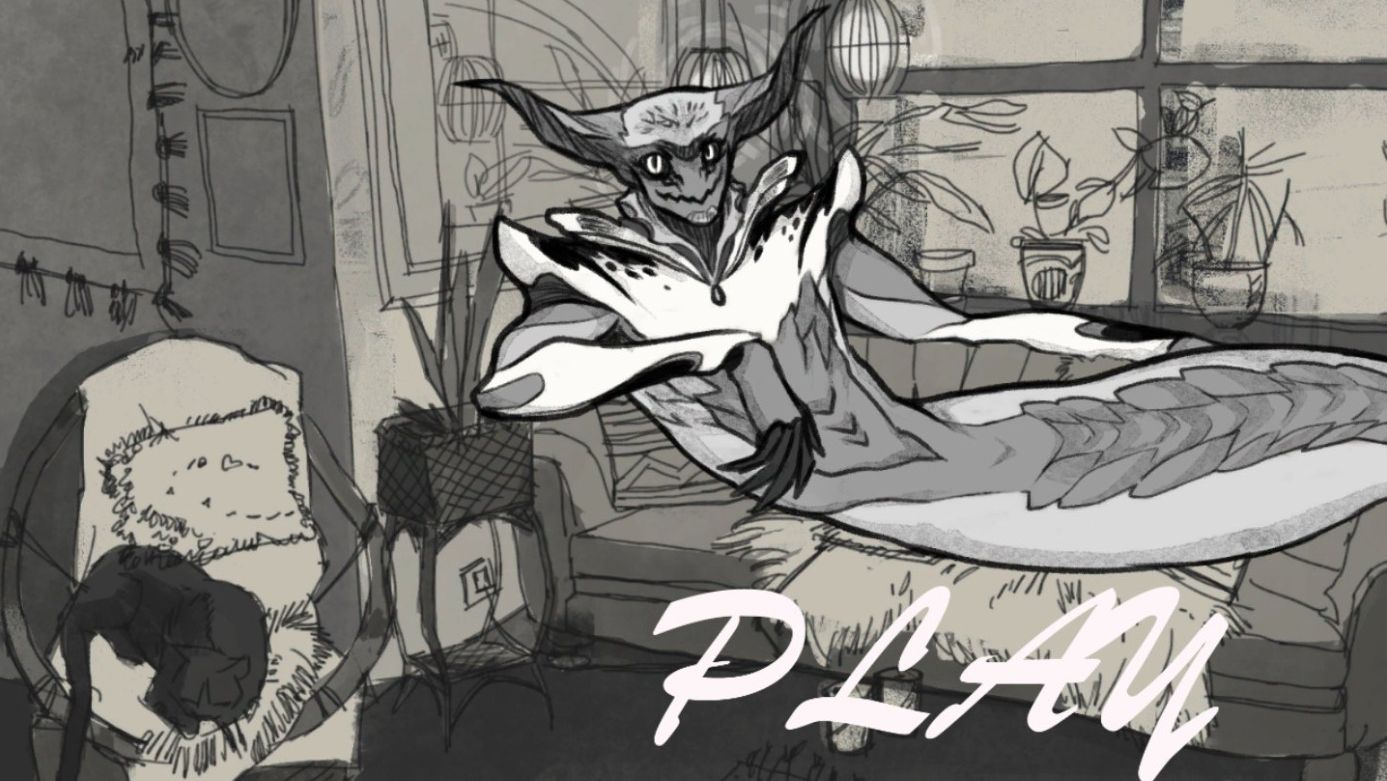 Their naiveté can also extend to the workings of a human body, allowing creators to talk about body positivity. Take Monster Lover, a student prototype about a date with a snake creature. You play by stroking the unfamiliar creature with the mouse, trying to discover what kind of actions feel good for him (touching his horns is a big no) while also trying to pleasure yourself. It’s a game about getting familiar with a body different than yours, learning each other’s boundaries and turn-ons. This kind of communication is extremely important between partners, but we humans tend to avoid it due to shyness or pride. With a monstrous partner, there’s no excuse to avoid it.

Not all monster bodies are made for carnal pleasures, so in monster dating sims, sex isn’t always the endgame. Games like Speed Dating for Ghosts are about emotional bonds, giving a respite to asexual players — or in those simply not interested in matters of the flesh. In this, you have conversations with assorted ghostly fellas and go on dates with them. Some of the rendezvous are romantic, but most ghosts only want some company, or need someone willing to hold their ethereal hand while they do something difficult. Others just want you to help them rob a bank. 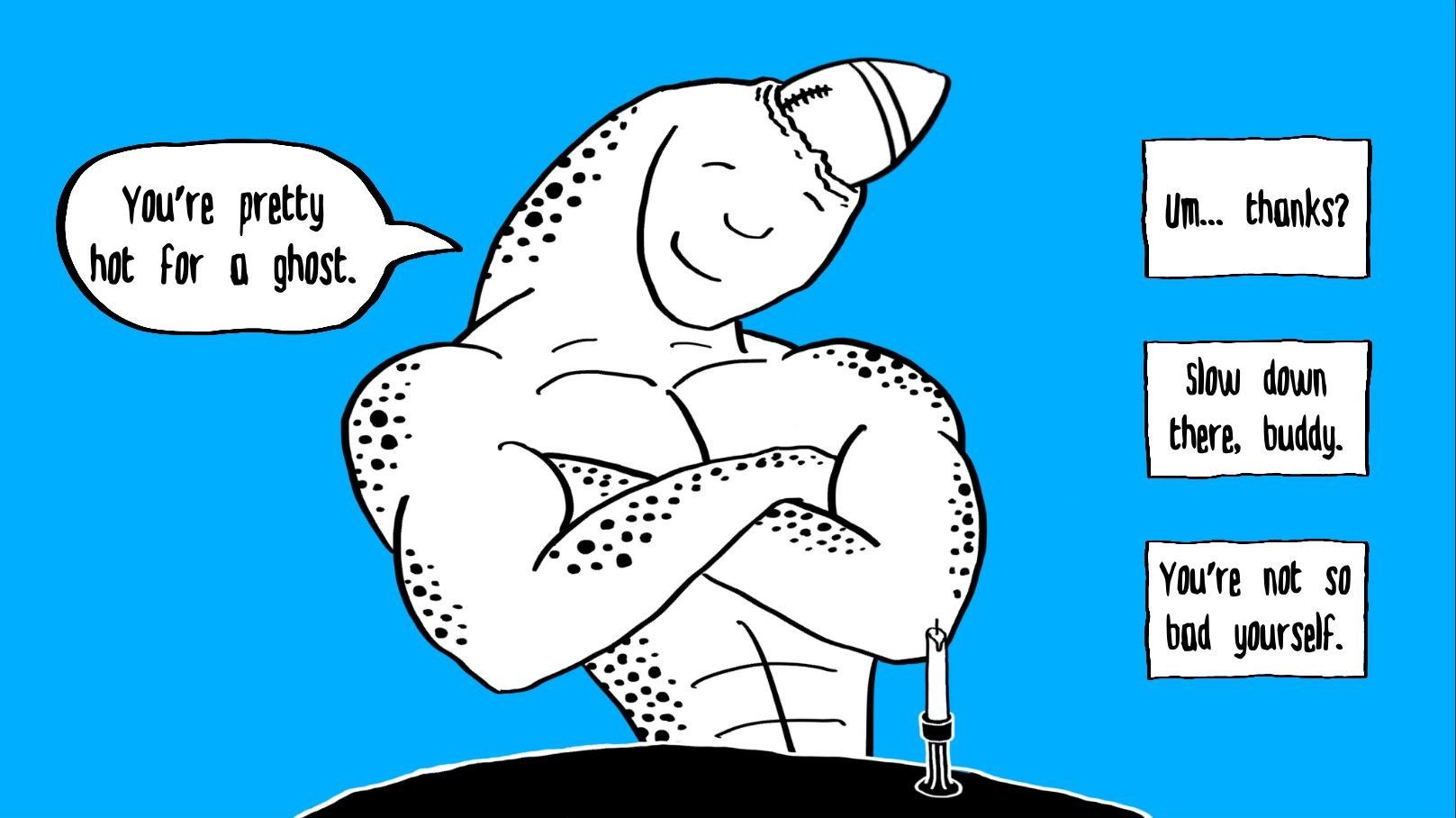 It’s a game about exiting your comfort zone to do something nice with people you don’t know well. It’s a concept perfectly encapsulated in this Gamasutra article by Zack Wood, author of the bizarrely delightful Monster Garden. To him, monstrous love is not strictly romantic, but it’s about “treating the unknown with curiosity and respect instead of the desire to destroy it in the name of protecting what's familiar”.

“Curiosity and respect”, plus a sane dose of terror, is probably what drives the players of Fallen London on their quest to smooch the unsmoochable. I won’t say too many nice things about the Fallen London universe (also including Sunless Sea and Sunless Skies), because I am friends with the developers. But I can tell you that those narrative games feature a wide range of inter-species romances, and that the player themselves can mingle with all sorts of stealers-of-faces and rubbery fellows. 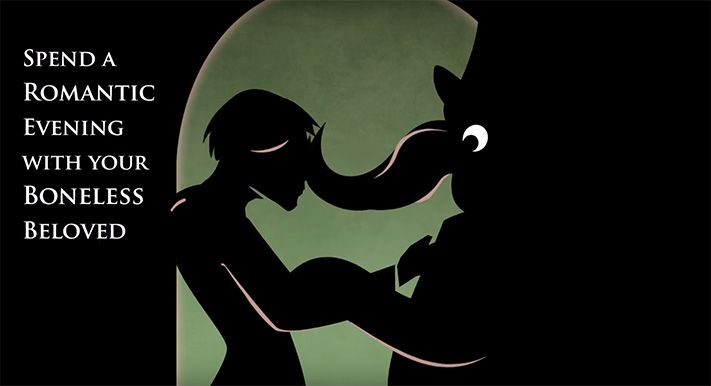 Fallen London is, at its core, a story about a space crab in love with the Sun. The game’s monster boyfriends are larger-than-life creatures, as alien and unknowable as Lovecraftian deities. Intimacy with them isn’t about creating an emotional bond, but about a fleeting moment of contact with something wondrous and unknowable. A close encounter of the third kind, but guided by love instead of fear.

In a world of horrors wearing human meatsuits, dating a literal monster can be a relief. When you choose to love a monster, you are already prepared for the worst. You both know you are different from each other, and your relationship will need to be based on communication and mutual understanding. But you also know that according to fairytale rules, monsters never transform into something worse. And if you treat them right, they can even become princes. We need to keep loving monsters because they can teach us how to be better humans.