Premature Evaluation is the weekly column in which we explore the wilds of early access. This week, Fraser's off to the 18th century to hunt a forest full of nasty monsters in horror FPS Witch Hunt. He's a very brave boy.

Find a bunch of trees and you’ll probably discover a folktale or ghost story set under their boughs. Years ago, I lived right on the boundary of some woodland that was meant to be home to a red-eyed creature that ate children. Walking back from school in winter, when it was already dark, was a nasty business. I’d grimly keep my gaze fixed forwards, always trying to avoid glancing to my left. To the trees, and the red eyes that might be hiding between them.

Witch Hunt has more than one monster living within its gloomy, dead forest. It’s full of them. For a slayer of supernatural beasties, it should be the perfect hunting ground. Not for me, however, a man with no sense of direction and an acute fear of spooky trees. I am very sweaty and very lost. 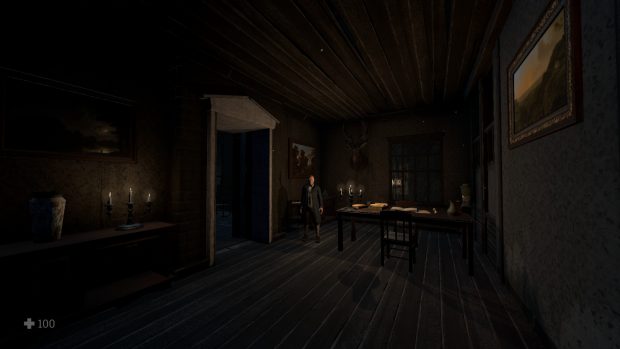 The town of Bellville has a monster problem stemming from its obviously evil forest, which a revenge-driven witch hunter must enter and clear out. With the narrative not extending beyond that, and monsters that run the gamut from spitting plants to flying demons, it’s more a creepy monster-hunting theme park than a coherent adventure.

'No hand-holding' is a listed ‘feature’, which is usually a warning sign. In this case it means only some game concepts are obscured, not all of them, but what’s clarified and what’s left to forum questions seems to be largely arbitrary. The game is tricky enough without the random withholding of information, and alt-tabbing to seek answers completely kills the atmosphere Witch Hunt attempts to foster.

While the forest is full of monsters, it’s specific creatures that you’re hunting. Wandering bosses with their own patterns of movement and behaviours prowl among the trees, and you’ll need to actively hunt them down. It’s not easy. Witch Hunt has a pretty novel hunting system, but it’s not particularly intuitive. 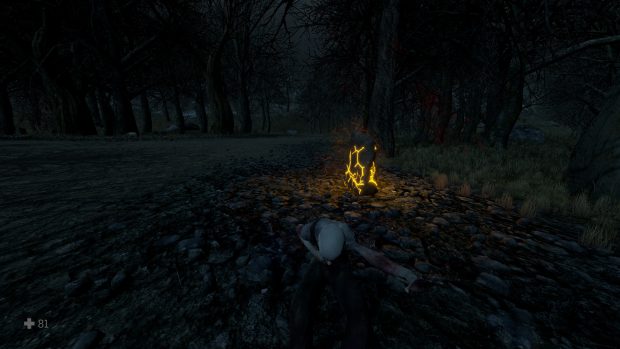 See, despite having an aversion to the supernatural, you’ve got magical powers and totems that you can use to track and hurt your quarry. The one you’ll most commonly use is your monster sense, which makes your heart beat faster when you’re close to the monster you’re tracking. It’s a passive power, but it still drains your mana. It doesn’t make a whole lot of sense, but it does conjure up these panicky moments when you know something is close, and you're desperately trying to find it before the well runs dry. It encourages you to make some pretty hefty sacrifices, too, like visiting ominous cairns so you can trade half of your health for more mana.

Your totem traps, your ability to briefly see through the monster’s eyes, even saving costs mana. It’s pretty stingy, though it ostensibly puts you in the mindset of a stalker of nasty creatures, conserving resources, saving bullets, always having a plan for when things go awry, or at least a route back to the safety of Bellville. If you don’t, you’ll end up like me, endlessly wandering the moonlit forest, slowly dying.

Maps and compasses can be discovered or purchased, but without them you’ve just got to have a good memory and try to keep landmarks in sight. I can’t even remember what I had for breakfast and, honestly, I wasn’t paying much attention when I chased a dog for five minutes, completely losing the path I was following. Hence my predicament. 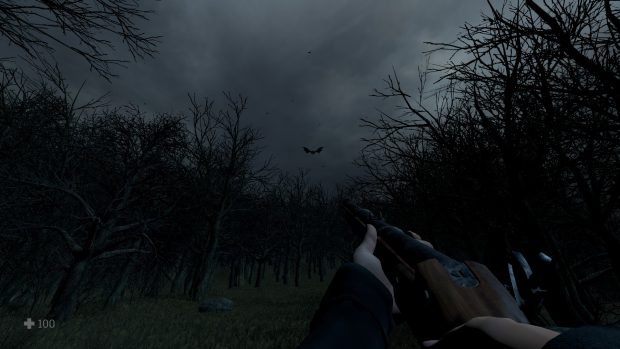 For a while, I was quite content to be lost. The forest can feel equally vast and empty, but it hides plenty of treasures, ruins and abandoned buildings. There’s the barest hint of environmental storytelling, however there's potential for a lot more. The dearth of notes and lack messages smeared in blood is a welcome break from the norm, but something needs to tie it together. Between exploring these places, I killed every ghoul I came across -- who all confusingly sound like dinosaurs -- but as my box of silver bullets got lighter, I started to spend a lot of time crawling, avoiding confrontation. Every snapping twig and ungodly howl sent me to the ground.

I almost died in a stone circle. Witch Hunt’s landmarks draw you towards them, not just because they suggest sanctuary from the sea of dead trees, but because they usually hide something interesting within them. In this case it was one of the aforementioned cairns and a healing plant. Though lost, the game still guided me towards things of interest with audio cues. In this case, it was also a trap. 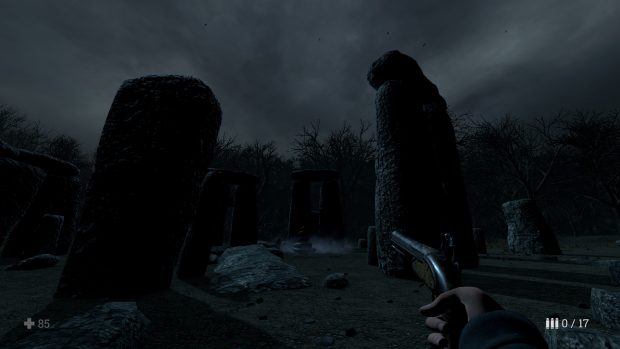 As soon as I entered the circle, a plant attacked me, spewing acid all over what I presume was a handsome witch hunter’s doublet, and maybe even a cool hat. Acid eats away at you until there’s nothing left, but there are two ways to save yourself. If you find a healing plant, you can use that, or you can just jump into some water, washing it off. It’s a clever, though lamentably exclusive, use of the environment. It’s also a risk, however, as the freezing water can hurt you, as well.

Few of Witch Hunt’s monsters are genuinely menacing, even when spitting acid, but the whisperers really got to me. They’re just smudges, but they’re quite scary smudges. Really. You’ll hear them before you see them, whispering indecipherable but unnerving nonsense. There’s something about the way they fly towards you once you’ve been spotted that looks so horrible and unnatural that you can’t help but briefly freeze up. That’s all the time they need to close the gap, slamming into you, filling the screen with a red, screaming face, and then vanishing, along with a massive portion of your health. I never did get around to getting a decent snap of these horrible spectres, but I have attempted to capture their essence for you, myself. 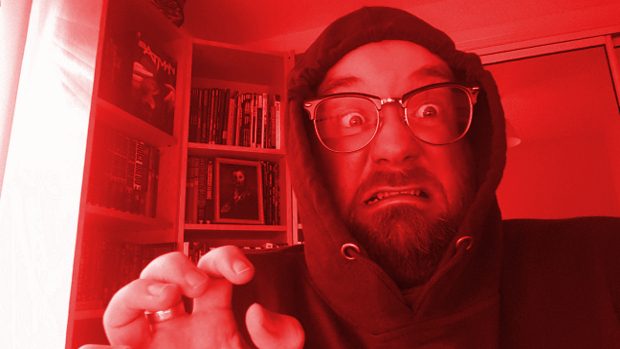 They’re invincible, unfortunately, and seemingly impossible to escape once they’ve seen you. One of the most prominent enemies in a game about killing monsters, and they’re unkillable. Knowing that takes away some of their power to terrify, while the frequency with which they seem to show up in some areas makes them devolve into an infuriating pest.

As I spent more time traipsing around the forest, looking for a way out, the tension transformed into tedium. Then, some hope appeared on the horizon in the form of an abandoned farm and, better yet, a fast travel point. With it, the town would be only seconds away. Finally! I rushed to the signpost, ready for a break. Not ready enough, apparently. You can’t fast travel at anything less than full health. This extremely petty rule left me with two options: stand around for ages waiting for my health to slowly regenerate, or go searching for healing herbs. I chose poorly. 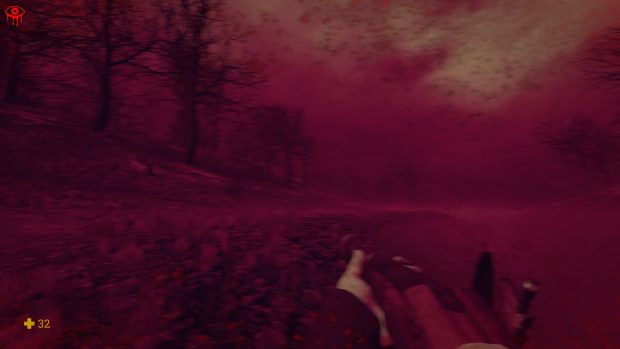 The first herb I found wasn’t enough to fill me up, so I followed the river, hoping to find more clinging to its banks. I’d lost more health in a fight with some zombies when the telltale twinkling sound let me know that my trials were almost over: another herb was nearby. Unfortunately, it wasn’t the only thing. I took one step forward and the screen went red, followed by a rapidly depleting health bar. I swiveled around and it stopped. Turning around again, the red screen and pain returned. Near death, I fled in the other direction.

It was my first encounter with a deadblind, an infuriating enemy whose trick is doing damage just by being in your field of view. I’d apparently come across one, though I definitely didn’t see it. Nothing is particularly easy to spot in Witch Hunt, but deadblinds less than most, especially when the simple act of looking in their direction obscures your vision and rapidly kills you. They’ll be more visible after a future update, the developer says, but I’m not convinced there’s any way to make their mechanic seem anything other than cheap. 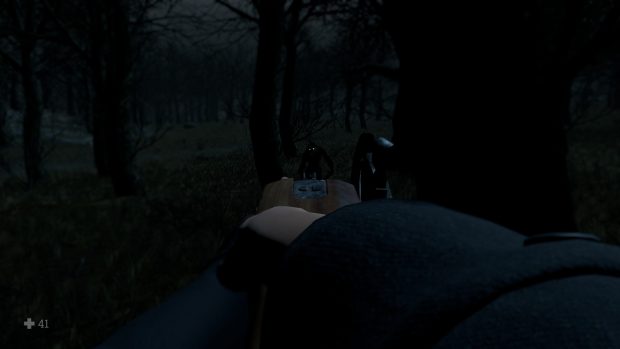 I was down to a sliver of health, unable to get home or heal. I headed back the way I came, which is when the tiny amount of mana I had left started to vanish. The beast was near. I sprinted, knowing I had almost no time before I stopped being able to track it. Completely out of health, mana and breath, I crested the hill, and there I saw it: a werewolf. Or at least a silhouette of a werewolf, with only its piercing eyes visible. It charged at me, closing the gap with awkward, preternatural speed, as if someone had hit fast-forward. I fired the rifle, filling the screen with smoke. The werewolf ran away.

The chase was brief, and I quickly lost my prey to the darkness. I considered going back to the cairn, but I’d need to heal before I could sacrifice all that blood for mana. Of course, I had no idea where the cairn was, or the other ones I’d passed. I picked a random direction and marched, somehow right into the path of my chum, the werewolf.

A second later, I was a corpse.