If you click on a link and make a purchase we may receive a small commission. Read our editorial policy.
Developer: Pixelnicks
Publisher: Screenwave Media
Release: Out now
On: Windows, Mac
From: Steam
Price: £15.49, $20, €16.79

I'm a bit torn, readers. Eagle Island has a lot going for it. It looks lovely, for one, with a rich palette fully enlivening some classic game environments. Everything sounds great, and on paper its design is timeless, as you explore an island level by level, unlocking more powers with each defeated boss. And its novel weapon should be a huge draw - instead of jumping on heads or hacking or bashing monsters, you throw an owl at them, either as is or after upgrading it with magical feathers.

But I don't like it. I'm still playing it after two days, but not because I'm hooked. It's because it never quite stops annoying me.

It's not, I want to emphasise, because of what it is. "A retro-inspired platformer with pixel art graphics" is one of those descriptions that does a lot of games a disservice simply because it can apply to so many, often weaker, games. Eagle Island captures most of what such a platformer should. Young Quill is shipwrecked on an island with his two owl friends, one of whom is immediately seized by the gigantic eagle that terrorises the area. A local rando implores you to get to some magical totems and absorb their power before the eagle does, so naturally you run off to explore and clear out a series of areas from their rightful monster inhabitants. I very nearly called these areas 'caves' since they're all separated from the overworld by doorways, but each is essentially a distinct level with an environmental theme. You have your watery one, a foresty one, a mine one, and later they mix up a bit more. But even before then, despite being traditional video game level themes, they're lovely. 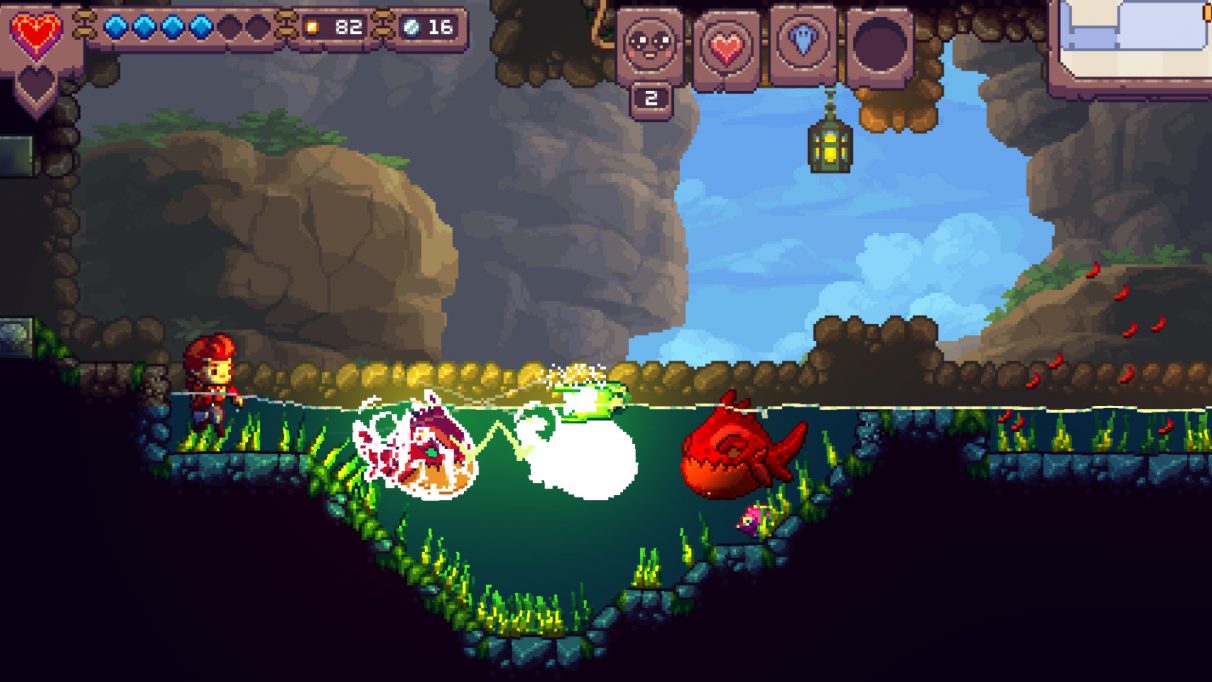 The water level, usually the most boring, is more of a shoreline one, with hermit crabs, shallow rock pools, and odd spike-spitting anemone things lurking in dank caverns. Then the next few screens will be light and somehow breezy outdoors ones, with tiny waterfalls and distant, heavily eroded cliffs. The desert similarly alternates between dusty mines and warm orange vistas. They're all livened up with little animations and plants. A tiny mole burrows up out of the earth, little birds take flight, and dandelion clocks scatter as you run past. Loads of love has gone into the atmosphere, much of it easily missed. It's a great example of why neither 'retro' or 'pixel art' need to be simplistic.

At the end of each level, of course, you pick up a new power. Initially it seemed that this would lead to a Metroidvania situation, but beyond the obstacle blocking you from the next level, that's not the case. Powers are centred on your weapon, and this is where Eagle Island stands out. Your first unlockable is a falconry glove, and, yes, the idea is you point and instruct your owl Koji to attack, but I'm calling it what it is: you fling your little friend into enemies to kill them. Just straight up feck a bird at a charging boar. What else are friends for, if not bodily hurling into the face of anything that dares threaten you?

The unlockables, naturally, imbue your bird with elemental attacks. Rather than straight damage upgrades (most monsters are easily puffed with a single dose of owl, two at most), special attacks send Koji through multiple enemies with a lightning charge, or freeze them in mid-air, shattering them on the ground. 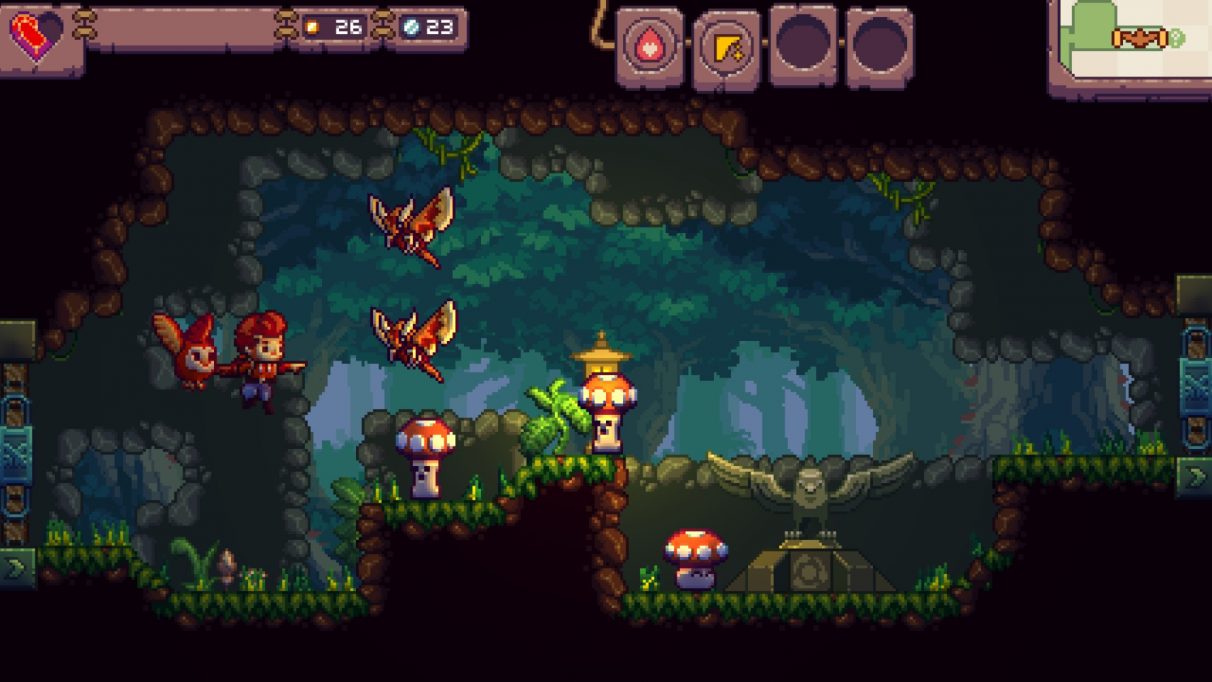 It... sounds more useful than it is. While enemies sometimes line up closely enough for a lightning shot to be worth it, and the fireball clears out the occasional awkward corner or cluster, the vast majority of your fighting will be done with the basic birdstrike. There are very few problems that cannot be solved with raw strigine fury. Power attacks cost mana, which isn't scarce, as it spills out of free treasure chests sometimes, and drips out of enemies if you splat two or more of them in double time. But the combat is built around rapid use of the basic owl attack, as one of the first tutorial tips is about chaining kills to milk the wildlife of precious health blobs.

The problem is that the timing of doing that is interrupted by using power attacks, especially as they all use the same button, and you have to manually switch between them by scrolling through the lot. Koji can launch in any of the eight government sanctioned directions, and aiming is a case of holding a button and pushing the thumbstick or keys that way (I'd highly recommend a controller, as I struggled with the keyboard enough to make the switch very early on). While you're doing this you hold still, even in mid-air, which is a key means of defeating many enemies, and sometimes surviving their area attacks. But power attacks generally disrupt any rhythm you've gotten into, to the point where it's just easier and more comfortable not to use them. And of course, if you do fire them off in succession, you burn through your mana and can't use them for a while anyway.

All this is closely tied in with why I was frustrated with Eagle Island. Chaining attacks, and timing and moving and holding position in all the right ways, should be an entertaining challenge. To some extent it is, and a lot of it feels nearly right. But it's too easy to slightly miss a shot, or for Koji to take an instant longer than you expected coming back, or for an angle to go a bit wrong. If Koji misses or spangs into a wall (it's hard not to wonder at what point Koji stops obeying out of loyalty, and becomes too concussed to form any kind of mental resistance) they're unavailable for a few moments, leaving you not only helpless but unable to defy gravity and momentum as you were expecting to, and probably costing you health. It feels just a little bit off. A little bit too unreliable. It kind of renders a lot of the items a liability. 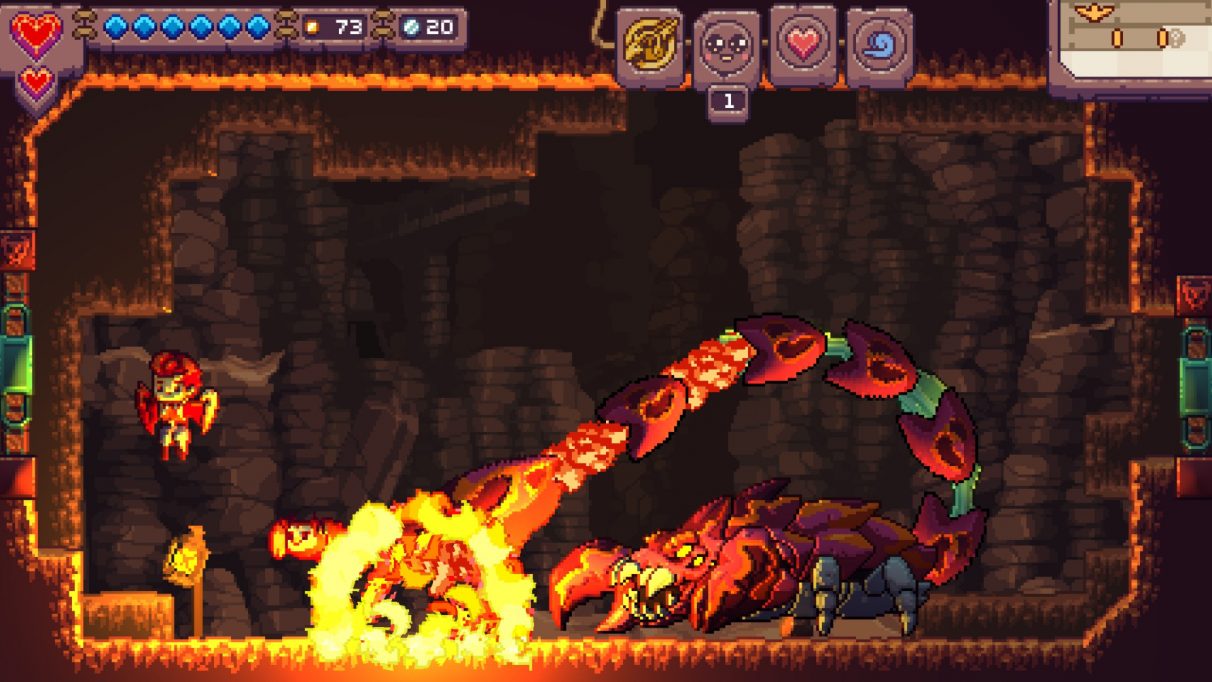 Levels, I should add, are randomised each time you die or retry, and this is something Eagle Island does particularly well. It's rare that a screen felt truly unfair, although I very much hope the devs can change the start of the second level so that the short tutorial there isn't repeated every time, and navigation was easy and natural. Had I only played any given level once, I'd have no reason to doubt it was laid out by hand. The bosses, too, usually the bane of my existence, and trebly so in a game without saves or checkpoints, were ideal for me. They are threatening, and I felt I was one silly slip up away from a restart, but managed to see them off far more easily than the levels that preceded them, often on my first turn. The relief when they were put down was a triumphant release of tension, rather than a final expulsion of hatred. That worked for me.

But also subject to the randomisation are the contents of treasure chests, about half of which are unlocked, full of coins or mana, and half are opened with said coins, and contain items. These can be binned or fit into four inventory slots, and there are two or three shops on a level offering a narrower selection too. Most of these items are useless. Or rather, so niche in their use that they're not worth thinking about, and most expire after a (often long, in their defence) time limit. Being able to push off into a jump when hanging off a ledge isn't ever something I used when I had it, or missed when I lost it. Firing an owl downwards, launching myself, about 5 pixels higher was utterly pointless. Adding a secondary effect to a power attack sounds good, but it runs into the same problems. There are several items that improve the way Koji moves... but in doing so they disrupt the patterns of moving and attacking I was used to, getting me into more trouble than they saved me from. Even if you do get used to using the items, they'll vanish after time, or when you die, and you're back to learning the old limits. 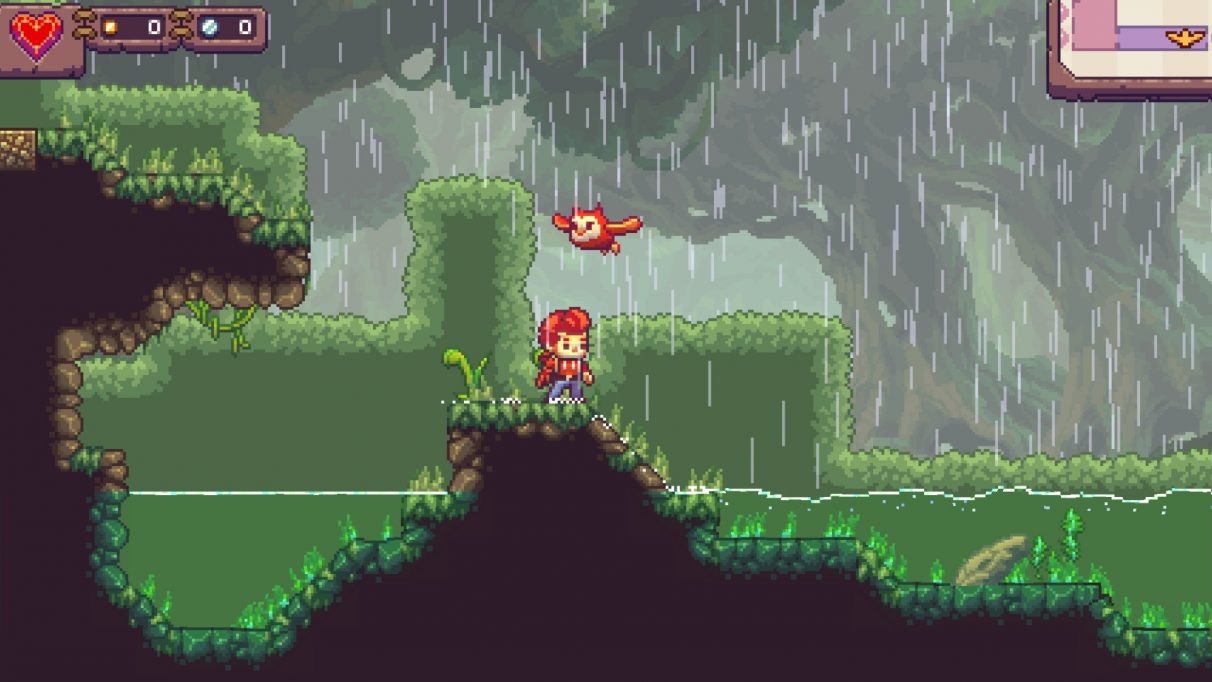 Eagle Island promises a lot, but whether it ever truly delivers I cannot say, because after two days with it I am plain done. I was never quite enjoying it as much as I wanted to, and it never quite came together even during the brief window when the plot took a turn and it looked like it was about to really open up. Even the promise of more ways to brutalise my dutiful owl isn't enough to drag me through another afternoon of increasingly grating near misses.