The past few years have been good for TV and film-licensed games, especially anime tie-ins. What used to be a dumping ground now contains a growing stable of games blending compelling mechanics with 3D art that captures the look of the original 2D animation.

Based on the popular Netflix-backed anime series, Little Witch Academia: Chamber of Time is sadly not one of those, but not for lack of trying. It's a game with grand ambitions that go unfulfilled.

The very opening scene of the game felt almost like a warning. The headmistress of the Luna Nova academy for witches is delivering an overlong speech to the students. Rather than present it as a cutscene, Chamber of Time torpedoes the joke by using the default conversation UI for the talking, then cuts away to a screen showing the in-game clock ticking forward to show the passage of time. Repeatedly. It's a microcosm of the issues that plague the entire game's design - there's soul here, but the systems here just aren't built to support it.

Chamber of Time is surprisingly friendly to those who have never seen the show before. The core concept is immediately accessible - The Worst Witch by way of Harry Potter plus a few more explosions - and the early game offers a narrated introduction to each of the major characters if you want to quickly get up to speed on what their deal is. Surprisingly, even the most minor of characters is fully voiced, although the audio is only available in Japanese with subtitles in a variety of languages. There's even a few cutscenes direct from the anime studio.

The story is nicely self-contained too: magically less-than-gifted protagonist Akko and her oddball friends find a hidden chamber in the school on the first day of summer holidays, and find themselves trapped in a time-loop, doomed to repeat the day forever unless they can unravel the mystery of this hidden annex in-between goofing off because it's an endless summer holiday now. It's charming stuff, and arguably tells a better, more coherent story than the anime series itself. It's just a pity that Chamber of Time does so much to undermine itself. 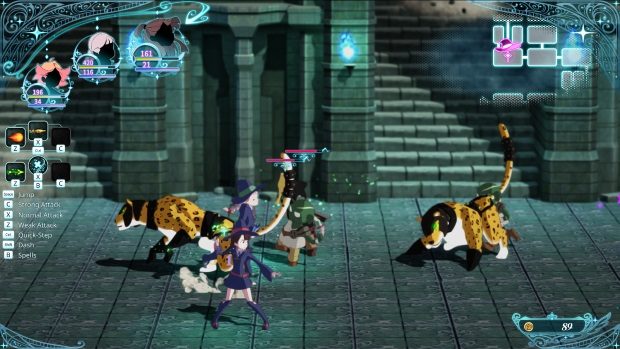 Split into roughly two halves, the game alternates between a gently paced game of wandering the halls of Luna Nova as Akko, chatting with people, eavesdropping on conversations, picking up minor fetch-quests and generally living the anime witch-school dream. The other half of the game is a semi-randomly generated dungeon crawl RPG/brawler hybrid that so desperately wishes that it was even a third as good as Dragon's Crown. These two halves don't so much compliment each other as constantly gouge chunks out of each other.

After an awkwardly paced opening hour, you finally reach your first save point and what had previously been a glorified visual novel with an overly complex map to navigate explodes messily into a twisted ball of interlocking but undercooked gameplay mechanics, all in service of the dungeon crawling side of the game. Inside the Chamber of Time itself is a magic door which leads to monster-filled dungeons. Pick a dungeon type, pick three girls, go punch and zap monsters until the boss is down and loot/XP is gained. If only it was fun to play. 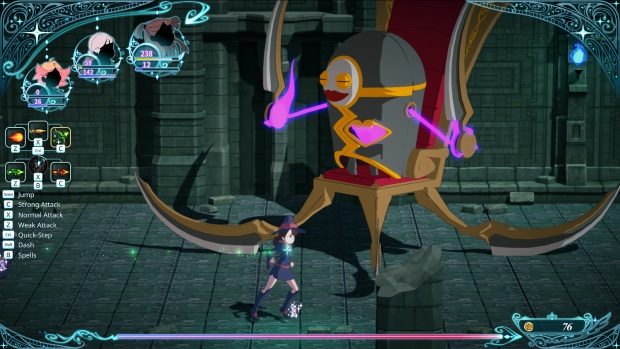 Little Witch Academia's combat is an awkward, sludgy mess. Even using a gamepad, movement is limited to the analogue stick only, and running and dodging are assigned to separate buttons. While some of the seven playable characters are more melee-centric, most just throw blasts of magical energy as their standard attacks, which robs the game of a combo system, and makes close combat with one player character and two NPC helpers so visually messy that it's nigh impossible to keep track of what's happening. Worse still, it constantly commits a cardinal genre sin, with enemies getting stuck off-screen leaving you with no option but to wait for them to slowly walk back into punching range.

Those NPCs do add a little damage to the mix, but for the most part they're just an enormous liability, as likely to run wildly in glitchy circles or insisting in standing on top of a trap as they are to lend assistance. You'll still need to invest time, resources and loot into keeping them levelled and equipped in order to not become entirely useless, but it all just feels like busywork and padding. The dungeons themselves are astonishingly monotonous too. While the tileset may change occasionally, each environment type only has a handful of room types, none of them interesting. At least some of the monster designs are fun. 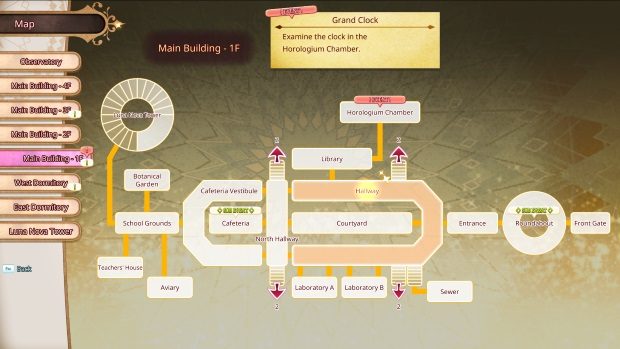 On top of all of this there are so many related gameplay systems tied into the dungeon crawling. You've got item-enhancing, scads of loot, a remarkably complex magic system (close to a hundred spells, each with multiple upgrades) held back by spells being often-underwhelming in both visuals and impact and the fact that you have to stop with analogue stick neutral and hold a button to prime them before casting. Capcom's Dungeons & Dragons brawlers back in 1993 solved this by letting you cast spells with fighting game style inputs. It's sad to see 24-year-old wisdom forgotten.

The weird thing is that despite all these gaping flaws, I don't hate Little Witch Academia: Chamber of Time, because I can see the outline here of something potentially great. There's vision here, even if this game couldn't make it work. None of the concepts here are inherently bad, and the actual storytelling and most of the dialogue are entertaining, if poorly presented and padded out with side-questing to fuel the engine of pointless nothingness that is the dungeon crawling half of the game. 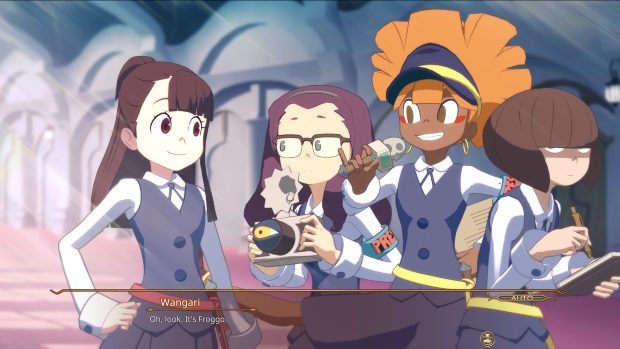 Even the better half of the game - the wandering, cartoon witch life - has far too much hiking around required before you unlock even the most basic of fast-travel capability. This is made worse by the fiddly sidequest system that requires you to be in the right place at the right time due to the time-loop malarkey. While you eventually get a feel for travelling around the school, repetitively textured hallways and awkward camera angles make even basic navigation a dizzying affair at first.

In a perfect world, Chamber of Time would be a visual novel with perhaps some light RPG elements. It's not so much that it needs the fat cut from its bones, but rather it needs at least two thirds of its tangled, overgrown skeleton removed outright. So many of the systems and menus and even half of the game's core feels tangential to what most would want out of a Little Witch Academia game: the opportunity to explore the world of the anime, interact with the characters and goof around with magic, usually to disastrous, comic effect. 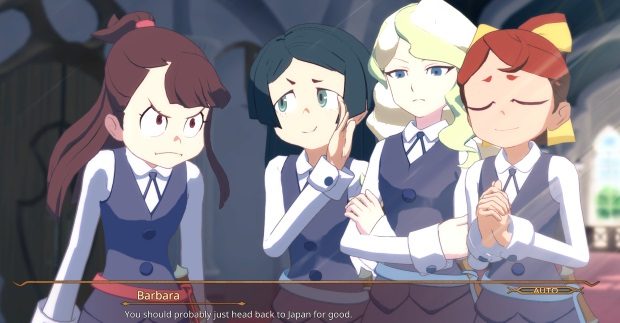 Like Akko on a broom, Little Witch Academia: Chamber of Time never really gets off the ground, but not for lack of effort. There's maybe a third of a good game in here, weighed down by a mountain of big and ambitious ideas, none of them given the time and attention they needed to really function. Super-fans of the show may get some enjoyment out of the story, but only if they can stomach a lot of grind, tedium and wandering through identical corridors, and for anyone else, just stick to watching the anime.