If you click on a link and make a purchase we may receive a small commission. Read our editorial policy.
Developer: Robotality
Publisher: ChucklefishRelease: Out now
On: Windows, Mac, Linux
From: Steam
For: £13, $16, €14

[To the tune of Indiana Jones.]

Ah, a classic theme for a classic series. And yet, the last Indiana Jones game I remember playing was a highly irritating Super Star Wars clone with a terrible life raft section I never managed to beat. How am I ever to get revenge on all those nazis whilst wearing a swish hat? I could play Wolfenstein with a swish hat on, I suppose. But no, wait, look, it’s Pathway! A tactical roguelike that probably thrusts its hips in the face of the Berlin interpretation because that’s where nazis came from, a game where every road is a path... way... to adventure! Some of them actually lead to a flat tyre, but we’ll talk about that later. Onward!

Right away, there’s something positively swashbuckling about Pathway. It’s there in the selection of rough-hewn misfits you choose from before embarking on one of five scenarios. In the way your salty crew perform gallant vaults over cover before blasting confused Alsatian dogs with sawn-off shotguns. In the bravado-laden quips they utter after evading an attack. Nary a buckle goes unswashed, nor a swash unbuckled.

After picking a scenario and picking a team, you’ll be taken to a map dotted with interconnected nodes. You’re shown immediately which node you have to reach to end the scenario or progress to the next map, and then it’s off you go. Dun da da da. A few of these nodes warn you about upcoming combat, a place to rest, a shop, or a super special mystery node, but for the most part, each node triggers a random story or combat event, where you’ll either make some choices, roll some invisible dice, or get transported to a grid to fight some nazis in turn-based combat. 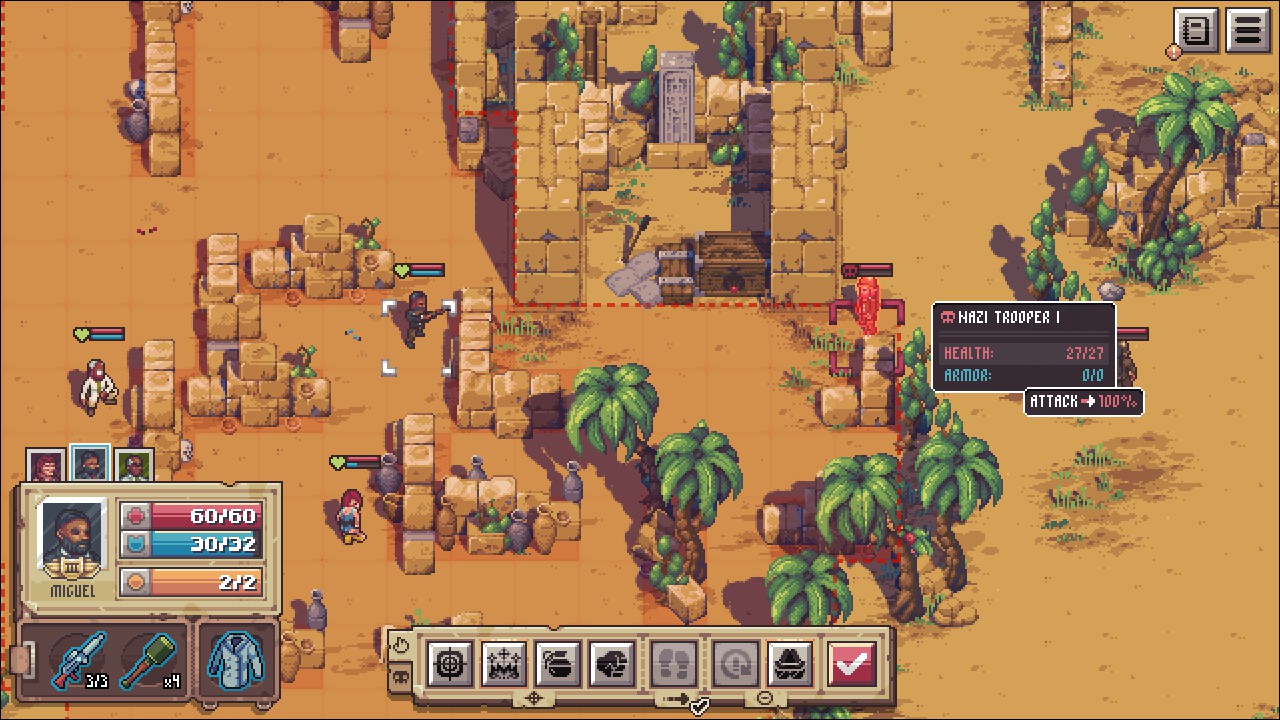 Unfortunately, both the combat and the skill trees for each character are too restrictive for this to be an exciting proposition for very long. You pop your pixel pals behind some cover. You pop some shots off. You hope the nazis or zombies miss you. There’s a resource called ‘bravery’ you can use to increase defence and evasion, or fire two shots instead of one, or a few other abilities depending on the character, but there’s no real secret sauce to the combat. Positioning. Some light threat prioritization. Reloading or healing when necessary. There’s nothing glaringly wrong with it all. It will not blind you with wrongness. But it will pick up a tiny pin of blandness and keep pricking you in the eye until you ask it nicely to stop.

A good thing Pathway does is making sure the actions taken on the map screen entail consequences which then seep, like a dripping crock pot of continuity stew, through to the combat, and vice versa. Each node you move to eats into your gasoline supply. You can buy more gasoline at shops, but even after the scenario is finished, your money pool carries over. The health and armour of your explorers can only be restored at rare rest nodes, or else through reasonably expensive recovery items, and so each risky action taken in combat feels - albeit in a very teensy way - like a withdrawal from a limited pool of dashing escapades. 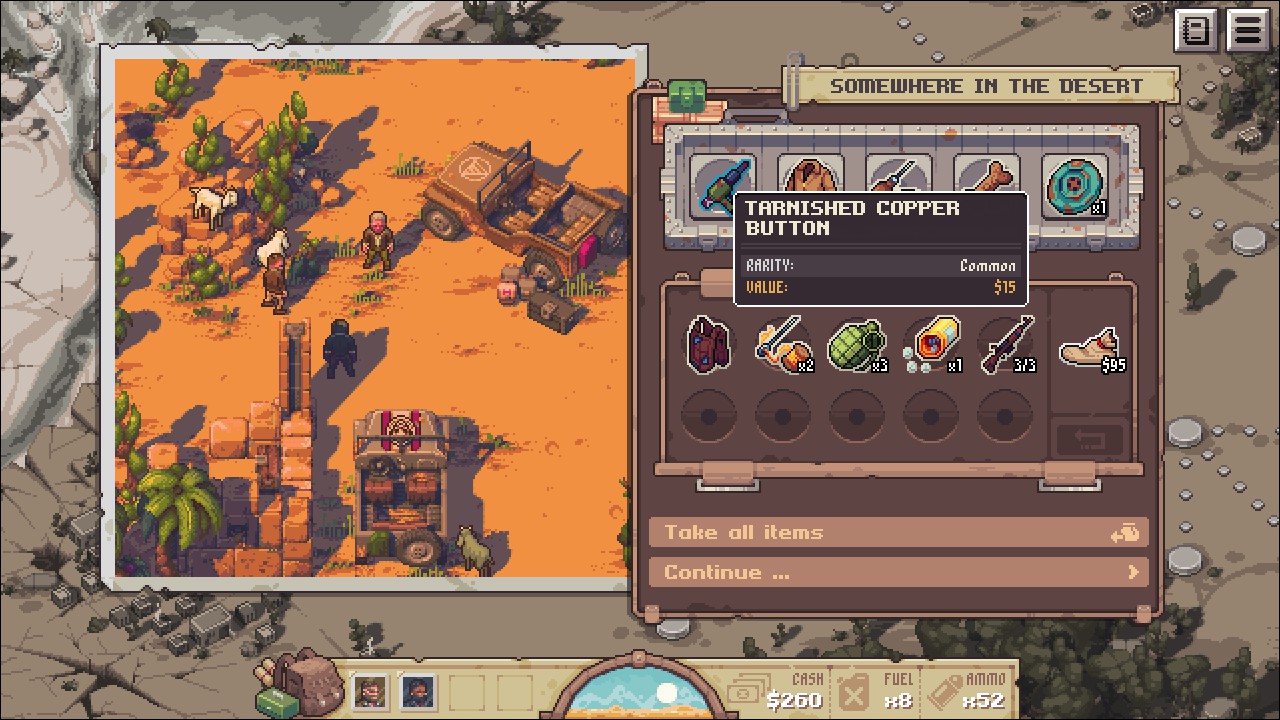 Another satisfying bit of continuity is the consistent pool of characters you’ll recruit. You pick a few before each scenario, and sometimes find extra hidden desert pals along the way in rare events. You hold on to any experience or equipment you accrue, and each scenario can be played multiple times. The idea is that if you get stuck on one of the longer and more difficult missions, you can grind out earlier ones until you’ve assembled and upgraded crack team of superbastards.

Here’s another good thing: it’s extremely charming to watch action movie tropes translated into pixel art and lines of text. In the first scenario, I ran into a nazi ammo dump and ended up getting ambushed. I got treated to a glorious ‘stand back or I’ll make an explosion happen’ scene. Partly because of a lucky dice roll, and partly because I’d taken along a grenade specialist. It ended with an explosion anyway. In a game that took itself seriously, this would be the type of scene that’d make me yawn so hard I’d inhale my monitor, but Pathway’s knowing pastiche and limited animation means it’s like watching the Matrix with puppets, or a stop motion Die Hard, or Kit Harington pretending to feel emotions. 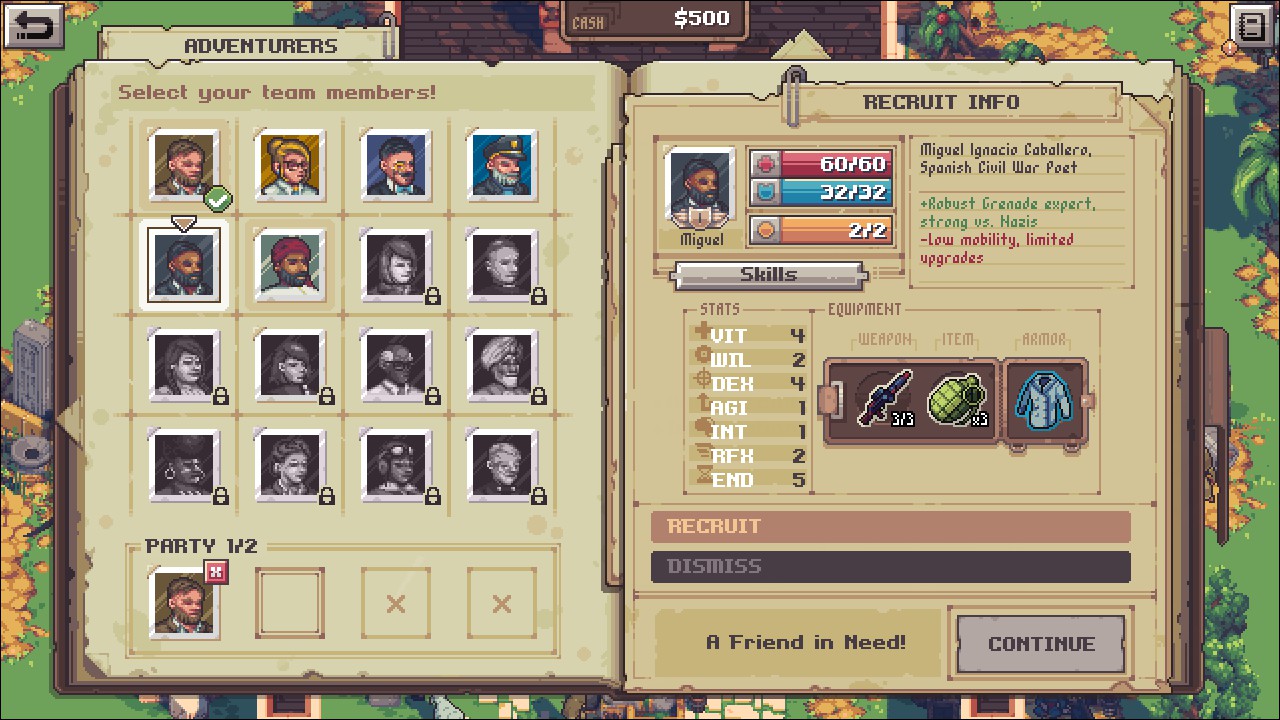 Then, events start to repeat themselves, and you realise you’re spending most of your time skipping through story sections and wishing combat sections could be over quicker. The detailed pixel art and rousing soundtrack and fun bits of loot like ‘rusty button’ and ‘bloody scalp’ all work together to convince you you’re having a great time, but it ends up feeling more like a chore than it should. Fancy a quick play session? Haha. Hoho. Feel the levity and gaiety and such! Maybe sip on a light, bubbly beverage and tickle your own cheeks with a feather? No, sorry. It’s too plodding for that. Feel like putting your serious tactics hat on and furrowing your brows while thoughtfully chewing on a monocle and poking yourself in the eye with a fat stogi? Again, no. The game just doesn’t offer enough variety in its combat.

A brief aside on comedy nazis, and the portrayal thereof: I can see why, as seemingly seismic shifts in the overton window threatens to normalise the horrific, some might find the high-camp portrayal of cutesy comedy nazis an issue. Pathway’s nazis are far more goofy than they are terrifying. There’s a sniper you can recruit named ‘Baron Von B. German - Gentleman Impostor’, who wears a monocle and does less damage against nazis. Here’s my take: comedy nazis are good, actually. You could read some words I wrote about this sort of thing, or you could just watch this excellent pair of video essays from Lindsay Ellis and Dan Olson. In short though, anything that reveals the nazis for the utterly ridiculous, theatrical, self-mythologising shits they were is important, as it actively works against the romantic, grandiose image they cultivated for themselves. The game does a fine job here. 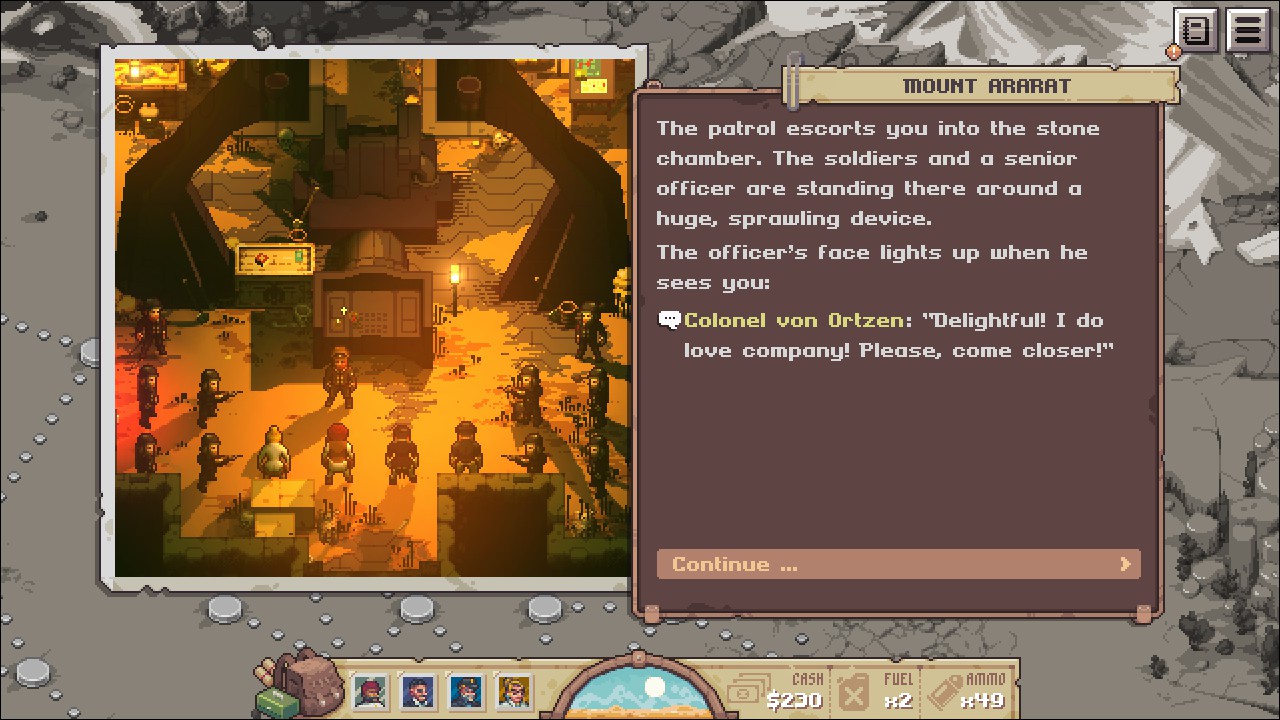 But does it path my ways? I think it’s a generally inoffensive game with extremely charming presentation that’s badly suited for the ritualistic plonking down of oneself in front of a chunky desktop PC, but would probably be a welcome distraction on the Switch. It feels like it’s taken a couple of -lite versions of different genres and then stuck an extra few -lites on for fun, but neglected to tighten up the rewarding parts to match the short sessions it seems geared towards. Turn-based tactics for beginners might sound tempting, but if that’s the case, I’d still suggest Wargroove over this, which added some difficulty options recently. Also, you can make friends with the dogs in that one.