Oh my! Oh what an actual proper treat. Ladies, gentlemen, humans of Earth, I have for you a really good point-and-click adventure game! It's Unforeseen Incidents, and here's wot I think:

And trust me, I don't mean, "Good considering how bad they usually are." I mean, "Actually really good." Unforeseen Incidents, despite its astoundingly terrible name, is a sharp, smart, witty and superbly constructed adventure, with stellar voice acting, superb music, and some of the most splendid hand-drawn art I've seen in forever.

Something strange is going on in Yelltown. Odd-job handyman Harper Pendrell starts seeing posters going up all over town, warning of a dangerous new plague-like disease, imploring people to call a mysterious corporation. When fixing a broken laptop for a scientist friend, he learns how serious the disease is, then sees someone dying in the streets, blood coming from their eyes, nose and mouth. That's the catalyst he needs to want to help do something about it, before tumbling into a tale of conspiracy, secret woodlands hideouts, and spiked coffees.

Despite that seemingly heavy setup, the game is a predominantly light-hearted affair, with Harper delivering a splendid barrage of dry one-liners, observational quips, and heartfelt attempts to be brave within his own fear. This is an extremely traditional point-and-clicker, with inventory puzzles, ludicrously convoluted chains of requests in order to borrow items from curmudgeonly strangers, and churning through excellent dialogue options to squeeze out every last gag.

This is a game created by a German developer, Backwoods Entertainment, but the script has been created in a very interesting way. Writing duties were split between the game's lead, German Marcus Bäumer, and Brit Alasdair Beckett-King, with each tailoring their own language version. Beckett-King, a stand-up comic, also gave us the wonderful Nelly Cootalot games. This is an exquisitely good idea - even the best German adventures can suffer via straight translations, but here we end up with a game that feels absolutely free of that awkward presence of translation. I can't speak to the German version, as I've only played the English, but I've laughed out loud so many times, which is a rare thing indeed in gaming.

It does pathos well, too, and I ended up really liking a lot of the characters. Gosh it makes a big difference when your lead character isn't a douchebag. He's daft, sometimes, but not arrogant, over-confident, none of the traits that plague this format.

Something that stands out in this regard, which I hadn't given much thought to before, is that its many working class NPCs aren't depicted as simpletons or conniving or less-than the protagonist, but rather his contemporaries and friends. The hick-accented guy who works in the scrapyard, the love-lorn guy who works on the dingy hotel's reception - they're not pastiches here, not lowly figures to mock. In fact, mostly they're lifelong friends. It feels dramatically out of place when the solution to one puzzle is to trick a friend into thinking he's watching something he isn't.

Another repeated theme of adventures is to find someone's weakness and exploit it. Someone's scared of something, you automatically assume you need to go find it and scare them. Which makes UI even more refreshing as it keeps avoiding this, instead having you inadvertently help the more vulnerable characters, rather than exploit them. And thank goodness it does this without any virtue signalling - it only stands out because of the realisation of how frequently adventures default to the opposite. It's also a nonchalantly progressive and inclusive game, again without any trumpets or flags, which in a genre recently prone to the opposite is quite a treat.

A good example of this exists in the middle act. Without giving too much away, there's a fairly standard puzzle where you need to distract someone from their post. I became convinced that the solution was going to be to spike his drink, because not only was he prominently and loudly drinking on a regular basis, but there was the means to do it in the room, and I'd found a guide book to local flora that mentioned a flower that works as a diuretic. None of it was used! The real solution was much more personal and meaningful, albeit somewhat more shocking. The real solution created an emotional jolt for the character that was redemptive, rather than cruel. Again, all of this is delivered nonchalantly within what is ultimately a comic adventure, but it's spectacular that it's approached from this direction.

The meanest the game gets is to ruthlessly mock a hipster cafe, and god bless it. It gives us lines like, after Harper complains that overpriced hipster cafes are a bit of a cliche,

"Yup, that's why this is an ironic, post-modern pastiche of overpriced hipster coffee."

I find it really interesting how many items and features in the game aren't used in the end. Prominent objects in the world that have descriptions, can be interacted with, yet never play a part in a puzzle. Or inventory items you pick up, but never need to use. It's unconventional in the genre, certainly, and I think if handled badly could be a headache, but it just isn't handled badly at all. And this is a long adventure game, so while I certainly couldn't help feeling I was walking past puzzles that were cut, it certainly doesn't lead to things feeling brief or rushed. If anything, it makes perfect sense that not everything you can see or hold is useful! There are certainly red herrings in there, but they don't feel cheap.

The inventory is unquestionably janky, and really needs some more polish, but I really like ending a chapter with a bunch of unused stuff, and its not feeling like a bug. 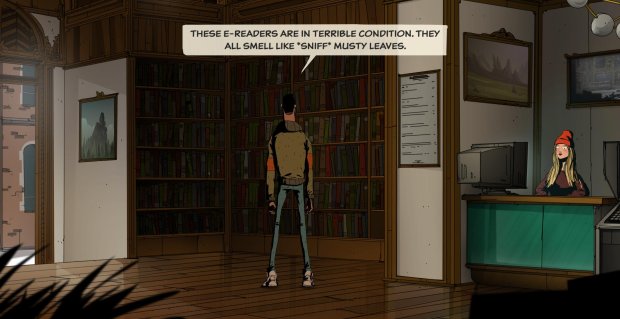 There are a few other issues. The third of four acts is significantly less polished than the other three. I've had mislabelled objects, puzzles given away with a character captioned by their real identity rather than who they're pretending to be, and for seemingly no good reason, a dumping in of the Leaping Frogs puzzle in a game that otherwise eschews such nonsense. There's also a puzzle that should have been really superb, trying to identify the location of a dubious building via collecting all manner of information and applying it to an interactive map, but the map was ridiculously glitchy and the clues don't really come together. I made a lucky if slightly informed guess in the end.

However, the game overall contains plenty of other superb puzzles too - I have pages of notebook notes like with odd symbols, noted names, and scribbled connections, which is always the mark of a meaty adventure. Along with great characters, many splendid jokes, and all of the glorious artwork, it is such a treat. 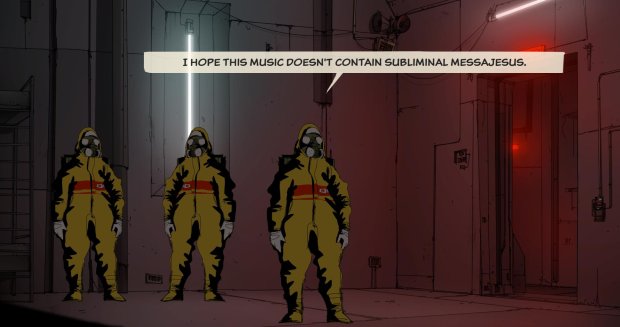 The voice acting throughout is just top-notch, with lead Matthew Curtis offering splendid timing and delivery of Harper's gags, and Jessica Carroll brilliant as reporter Halliwell. Everyone else is great too, not a dud voice in there, which is a rare thing indeed. I love that really minor characters, like Trish the librarian, or the guy who owns the photography shop, stick in my mind since, so strong were their performances.

And I've mentioned the art already, and it deserves mentioning again. The hand-drawn cartoon style by Matthias Nikutta is hopefully apparent from the screenshots, but looks even better larger and moving.

There are definitely some issues, especially the further you get through what is an enormous adventure game. Hopefully we'll see those getting tidied up soon enough, although I do wonder if a couple of the puzzles are beyond saving. These minor issues aside, I honestly can't remember the last time I've enjoyed a long-form point-and-click adventure this much. It reminds me why I love the genre so much.