If you click on a link and make a purchase we may receive a small commission. Read our editorial policy.
Developer: Rebellion
Publisher: Rebellion

Some games are like chips. Sin imparted these wise and useful words as I stared at this empty intro, struggling to convey the mildly-satisfying beigeness of Zombie Army 4: Dead War. It's about shooting many zombies, in a way that you may have done many times before. The zombies pop and crumble, as they should. The guns have punch and the punch has gumption, and sometimes a neat electric effect.

It's a fundamentally solid shooter, but also far from an exciting one.

Plot wise, this is the ol' 'What if the Nazis got their hands on awful satanic power' deal. Hitler's hellish powers have kept the Nazis in vogue, so you're a soldier mowing down zombies in the Dead War, roughing it through the streets of Europe. The streets are apocalyptic grey, the zombs are everywhere, and most of them are boring. They're classic shamblers, easy to dispatch with a rifle shot or a quick spray from your submachine gun. Too easy. Even in great numbers, the early areas nearly always give you enough room to back away and whittle down the hordes. They're too avoidable to be a menace. 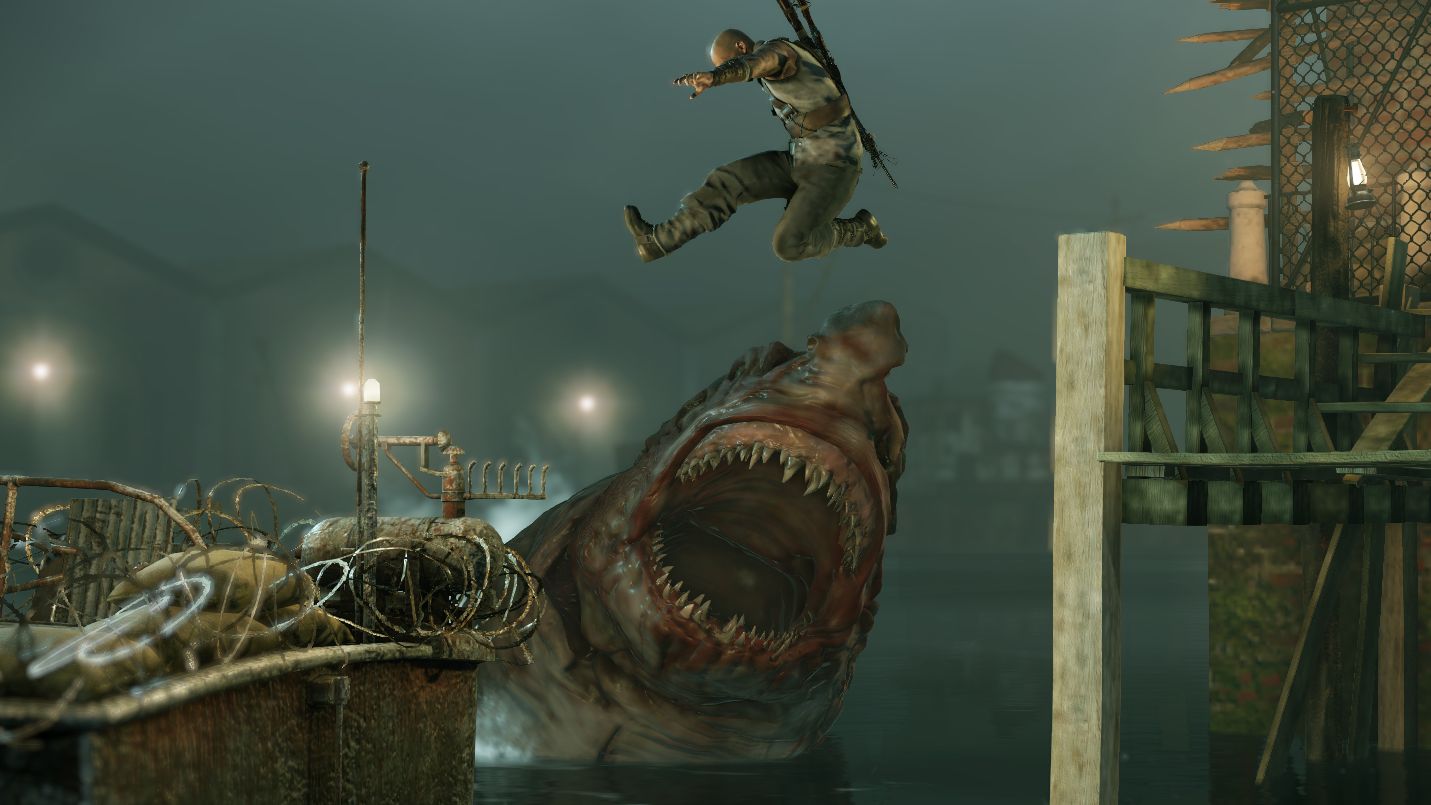 Dead War is much more interested in arcadey head-popping than it is in menacing. Your combo metre is a constant companion, ticking up as each dead thing hits the ground. Failure in Dead War usually means missing two shots in a row and losing your combo points, rather than dying. You get medals between levels, judging your performance on how high you've pumped up those points. Again, this is familiar. Basically: don't miss, and shoot exploding barrels for multikills. 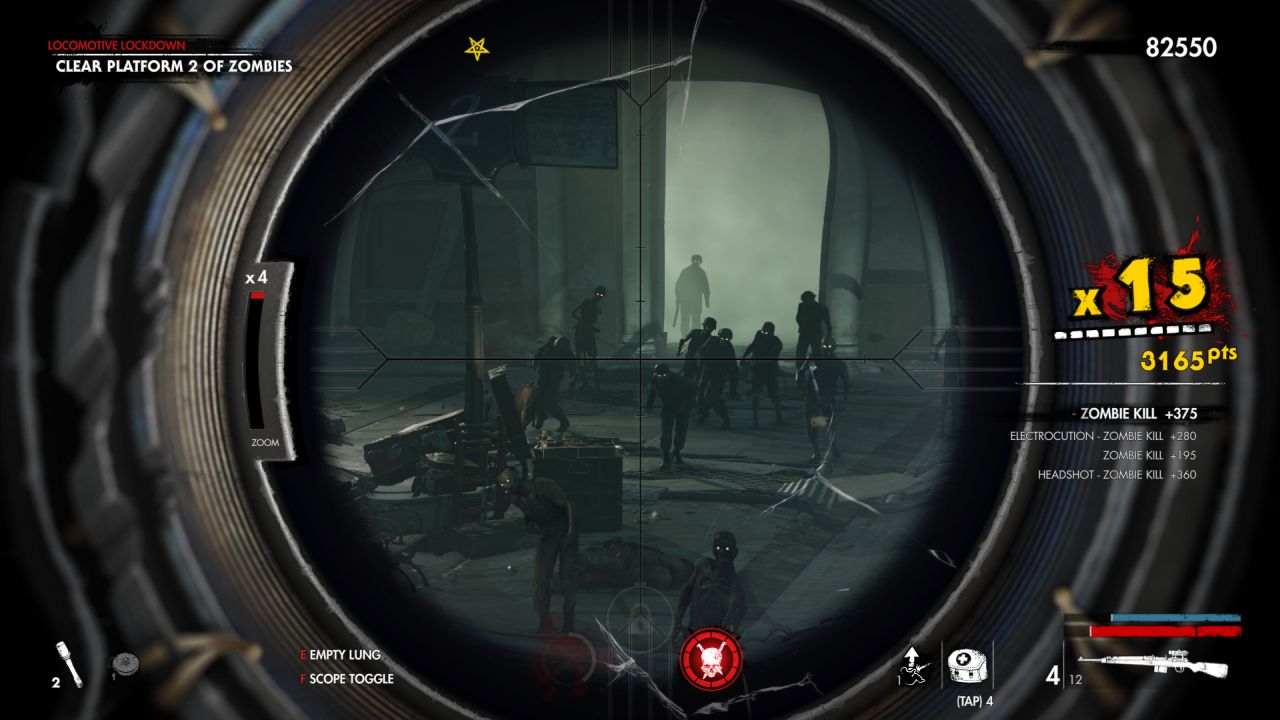 That arcadeyness is reflected in upgrades, which is where those electro-punches come in. With the zappy glove equipped and off-cooldown, I get to send zombies barrel-rolling backwards, electricity arching to everything nearby. Then I might slow down time while zombies vanish in a haze of submachine gun bullets, or insta-headshot three bads with my pistol. Ammo constraints get you switching between your weapons, and a melee insta-kill button rewards you with health and ammo every time it recharges and you get close enough to use it. This is all mostly well thought through, apart from the special explosive rifle shot that's tied to the same button that lets you slow down time. That is messed up.

That's an annoyance, but Dead War's main sin is repetition. Even when other zombie types were in the mix, I rarely felt pressured to change things up. I just backed away while whittling at their flamethrower tanks, or made sure I prioritised the generals that summon extra zombies. Missions became trudges between generators that needed fixing and defending, or, more often, simply unlocking doors by killing every nearby corpse. As my powers grew and I got to spend more time in slow-motion, fighting became as mindless as my enemies. 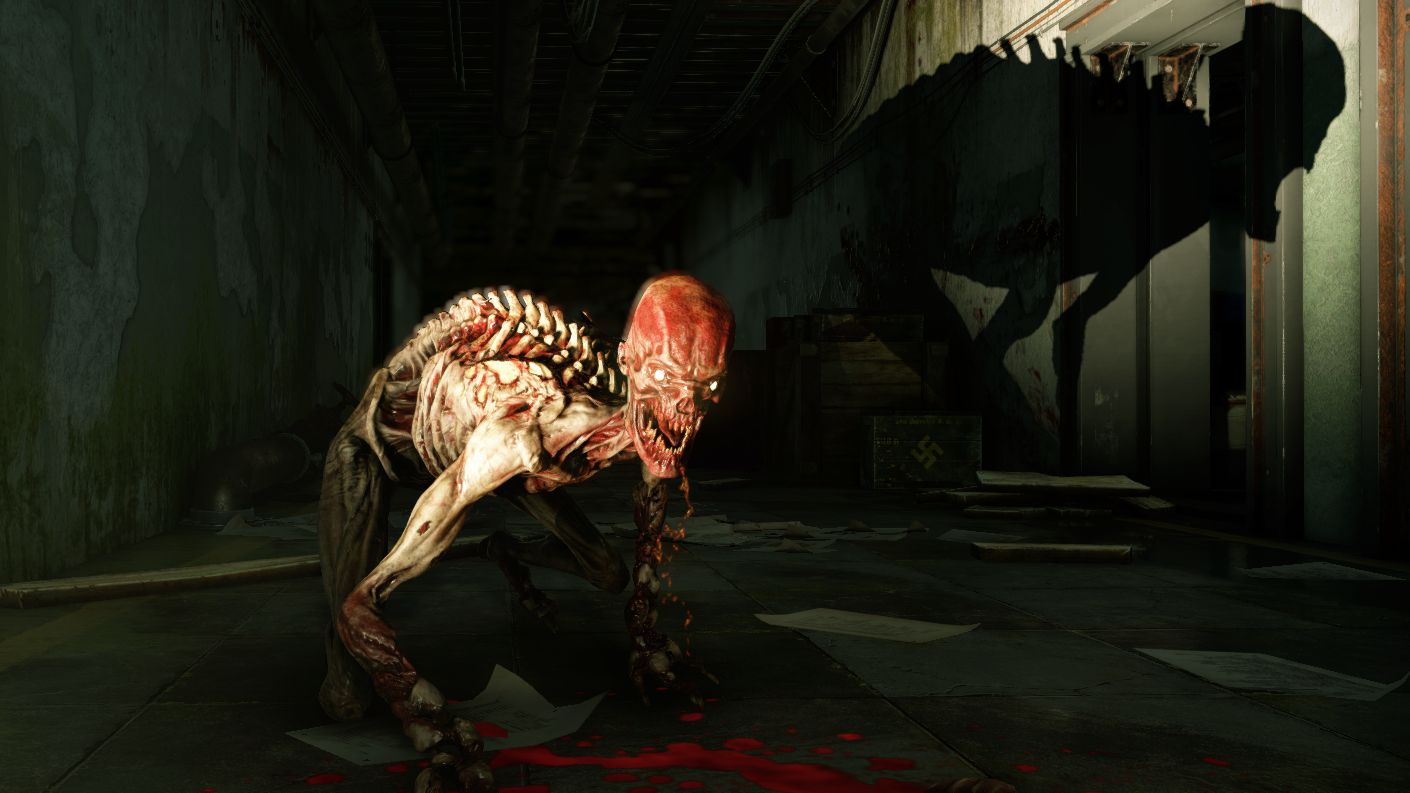 Towards the end, I did get glimpses of what could have been. I got trapped in a graveyard, forced to weave between flailing claws, frantically yet strategically thinning out the crowd while waiting for a bomb to explode. Making you wait for bombs to explode is another of Dead War's favourite tricks, but it rarely forces you into properly uncomfortable situations. I wish there were more. I want to swivel and yelp.

Or, perhaps, sneak about like in the Sniper Elite games that spawned Dead War. Give me big open areas, too, with lookouts to snipe as crashes of thunder mask my shots. Let me mess that up, and unwittingly summon near-unmanageable hordes. Instead, Dead War too often opts for the too-comfortable middle ground. It gives me space to breathe, without letting me get up to much I find interesting. 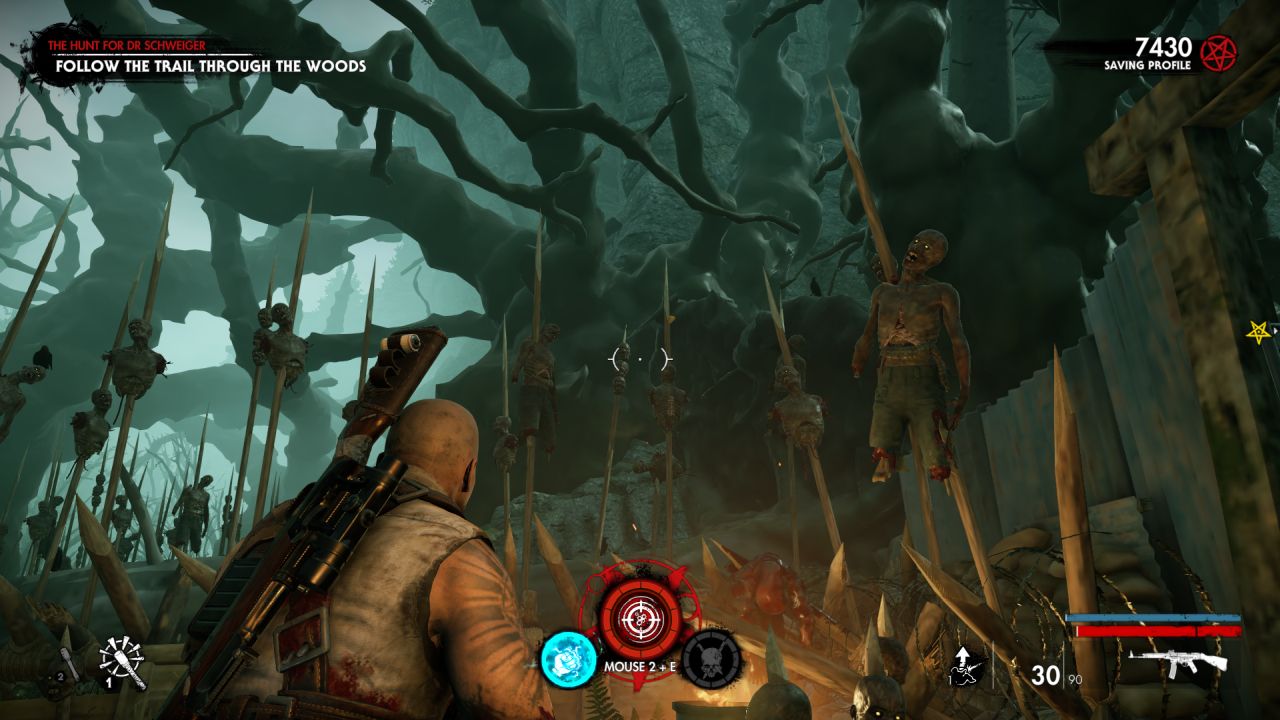 We come back to chips. They're the antipathy of interesting, but they are nice in small doses. Chewing through hordes is like tucking into mouthfuls of fried potato, every head-click delivering a little shot of dopamine. You get desensitised, though. You wind up bloated.

I haven't mentioned your (default) character, or anything about the plot, because there isn't much to either. You ping between explosive MacGuffins while listening to a stream of 'I no speak English good' dialogue, played for laughs that never come. Although I did like the part where my character walked into a room with a flayed corpse in the centre, tutted and said "who did this?", as if accusing multiple dogs of chewing up his shoe.

I probably should have swapped to one of the other characters, who your friends will inhabit if you play in co-op. I didn't get the chance to, but it's clear to me that you should. Every game is better with pals, but the mindless stretches of Dead War yearn to be filled with patter. There are even occasional voice lines that forget you might be alone, where my Russian-accented protagonist used a "we" to refer to his non-existent companions. That's a sloppy way to say 'you really should be playing co-op'. 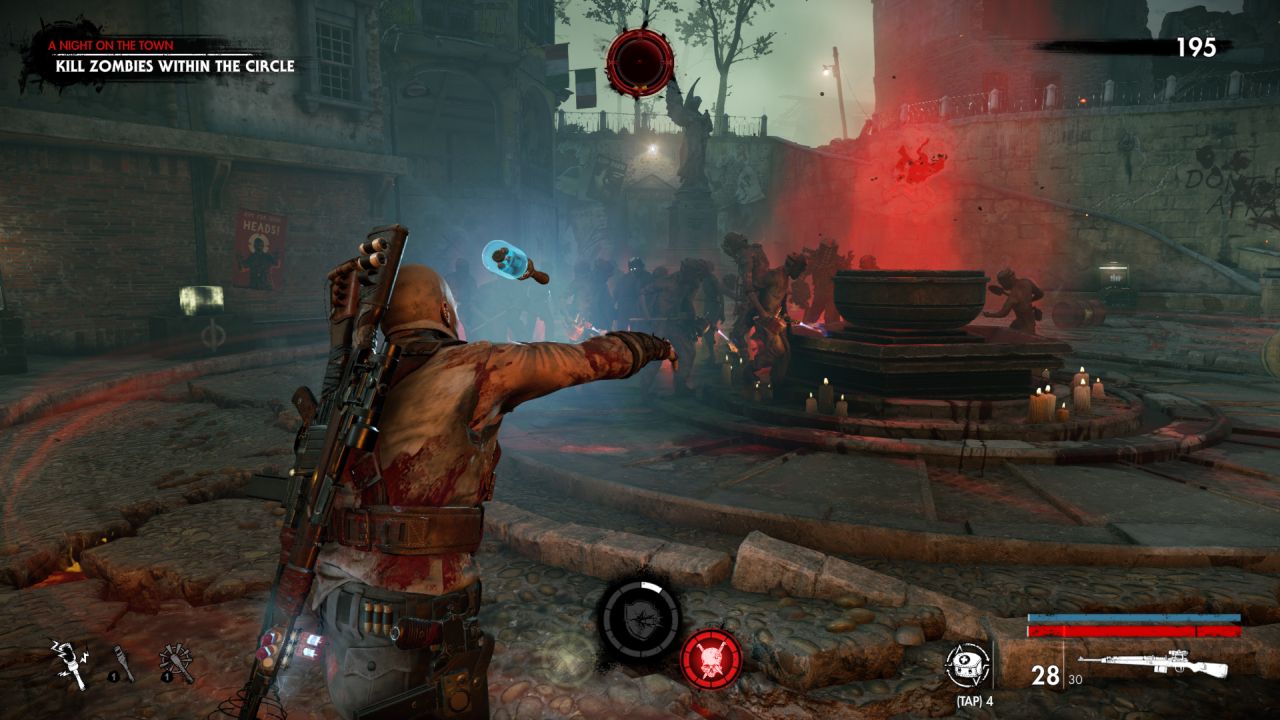 Some games are like chips. Even if you've got pals to play with, maybe wait until this one comes as cheap.

Disclosure: Nate Crowley, now our reviews editor, published two books with Rebellion publishing, and did some dialogue and world design work for their development arm.