Matthew played a preview of Gris and loved it, and John played a longer preview build of Gris and found it beautiful but empty. And after playing the full review build, wot I think is that it is empty, but I don’t mind that. It’s so beautiful that it functions as a thing just to be looked at, and that works even in the empty bits.

My problem is that at times Gris‘s beauty is terribly, painfully obvious.

That’s a tough one, isn’t it? Does obviousness make the beauty not count somehow? Because it is so beautiful. Gris (the girl) has tiny little hands and feet, like pins, and her cloak flaps as she runs along in a way that makes it seem that it’s impossible this is a game. It all moves with such grace that I think I sort of approached flow just by watching her pitter-pattering run. It’s clearly inspired by things like Journey or Abzu, but it’s 2D and has such fine lines it looks like it could all blow away. Later in the game you can sing, and that too, with the music, is excellent. You can also swim, or turn into a big heavy square block that has a nice BOOF feeling when you hit the ground. 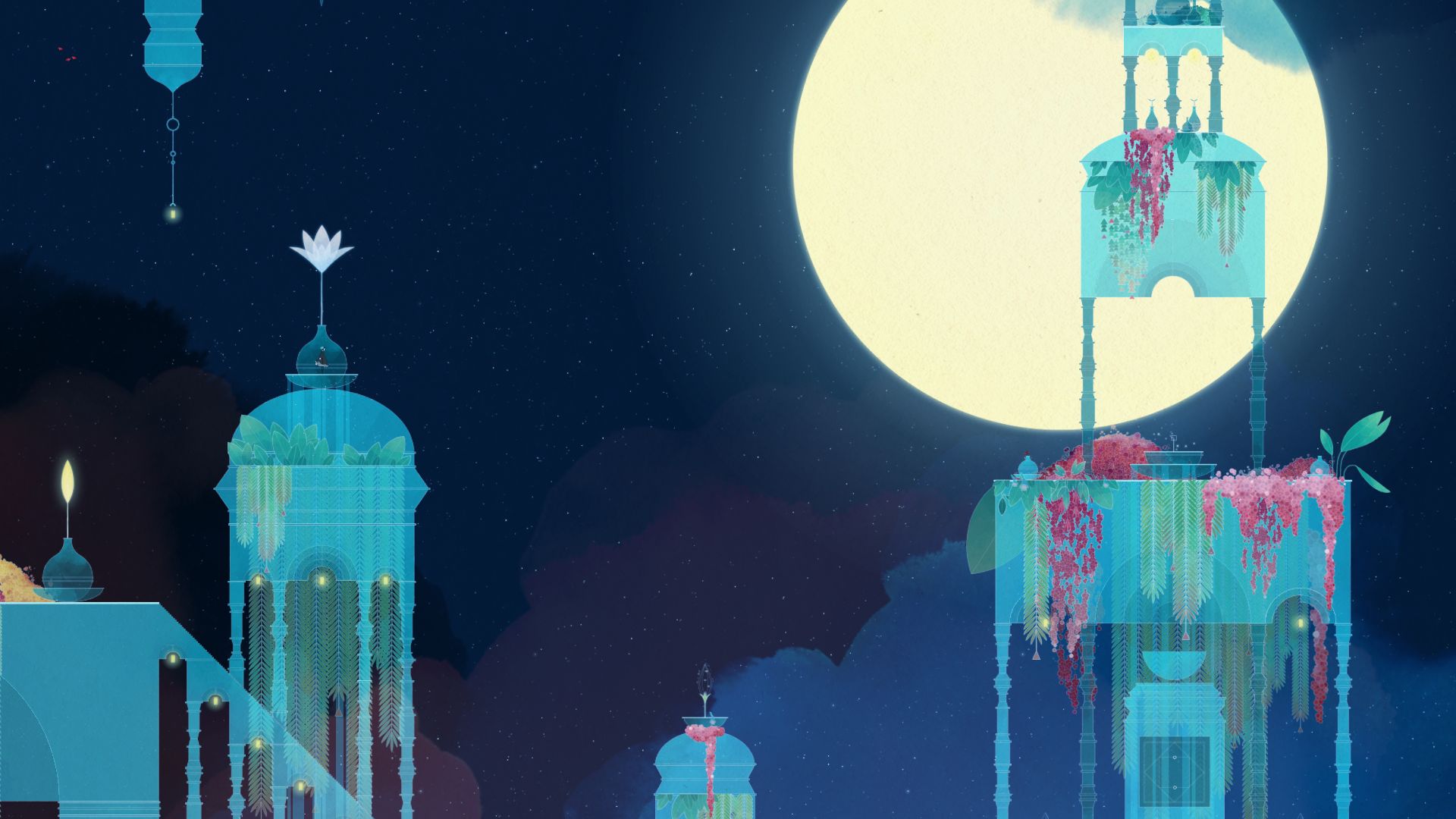 The attention to detail at every level of the look of the thing is so impressive, from the tiny critters who hide when you turn around, to the moving backgrounds in which you might suddenly notice e.g. a giant fish. The camera slow zooms in and out, either letting you focus on a small element — like Gris herself, or a hermit crab robot that burrows into rocks — or showing off a larger vista of the game, so you go ooooh! This latter bit is usually combined with the need to do some platforming, which is never taxing and always floaty, and usually involves hopping and skipping delicately on some square trees or bits of rock. 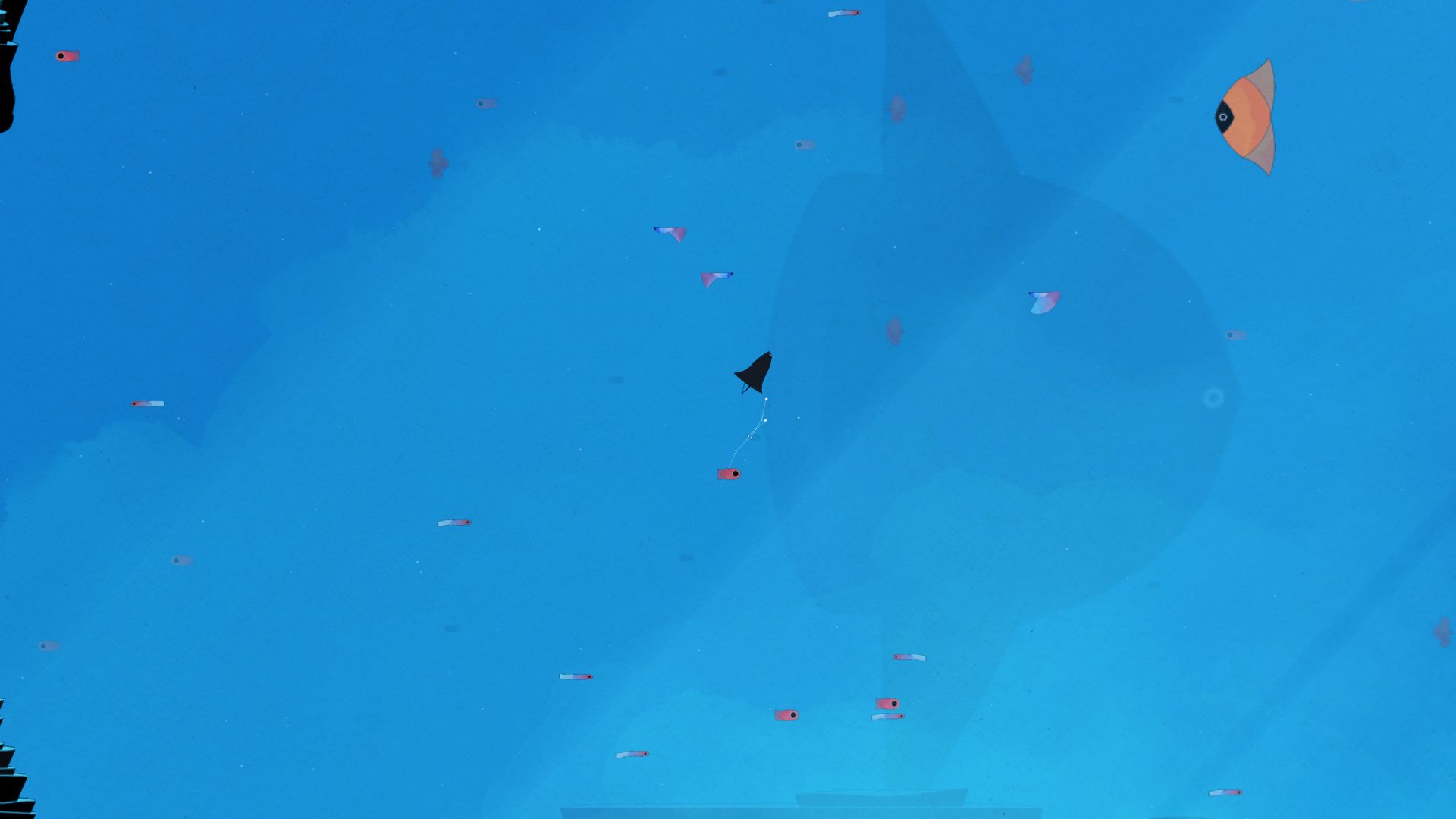 It’s hard to feel like you’ve failed. You can’t die in Gris, but it menaces you with a bird made of black goo (later an eel), clearly a girl’s grief made monster. There were a few times that it did genuinely make me jump, but in general you’re free to explore at your own pace. This works in keeping the game a relaxing, unstress-fest. It’s why I didn’t mind it being empty. A few of the platforming sections have a puzzle to figure out, but for the most part Gris doesn’t ask much of you, and five hours of an illustration I can move around in is the sort of thing I need during Christmas. But where that does get annoying is when the game pretends it has a fail state.

In one section you’re being chased by the eel monster, which is snapping at your heels, and you keep pressing the boost button to avoid its big eel-y mouth… but if you just put the controller down and don’t do anything you’ll be absolutely fine. Make a cuppa. Go and do a wee. No consequence. This chase lasts for several minutes, and once you realise the trick you feel cheated out of time that could have been spent running through groups of little mushroom critters, or doing underwater loop-the-loops in fields of coral.

The world of Gris changes dramatically. As you play, you run back and forth across the same landscape, unlocking more abilities and more colours, each layering a new element on the world. Gris only gets more lovely to look at as you go, until at the end you’re singing to open flowers just because, and jumping on translucent buildings that only bloom into life under a flash of light. And the colours blush over one another like clouds of watercolour paint. Oh, the aching prettiness! But this is also part of my greatest annoyance.

As I mentioned on the podcast last week, women come in three flavours, right? Feisty, overtly sexual, and traumatised. Gris is flavour three, and the game might as well be titled Kübler-Ross: Interactive Edition; the game has no dialogue and the story is supposed to be an abstract one, but in practise is so obvious that it might as well have annotations on the screen as you go. 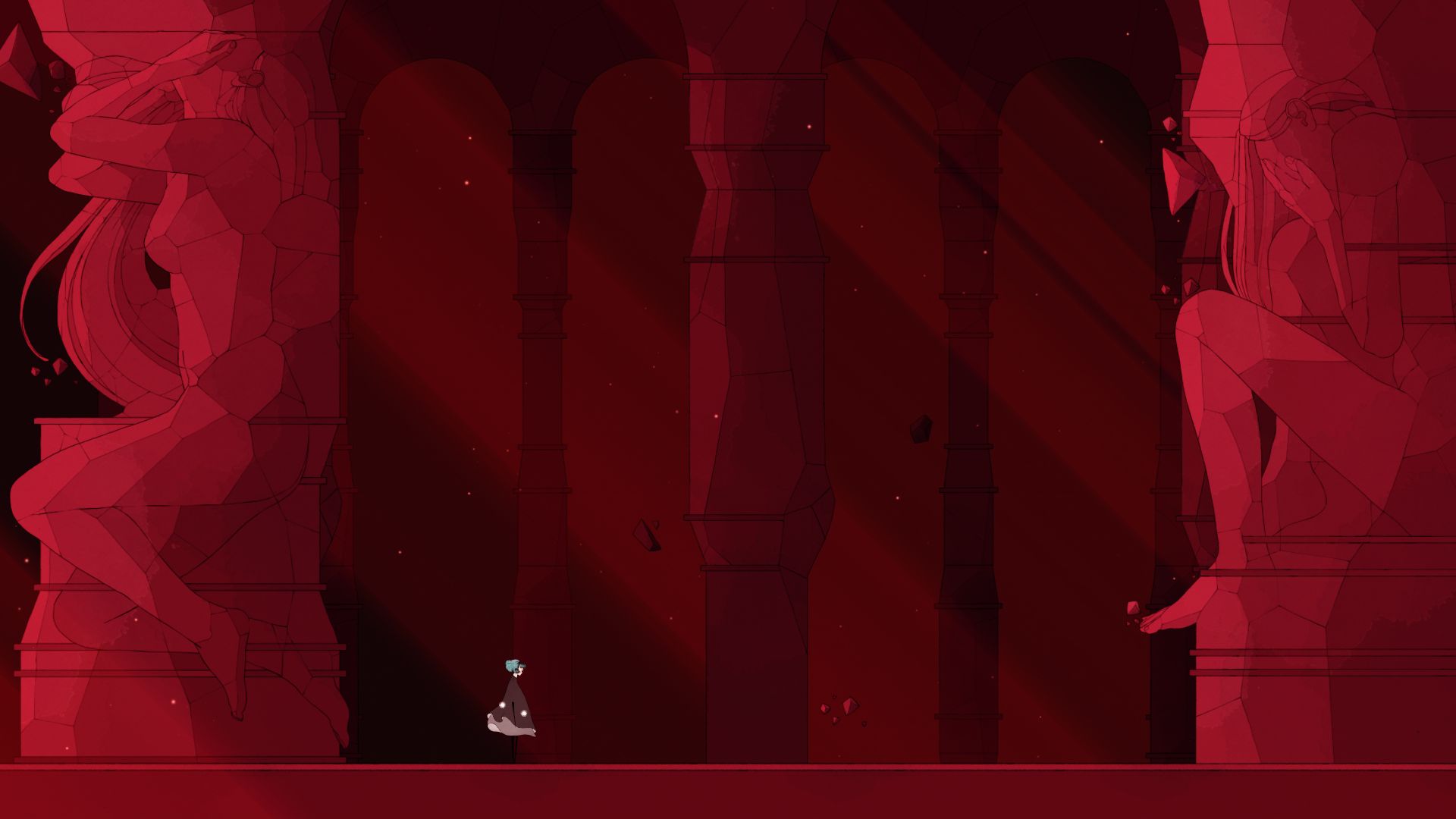 See Gris (a name which, incidentally, means ‘Grey’, my goodness) lying in the hand of a feminine statue. The statue crumbles! She tries to cling to it, but falls to the ground. All is black and white and grey — a colourless landscape. Any button interaction but moving forwards will cause Gris to sigh and fall to her knees for a moment. The first colour you unlock is Red, which turns the world into a desert savaged by howling sandstorms, obscuring all the screen with their redness. After this we get Green, which grows trees and grass and new flowers, swiftly followed by the underwater caves of Blue and the Yellow light of the stars and moon. But do you think there’s some kind of obscure, hidden meaning? Hm? Hmm? What a head scratcher. 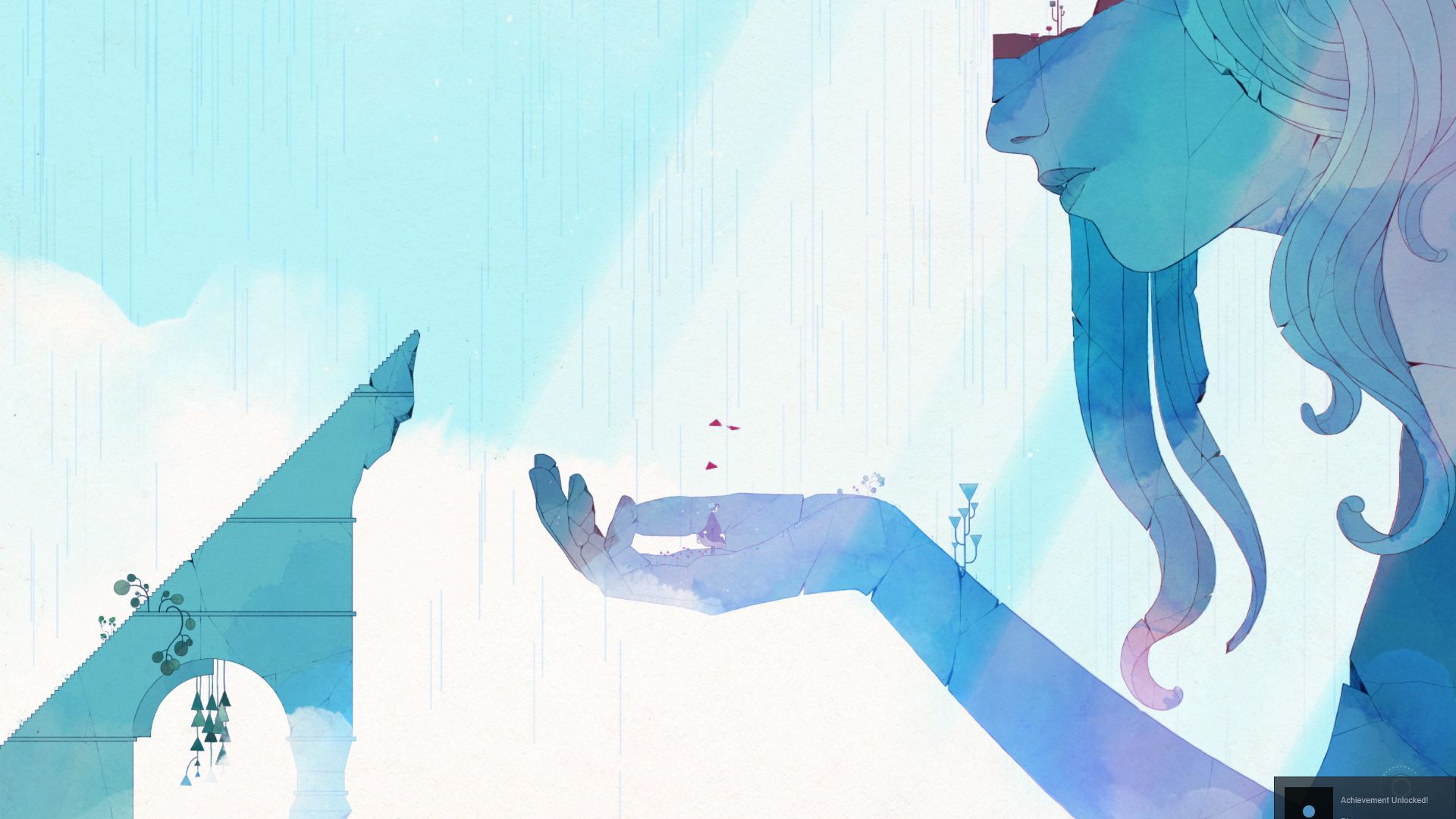 Each change is as undeniably good to look at as the last. They alter how you interact with the world — the Blue stage creates waterfalls that you can swim up and in the Yellow stage the delicate buildings are filled with singing birds to wake up. There’s a little robot pal that you feed square apples to in the Green stage. It’s wonderful, and then the game insists on putting in statues of women in various attitudes of sadness or agony, or a big stone coffin. At one point the grief eel changes to Gris’s own face. Yeah. Yeah I get it. I saw The Babadook. Sometimes it’s so hamfisted a metaphor that if you play it after being bereaved (spoilers for my life recently) you might even feel vaguely patronised.

I just wish they’d chosen a less obvious story or told it in a less obvious way — or just made it about a woman running around a pretty place. Make it about a magic watercolour land that needed saving from greyness! That would have been enough! Because it’s hard to overstate how impossibly beautiful this game is! How good the animation! I couldn’t look away from it even when it was making me roll my eyes! Like whatever the opposite of a car crash is! Sorry for shouting! I’m sort of cross with it! But also want to play it again! Because it might be the most stunning game I have ever seen! Argh!