Hello, it’s me, the resident BioLiker, here to tell you wot I think of Anthem, a game about which you probably already have opinions, whether you’ve played it or not.

Anthem is a shoot ‘n’ loot online game where you, a hero mercenary with a special mech suit, and a squad of matchmade or real life buddies save a lush alien world from certain alien doom. It is, basically, EA’s go at doing a Destiny game-as-a-service game, but they used BioWare to do it, so a lot of people are already upset it isn’t a new Mass Effect game, even though it was never meant to be. Like football, or rugby, or indeed anything with a half-time interval, Anthem is a game of two halves. To guess which one I liked more, ask yourself the following question:

When was the last time someone said ‘my favourite bit of a BioWare game is the combat’?

Not that the main story in Anthem is anything to write home about. It’s a sort of standard ‘big bad man is going to end the world, you’re a wisecracking gun for hire and must stop him,’ sort of thing. But Fort Tarsis really grows on you. It’s the hub you go to between missions (there’s a Launch Bay too, a version of the hub that’s supposed to be more social, where you can hang out with other players, but functionally it’s a grey box and everyone ignores each other).

At first I had barely any interest in it or its denizens, but as time went on I was impressed at how small stories were built, layer on layer, whilst making you feel like you were actually involved. Every time you go back to the Fort, there’s someone to talk to, all very pretty to look at and acted very well. Though you only have binary dialogue options, you can change how things flow, a little. You might persuade two women, who’ve both lost their businesses, to work together, and eventually a new bakery stall will appear in the market. The barman, voiced by Jack McBrayer, asked me for dating advice, which got worse every time I went back to chat to him. 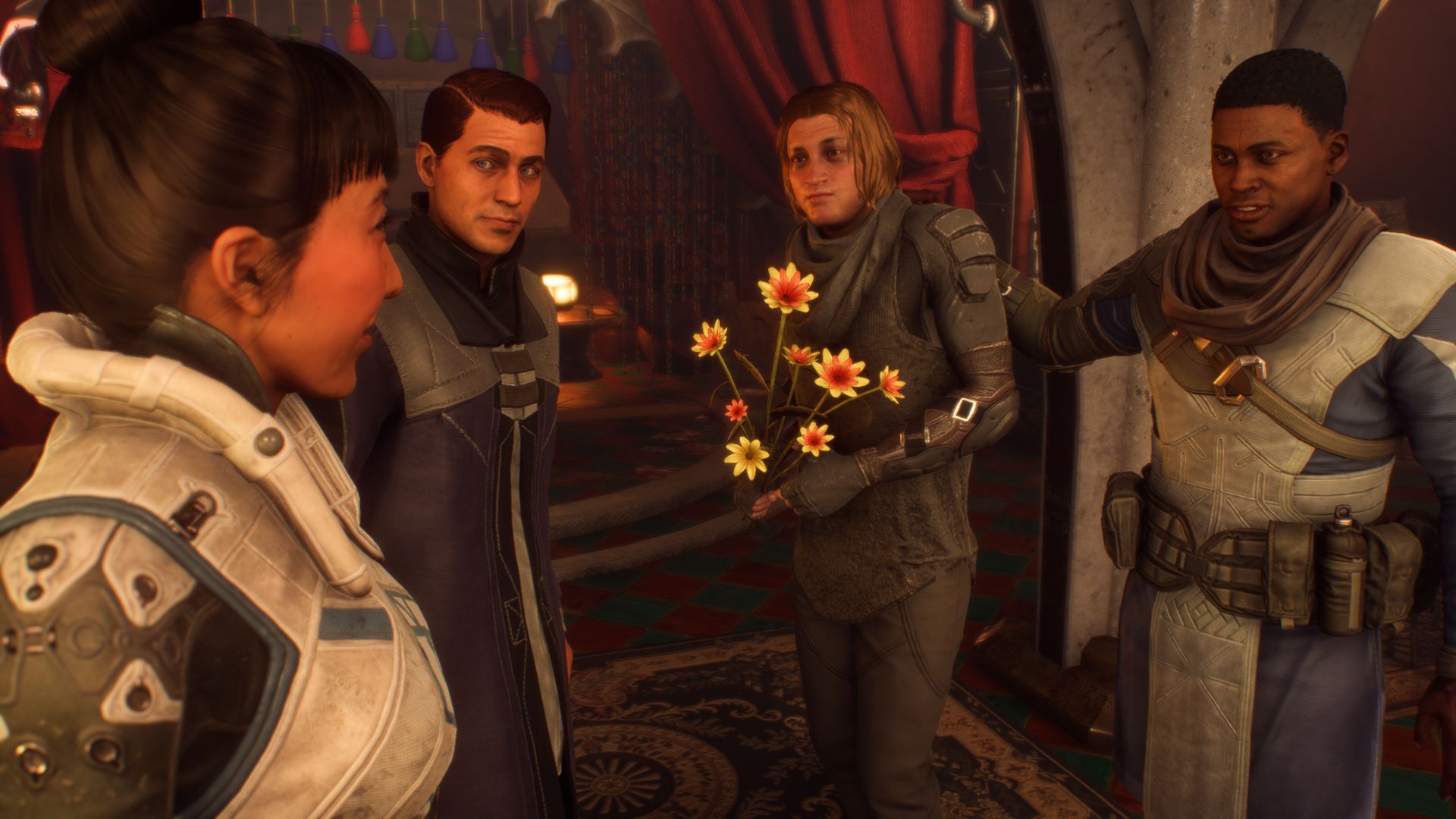 It took me ages to realise I had an email inbox in the game, which even includes a spam filter! And by the time I did realise, there was an email there that made me think “Oh no, if only I’d read it sooner, maybe…” These BioWare-y bio-bits are done with a shockingly light touch, and I was the more happy for them because they’re so well done in a type of game that doesn’t usually have room for something like a detective radio play, where the detective is an alien bunny. But ultimately it serves to make Fort Tarsis feel like a separate game, rather than making the combat side more interesting.

Anthem’s combat has most in common with Mass Effect: Andromeda’s rocket jumping shooty bangs, so it’s at least the best version of combat that BioWare have done for a long while. But still, the various guns you pick up all feel weightless and identical, a means to make magic numbers float in the air, rather than feel like you’re actually hurting a big frost dog or angry rock monster. It seems unlikely you’ll have a favourite gun in Anthem. It’s a bit of a downer in a shoot ‘n’ looter when neither of those are very compelling.

Luckily the javelins, the combat mech suits that are the new toy in Anthem to lure players from, say, Destiny, are good fun. They’re the star of the show, so the bulk of character customisation is reserved for your big metal babies. This is also where they’re trying to get you to part with your real life money. New fabric patterns or armour looks for your jav can be bought in the market; smaller cosmetics are easily afforded with in-game earnings, but the full armour pieces are pricey to encourage actual real spending. But when you combine all the different slots and materials and patterns and colours you get for free, you can create a beautiful monstrosity with no need to spend. It’s not really even noticeable in the middle of a firefight anyway — though the end mission screens end up as uniformly hilarious catwalks of four tasteless rides that have been very pimped. 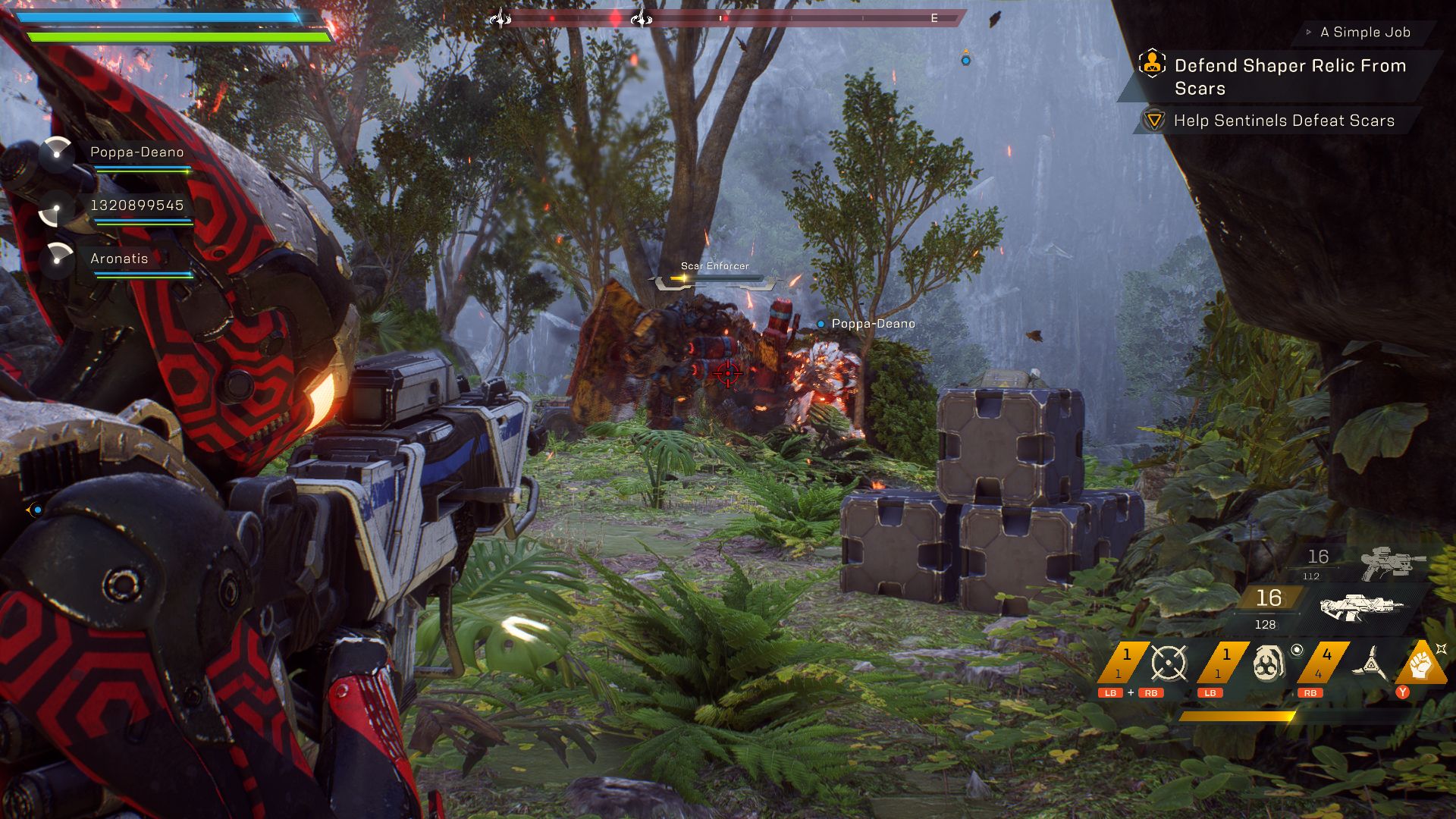 I’m a fan of the flying, though, because it does give fights an extra dimension (i.e. up), and there’s a kind of tethered freedom to it. You can zoom up and down, but must stay mindful of overheating, and if you go into free fall you suddenly feel very heavy. Each of the four javelins feels a bit different to drive, and can dramatically change how you’re playing. The Storm, my favourite, has you hovering over the battlefield, flinging out explosions and lighting like a one person artillery, while the nippy litter Interceptor encourages jumping in and out and around to confuse and flank, and the Colossus is a big heavy lad that lets you stomp around behind a shield and fire really big rockets.

Each has a different ultimate attack, and slots for special attacks that are unique to the javelin type — the Storm gets elemental attacks like enemy seeking fire explosions or ice lances, the Interceptor has throwing stars and poison grenades, the Colossus has, like, really big rockets — but the intricacies aren’t really explained. Creating damage combos is a key part of the combat, and attacks are assigned as either primer, trigger or damage to do this, but I neither understood that aspect of combos or even knew it existed until guides man Dave told me about it. On the other hand, the complexity of most missions boils down to wait for quest marker, follow quest marker, shoot enemies at quest marker. I imagine you’ll muddle through.

If it were just that, Anthem would be… fine. It’s a lovely enough place to action your way around. Ooh, look at that nice waterfall, those giant toadstool rock formations. But there are so many frustrations to fight through! So many little annoyances that add up to you getting cross whenever anything happens! There’ve been a couple of patches, including the big pretend day one patch, that have made the game more stable, but when I played over the weekend I still got bugs: I still lost all sound, I still got missions that didn’t trigger their completion, so the four of us stood around throwing emotes at each other, waiting for someone to leave first and break the others out of the bug.

Loading screens are shorter now, but there are still too many of them. Missions average about 15 minutes a throw, so proportionally you’re spending a lot of time doing fuck all in Anthem. You load into a mission, then don’t spawn on your squad, so they’re miles away and that triggers a catch up timer, before you then have another brief loading screen to spawn on your squad, like, ideally, you would do to start with. After a mission, you have to load in to your loadout, then load out of the loudout screen into the hub of your choice, to then launch a new mission and load into that. There’s no way to change your loadout on the fly between missions, or launch a new mission straight after completing one.

Say you want some uninterrupted play time. Freeplay lets you zip about the open world map and engage in world events, like how in Destiny some kind of something will happen on the way to your mission. Except, unlike in Destiny, you don’t get advance warning that an event is about to happen, it’s triggered by someone flying close enough, so your travels will be mostly aimless. And unlike in Destiny, only three other players will be in the world with you at a time, and unless you know each other you’re unlikely to actually play together, so the events are boring and take longer, and the whole experience is lonely and, again, frustrating. And to launch a proper mission you have to loud out of free play, back to the Fort or the Launch Bay, and then… It’s just tiny fiddly steps everywhere, tripping you up, getting in the way of you playing the game. Mounting, hair-tearing, exhausting, defeating frustration.

Reviewing a games-as-a-service game can be weird anyway, because they change. Anthem has already, in a week, and is going to change more over the next month (it has a roadmap). On top of that, with Anthem I feel there’s a lot to explain but not much to talk about, like watching a really involved reality TV show, and then realising that somehow nothing has happened over the course of an entire hour. I want to want to spend more time with it, because there are bits of it I really enjoy. But it needs more than the world map to change a bit, or have seasons, or better social interaction. It needs changes to how it actually works, which is a lot to ask. But the biggest fight I’ve had with Anthem so far is against Anthem.