As with last year, Valve have posted a look back at all of the changes to Steam in 2019 with a brief look ahead to 2020 squeezed in at the end. There are plenty of features you may or may not remember being added to Steam last year, among them changes to User Reviews. Valve claims they have utilized the new system for excluding anomalous barrages of negative reviews quite a chunk of times since implementing the new policy last year.

Mostly, Valve’s retrospective is a reminder of all the new features that they shipped for their store in 2019—from the Steam Labs, to new overhauled Library view, to Remote Play and all. Valve briefly reminds readers about their commitment to addressing incidents of “off-topic review bombing” when users attempt to affect the overall User Rating for a game with a simultaneous dump of negative reviews that don’t meaningfully critique the game itself.

This new system added a histogram view to the User Review section of a game’s Steam page. If a game has had an incident of review bombing, the graph will show an asterisk highlighting the affected time period. All reviews from that period, positive and negative, aren’t counted in the game’s rating. Review bombs are hidden by default, but you can still see those reviews and their effects by changing your settings beneath the graph.

Importantly, identifying these incidents would involve actual humans instead of just Valve’s usual machine learning solutions, though an algorithm does detect the anomalies before passing them up to a person. Valve say those very humans have suppressed 44 such incidents since implementing the new system last March. 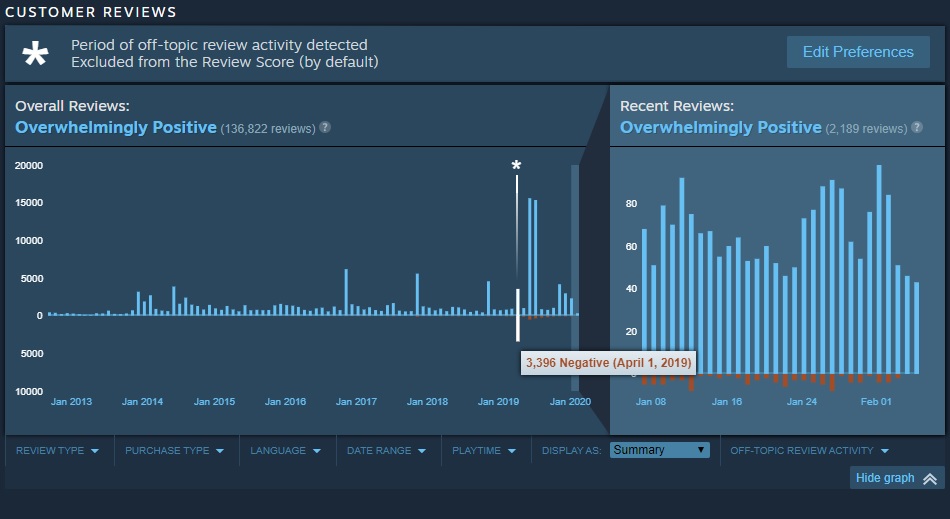 When it was announced last year, Dominic Tarason pointed out that Valve could very well focus efforts on large publishers that make noise about review bomb episodes and leave smaller indie teams out to dry. To his point, the only incident of Valve stepping in to mitigate a review bomb I’ve found is with the Borderlands series last April after its developers at Gearbox announced Borderlands 3 would be an Epic Game Store exclusive. Valve claim they’ve handled many more issues than just this one, though Borderlands seems to be the only widely-publicized case. Whether they’re helping the small games as well as the big ones is hard to say.

After looking at the past, Valve also take a short, bulleted look at the future. They highlight quite a few areas where they hope to make improvements to Steam during 2020. Steam VR 2.0 is in the works with customer experience improvements. Steam Labs has more data-driven experiments cooking in addition to the Interactive Recommender from last year.

More generally, Valve want to continue leveraging their internal data. “We’ve seen a lot of analysis from third parties that have taken a stab at figuring out how games are doing on Steam (and overall health of the platform), based on the limited amount of data that is publicly available. Since we have access to more data, we thought it would be useful to do our own analysis and share the results as a multi-part series of blog posts.”

You can read the rest of Steam’s 2019 year in review in Valve’s blog post.