Valve have finally admitted that 'review bombing' on Steam (leaving swarms of negative reviews for questionable reasons) is a big enough problem to have a human clean things up from time to time. According to today's store blog post, when a large, anomalous cluster of score-demolishing reviews happens, Valve will have "a team of people" investigate. If they decide that the reasons stated during that period are spurious enough to be considered 'off topic', then that entire cluster of reviews will no longer factor into the overall score, and the developer will be informed, though no reviews will be removed. Of course, this all hinges on Valve's definition of 'off topic'.

That definition of 'off topic' is predictably as vague as it gets. "We define an off-topic review bomb as one where the focus of those reviews is on a topic that we consider unrelated to the likelihood that future purchasers will be happy if they buy the game". While they don't give many examples of what fits this definition, they do consider complaints about EULA changes or DRM systems to be 'off topic' so will be excluded. As the review bomb filtering system just excludes a certain cluster of reviews from counting towards the overall score, this will also filter out any legitimate reviews during that period, but at least it will be across a period decided by real flesh-and-blood humans. 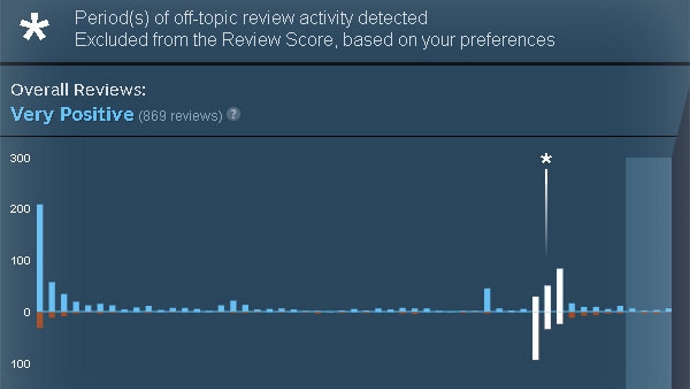 I will admit that this is a small step in the right direction, however belated. Valve's previous attempt to address the problem was just to highlight review bombs on a timeline of customer reviews, a move which I feel ironically just gave more attention to whatever the angry mob was yelling about that day. For users who enjoy seeing review scores plummet for awful reasons (excellent horror adventure Devotion was devastated after some mild political critique was found in it), Valve will be offering the option to ignore this new filtering and count every review equally.

User reviews are a sadly essential part of the Steam store ecosystem. Unless a game racks up sufficient user reviews, it's not allowed access to the full set of social features on the store, including achievement showcases, trading cards, etc - a problem that befell even the excellent Wandersong and many others. Not having sufficient reviews nets you a much lower place on store search rankings, and having a lot of negative reviews - whatever the reason - bumps games further down many lists. User reviews can sometimes be useful too, positive or negative - Rick Lane took a deep dive last year on the reasons people use the system.

Only time will tell whether Valve's review investigation teams will be able to clean things up, or whether they'll hand-wave issues and allow some game's user scores to be dragged down. I've also some concerns that they'll give more attention to big, profitable publishers complaining about review bombs over small, independent developers that are more vulnerable to these kinds of antics. I hope that I'm just being baselessly cynical here, and that everything works out under this new system, but we'll just have to wait to find out.