Acer are taking the phrase "desktop replacement" to a whole new level with the latest version of their Predator Helios 700 gaming laptop, as today they announced that the newest model of their flagship gaming machine will now come with one of their special, sliding HyperDrift keyboards to mimic the look and feel of a regular desktop keyboard. That's not all Acer are looking to replace, either. Thanks to the laptop's mechanical MagForce switches on the WASD keys, they're also hoping you'll be able to ditch your controller, too, as these pressure-sensing keys will supposedly be able replicate the fine motor control you get from a traditional analogue stick with the help of its optical laser technology.

Acer showed off the latest model of their 17.3in Helios 700 in their Acer Next livestream this afternoon, and from the looks of things the keyboard will be able to shift down from its normal, horizontal position quite easily should you want to turn its traditionally flat wrist rest into a proper angled one like a traditional desktop gaming keyboard.

The fancy HyperDrift keyboard isn't just for show, though, as sliding the keyboard forward also allows the laptop to pull in a lot more air to help keep its components nice and cool. It's going to need all the cooling it can get, too, what with it having a choice of either Intel's Core i9-10980HK or i7-10875H as its processor, and Nvidia's RTX 2070 Super or RTX 2080 Super as its main graphics chip. It will also support up to 64GB of 2933MHz RAM, too, as well as various combos of NVMe SSD in Raid 0 formation to help keep everything nice and nippy. As for the display, it will have a 17.3in IPS panel with a 144Hz refresh rate and 1920x1080 resolution, along with full Nvidia G-Sync support for super smooth, tear-free gaming. 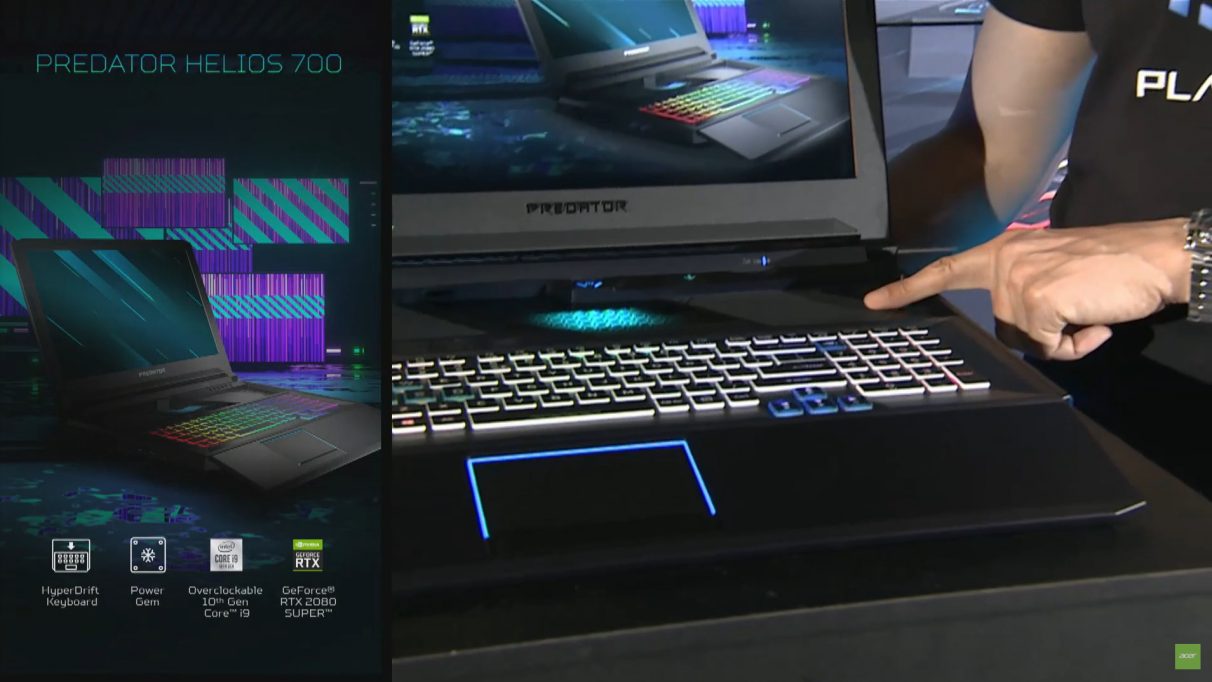 Acer have gone all out on their cooling technology for this 2020 iteration, too, as each spec will come with three copper heat pipes, a vapour chamber, as well as two of Acer's custom-engineered 4th Gen Aeroblade 3D fans. The top Core i9 model will also come with a new thermal solution they're calling Predator PowerGem, which allegedly has 3.83x more vertical heat conductivity than copper to help improve the laptop's heat emission efficiency.

Of course, you won't be stuck with those pressure-sensing MagForce keys if you find you don't on with them, as you'll be able to swap them out for regular WASD keys if you prefer. However, Acer are also throwing in another set of special keys geared toward racing fans as well on the Helios 700, which have been designed with a 1.5mm keycap curvature to make them feel a bit more like a steering wheel - if such a thing is possible. Of course, I'll have to reserve judgment on said keys until I'm able to try them out for myself nearer to launch.

Naturally, all these top notch components won't come cheap, as the Helios 700 is expected to cost a whopping $2500 in the US when it launches this August. No UK pricing just yet, but it's expected to come out in Europe a month later in September for 2700€.