Adeptus Titanicus: Dominus might follow the Warhammer 40K tradition of monumentally horrible titles, but at least it eschews the tired conflict between Space Marines and Orks. Inspired by the Titan Legions tabletop spin-off, the turn-based battles are heavy metal shootouts between towering mechanical behemoths, not puny humans or xenos. These war machines are as excessive as Warhammer gets, but Adeptus Titanicus is otherwise quite conservative. 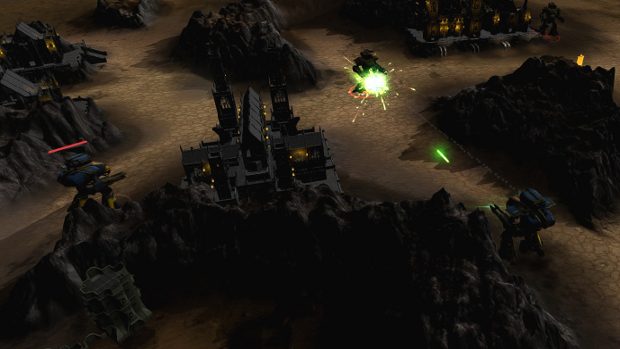 Titans are the Imperium’s nastiest and holiest weapons. You know they’re holy because the engineers stuck a cathedral on one of them. Not that the Imperium doesn’t stick cathedrals on things for literally any reason at all. The largest of the Titans are absurd walking fortresses, but most of them look like conventional mechs with a dash of Space Marine flair.

Adeptus Titanicus is one of the few proper Warhammer adaptations. It doesn’t just borrow the setting and some key concepts, it’s meant to be a faithful recreation, or as close to one as the developers can get on a PC. It takes advantage of the change in platform to push all the dice-rolling and maths off to the side, but in most other ways it plays like something designed for your dining table. 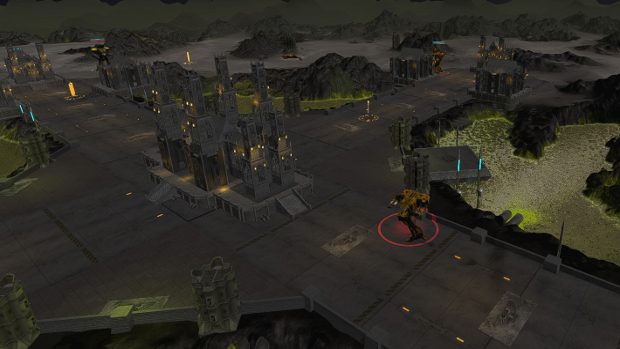 It looks like it, too. The maps are more elaborate than what you might be able to make at home (unless you’ve got a whole room and a bank account dedicated to Warhammer) but the buildings and terrain still look like props, peppering battlefields like big ‘COVER HERE’ signs. All three maps feel very artificial, which ends up making them easy to read, but also dreadfully dull. It's all dirt and same handful of gothic structures made to order for those in dire need of a place to fight. Perfunctory.

I know the overbearing grimdark stuff can be exhausting, but I’m certain that a lot of the people who think Warhammer is aesthetically boring are mostly being informed by the games, which are almost uniformly plain. It's a setting where even the rulebooks and army indexes are overflowing with world-building and character, but surprisingly little of it seems to spill over into the games. You can put Adeptus Titanicus on the list now, too. 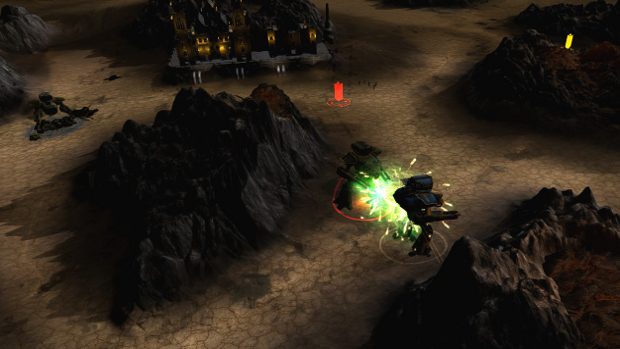 Three of Titan Legions’ classes are present, though lamentably not the one with the cathedral hat. If you’re frugal, you can field up to nine Titans, split into three squads, each laden with apocalypse launchers, inferno cannons, laser blasters and countless other murder tools. They’re begging to be customised, but you can only pick between three prebuilt loadouts.

With no other factions beyond the Imperium (you can play as Chaos in online battles, but that just means new paint jobs), you’ll be fighting in and against the same three Titans again and again. The weapon loadouts should introduce some more variety, but I’ll be honest: I have no idea what most of them actually do. 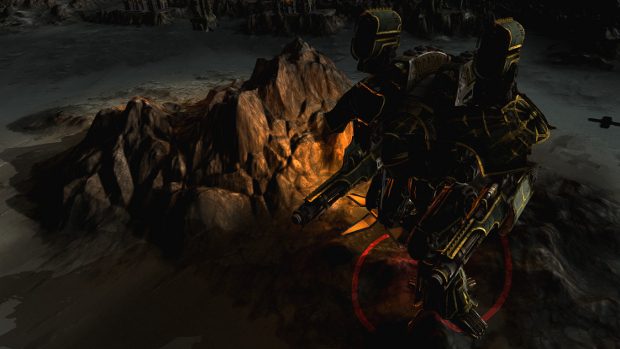 Every weapon has a range, rate of fire and level of proficiency against heavy and light enemies, but the unit screen’s complete disregard for context makes knowing if you’ve constructed an effective squad of death machines tricky. Tabletop rules can be equally Byzantine, but at least the stats are accompanied by giant wads of text. 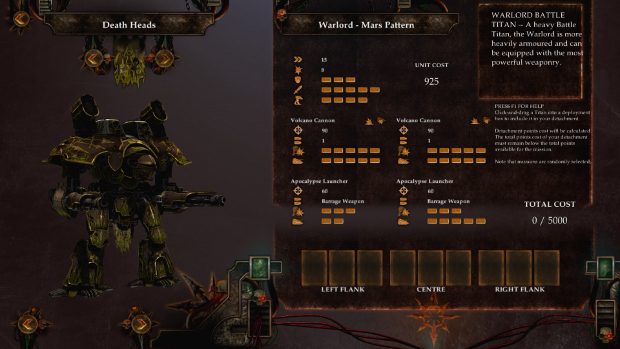 So when I entered my first post-tutorial battle, I did so with no idea what my team of Titans were packing. It went swimmingly! The AI wasn’t quite with it, I’m afraid, though I’m sure it was also because of my extraordinary mech manoeuvring skills. I’ve been in some battles. I’ve seen some stuff. I will at least concede that I was assisted by Adeptus Titanicus’ extremely helpful targeting system.

When you target an enemy with one of your Titans, you’ll see lines connecting each of the Titan’s guns to the enemy, simulating the trajectory of the projectiles. These trajectories are colour-coded to let you know if the target is obstructed, not in range or right in the sweet spot. If none of the lines are green, you can order the Titan to move, creating a hologram with new targeting information. It lets you test out all your manoeuvres before committing, and while there’s still an element of RNG, it removes a lot of uncertainty. 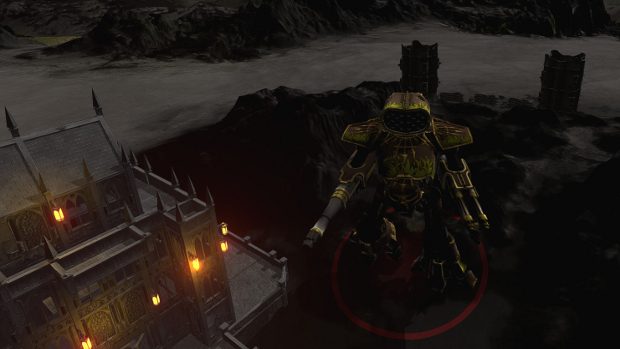 Moving and attacking are all done in a single phase, with Titans constantly blasting in-range targets for their entire 10-second turn. When you’re ordering your Titan to go for a walk, you’ve also got to take into account how much of that walk gives it a clear view of its target. Matches only last a handful of turns, so naturally you want to make sure that the guns are firing away for the whole 10 seconds. If you only manage to land a few hits, you’ll be judged by some floating red text that lets you know you did a bad job and should be ashamed. It’s a bit disheartening, honestly, but the Imperium is a tough place.

Even though Adeptus Titanicus unifies the two actions, there’s still a bit of friction, forcing you to make the odd sacrifice or pick between mobility and offence. Reinforcing an ally or moving towards an objective might also put a mountain between you and an enemy you could otherwise destroy. If speed becomes a necessity, you can sacrifice your attack entirely, dedicating all of your Titan’s power to marching across a huge distance. Alternatively, staying right where you are can give you an attack bonus or, if there’s nobody nearby, let you set up an ambush by using overwatch. 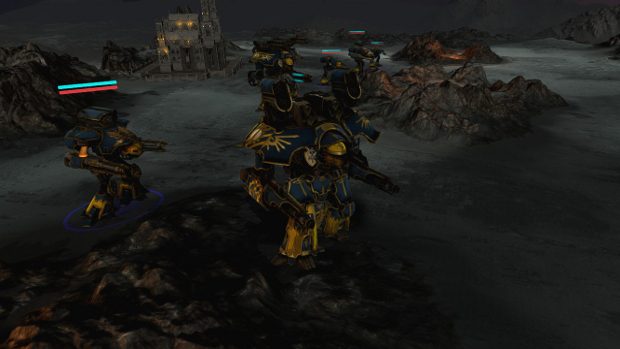 There’s a lot more to the system than it at first suggests, then, though the absence of melee combat fills me with sadness. It’s unfair to the mechs. They love to brawl. There’s even a melee stat, just sitting there, impotent but hopeful. And hopeful it should be, as melee combat and close-quarters firefights are due in the next update.

My desire for some Titan boxing is probably somewhat related to the lack of thrills during the shootouts. Once all the planning is out of the way, you’re just watching a mech spewing neon at another mech, which is utterly disinterested and seemingly unaffected until it either does or does not explode. It's all very anticlimactic. Watching robots smashing each other to bits is the only good and pure thing left in this world, so I perhaps set my expectations very high, but these Titan firefights aren't thrilling by any metric. 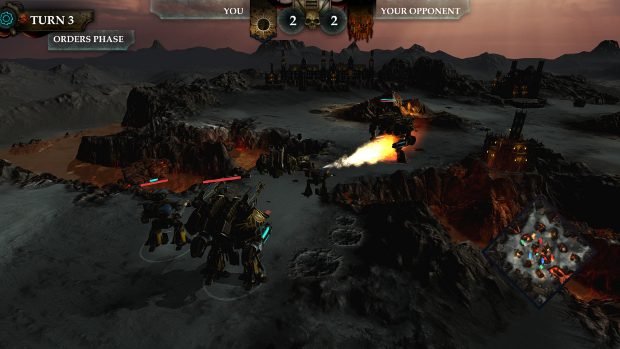 Trying to figure out how effective the attack was is a tricky task, as well. Each Titan has tiny health and armour bars, but information is otherwise sparse. There are definitely things going on, numbers being crunched, criticals being rolled, but apparently that’s privileged information.

It’s been streamlined, says the developer, but streamlining looks a lot like hiding numbers that make the game run. Like the unit screen, it’s obfuscation masquerading as simplification. I’m always happy when something offers to take calculating hits and damage off my hands, but I’d still like to know the result. Show me your working, too. I’ve become my high school maths teacher. Thanks for giving me a new low point, Adeptus Titanicus. 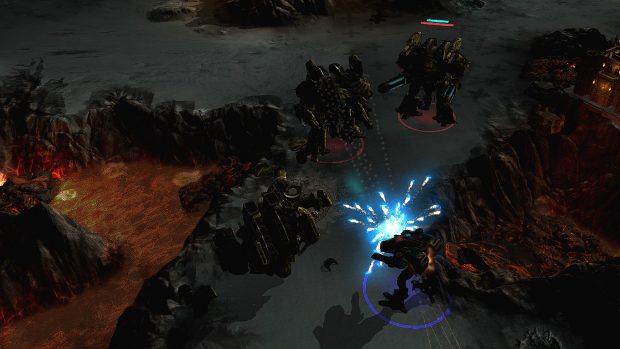 The half-hearted scenarios and random skirmishes don’t really encourage pulling up a chair and sticking around, which probably explains why I’ve struggled to find multiplayer fights. A campaign is in the works, which will hopefully imbue Adeptus Titanicus with some of the personality it so sorely needs, but I’m afraid it will be added to the large pile of Warhammer 40K games whose names I’ve entirely forgotten long before then.