The new Alienware m15 is quite possibly one of the loveliest gaming laptops I've ever tested. I'm a sucker for anything red (it's my favourite colour) but when you stick it on a chassis that stands just 21mm high off the ground and weighs a comparatively non-brick-like 2.16kg with a Core i7-8750H and a GTX 1070 inside it, you have my full and undivided attention.

It's a gorgeous thing to behold and comes as standard on each model with a 144Hz refresh rate display, just to make its 15.6in 1920x1080 resolution feel extra special. UK Alienware m15s have the best deal of all, though, as here you can deck out each and every configuration with this stunning 'nebula red' option (even saying it sounds beautiful) for absolutely nothing. I remember the days when Dell's colour options used to cost the earth on their everyday laptops, so this is welcome news indeed. None of this 'epic silver' (i.e: grey) nonsense for us, no sir.

US m15s aren't quite as generous with their various colour options unfortunately, but they do have the added bonus of a third graphics chip option compared to UK configurations, as they can choose between a Max-Q'd GTX 1080 in addition to the standard full-fat GTX 1060s and Max-Q'd GTX 1070s.

As mentioned above, I was sent one of the latter chips for review, which will set you back at least £1799 in the UK or $2019 in the US depending on what RAM, storage and display options you pick. The only thing you don't have a choice in is the processor, as every model comes with an one of Intel's six-core 2.2GHz Core i7-8750H processors as standard. 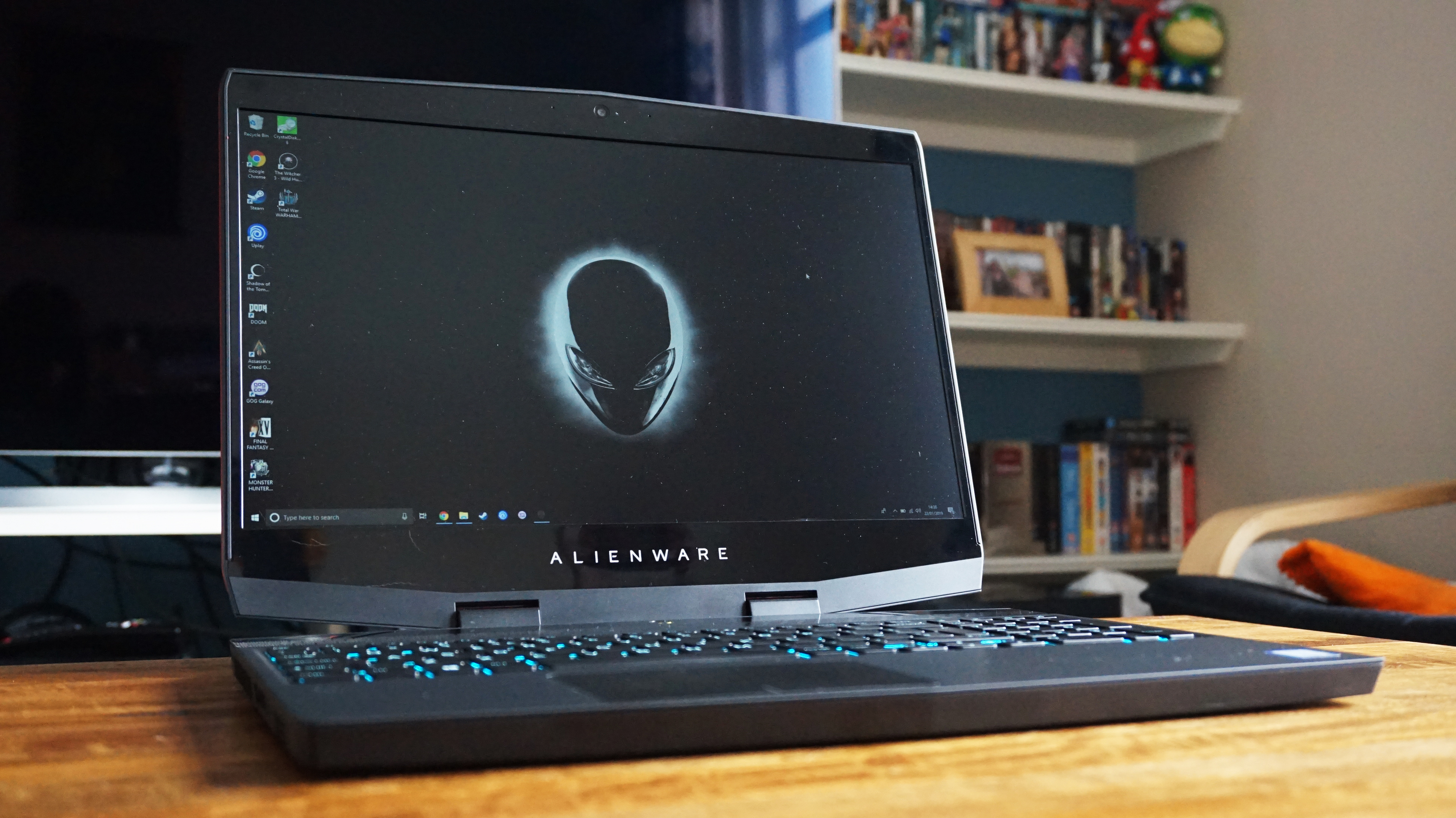 That's a pretty potent combination when you pair it with a GTX 1070, even if it is in its energy efficient Max-Q form, although I'm still not sure it's quite potent enough to really make use of that 144Hz refresh rate. At least when it comes to playing the latest blockbusters, that is.

In most cases, for instance, getting a lovely smooth 50-60fps on max settings wasn't a problem for the GTX 1070-equipped m15. Shadow of the Tomb Raider bandied along quite happily at an average of 55fps in its tough Cozumel cave section and 51fps in the busy, crowded streets of Cozumel town square, and that was with its top SMAAx4 anti-aliasing option enabled as well. Knock that down to single SMAA and you're looking at a consistent 65-80fps across the board.

Total War: Warhammer II put in an equally decent average of 50fps in its Ultra-fied battle benchmark, which then rose to an even silkier 67fps when I turned the quality down to High, and even Monster Hunter: World dished up a pleasingly smooth range of 45-60fps on Highest when I was jogging around its dense undergrowth. The frame rate didn't falter when big monsters entered the scene either, although for the best frame rates you'll want to opt for High where you can slice and dice up its dinos at a slick 70-82fps.

Final Fantasy XV didn't get much beyond 60fps on either High or Highest, with both quality settings settling around the 56-65fps mark with all of Nvidia's fancy HairWorks, TurfEffects, Shadowlibs and VXAO effects turned off. Speeds took a bit of a tumble when I started switching on HairWorks and TurfEffects, with both quality settings once again producing similar-ish results in the 40-48fps region, but I'll admit this is quite a big ask for even some of today's desktop-grade graphics cards, let alone trimmed down Max-Q laptop chips.

Indeed, the only games that really made the most of that 144Hz headroom were Doom and Forza Horizon 4, with the former speeding along between 100-120fps with fleeting highs of 140-odd, while the latter hit an average of 82fps on Ultra and 102fps on High.

This is fine if you play a lot of low-intensity esports games and fast-paced shooters, as these are the sorts of games that are much more likely to hit those high frame rates compared to your graphically-intense blockbusters. Older games are probably a good fit for revisiting in 144Hz as well, as even the HairWorks-ified Witcher III managed a lovely 57-81fps on Ultra.

I've removed my Assassin's Creed Odyssey results from this review, as I've since been informed that the frame rate stutter I've encountered in this and other gaming laptops is, in fact, a bug in the game and nothing to do with the laptop. It's in the process of being fixed, but until then the game won't be appearing as part of my laptop benchmarking results. Read more here.

However, if you're looking to buy an Alienware m15 with the latest and greatest blockbusters in mind, then you'd probably be better off saving yourself a bit of cash and opting for one of the 60Hz panel specs instead, as I simply don't think you're going to get much out of it unless you start compromising on quality (which then begs the question why you've stumped up the cash for a GTX 1070 laptop in the first place).

Its Intel Core i7-8750H is also one of the more powerful CPUs you can get on a laptop these days, so it should be up to snuff when it comes to gaming. I certainly didn't seem to have much problem with it for everyday tasks, and it put in a good performance when I ran it through Cinebench R15's benchmark as well, scoring 167 in the single core test and 1101 in the multicore test.

The only thing that really held me up when using the Alienware m15 as an everyday laptop was its mildly irritating keyboard layout. The keys themselves are great, and I actually infinitely prefer them and their firm, tactile feedback to the slightly naff, ineffectual, maybe-you-pressed-this-maybe-you-didn't keys on my own Dell XPS 15 that I bought just before Christmas.

They're great keys for typing on, but good gravy the layout. The left Shift is too small, which means I keep pressing \ when I want to capitalise a letter, and the 0 on the number pad also doubles up as Insert, despite that function already being the secondary function of the Delete key.

I'm sure it's something I'd probably get used to over long-term use, but the addition of the number pad certainly makes it feel a fraction more cramped than my number pad-less XPS 15. Still, the important thing is how they keys actually feel, and on that point I have no complaints at all.

I'm also pleased to report that Alienware have put a decent screen on the m15 as well this time, which is a relief after the rather sub-par displays on Dell's Inspiron Gaming line. It's no Alienware 13 OLED beauty, but with 85% of the sRGB colour gamut under its belt (which I should note is a lot higher than Dell's own 72% figure on its specs sheet), it's up there with the HP Omen X 17 and Asus ROG GL702ZC as one of the more accurate laptop displays I've tested so far.

Indeed, combined with its high, maximum brightness of 312cd/m2, colours looked lovely and vivid in games and on the desktop alike, and its high contrast ratio of 1355:1 meant there was plenty of detail to be found in darker, shadow scenes. Said shadows were also lovely and inky thanks to the screen's low black level of 0.23cd/m2 (the closer to 0.00cd/m2, the better), and the screen's wide viewing angles made it very easy to get the screen in a good position, too - which was aided in no small part, I should add, by its incredibly flexible hinge.

As for storage, the Alienware m15 comes with a myriad of options ranging from traditional HDDs in the US to single and double NVMe SSD combos. My review sample came with a pair of 512GB NVMe SSDs, providing plenty of space and buckets of speed for games and photos alike. However, if you do plump for this particular model, however, I'd recommend installing your games on the second of its two 512GB PCIe SSDs, as this scored faster random read and write speeds (43MB/s read and 102MB/s write) in AS SSD compared to the primary drive's 36MB/s random read and 93MB/s random write.

Overall, there's a lot to like about the new Alienware m15. I'm not convinced you really need to spend the extra getting the 144Hz refresh rate panel, especially when in the UK you can still get it in that lovely nebula red chassis no matter what configuration you pick, but the world is a better place when it's got more red gaming laptops in it, and the Alienware m15 is just too lovely and slim to shove in the gutter.