Most gaming laptops are Intel this and Nvidia that these days, making the fully AMD-powered Asus ROG Strix GL702ZC something of a rarity. Indeed, while AMD's Ryzen CPUs may be a familiar sight on desktop PCs, this is the first time their top-end Ryzen 7 1700 chip has been taken out for a spin in laptop form, making it an admirable adversary for its Intel Core i7-7700HQ-equipped competition.

I say sort of take on the go, because any laptop with a giant 17.3in display naturally comes with a few portability issues. Yes, it's easier than carting an entire PC round in a suitcase, but when the GL702ZC weighs a whopping 3kg (or more when you factor in its jumbo power supply) and has a footprint measuring 415x280x34mm, you'll still need some fairly hefty transportation apparatus to save yourself from crippling your back and shoulders. Really, this is a desktop replacement laptop, as its measly battery means you'll need to keep it plugged in pretty much all the time.

At least that giant screen is fairly pleasing to look at. While my i1 DisplayPro calibrator showed its IPS panel is only capable of displaying a rather middling 83.9% of the standard sRGB colour gamut, the screen's high peak brightness of around 400cd/m2 meant that colours still looked like they had plenty of pop and vibrancy. They lost a bit of lustre when I lowered the screen brightness down to about 50%, but on the whole it's a screen I'd be perfectly happy looking at for both work and play - particularly when it also supports AMD's FreeSync tech to help eliminate screen tearing and stutter. 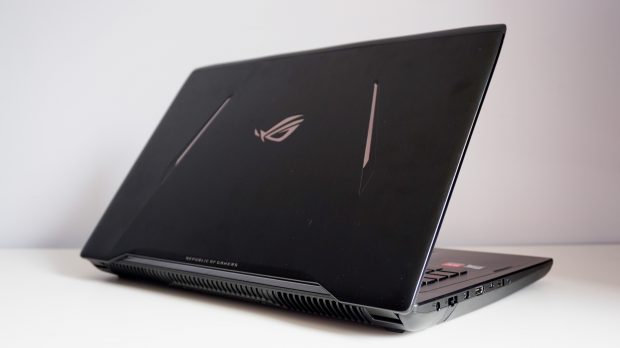 Black levels were also a reasonable 0.44cd/m2 (the closer to 0.00cd/m2, the better), and the GL702ZC's high brightness helps compensate for its slightly lower than average contrast ratio of 894:1. Indeed, when I booted up Little Nightmares, the dark mist swirling around the mysterious Lady figure in the game's opening sequence showed no signs of disintegrating into horrible, obvious bands of shadow (as I've seen screens with lower contrast ratios do in the past), and there was still a decent amount of light and dark detail to be seen in the game proper.

Of course, considering the GL702ZC costs a reasonably steep £1300 / $1500 (although not as ludicrous as the £3000+ MSI GT75VR Titan Pro), you might be disappointed to hear it only comes with an RX 580 graphics chip as opposed to something a bit beefier. However, since the GL702ZC's resolution only stretches to 1920x1080, pairing it with an RX 580 makes a lot of sense, as I was able to play most of my gaming test suite on the highest graphics settings available without much trouble.

Hitman, for instance, sailed through on Ultra at 1080p, regularly hitting an average of around 58fps, and Doom similarly never dipped below 60fps when kneecapping Ultra-fied demons in the face. Likewise, Wolfenstein II coped extremely well with its top Mein Leben settings, occasionally dropping to around 40fps when wandering through its submarine hub, but the frame rate often settled around 55fps when I was dealing with actual combat. 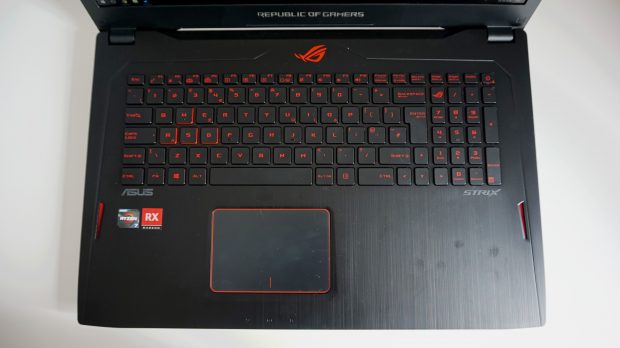 Rise of the Tomb Raider's tough SSAAx4 anti-aliasing proved a little too much for the GL702ZC at times on Very High, averaging around 35fps across its three benchmarks, but opting for its basic FXAA instead saw the frame rate practically double to a silky smooth 65fps average, meaning I didn't have to compromise on overall graphics quality.

Naturally, there will always be some games that require a bit more tweaking. Middle-earth: Shadow of War, for instance, felt much more comfortable on High compared to Ultra, as it was only here that I was able to get a full 60fps. On Ultra I still managed to get a perfectly playable 40-50fps, but frame rate fiends may not find this up to their exacting standards.

A similar story played out on The Witcher III. Ultra saw Geralt jog along at around 40-50fps, but dropping the quality down to High instantly restored him to his 60fps best. With Total War: Warhammer II, on the other hand, I had to settle for Medium to get anywhere near this kind of speed, as my Lizardmen could barely muster the strength for a 30fps spear swing when I attempted to do battle on Ultra. 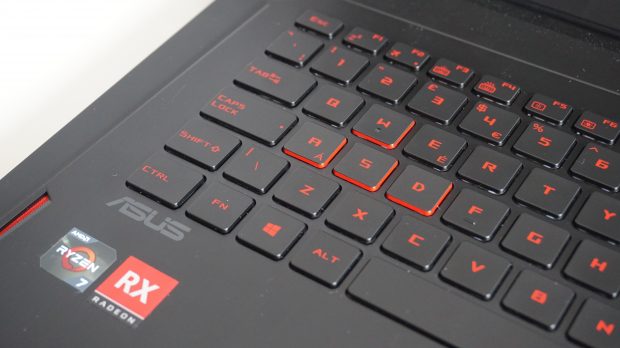 In fact, it was only Assassin's Creed Origins that really saw the GL702ZC work up a sweat, as High returned a clear 'Unstable' verdict from its built-in benchmark, despite running at an average of 44fps. Indeed, even dropping it all the way to Low didn't improve things much. The game was declared 'Stable', but the frame rate only nudged up to an average of 50fps, with town scenes dragging it down as low as 30fps.

Fortunately, the GL702ZC handled the beastly Final Fantasy XV much more efficiently. While Highest floundered between rough lows of 30fps and fleeting highs of around 48fps, Average saw Noctis and his pals glide around Lucis at a smooth 55-60fps, saving you from having to deal with its rather horrid, flat-looking Low setting.

On the whole, then, the GL702ZC is a highly capable 1080p machine, and its handy combo of a 256GB SSD and 1TB HDD should give you plenty of space for storing all your games, too. 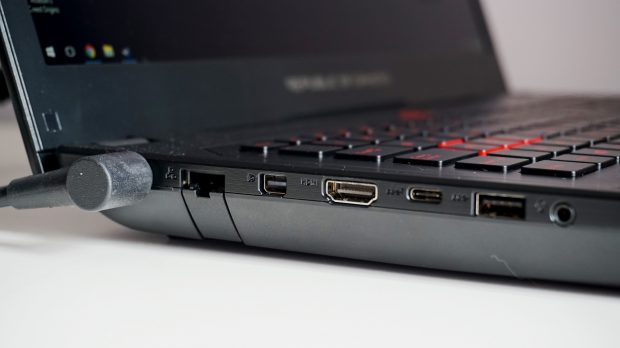 Its octa-core 3.0GHz Ryzen 7 1700 CPU and 16GB of RAM also give it a lovely bit of processing heft for more everyday tasks like photo and video editing, and its multicore performance in Geekbench 4 easily outstrips its common Intel-based rivals, the Core i7-7770HQ and Core i7-7820HK. Admittedly, its single core score was roughly the same as these particular chips, but overall it still felt perfectly nippy and responsive during daily use.

My only real beef with the GL702ZC is its keyboard. The low, backlit chiclet keys gave plenty of tactile feedback, but their close proximity to the squished in number pad on the right meant I was constantly hesitating or hitting the wrong keys when I wanted to find Enter, Delete and Backspace. Given the ample size of the keyboard tray, a little more breathing room wouldn't have hurt. 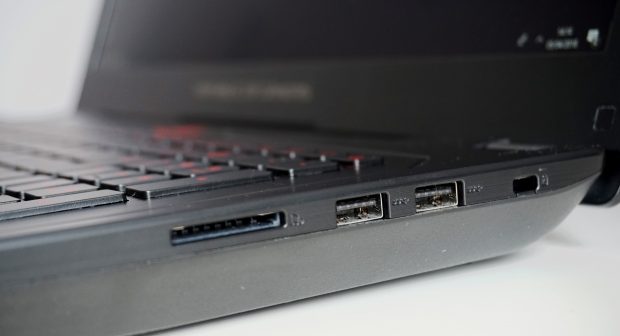 Likewise, the fact all the keys are located so high up on the keyboard tray meant that I had to rest quite a large portion of my forearms on the laptop's hard lower edge. This became quite uncomfortable after a while, although those with larger hands may not have this problem. Still, if the keys had been placed just a little lower down, then I'd be a lot happier recommending it for long gaming sessions. At least the generous touchpad didn't pose any problems, although I'm sure most of you will be plugging in a mouse as soon as you crack it out of the box.

You're fairly well catered for in terms of ports as well. While I might have liked a fourth USB port, the presence of a USB Type-C port is a welcome extra to its trio of USB3.1 slots. You also get a full-sized HDMI output and miniDisplayPort for connecting it up to an external display, as well as an SD card reader, a Gigabit Ethernet port and a combined headphone and microphone jack. 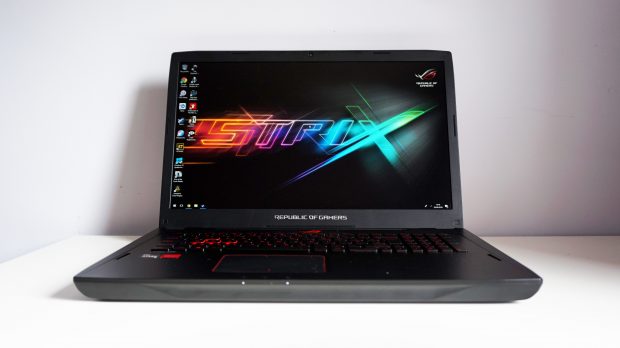 Is the Asus ROG Strix GL702ZC a good buy, though? The similarly priced and Nvidia GeForce GTX 1060-powered Dell Inspiron 15 7000 I reviewed earlier in the year has the edge on performance, but its screen was so terrible that I'd rather give up the extra frames for the GL702ZC's nicer looking display. Then again, the keyboard on the GL702ZC is an equally big turn off for me, and a large part of me just wants to chuck both of them in the bin and shell out the extra cash for the lovely little Alienware 13 and its juicy OLED screen. It's a no-win situation, really.

All things considered, though, you should probably go with the Dell Inspiron 15 7000 if you're after the best graphics performance around the £1300 mark, as I was able to get more out of it with fewer settings changes. If only I could have the Asus ROG GL702ZC's screen at the same time...