Bullets tear across a sweating dancefloor, heaving with bodies. Flashes of metal and flesh, lights pulsing and skittering across glistening bodies. All Walls Must Fall's nightclub shoot-outs are a devilish dream, capturing at once the brilliance of Terminator's Tech Noir horror and the actual punk in cyberpunk. I just wish there was more to the game than a thousand murders on the dancefloor.

If you ask me – and by clicking here, you did - we're living in rough times when it comes to cyberpunk. The genre has always been prone to putting its style above any substance, or even above any semblance of substance, but it's a style I like so I never thought the day would come when I found myself bored of all that moody neon and rain-slick streets.

That day is here though. I'm so tired of futures packed with sad/sexy/cool/but-definitely-sad strip clubs and sexbots, visited and used by men so stoical they might as well not exist. All the beautiful cityscapes and sunglasses-at-night in the world aren't enough to keep my interest when all that seems to remain is glib pandering to an aesthetic amputated from anger, sorrow or meaning.

Altered Carbon and Mute are recent examples, both appearing on Netflix with varying degrees of fanfare. One, a fairly high budget adaptation of a novel, given a full series treatment so that its world-building and characters can really breathe within their sleeves. The other is the much-anticipated sci-fi successor to Duncan Jones' beloved debut, Moon. It's the latter that has received the most vigorous critical kicking, though the backlash against the backlash has no doubt begun, but I couldn't find the willpower to finish either of them. And that's because they both felt like visual fan-fiction, devoted to a cyberpunk ur-text that I'm not even sure exists.

What is a genre? A miserable little pile of tropes. 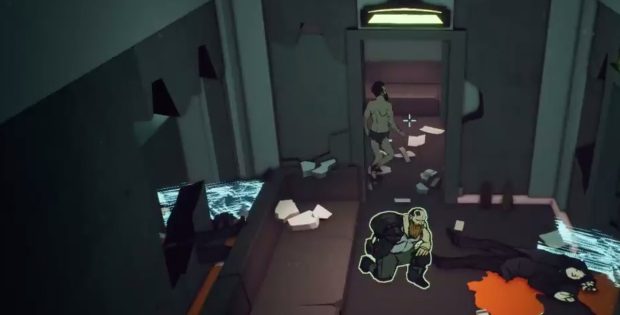 Thankfully, there are bright spots. All Walls Must Fall is one. Made by a team of ex-YAGER developers, is a game about aggression, seduction, persuasion and lies. The story concerns an endless cold war, fuelled by time manipulation that allows agents on both sides to counter one another and rewrite history as it happens. It's a big idea but, sensibly, the game focuses on a few specific moments in a few particular places rather than throwing you at the big picture.

The focus is on the nightlife of Berlin and it's violent, flirtatious, gorgeously soundtracked and dripping with sex and death. Keeping its ideas big and its canvas small is both All Walls Must Fall's smartest decision and its greatest weakness. But before I go into that, here's how it all works.

Each mission tasks you with infiltrating a club and completing a task within that club. The first goal is to enter and that might involve hacking a security camera, to make sure no drones are dispatched to your location, or convincing the bouncer to let you inside. Conversations involve picking from a series of responses to try and raise one positive emotional state to its maximum before a negative trait maxes out instead, ruining everything.

Threatening, flirting, lying and confusing are all possible. I particularly enjoyed pretending to be a superior, dispatched from some imaginary headquarters to deal with anything from a broken ventilation system to a potentially fatal catastrophe. Sometimes a guard will stand up to your lies and you can change tack, making light of the whole situation, but even if you're the sharpest talker in Berlin, you're going to have to resort to violence at some point.

And violence, in the form of turn-based shoot-outs, is more important and more enjoyable than all of the exploring and talking. That's true to the extent that everything else quickly felt like the punctuation around the shoot-outs, which is a little disappointing given how much I want a game about flirting my way through the gay nightclubs of Berlin. This is not that game.

Given how much time you'll spend shooting, it's a good thing that the combat is the most stylish part of a very stylish game. It's where most of the substance lives as well, though that's not clear during the first few exchanges of bullets, which are likely to involve little more than moving behind cover and then shooting to stun, then to kill.

Even in a simple exchange the delights of All Walls Must Fall's musical murdering are obvious. First, you queue up instructions, seeing the results play out in jerky fashion, enemies moving, then player character moving. It's all standard stuff. But when the last enemy is down, provided no reinforcements are incoming (and later on, there will be many reinforcements incoming), you confirm all of your actions. The game says you “drop it”, because it's that kind of game and it's going to convert all of that tactical clicking into a gorgeous real-time cartoon with beats to (literally) die for.

It's what would happen if Baby Driver was on the back-end of a five-day drug binge and decided to pull a heist in the future.

And there's a reason for it, beyond the aesthetic. As you move through the randomised missions that make up a run-through of the game, you'll buy new weapons and temporal manipulation skills. The latter allow you to do all kinds of tricksy things like intentionally triggering some drones, then rewinding their actions but not your own so that you can sort of stealth your way between moments. In later missions – a full campaign is 12 missions, grouped in loosely connected trios – you'll need all the tactical time-twisting you can muster to survive.

Being shot will kill you after a couple of hits but because you're a visitor to this time period, able to skip around from moment to moment and scratch time like a DJ spinning a record, death isn't final unless you've quite literally run out of time. You can always step back from the brink and watch the bullets leave your body as the blood returns.

Time is your key resource and you receive more as you explore, which gives a reason to scope out rooms rather than heading directly to marked objectives. There are also tons of collectibles in the form of groovy posters and delicious cocktails, with all ingredients listed.

And that's pretty much it. Shooting, talking, exploring clubs, collecting things, and moving through a plot that's decent but slightly threadbare.

Given how odd the whole game is, some comparisons might be useful. It mostly reminds me of Invisible, Inc., mostly due to the brevity of the campaigns and replayability. All Walls Must Fall lacks the variety and precision of Klei's masterpiece though and where Invisible, Inc. feels like a much grander game than the component parts might suggest, All Walls Must Fall is narrow. Dense, at times, but narrow.

As I wrote earlier, that's both the source of its greatest strengths and weaknesses. It's an easy game to bleed dry – even though you won't have seen everything on a single playthrough, the second or third are likely to make you feel like you really are caught in a time loop. That would be fine the narrow focus meant the core clubbing and killing experience was everything I hoped it would be, but sometimes objectives don't seem to trigger properly or some gremlin in the machine breaks the flow, and all of that glorious style falls flat like a dapperly dressed drunk trying to shimmy just a little too hard.

The scope is narrow and the execution is imperfect. 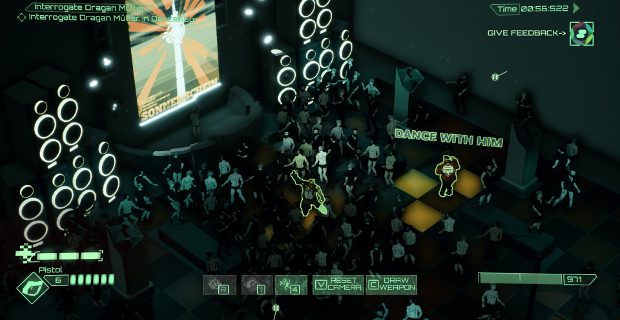 It's still a bloody good time-troubling tactical shooter though, even if I wish it had more space to explore the world, and more variety in the tasks and locations. Think of it as a snapshot though, a malleable freeze-frame that captures one aspect of life in a particularly gleeful cyberpunk dystopia. By framing an entire world through the lens of an never-ending party, All Walls Must Fall creates a sense of claustrophobic, anarchic bliss. A final ecstasy before the flames.

As long as you're aware of the limitations and can endure a few false steps, that's worth the price of entry.