When AMD said they were creating the ultimate 1080p graphics card with their new RX 5600 XT, they really weren't kidding. Not only is it faster than the similarly priced Nvidia GeForce GTX 1660 Ti, but its performance even matches that of Nvidia's slightly more expensive RTX 2060. No wonder, then, that it's gone straight into our best graphics cards list for 2020.

But I'm not here to compare the RX 5600 XT to its Nvidia rivals today. Instead, I want to take a closer look at how it stacks up its other Big Navi rivals, the RX 5700 and RX 5700 XT. As I mentioned in my RX 5600 XT review, this graphics card is so nippy that it actually runs the risk of stepping on the RX 5700's toes a bit - which is great news for those after a powerful 1440p capable graphics card on the cheap, but less good for anyone who's just spent loads on money on an RX 5700. So let's have a gander via some lovely bar charts, shall we?

As with a lot of my graphics card comparison tests, the aim here is to see how well each card performs at a variety of resolutions and graphics settings. In this case, we'll be focusing on how they run at 1920x1080 and 2560x1440, on Ultra and High graphics settings.

To test each card, I paired them with my Intel Core i5-8600K CPU and 16GB of Corsair Vengeance 2133MHz RAM and put them through my general benchmarking suite, taking an average frame rate from either their own built-in benchmarking tools or from my own repeated manual gameplay tests. The games include Shadow of the Tomb Raider, Total War: Three Kingdoms, Final Fantasy XV, Metro Exodus, The Witcher III, Assassin’s Creed Odyssey, Monster Hunter: World and Forza Horizon 4.

As for the individual cards, I've taken the results from my Sapphire Radeon RX 5600 XT Pulse benchmarks, which was the card I used in my RX 5600 XT review, and the results from AMD's Radeon RX 5700 and RX 5700 XT reference cards, which I also used in my RX 5700 and RX 5700 XT reviews. All three GPUs are at the cheaper end of their respective card categories, so it should be a pretty fair comparison across the board. Faster variants of each card may score slightly higher than what I've detailed below, but in terms of an overall baseline experience, this should be broadly representative of how they all stack up. To the bar charts!

As you can see from the graph below, all three RX 5000 cards are more than capable of hitting a smooth 60fps on Ultra settings at 1920x1080. Unless you've got a high refresh rate monitor at your disposal, however, then the RX 5700 and RX 5700 XT aren't going to feel any faster than their cheaper RX 5600 XT sibling. 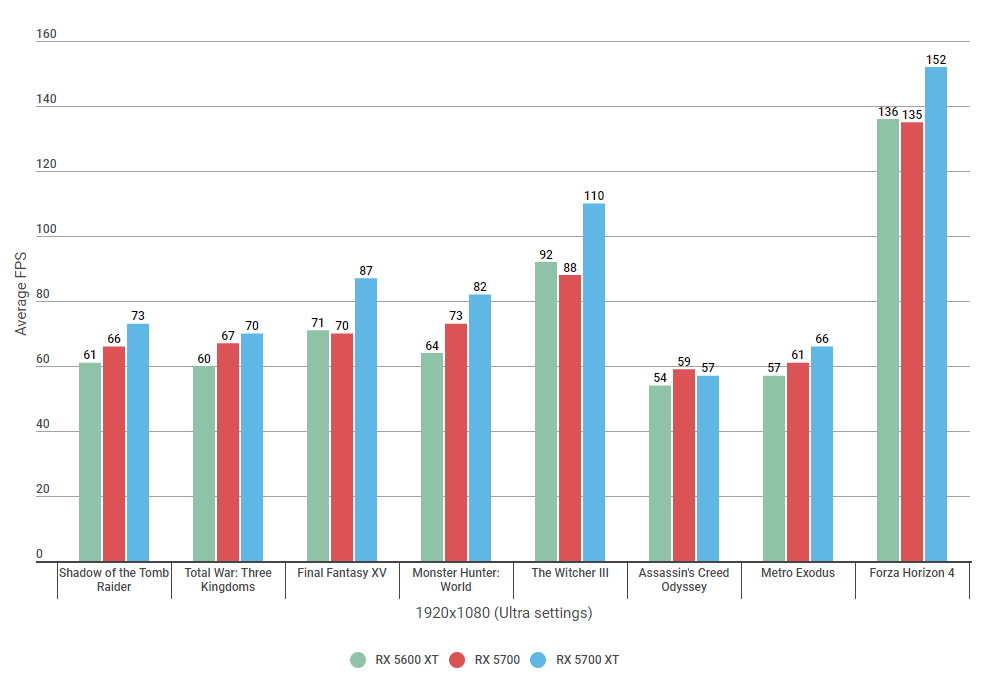 Even if you do have a high refresh rate monitor, though, I'm not sure you'll really be able to tell the difference between the RX 5600 XT and its £50 / $50 more expensive big brother, the RX 5700. While the RX 5700 does inch ahead of the RX 5600 XT in a lot of today's big games, we're often only looking at a handful of frames in each case. Some of you might be able to see the difference without the aid of a frame rate counter, but for me, it all felt much the same. I don't think my eyes are sharp enough to know that the RX 5700 was actually running 5fps faster in Shadow of the Tomb Raider, for example, nor am I able to distinguish between 57fps and 61fps in Metro Exodus.

Indeed, there are even a couple of cases where the RX 5600 XT's average frame rate comes out in front of the RX 5700, such as in Final Fantasy XV, The Witcher III and Forza Horizon 4. In fact, the only game where the RX 5700 really makes its extra power felt is in Monster Hunter: World, where it's a good 10fps in front of its RX 5600 XT sibling. Everywhere else, the RX 5600 XT delivers a more or less identical experience for a lot less money.

The RX 5700 XT, meanwhile, is a more obvious step-up in almost every respect. Apart from a couple of outlier cases with games such as Assassin's Creed Odyssey and, to some extent, Metro Exodus, the RX 5700 XT continues to justify its higher price in my eyes, offering a tangible performance boost for those with high refresh rate monitors.

In truth, though, neither the RX 5700 or RX 5700 XT are intended to be used as just 1080p graphics cards. Instead, their forte lies in playing games at 2560x1440, and it's here where things start to get interesting. Starting at the Ultra end of the spectrum, the RX 5600 XT continues to put in a surprisingly good performance compared to its RX 5700 siblings. 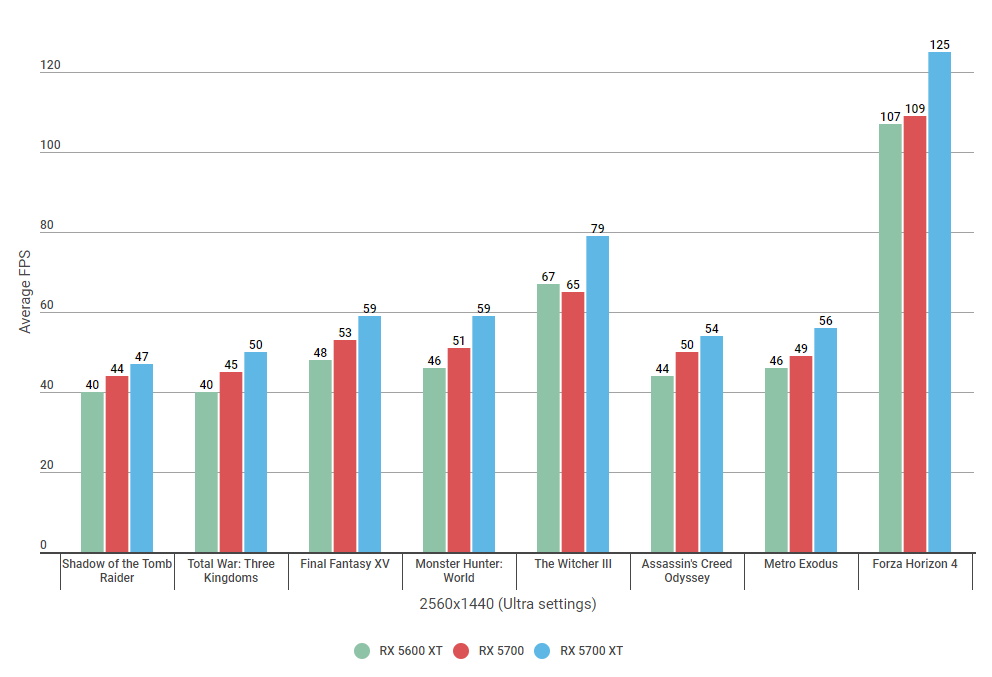 It might not be capable of hitting a consistent 60fps on this quality setting (except in older games such as The Witcher III and very well optimised games like Forza Horizon 4), it's still only an average of around 5fps slower than the RX 5700. Admittedly, the RX 5700 probably just about holds its own here, as the jump from 40fps to 45fps, or 45-50fps, is much more obvious the eye than it is once you start pushing past 60fps. Is that worth paying an extra £50 / $50 for, though? I'd wager not, especially when knocking down the settings to High will get you much smoother performance all round.

Indeed, as our High results below show, the gap between the RX 5600 XT and RX 5700 becomes even tighter here, making the latter even more redundant than it was before. If you're wondering whey there aren't as many games here, that's because I've excluded the ones that were already pushing 60fps on Ultra for this graph. I've also left Shadow of the Tomb Raider off as well, because you only need to knock that game's anti-aliasing down to SMAATx2 on its top Highest setting to get at least 60fps from all three cards. Therefore, you don't need to drop down to High to get that kind of frame rate. 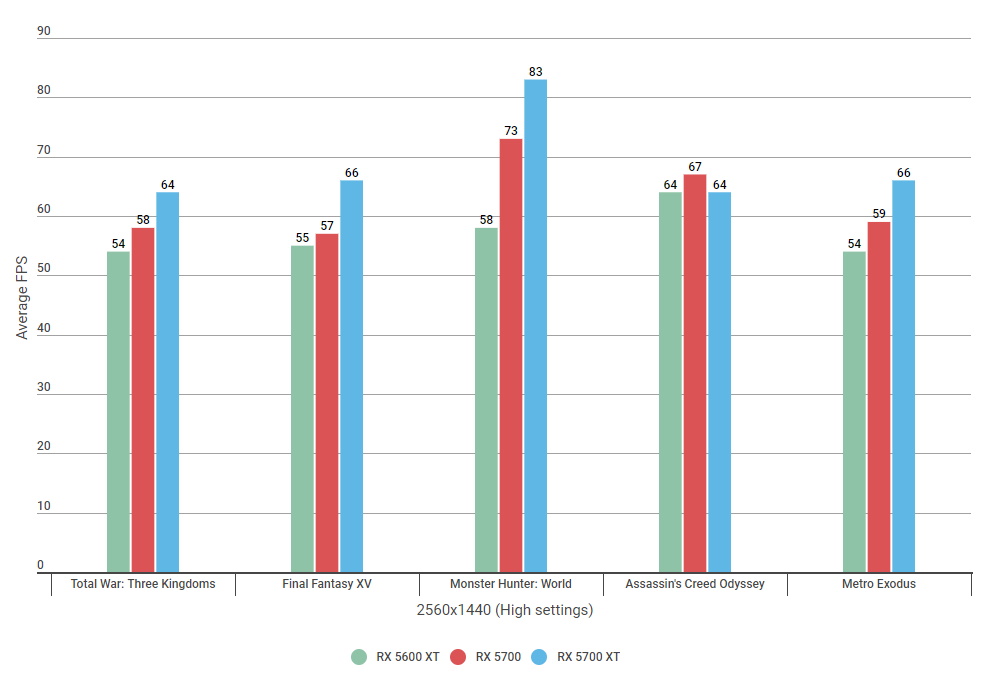 For these remaining games, then, it's a very similar picture to what we saw above with our 1080p benchmarks. Apart from another stonking performance in Monster Hunter: World (albeit one you won't even see without a high refresh rate monitor), the RX 5700 is effectively giving you exactly the same level of performance as the cheaper RX 5600 XT, putting it in an even more precarious position than it was on Ultra.

Even the RX 5700 XT is in a bit of danger here, to be honest, as those with regular 60Hz monitors won't get any extra benefit. Instead, this card is once again going to feel just as fast as the RX 5600 XT. As a result, if you're not that bothered about playing games on the highest graphics settings at this resolution, then you'd do just as well saving yourself a wodge of cash and opting for the RX 5600 XT. However, if you're an 'Ultra or bust' kind of person, then I think it's still worth considering, if only because it's got that extra headroom to consistent hit 60fps (or damn well near it) on that top quality setting.

With the arrival of the RX 5600 XT, then, I think it's fairly safe to say that the RX 5700 has probably had its day. Or at least the single blower fan models of the RX 5700 have, as I've yet to give one of the newer dual/triple fan versions of the RX 5700 a proper run through my benchmarking suite. I'll be doing that very soon, however, so watch this space for an update.

In the meantime, though, I think the RX 5600 XT rightly earns its double spot on our best graphics card list, firstly as the best 1080p graphics card you can buy right now, and secondly as the card you should buy for playing games at 1440p without breaking the bank.

That said, there are a number of other things to consider here apart from each one's raw performance. Firstly, AMD have said they're going to be refreshing their Navi line-up at some point this year, and with the RX 5700 and RX 5700 XT being the oldest Navi cards they have at the moment, they're probably going to be first in line to get newer, faster, Super XT/whatever-the-hell-they're-going-to-be-called versions. We don't know when that's going to happen at the moment, though, so if you're in need of a new graphics card right now, then I think you'll be perfectly pleased with what the RX 5600 XT has to offer.

However, another thing that's worth pointing out is the fact that the RX 5600 XT doesn't come with any free games at the moment, whereas the RX 5700 does - two of them, in fact, as well as three months of Xbox Game Pass for PC as part of AMD's latest Raise the Game bundle.

I'm still not sure why AMD have chosen to exclude the RX 5600 XT from its current bundle deal, but if you've been thinking about buying the upcoming Resident Evil 3 remake or Monster Hunter: World's Iceborne Master Edition (which comes with the base game and its new Iceborne expansion), then you might, in fact, be better off choosing the RX 5700 instead. Some of that extra value will be naturally negated by the fact you're paying more for the card in the first place, but overall you're probably still getting more for your money than you are with the RX 5600 XT. Of course, if you're one of the hundreds and thousands who already own Monster Hunter: World, then you might as well opt for the RX 5600 XT and just buy Resi 3 when it comes out.

Ultimately, then, it's not quite as clear cut as the numbers might imply. The RX 5700 is just about hanging in there by the skin of its good value teeth, but to be honest, it's pretty borderline. It might become a more viable option once AMD's refresh takes place, but until then, you should almost definitely-maybe go for the RX 5600 XT instead. Probably.