It's been a bit of a whirlwind week leading up today's launch of AMD's Radeon RX 5600 XT. Dubbed the "ultimate" bestest best graphics card for 1080p gaming, the RX 5600 XT was originally meant to be AMD's answer to Nvidia's GeForce GTX 1660 Ti, coming in at an identical price of $279. Nvidia, however, fought back, lowering the price of their next card up, the ray-tracing enabled RTX 2060, to £275 / $299 at the end of last week. Cue another scramble over the weekend where reports were flying around that loads of RX 5600 XT manufacturers were now raising the clock speed of their new Big Navi cards to make them more competitive with Nvidia's RTX 2060. Amazing what having a bit of competition can do, eh?

The result is, well, a card that's pretty much neck and neck with Nvidia's RTX 2060, but doesn't have any ray tracing support. I'll get into the nitty gritty of what that means later on, but effectively, the RX 5600 XT does indeed live up to its name as AMD's ultimate 1080p graphics card, offering significantly faster speeds than either of their entry-level RX 5500 XT cards at this resolution, and even runs the risk of stepping on the toes of their lower-end (but still very good) 1440p oriented graphics card, the RX 5700. The GTX 1660 Ti doesn't even come close to it.

To test the RX 5600 XT, I've been taking a look at Sapphire's Radeon RX 5600 XT Pulse card. At £255 (US pricing TBC), this is set to be one of the cheaper RX 5600 XTs available when they go on sale later today, so it should give us a good indication of what this card is capable of across the board. Armed with 6GB of GDDR6 memory, this dual fan model is a bit of a beast size-wise, but it wasn't overly loud or noisy during my testing. 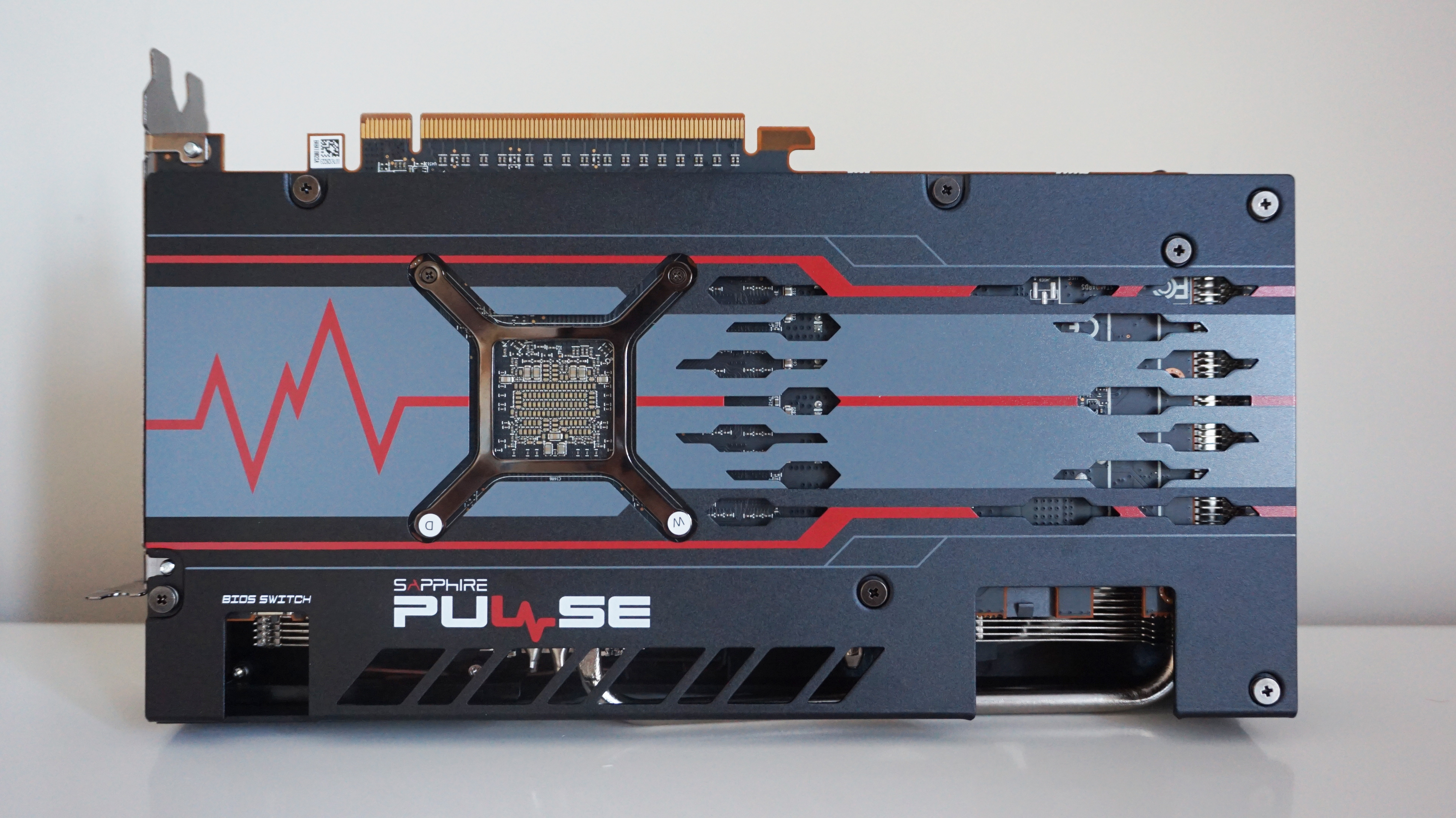 Just like its RTX 2060 rival, the RX 5600 XT is more than capable of hitting 60fps on the highest quality settings at 1920x1080, and is probably overkill for anyone with a regular 60Hz monitor at this resolution. Really, you'll want to have a screen with a refresh rate of at least 75Hz to make the most of the RX 5600 XT, as this card's frame rate regularly pushed into the 70s and 80s during testing.

In Shadow of the Tomb Raider, for example, I saw an average of 61fps on Highest with the game's demanding SMAAx4 anti-aliasing enabled, and an average of 89fps when I dropped the AA down to its SMAATx2 setting. In each case, that's a handful of frames behind Nvidia's RTX 2060 - an average of just 4fps - but not anything you'll notice in practice without the aid of a frame rate counter.

Over in Metro Exodus, meanwhile, it was the other way around, with the RX 5600 XT managing an average of 57fps on Ultra versus the RTX 2060's 52fps average. Just like before, I think you'd be hard-pushed to notice much difference here without that all-important frame rate counter, as both cards stuttered down to 30fps in the game's tough internal benchmarking tool. 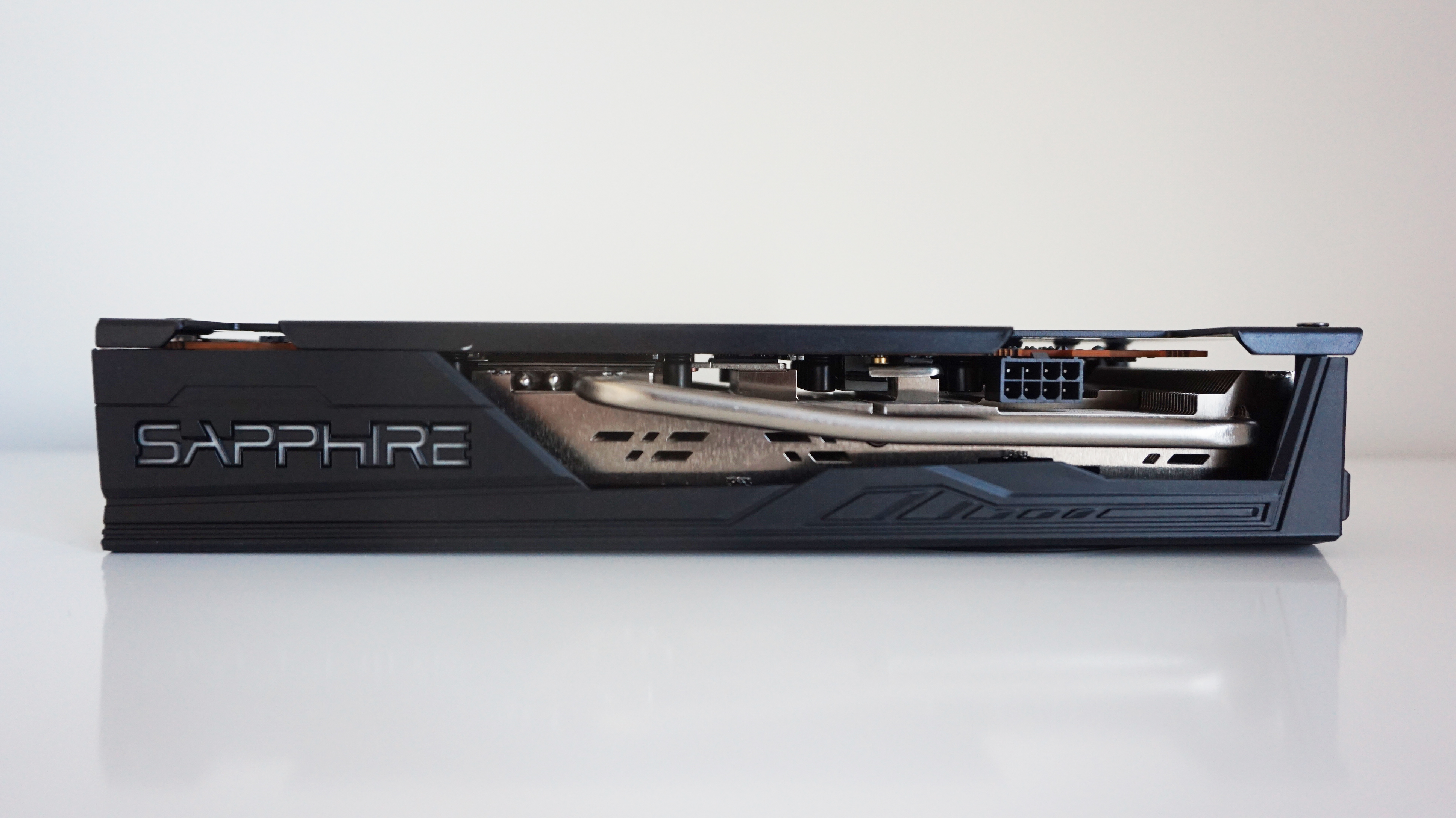 It was a similar scenario in Final Fantasy XV as well. Here, the RX 5600 XT came out in front with an average frame rate of 71fps on Highest versus Nvidia's 65fps, but overall both cards felt pretty much identical in speed. That said, I was surprised by how well the RX 5600 XT performed here, as AMD cards often don't cope very well with FFXV. I was particularly impressed with how it managed to reach a high of 82fps when I was trudging up and down the hills of Duscae, too, putting it 14fps ahead of the highest frame rate I saw on my RTX 2060. Naturally, the RTX 2060 is better placed to take advantage of FFXV's extra Nvidia effects, such as TurfEffects and HairWorks, but the RX 5600 XT still puts in a damn good showing nonetheless.

That's four games where AMD comes out on top, and four games for Nvidia. In the majority of cases, though, I wouldn't say either card puts in a particularly convincing lead over the other, as most of their average 1080p scores were all within around 5fps of each other. Forza Horizon 4 and The Witcher III do swing it more heavily in AMD's favour, but even then you'll only be able to see the difference if you have a monitor with a high refresh rate. To all intents and purposes, then, we're talking pretty much identical performance across the board at this resolution. 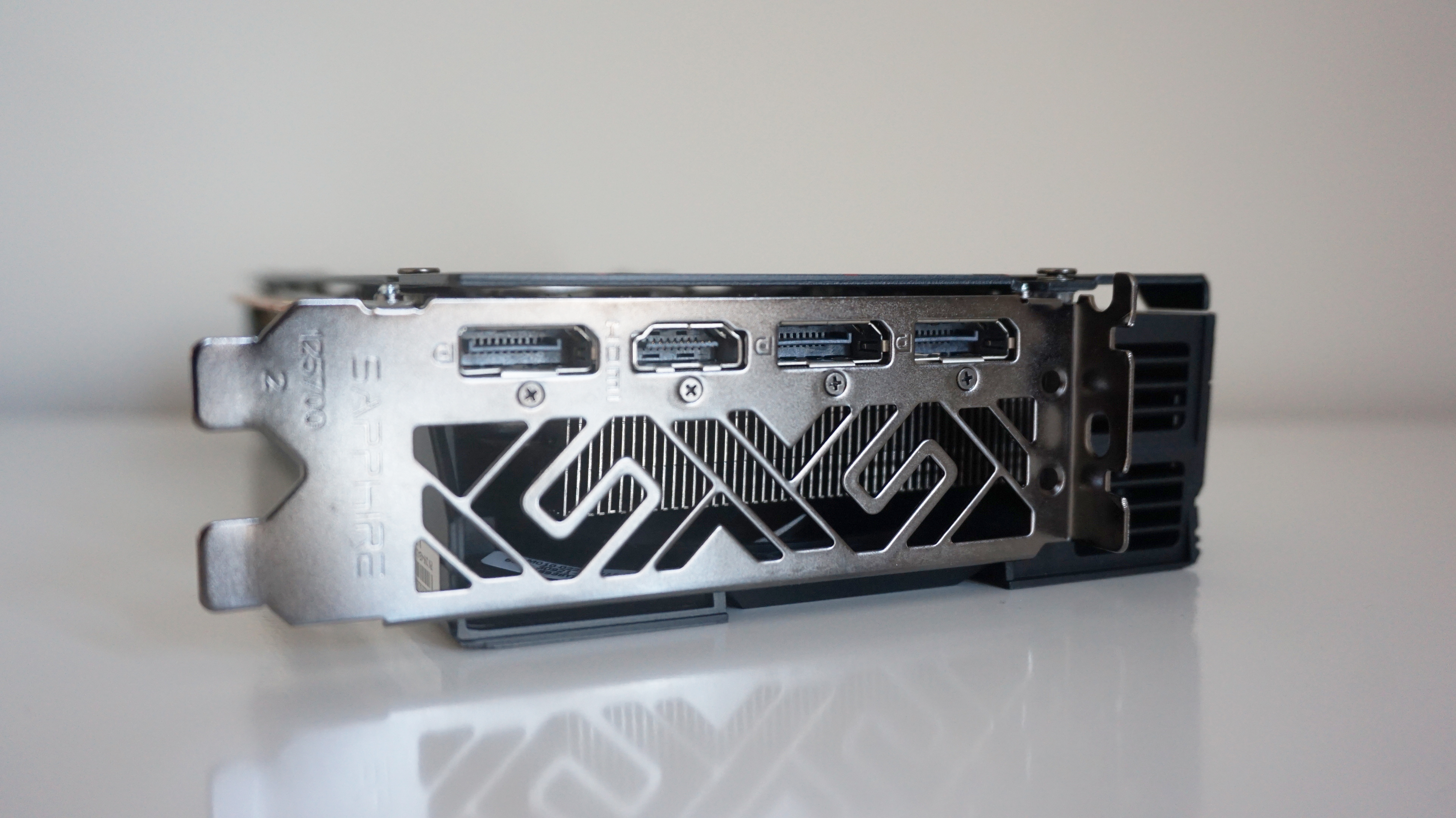 The RX 5600 XT is also a very competent card for playing games at 2560x1440, too. Once again, the average frame rates you can expect to see are pretty much toe to toe with the RTX 2060 at this resolution, making for another extremely tight set of benchmarking results. Like its Nvidia rival, it's not quite a "60fps on max settings" kind of card at this resolution, but there's more than enough power here to hit that kind of speed on High, making this a great 1440p card for anyone looking to save a bit of money.

If anything, the RX 5600 XT actually puts AMD's own Radeon RX 5700 card in a bit of an awkward position here, as there were many instances where the RX 5600 XT was only an average of 5fps behind its £300 / $330 RX 5700 sibling. AMD have assured me the RX 5600 XT will not be replacing the RX 5700, but it may as well be given the proximity of their overall performance figures. Watch out for some graphs together later in the week to see what I mean.

Total War: Three Kingdoms saw the RTX 2060 take a slight lead, averaging 58fps on High compared with the RX 5600 XT's 54fps, but Metro Exodus saw it swing the other way again, with the RX 5600 XT averaging a noticeably smoother 54fps on High versus the RTX 2060's 48fps. The RX 5600 XT maintained its lead in The Witcher III and Forza Horizon 4 as well. In the former, it managed an average of 67fps on Ultra, putting it 7fps ahead of its Nvidia rival, while the latter saw it leap ahead by almost 30fps, averaging 107fps on Ultra compared with the RTX 2060's 80fps average. 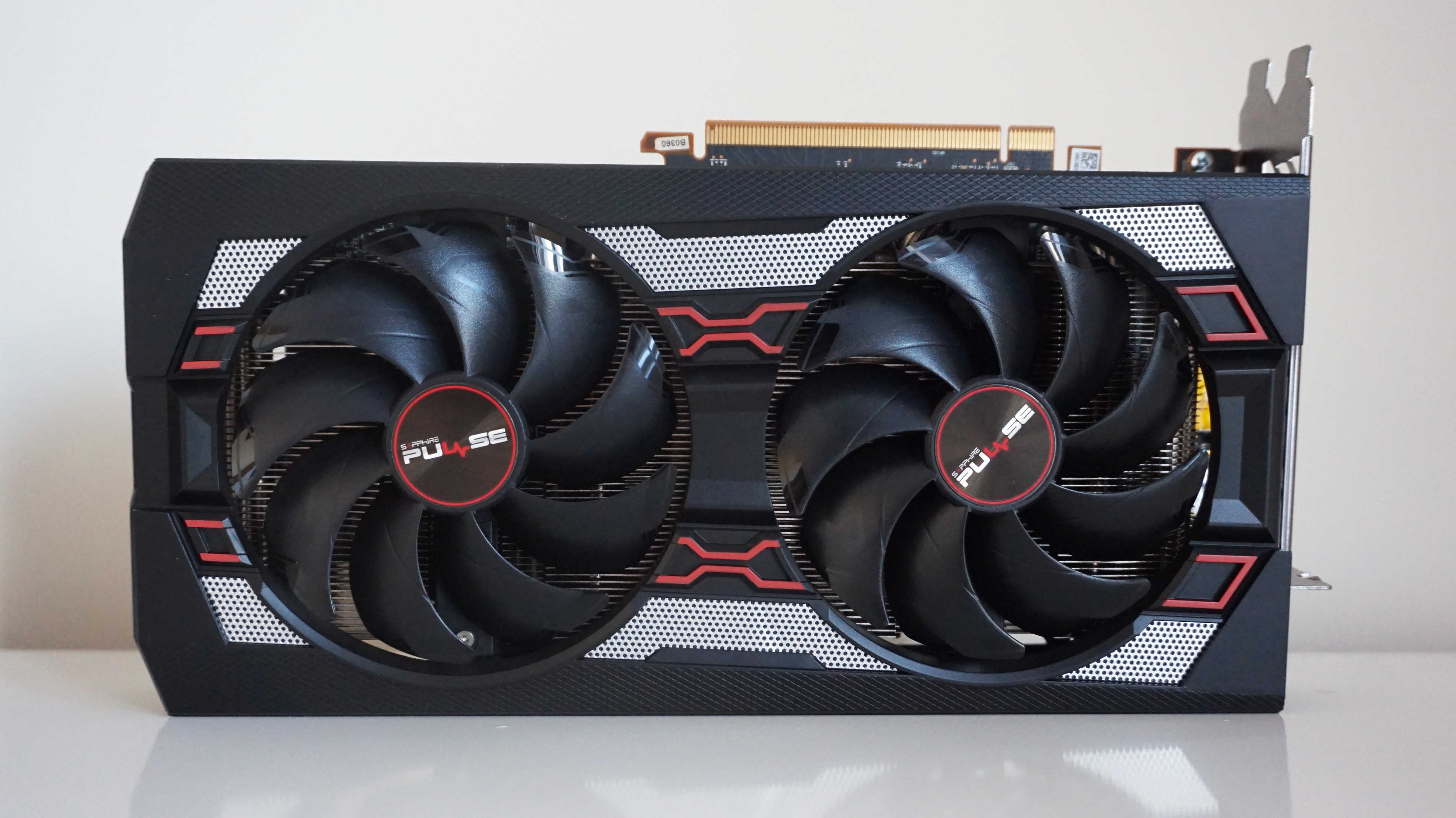 On balance, then, you could argue the RX 5600 XT has the edge on the RTX 2060, especially when the £255 Sapphire model I've got here goes for £20 less than the cheapest RTX 2060 I can find right now, which is Zotac's Twin Fan model. The RX 5600 XT also comes with three months worth of Xbox Game Pass for PC, too, although when you can still sign up for Microsoft's three months for £1 offer, that's not really adding that much extra value to it. Sadly, neither card currently come with a free game bundle, which is a shame given you can get a free copy of Monster Hunter World's Iceborne Master edition with the RX 5500 XT.

The question really becomes, then, whether you're desperate for the RTX 2060's extra ray tracing support. Personally, I could take or leave ray tracing at the moment. While more ray tracing games are due to hit later this year, the number of games that support it right now is still pretty small, and none of them except Control's RTX features have really wowed me with what it can do. If Cyberpunk 2077 was still releasing in April, there may be cause to err on the side of ray tracing, but now that's been pushed back to September (and there's no guarantee it will have ray tracing at launch, either *cough*Wolfenstein-Youngblood's-six-month-delay*cough*), the only big ray tracing games on the immediate horizon are Watch Dogs Legion and Doom Eternal, the latter of which has had next to nothing shown off about what its ray tracing support will actually entail.

There'll also be Vampire: The Masquerade - Bloodlines 2 and Dying light 2 at some point this year, but I can't say that any of their respective ray tracing demos have left me particularly impressed so far. Indeed, Minecraft is the only ray tracing game coming up that's left any kind of impact on me so far, but even that's limited to the Windows 10 version of the game, and, as I mentioned in my Minecraft RTX preview, I've also got serious concerns about how well it's actually run on lower-end RTX cards when it finally comes out.

Plus, there's still the age-old question of "will these games actually get ray tracing at launch?" to consider as well. With several of the games I've just mentioned pushed back toward the latter half of the year, if any of them suffer another six-month delay to their ray tracing like Wolfenstein: Youngblood did, then it could be this time next year, if not later, before you can do anything with it. 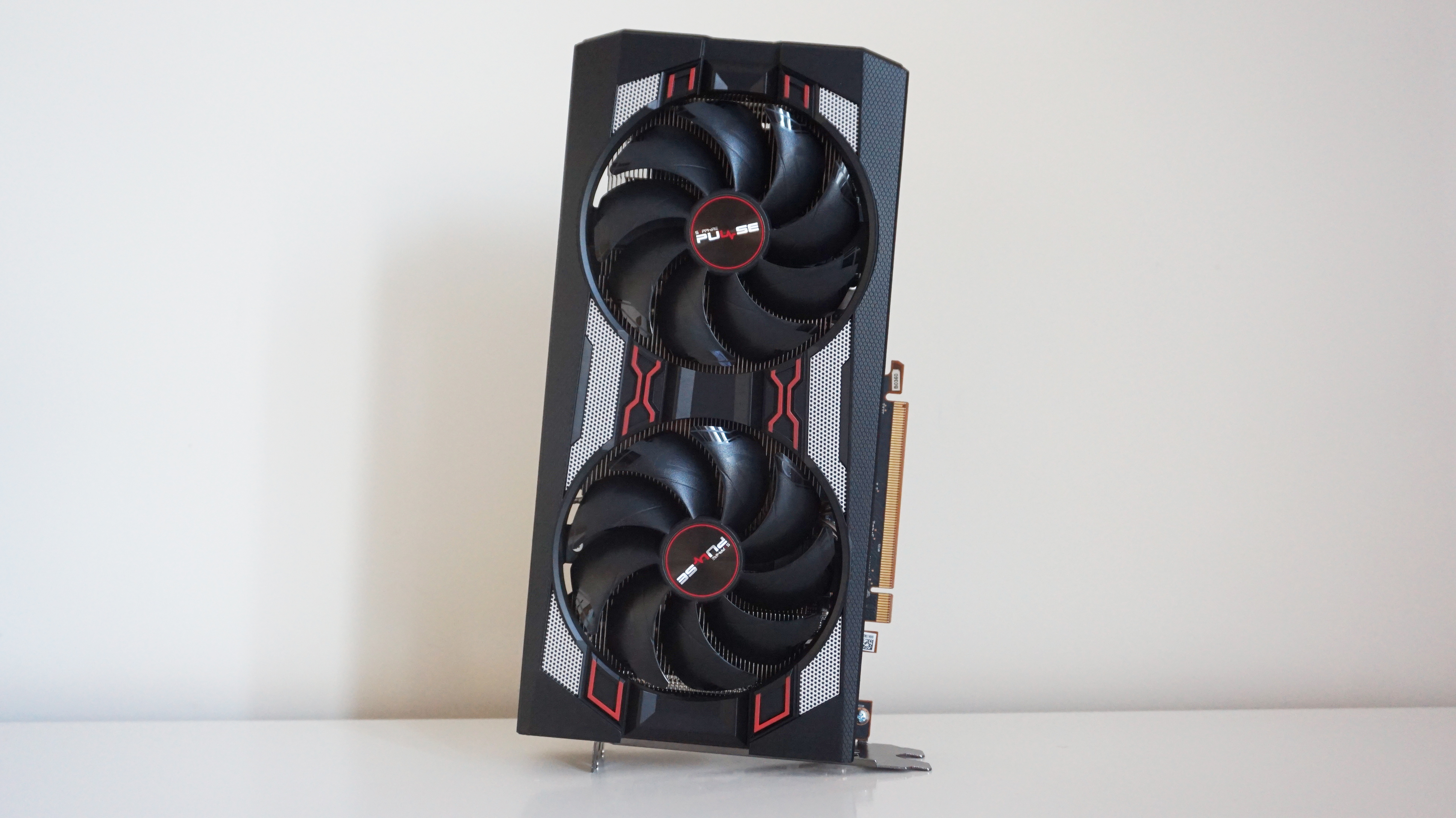 As a result, I reckon it will be at least another year, if not two, before we really start seeing ray tracing come into its own, if only because more devs will be making games for the next-gen console boxes by then, which also support ray tracing. At which point, there will almost certainly be newer, faster, more powerful graphics cards out there that can do ray tracing properly - and (hopefully) without taking as much of a performance hit. On balance, I'd be inclined to say, "Worry about ray tracing when you next come to upgrade your graphics card, because there sure ain't many compelling reasons to get one right this second."

You may disagree, of course, and that's fine. No one's stopping you from jumping in with Nvidia. But when it comes to raw performance, I think AMD's Radeon RX 5600 XT puts in a damn good showing for just over £250, and is well worth considering as an alternative to the RTX 2060, especially given its marginally lower price. One thing's for sure, though - the RX 5600 XT is definitely worth buying over the GTX 1660 Ti, which can still be found floating around the £250 / $280 mark, and I'd even go as far as saying you should probably get this instead of AMD's Radeon RX 5700 if you're looking for something that can offer a good 1440p experience as well. The RX 5700 does offer marginally better speeds at 1440p, but as I mentioned above, I don't really think it's enough to justify spending another £50 / $50 on it.

That said, I also don't think you need to spend £250 to get a decent 1080p graphics card. If all you're after is something cheap and cheerful and aren't too fussed about playing games on the highest settings, then the 4GB version of AMD's Radeon RX 5500 XT card is still my number one recommendation for what you should buy at this resolution. After all, this will still get you at least 60fps on Medium settings in most of today's big games, and somewhere in the mid-50s when you move up to High. That's more than enough for most people, and will only set you back £170 / $180 to boot.

However, tor those after a card that can pull double resolution duties, offering a super fast 1080p experience as well as impressive 1440p speeds, then the RX 5600 XT is a tough act to beat.