Should you ever spend $500 on a gaming CPU? Personally, I think you'd be mad to spend that kind of money on a processor, especially when Intel's Core i7-9700K offers such incredible gaming performance for about two thirds of the cost. If you are one of these so-called power users with $500-odd to spare on getting the absolute bestest best gaming CPU money can buy, however, then your choices have literally just doubled with the introduction of AMD's new Ryzen 9 3900X.

Priced at $499, AMD are positioning this chip as their Intel Core i9-9900K killer, which at time of writing is just a bit cheaper at £485 / $490. The Ryzen 9 3900X, however, is quite a bit beefier in the old specs department - and comes with a decent cooler bundled in the box, which its Intel rival does not. Packing 12 cores and 24 threads as opposed to Intel's rather piddly-sounding 8-core-16-thread offering, the Ryzen 9 3900X is an absolute speed machine when it comes to general desktop performance. Its gaming prowess, however? That's a whole other story.

Unfortunately, it's not a story that has a particularly happy ending for AMD. Again, I should stress that, much like my other gaming CPU reviews, my main priority here is finding the best gaming CPU for gaming, and gaming alone. I'm not really fussed about how fast it can render animation programs or tear through creative applications. That's not what I use my PC for. Instead, I want to know which CPU is best tuned to give me the fastest speeds while playing games - and in that respect, having 12 cores and 24 threads at my disposal makes absolutely naff all difference.

Before we dive into my test results, though, a brief word about CPU gaming benchmarks. As I explained over in my AMD Ryzen 7 3700X review, getting an accurate picture of a CPU's gaming chops is still pretty difficult. As our friends at Digital Foundry have explained in the past, a lot of PC benchmarks either don't test your CPU properly, or simply aren't very accurate in the first place. Fortunately, a handful of gaming benchmarks have got a lot better at this recently, with the likes of Shadow of the Tomb Raider, Forza Horizon 4, Assassin’s Creed Odyssey and more all providing an in-depth look at your CPU's performance as well as what your graphics card's doing. 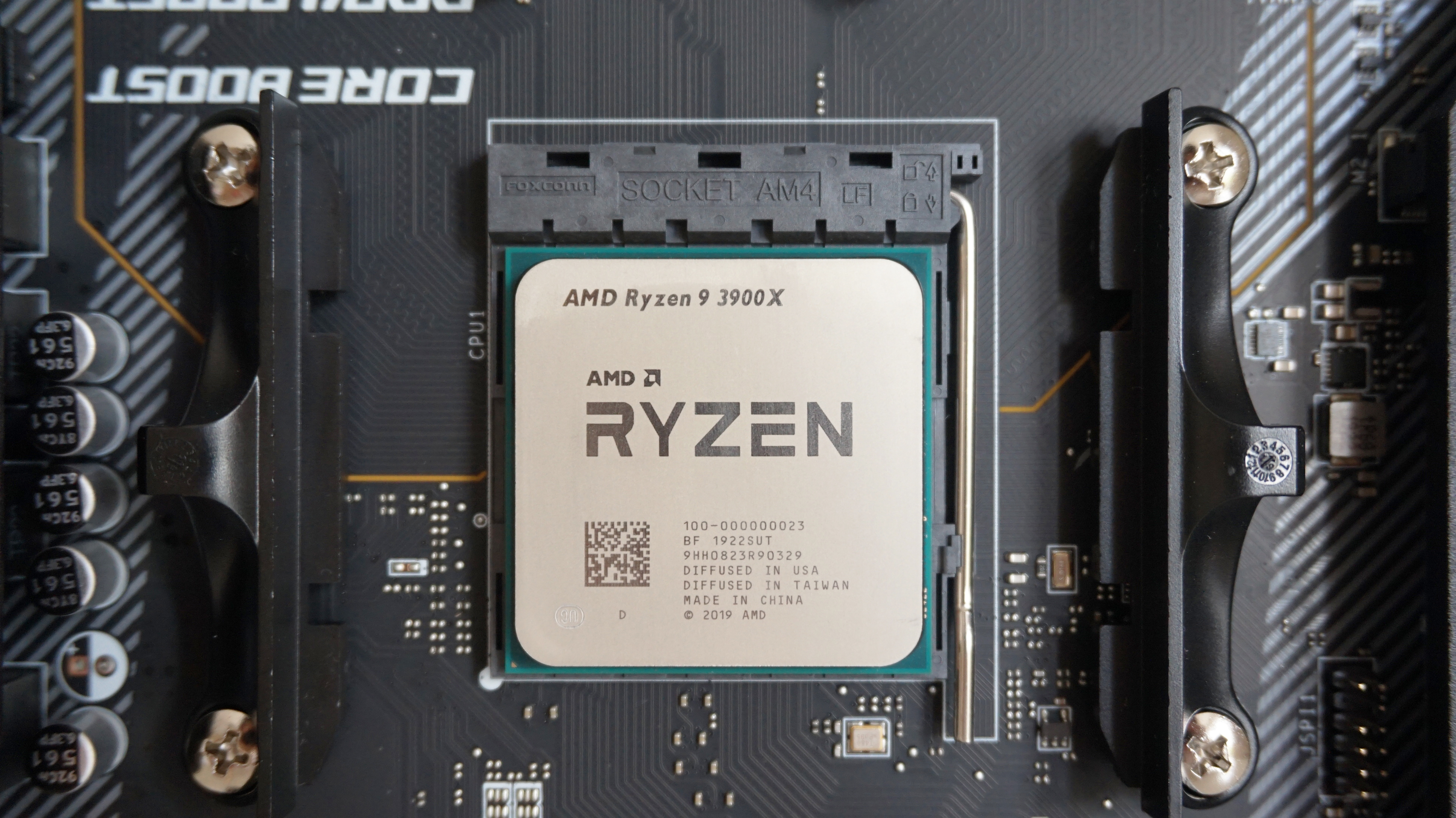 Now I know my 16GB of Corsair Vengeance LED RAM isn't the fastest stuff in the world, but it is the same stuff I used to test the Core i9-9900K with. I also kept the same graphics card and power supply, and used the Ryzen's bundled AMD Wraith Prism cooler to give me the best like-for-like comparison scores against the BeQuiet BK009 Pure Rock tower cooler I've been using for all of my Intel CPU testing.

And as you can see from the results below, the Core i9-9900K still comes out on top - and by quite a significant margin at 1080p, too. With the exception of the ever-uniform Assassin's Creed Odyssey, the Core i9-9900K managed at least another 8fps in Total War and Forza Horizon 4, and another 15fps in Shadow of the Tomb Raider. It was a much closer race at 1440p, all told, but the Core i9-9900K still managed to beat the Ryzen 9 3900X in every game going. 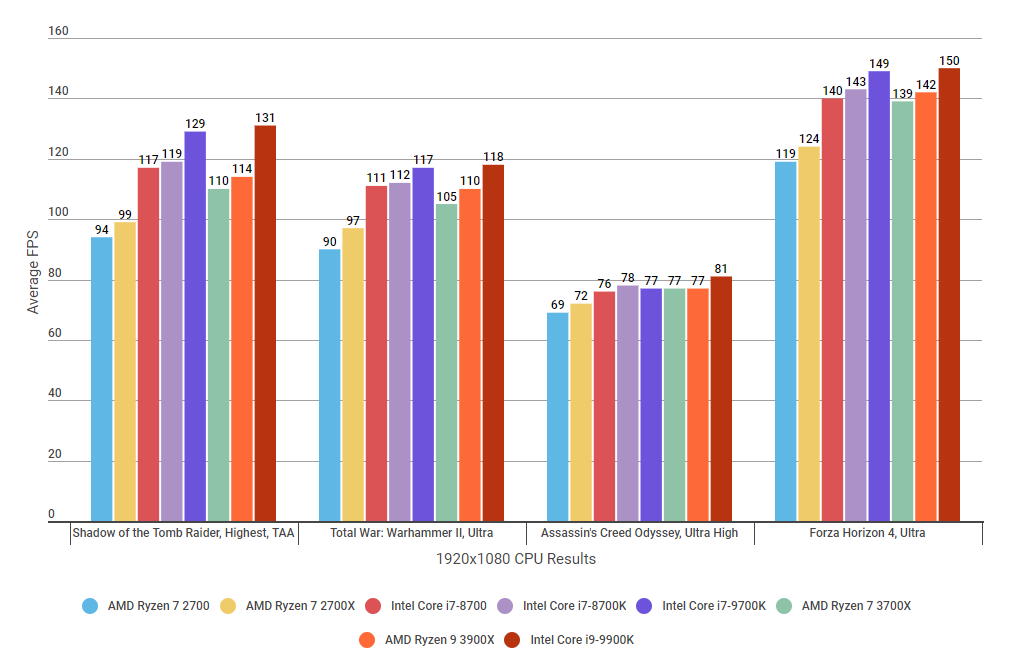 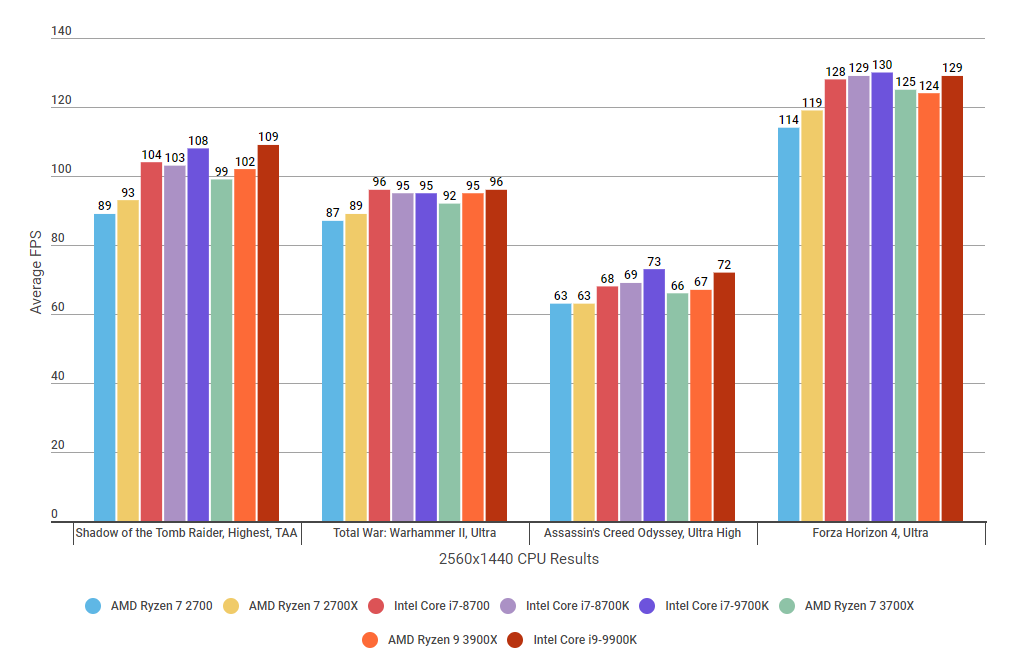 As I said in my Ryzen 7 3700X review, though - when we're dealing with 100fps+ speeds in the first place, what's another 5-10fps here and there anyway? Is it something you're actually going to be able to see and appreciate without the aid of a frame rate counter? Probably not.

I should also note that I was, in fact, able to match those Core i9-9900K scores once I re-tested the Ryzen 9 3900X with the 16GB of G.Skill Trident Royal Z RAM that came with my Ryzen testing pack. Indeed, once I'd stuck that in my PC and applied its XMP profile to run at its top speed of 3600MHz, the Ryzen 9 3900X shot up to identical average frame rates in Shadow of the Tomb Raider and Assassin's Creed Odyssey, and even surpassed the Core i9-9900K in Total War, averaging 124fps at 1080p and 97fps at 1440p. Forza Horizon 4, meanwhile, remained at 142fps and 124fps, showing no benefit whatsoever.

However, as I also noted in my Ryzen 7 3700X review, faster RAM means a higher overall cost. Those G.Skill Trident sticks cost £214 / $190 at time of writing, which is almost 100 quid more than my £120 Corsair sticks. Admittedly, my particular Corsair model doesn't seem to be on sale any more in the US, which makes it a bit difficult to do an accurate price comparison. For those buying in the UK, though, once you factor in another £100-odd for your RAM, you're probably paying as much as (if not more than) you would for a cooler to go with the i9-9900K, putting you back at square one.

Viewed in this light, then, the only reaction I can really muster for the Ryzen 9 3900X's stonking multicore performance in the Cinebench benchmark is a kind of bemused shoulder shrug. Yes, it's absolutely massive (see below), and yes, it will probably be a fair old while before we see Intel come up with something even remotely as quick in their mainstream Core line-up (I mean, it took until Core i9-9900K before we had an Intel CPU that could beat AMD's Ryzen 7 2700X, so it will probably be at least another year before Intel come up with something even faster, if not longer). 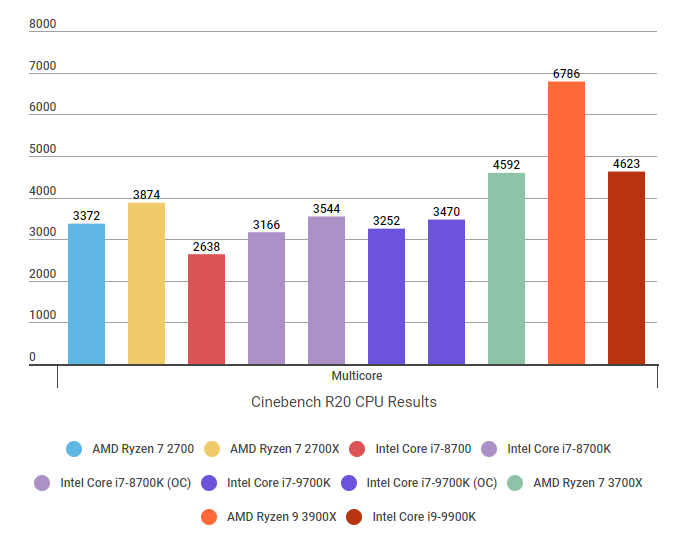 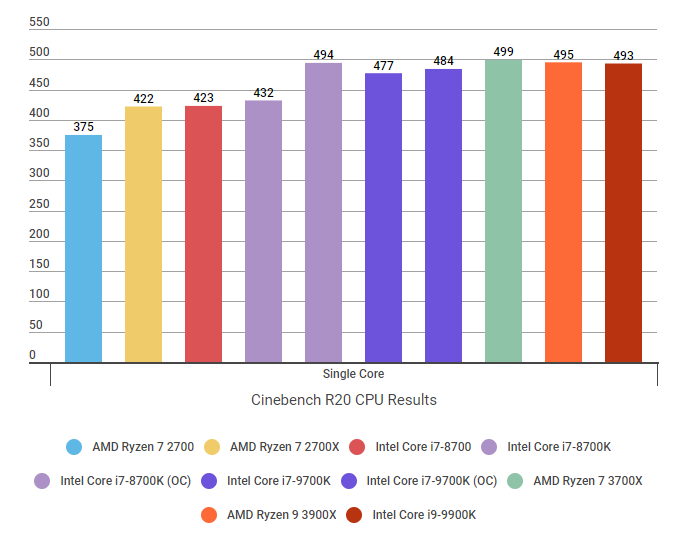 Does it help the Ryzen 9 3900X's gaming performance, though? Not really. I mean, just look at how close it is to its 8-core-16-thread cousin, the Ryzen 7 3700X. By all means knock yourself out with the 3900X if you're an elite video editor, professional animator or some other top-tier creative person, but for me, the amount of money you're spending on both this and the Core i9-9900K really isn't reflected in the amount of extra performance you're getting over their Core i7 / Ryzen 7 relatives.

Admittedly, you'll almost certainly get better results from both CPUs by applying better cooling solutions - but when both of them cost around $500, then the Core i9-9900K will almost certainly still come out on top for gaming. Really, though, you probably shouldn't buy either CPU, as I'm just not convinced any one actually needs them. Instead, I'd stick with the Core i7-9700K if you want the absolute bestest best gaming CPU speeds, or opt for the Ryzen 7 3700X if you don't want the faff of finding a good cooler. You'll be much happier, and your wallet will thank you for it later, too.