Intel's Core i7 processors may not be the absolute cream of the crop any more thanks to the introduction of their new 9th Gen Coffee Lake Core i9 range of gaming CPUs, but I'll be damned if the Core i7-9700K still isn't one of the best gaming CPUs you can buy today. For starters, it costs a heck of a lot less than Intel's top dog Core i9-9900K, with prices starting at £360 / $410 at time of writing compared to the whopping £485 / $490 you still have to fork out for the i9. Plus, its gaming performance is pretty darn great, too. Here's wot I think.

One of the biggest things Intel's done for its 9th generation of Coffee Lake Core i7s is increase the core count. Whereas the Core i7-8700K was a six-core / twelve-thread CPU, the Core i7-9700K is an eight-core chip with eight threads to its name. Sure, it's lost Intel's Hyper Threading support (that's now reserved for the eight-core / sixteen-thread Core i9-9900K), but as you'll soon see from the results below, the loss of those four extra threads isn't really that big a deal when it comes to the i7-9700K's overall gaming performance.

Intel have also bumped the i7-9700K's maximum Turbo Boost speed up by another 200MHz, taking its top speed up to 4.9GHz here over its 4.7GHz 8th Gen predecessor. However, you'll almost certainly need a better cooling solution than a standard tower cooler to get the best out of the i7-9700K, as my BeQuiet BK009 Pure Rock cooler couldn't really cut it when I tried overclocking the damn thing. Indeed, it only boosted to around 4.6GHz when I was running Cinebench's multicore test, and any attempts to go higher than 4.7GHz in Intel's Extreme Tuning Utility Software not only showed signs of thermal throttling but was also increasingly unstable.

As such, I'd highly recommend pairing this CPU with a liquid cooler if you're going to go for it, but that's not to say you won't still get a great gaming experience without one. Indeed, take a look at the graphs below and you'll see it offers substantially more performance than the Core i7-8700K, and (at least with my limited cooling options) is just as nippy as the Core i9-9900K. 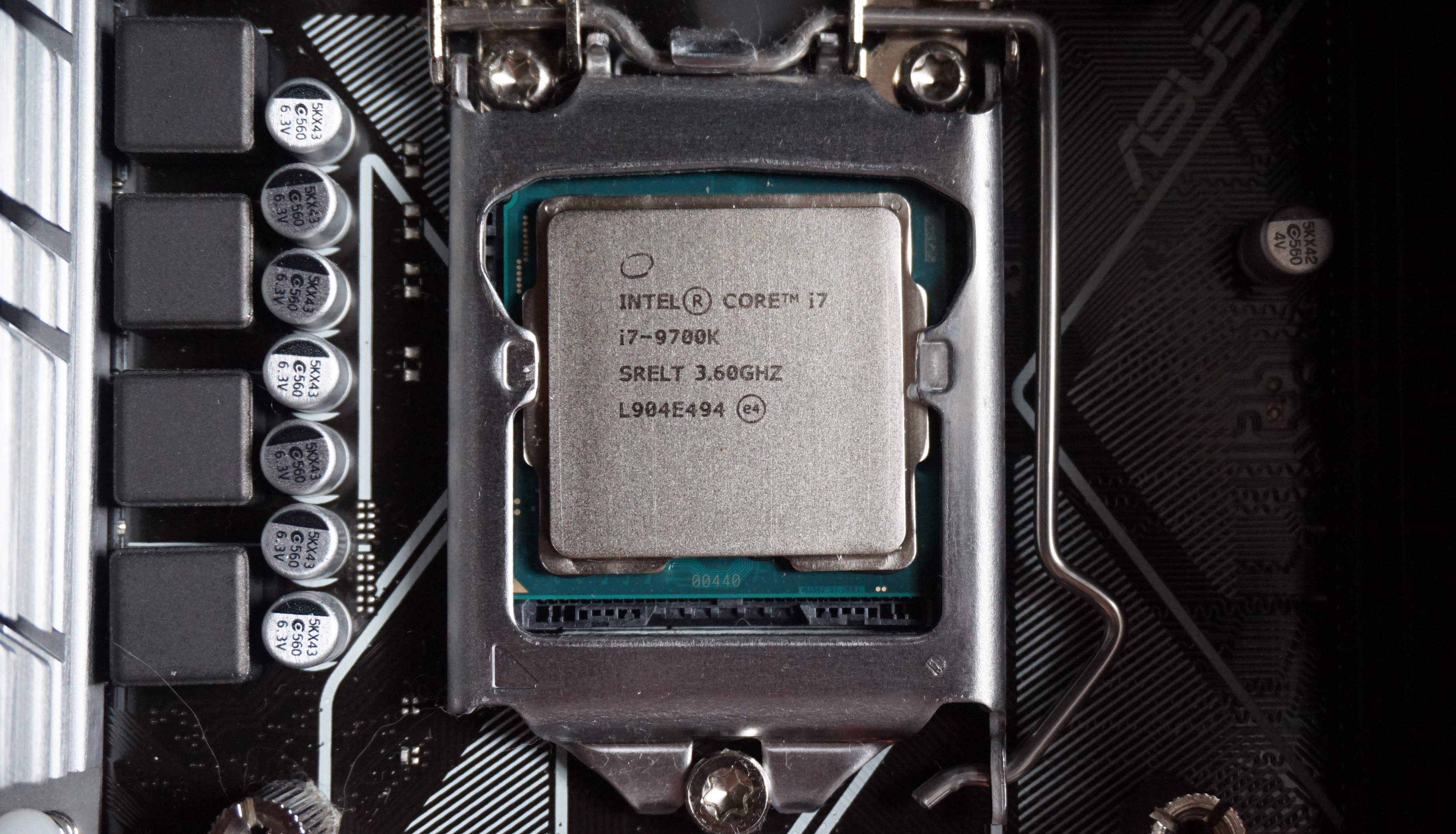 Admittedly, testing any CPU's gaming performance is still a bit of a nebulous exercise. As our friends at Digital Foundry have explained in the past, a lot of benchmarks either don't test your CPU properly, or simply aren't very accurate in the first place. Fortunately, a handful of gaming benchmarks have got a lot better at this recently, with the likes of Shadow of the Tomb Raider, Forza Horizon 4, Assassin's Creed Odyssey and more all providing an in-depth look at your CPU's performance as well as what your graphics card's doing.

And when it comes to the Core i7-9700K, it drives a very hard bargain indeed. As you'll see from the graphs below, its out of the box performance is actually pretty much neck-and-neck with what I managed with the Core i9-9900K. Again, apply better cooling to both CPUs and you'll probably get better results than what I've got here, but I'd argue these are still pretty good numbers regardless. 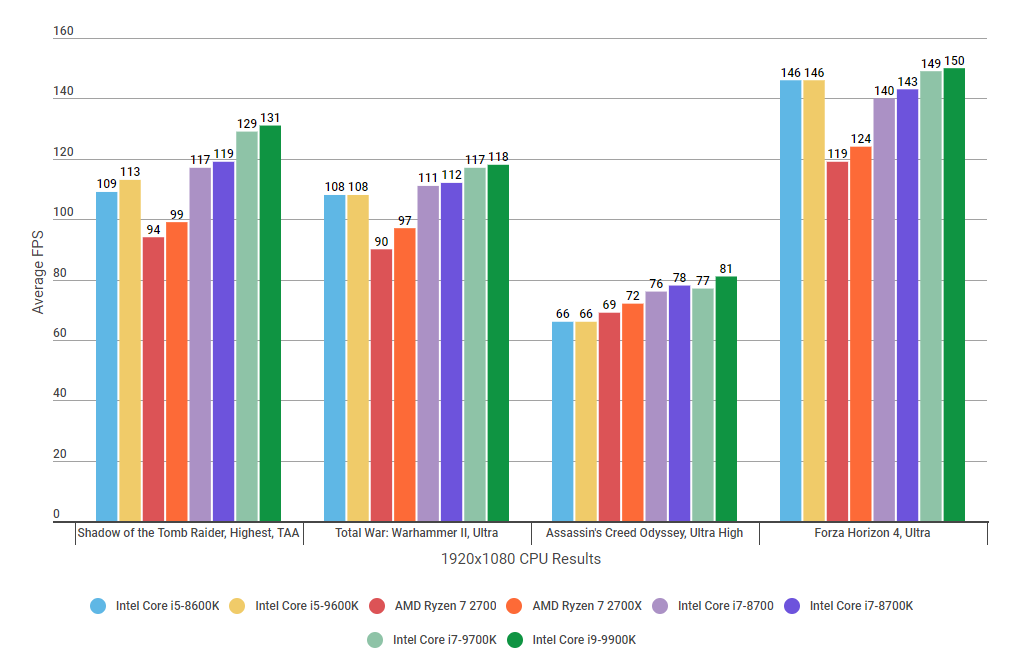 In Shadow of the Tomb Raider, for instance, I was able to get another 10fps over the Core i7-8700K at 1080p just by switching processor. That's mad! That's more what I'd expect to see when upgrading my graphics card, let alone my CPU. Of course, the Core i7-9700K's gains weren't quite as large elsewhere, but it still managed to squeeze out another 5fps from Total War: Warhammer II and 6fps from Forza Horizon 4. That's pretty impressive, all things considered, and I imagine you'll see an even wider gap with a proper liquid cooler. 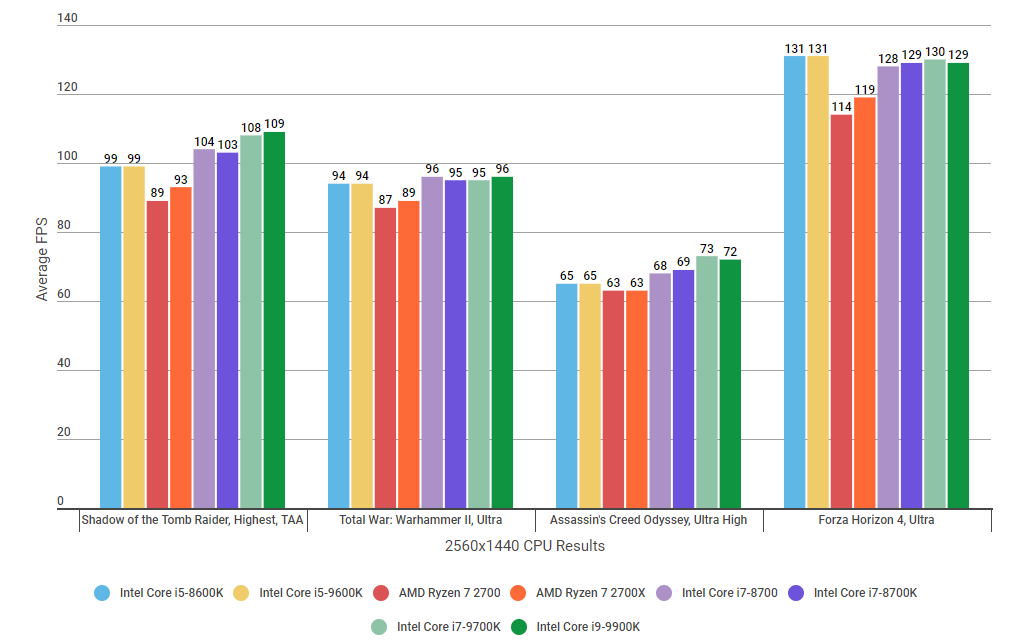 Admittedly, its 1440p performance wasn't quite so jaw-dropping, but given the general uniformity of my results at this resolution, it just goes to show how much games are still GPU-bound here, even when they've got Nvidia's GeForce RTX 2080 Ti at their disposal - and if you want to see the even flatter plateau of my 4K gaming results, then head over to my best gaming CPU article for the complete rundown.

One thing is certain, however - AMD's Ryzen 2700X can't hold a candle to Intel's Core i7-9700K at either resolution, and I'd definitely recommend spending the extra 100-odd quid if you really want the best gaming CPU that doesn't completely melt your wallet. Of course, I'll be very interested to see what the new AMD Ryzen 3000 series CPUs bring to the table once they launch on July 7th, as the $329 Ryzen 7 3700X, $399 Ryzen 7 3800X and $499 Ryzen 9 3900X chips are all primed and ready to take on the Intel big boys. Naturally, I'll update this review once I've had a chance to test them out for myself, but needless to say, they're going to have a pretty big task on their hands if they're going to beat the Core i7-9700K.

Of course, one area where AMD are likely to absolutely crush their Intel rivals is in general multi-tasking performance. After all, even the Core i7-9700K struggles to match AMD's Ryzen 7 2700X chip on multicore performance in the Cinebench R20 benchmark, and that gap will likely only get even bigger once AMD's Ryzen 3000 CPUs arrive on the scene. 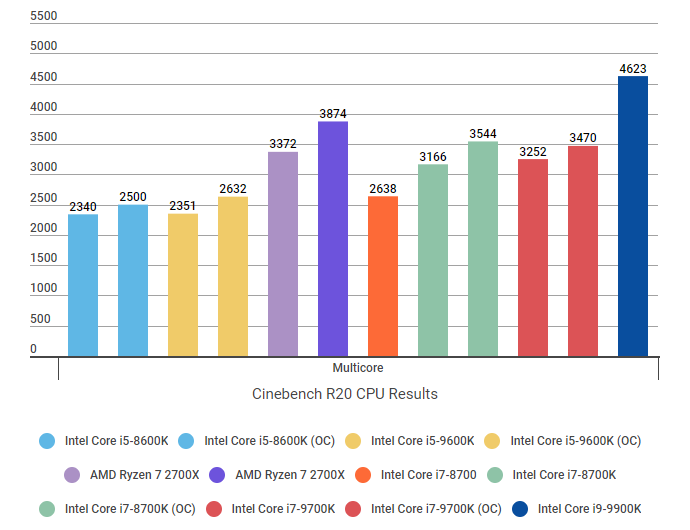 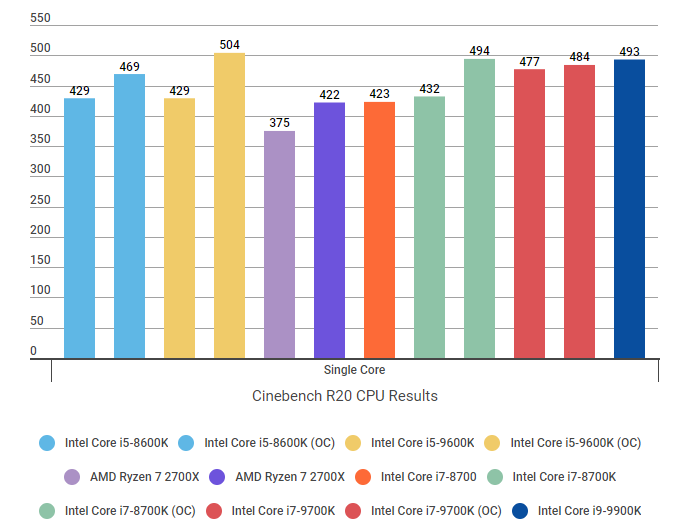 Intel still have the edge for single core performance, though (at least for now), but as I mentioned up top there, I'm really not that fussed about how a CPU handles creative applications and rendering software and the like. If you're going to use your PC primarily for that purpose, then by all means go with AMD, as you'll no doubt feel the difference when you're editing videos, rendering bits of animation or compiling who knows what into who knows where.

For those who mainly use their PC to play games, Intel is still definitely the way to go - although again, this may well change once AMD's top-end Ryzen 3000 CPUs arrive on July 7th. In the meantime, though, the Core i7-9700K is hands down the best gaming CPU you can buy today that won't absolutely cripple your bank account.