If you click on a link and make a purchase we may receive a small commission. Read our editorial policy.
Developer: Panache Digital Games
Publisher: Private Division

Letting you be an animal is something more games could do. Not a cartoon cat, or a twee fox, but a real non-human brute, forced to live in a realistic natural world, and sup water from stagnant pools because the nice stream has been conquered by snakes. Ancestors: The Humankind Odyssey takes up that challenge with some ambition and a lot of admiration for the story of human evolution. But it is spoiled by a whole troop of annoyances, a cascade of irritating visual effects, poor AI, and a clunky set of contextual controls that even a fully evolved human with all the right thumbs would throw in a river for being needlessly elaborate.

This is a third-person jungle ‘em up in which you play as a clan of hominid apefolk evolving throughout the ages, from the missing links of 10 million years ago to a more modern hairy-human. You leap through trees, eat fruit, bash rocks against coconuts, explore your surroundings, shag the nights away, and run from big cats. You also sleep your way through the slow process of evolution, which is essentially a lengthy levelling-up screen recording all the feats of learning you’ve managed. Your main goal is to carry a hairy child on your back as you go about your day, who will preserve the clan's learnings through the generations. Basically, the little ape is an XP backpack. Without them, you can’t upgrade the skill tree when you rest. 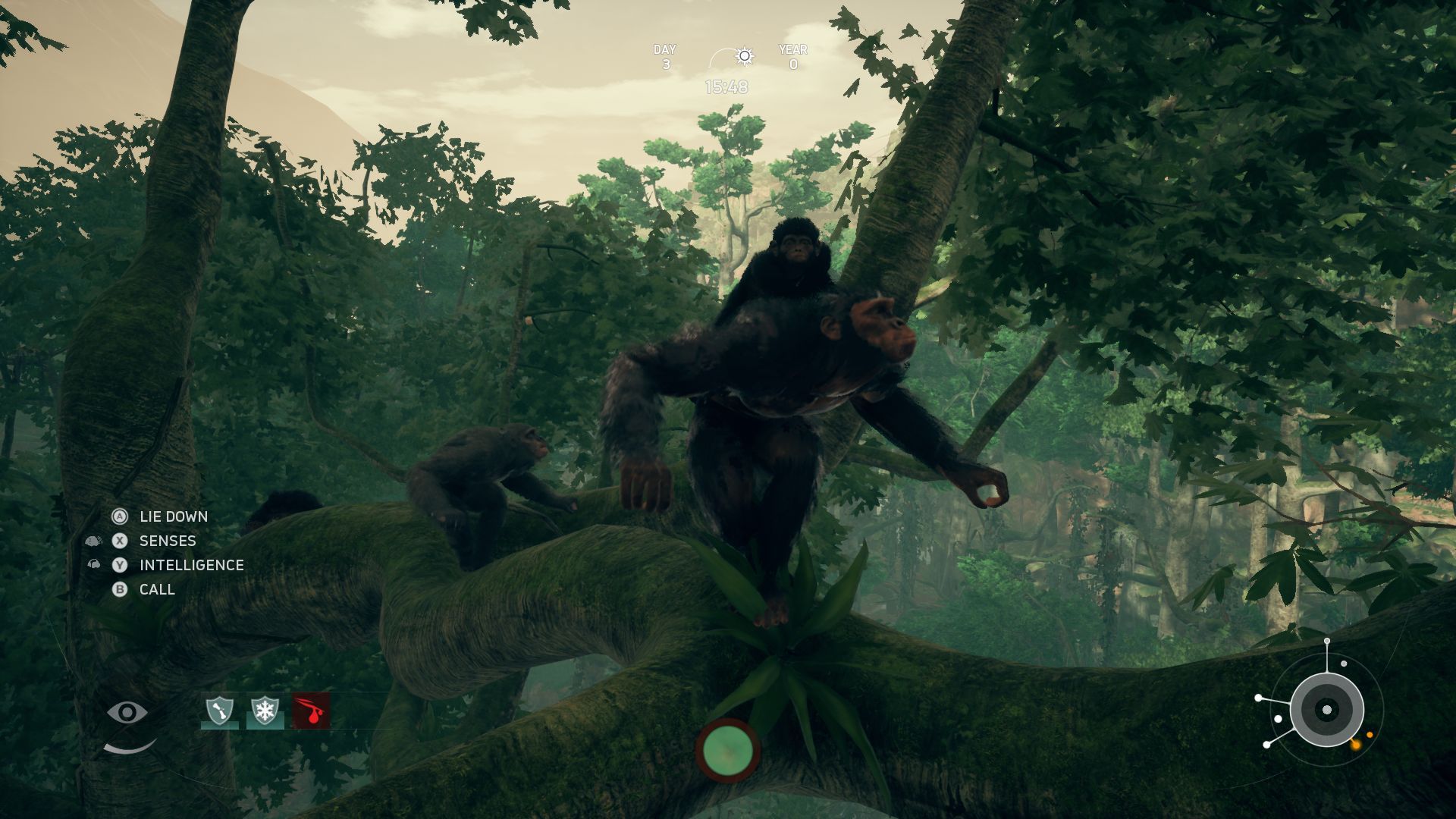 With that paragraph, I have probably given you a clearer explanation of your goal and day-to-day requirements than the game ever does. There are tutorial pop-ups for common movements, like tree-swinging and clambering, which feel mostly fluid and self-explanatory anyway. But when it comes to the finer details, it relies on an opaque “Help” section in the menu to make up for an obtuse attitude. It doesn’t really teach you how to go about the evolutionary process at the core of progressing through the centuries: you just have to fumble your way through it, like the jungle itself. ("Answers won't be given to you," says one loading screen tooltip proudly, somewhat undermining all the other tooltips.)

When it comes to exploring that jungle, there are big problems. All your primary actions are performed through a context-sensitive set of buttons. And almost all actions (at least in the early days of your hominidhood) must be performed while standing still. 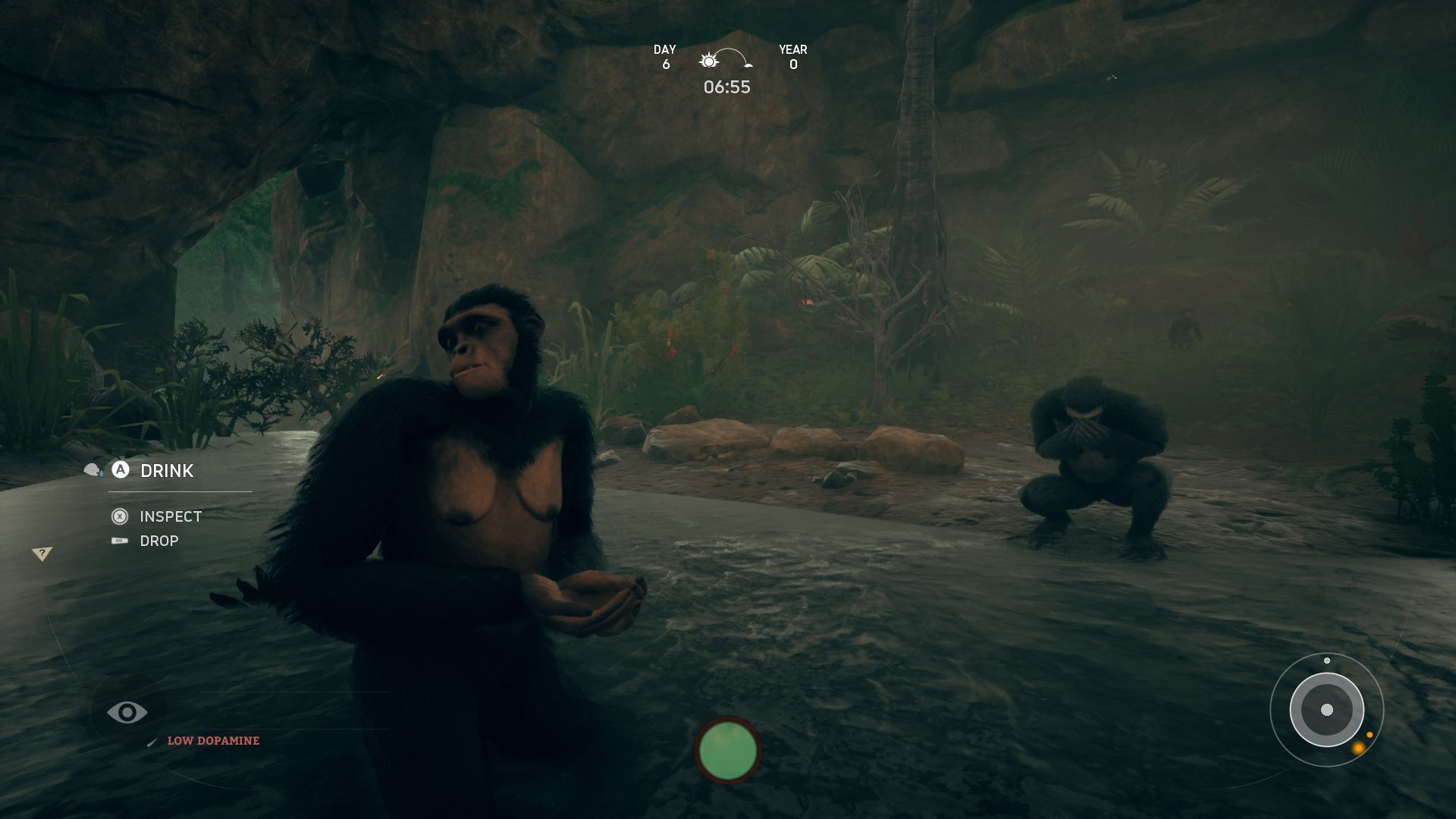 Key among said actions are your sensory abilities: smelling, hearing and “intelligence”. Basically, you hold down a button to smell, or listen, or just have a good think (detect things that are far away). At this point, the screen becomes busy with icons, ripples, or other weirdness that makes it hard to know what you’re meant to be looking for. You get used to it, but it’s a muddy sort of psychovision. And it’s nothing compared with the visual noise that erupts in other parts of the game. 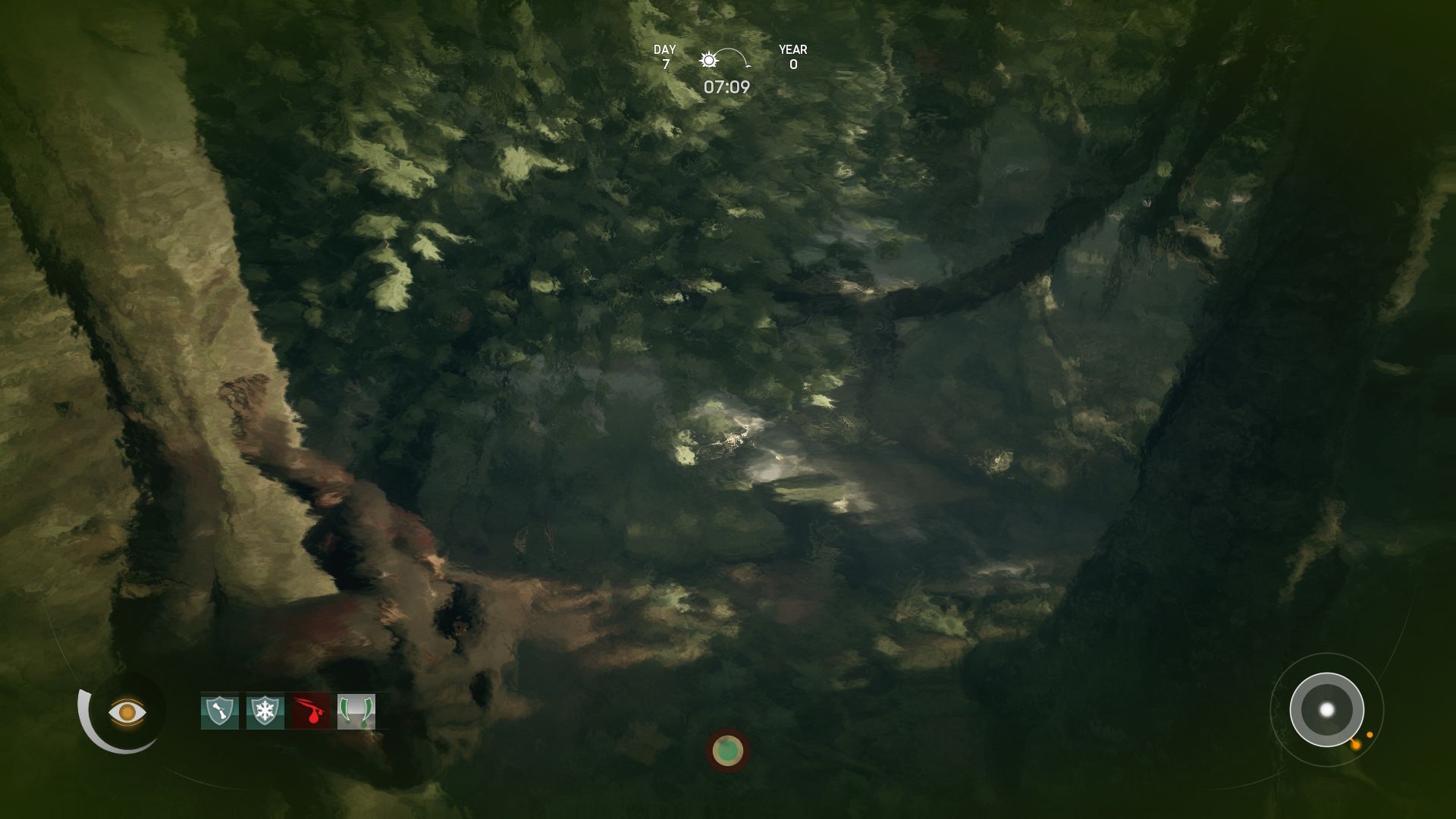 There’s a black and white filter when you are experiencing fear, for example, which fills the screen with animal growls and flashing hallucinogenic teeth. And there are other states of impaired vision for all sorts of reasons. Sleepiness, food poisoning, weather, snake venom, panic, low dopamine levels (really). Each is a different sort of assault on the eyes, a darkening, a wobbliness, a fog. Lots of games do this, and yes, these blurry moments are meant to be a representation of various emotions or status effects. But here they are especially frequent and obstructive. In a game about picking out solid tree trunks from foliage as you run, where you break your legs if you miss a branch, you need clear vision. Imagine going downhill mountain biking with Vaseline smeared all over your biking goggles. It’s unpleasant. Also, a panther is chasing you. 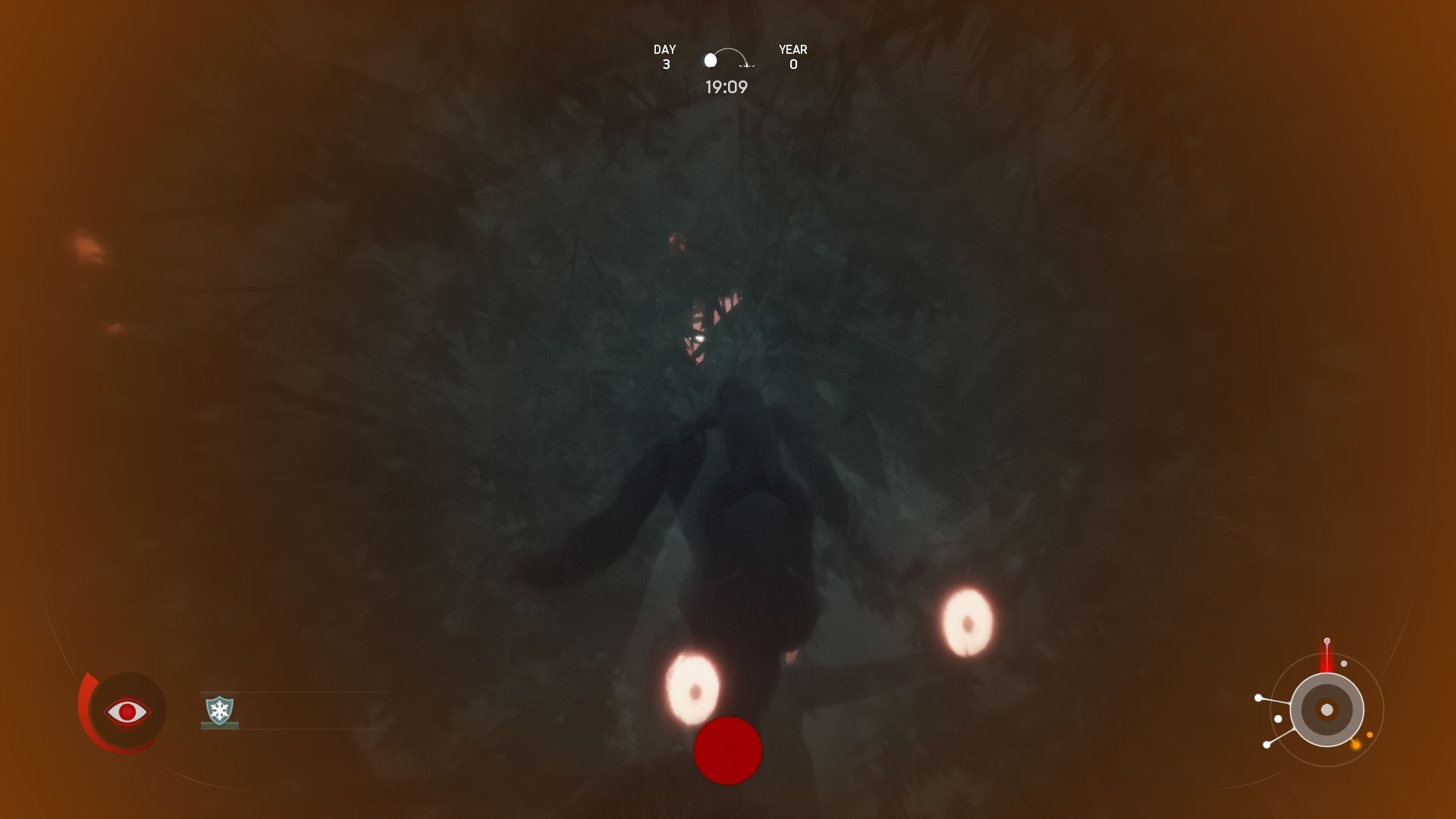 As for all the other things you’ll do - picking up fruit, giving sticks to your clan mates, drinking from streams, remembering a distant hog you once saw - they're all achieved via the aforementioned contextual controls. And between them, those controls have to cover a lot of actions. The range of things you can do is impressive (you can combine items by holding something in each hand and bashing them together, for example, which is neat if cumbersome), but it does mean some of those actions are overcomplicated.

One of the first things you do in the game is convince a chimpchild to come out from under a rock. It’s a matter of pressing the B button over and over to comfort it - or so the tooltip says. But when a little meter appears, it’s unclear if you’re supposed to fill it up or reduce it. Eventually, you understand it’s a timing and rhythm thing, like many actions, but the introductory confusion sets the tone for the rest of your life in the rainforest.

There are controls nested within controls, sub-controls, hand-swapping controls that change the other controls, endless holding down of buttons: hold Y to look at this thing, hold X to smell it, hold B to listen to it. It gets annoying fast, and although that annoyance eases off with repeated use, it never truly evaporates. It does not help that the AI of your clan mates leaves them vulnerable to frequent ambush predator attacks. You end up playing an endless game of chimpanzee tamagotchi, doctoring your ape pals' wounds with special fruits, only to see them savaged by another lion seconds later. 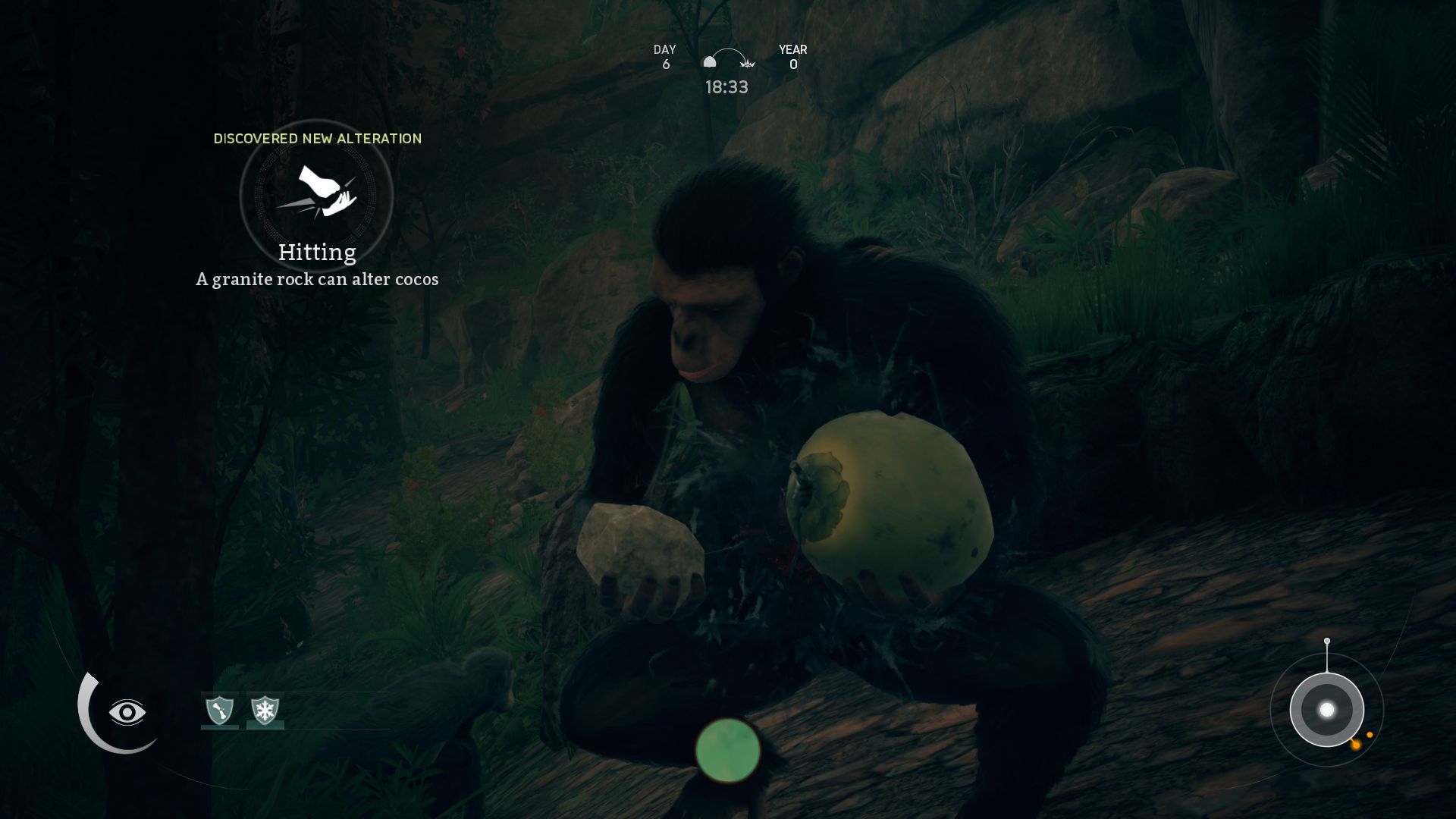 Contextual buttons also raise a problem as old as the chimpmen themselves. When you are in a big tree and there’s a coconut right in front of you, you press A to pick it up. But A is also the button to sprint and leap. Yep, say hello to the classic design beshittery of cramming multiple conflicting actions into one thumb movement. Try again and you’ll see a little white glow covers the coconut, to show when you can pick it up, but inching around a fruit to find the exact angle at which you can pluck it is tiresome. The leaps to your death start to seem inviting.

In its desire to fit many actions under one clunky system of context-sensitivity, the game has completely missed the immediacy, the quick-wittedness, or the physicality of being an animal. Our chimpanzee-looking ancestors probably didn’t freeze mid-danger and think: “I should use my hearing now.” They just heard stuff. 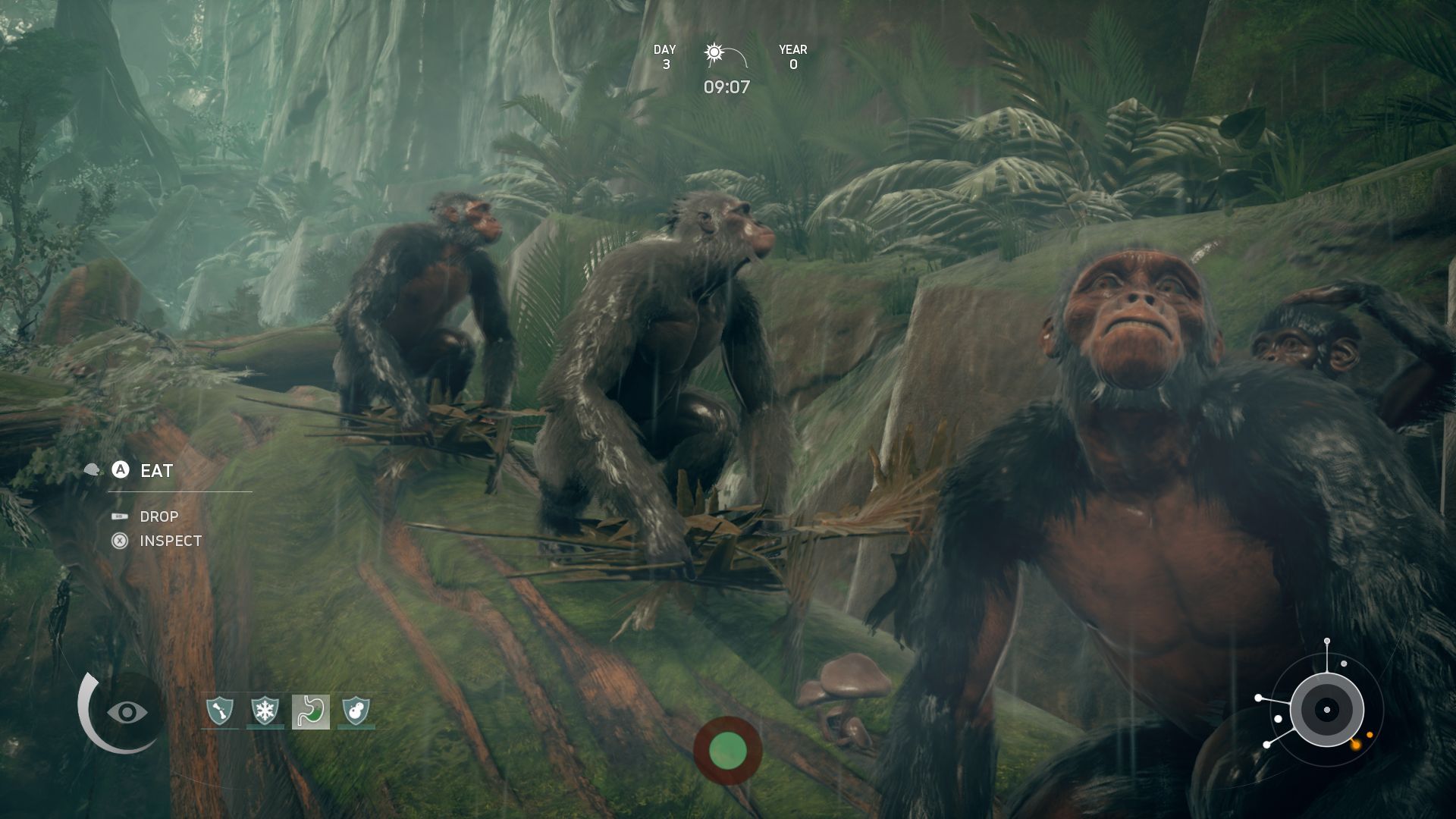 There are things to admire. I like the tree-climbing in particular. The forest floor is a dangerous place, dense with snakes and boars and ancient lions. So the canopy quickly becomes your road network. Big leaps see you sliding down trunks and grasping onto branches like a bonobo in a BBC documentary, and a bad fall can leave you with broken bones. It’s sometimes hard to make out where to jump amid the thick leaves, but after a while this just feels like part of the tree-hopping puzzle. It’s the most compelling part of this whole nature ‘em up (even if you mostly tree-swing to avoid the rubbish slow-motion dodge-or-attack mechanic that triggers every time you meet a predator).

There are tales of high drama too. You can recruit new hominids to your clan if you find some in the woods and help them out. Some want fruit, others need medicinal plants, and so on. After some animal maulings left me as the last surviving member of my line, I limped back to my home cave, slept it off and went recruiting in the morning. By the end of the day I had three adult ape pals. Then we got to shagging. Yeah, you can groom your hairy pals to form couples, then lie down and choose “mate” from that sexy contextual menu. Soon there were four infants. A clan back from the brink. 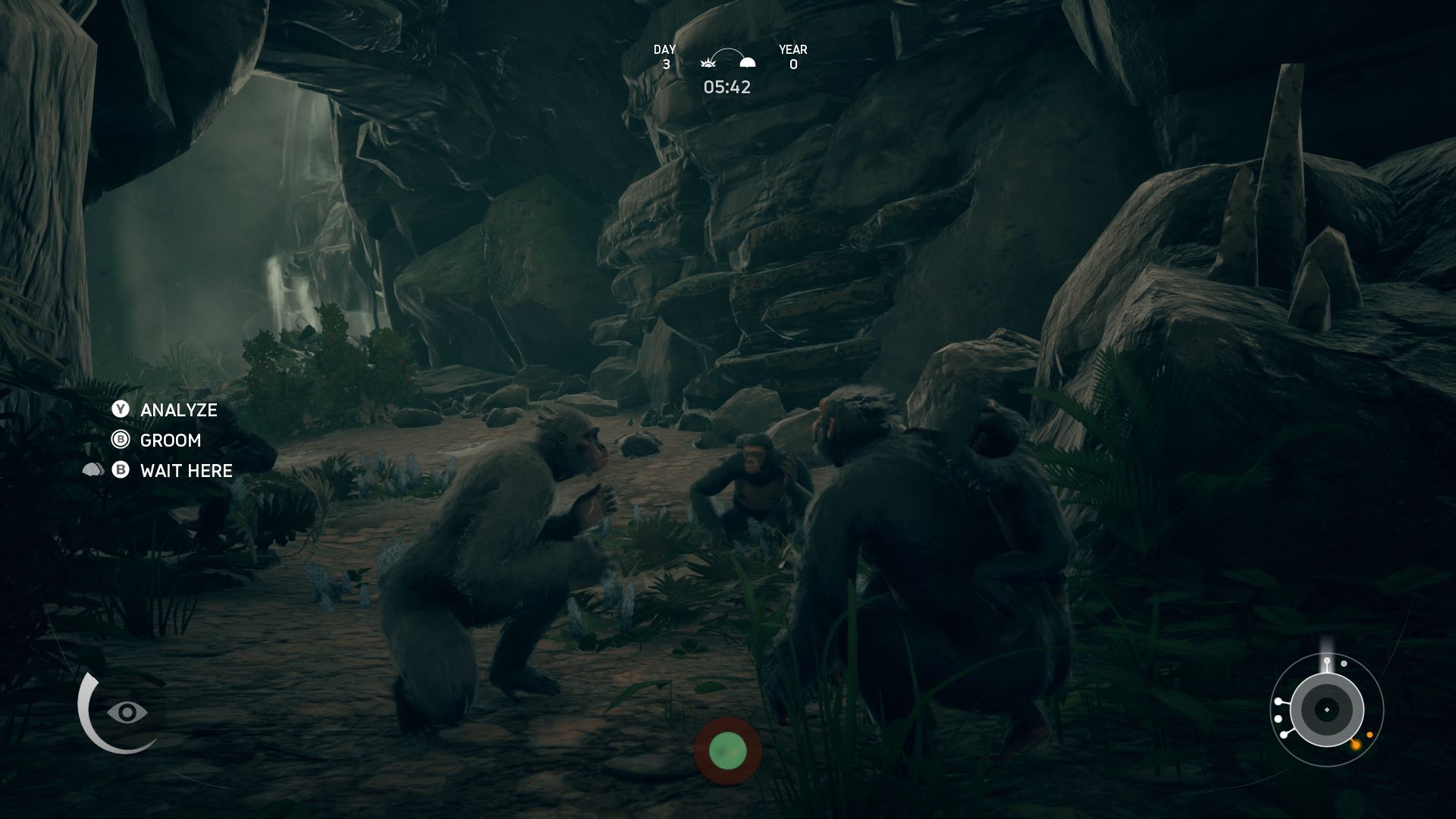 There is much more to this baboonery, too. But I can’t possibly go into it all. There’s a real depth for those willing to put up with frustrating controls and repetitive animal attacks. The evolutionary skill tree, for example, unlocks new knowledge as you experiment with obsidian rocks and dead branches. The child-hominids sometimes get helpful mutations that carry on to the next generation, like having a better sense for when a giant tiger is about to eat them. And the roomy jungle, with distant question marks to explore, sometimes makes it feel like an Ubisoft icon-clearer with a more interesting theme.

But for every praiseworthy element, there’s two or three irritations. When you use the skill tree, for example, that lack of clarity creeps in like a slithering python. “Assign neuronal energy to initiate how dexterity will improve,” says one early skill upgrade. What? Another one reads: “Assign neuronal energy to initiate analysis capacities’ evolution”. WHAT? It’s indecipherable. I get that this is probably a way of talking about skills without using gamey lingo. But what's the point of replacing one set of inaccessible phraseology with another? 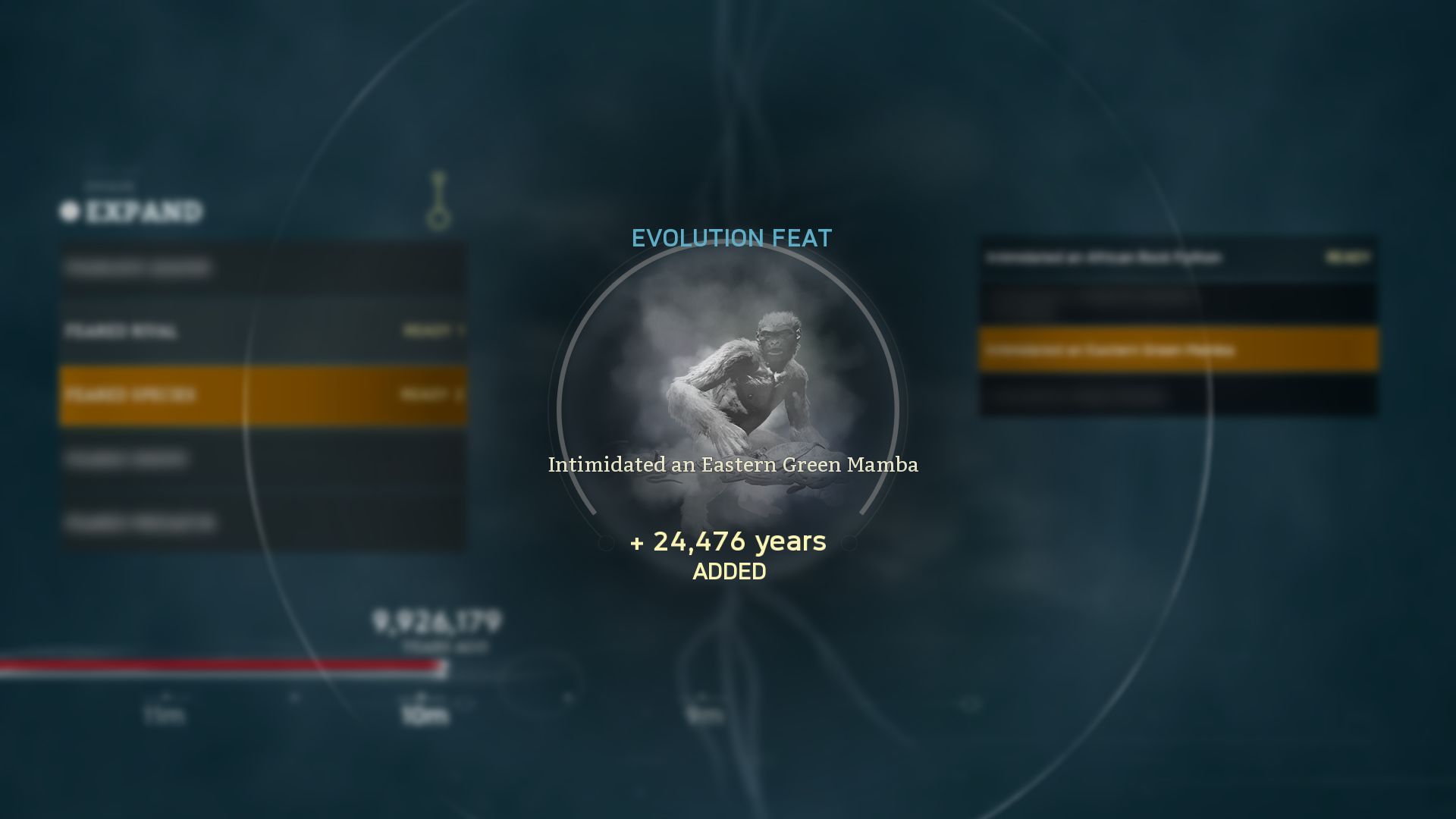 To sum up, Ancestors is a mish-mash of ideas, some good, many awkward and poorly executed. Down another evolutionary branch, this might have been a solid ape sim about swinging from branch to branch and raising a family of hominids across the eras. But here, even the sometimes pleasing “floor is lava” tree-swinging can’t be saved from the slavering jaws of those clingy context-sensitive menus, nor the mess of barely explained HUD elements, nor the obnoxious video filters.

I wrote most of this review, then felt maybe I was being too harsh. So I took a break and went back. I wanted to enjoy it. This time I’d play slower, explore a bit, find new foods, new tools and places. For a while I did that, and thought: maybe this is just a game that rewards people with more patience. But it was not long before I was being devoured by a forest lion because of the crap dodge mechanic. That ape was the last primateperson of my lineage, and although I could continue by going back to the main menu and trying again from a checkpoint, I decided to let the future human race die out. In many ways, it was a relief to be so thoroughly digested. Thank you, big cat. You can keep this jungle, I don’t want it.