If you are one of the three people I gassed to death last night in a giant plyboard stunt arena, I am sorry. I was overly enthusiastic about the new gauntlet that appeared on the map of Apex Legends, the game we were playing. That enthusiasm got to my head. I misjudged your friendly rifle potshots as an invitation to fill your lungs with toxic miasma, and in the heat of the moment I threw a canister of poisonous fumes at your feet, and murdered you. I apologise for any harm you interpreted from this unfortunate vapour delivery. I am working to become a better person. Mostly by whooshing down this slide and leaping through a flaming hoop. Weeeeeeee!

That new stunt zone from the recent Apex Legends update is neat. But, oh boy, the pop-up loot shop that accompanies it needs to be locked in a swamp hut and gassed.

First, the gauntlet. It’s quite basic but a fun addition nonetheless. A congregation of audience stands, miniramps, and two big slides converging on a fiery ring, which has a fancy suit of purple armour in the middle for players to fight over. One of the new ‘challenges’ is to nab this piece of kit, so Respawn definitely wants me to fill you with bullet holes for it. The recent update also brought a temporary solo queue to the game, which means I know you don’t have any backup. Eat lead, fu-- oh, you killed me, never mind.

But this gauntlet isn’t the only extra feature the Apex Devends have introduced to their battle royale. There’s also a new limited-time shop, with its own currency and a new type of loot pack. It’s branded the Iron Crown Collection. And it has all the appeal of a stingy carnival stand that won’t give you the big pink rabbit even though you knocked down all the cans. PC Gamer have already pointed out that to get a posh axe for Bloodhound, you need to pay a minimum of $170 while navigating the game’s characteristically arcane economy (trading your real money for Apex coins, then Apex coins for ‘Iron Crown packs’). 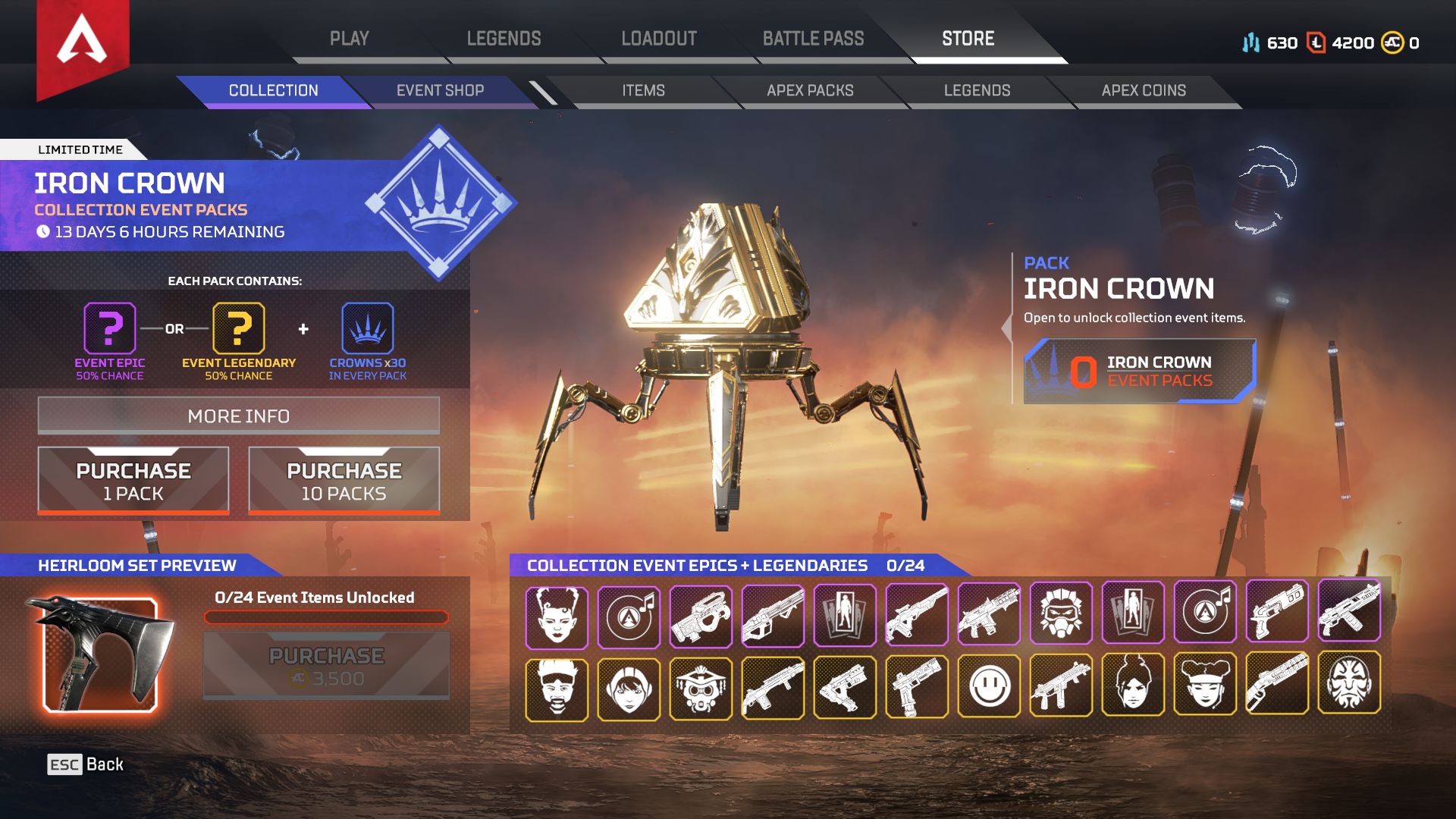 The posh axe has a price tag of 3500 Apex Coins (about $35) but the button to buy it only activates if you’ve already bought the other 24 special items included in the event, for a lot more money. That feels grubby. Imagine a claw machine that has a golden bear on a shelf inside, but the shelf only collapses if you first collect all the smaller, silver bears on the machine's bottom floor. (Actually, god, that probably exists, don’t think about it).

This is standard free-to-play shenanigans, but it is still worth spitting on the ground every once in a while when faced with this, as some Apeleggers seem to be doing. A brief glance at the game’s subreddit shows how irked many players are at the stinginess of the event. All the top posts at time of writing are complaints. One of those complaints is that free-loaders can only get two of these special Iron Crown cosmetic items by completing the new challenges. You have to buy the rest, there's no way to grind some out. One player has translated the Iron Crown shop from Ape Monies to dollars for ease of reading. It’s worth mentioning that the posh axe will be shuffled into standard Apex packs after the event ends, but, uh, good luck on that scratchcard.

It’s a shame, but also not much of a surprise. Loot boxes gonna loot box. Free-to-play gonna free-to-play. The base rewards for levelling up in Apelegs are already pretty stingy in my book (‘Brendan’s Big Book Of Bargain Bypassing Bastards’, self-published on Amazon). But extraneous currencies and elaborate shop fronts are always an extra disappointment.

Oh well, back to bumsliding around the gauntlet.