Dunwall is renowned for its striking dystopian aesthetic, blending blinding walls of light with spindly steampunk stilt walkers. But the most memorable part of gorgeous action-assassin hit Dishonored has, for me, always been the boozer where you hang out with your pals between missions: The Hound Pits.

It’s a lovely looking pub, for sure. But coming from Dublin, where subversive relics of independence like The Confession Box are open about the intertwining nature of pub culture and rebellion, my interest is rooted in more than just the aesthetic. It makes sense to me that The Hound Pits is where Corvo and co meet to discuss their next political assassination. So, I reached out to Arkane Studio's Harvey Smith, co-creative director for Dishonored, and chatted about the reasons why pubs make class revolutionary bases.

“A pub made a natural hiding spot,” Smith tells me, via email. “Comfortable, familiar, and secretive.” Pubs, by their nature, are collectively championed by the oppressed working class - as Irish poet Flann O’Brien once wrote in his poem, “The Workman’s Friend” (seen here set to music by Brendan Gleeson and his son Fergus.)

“A clandestine meeting in a pub is in our cultural DNA, whether it’s meeting planning a revolution or meeting a lover,” Smith says. “Examples abound, from the Prancing Pony in the Lord Of The Rings to actual events during the American Revolution.” 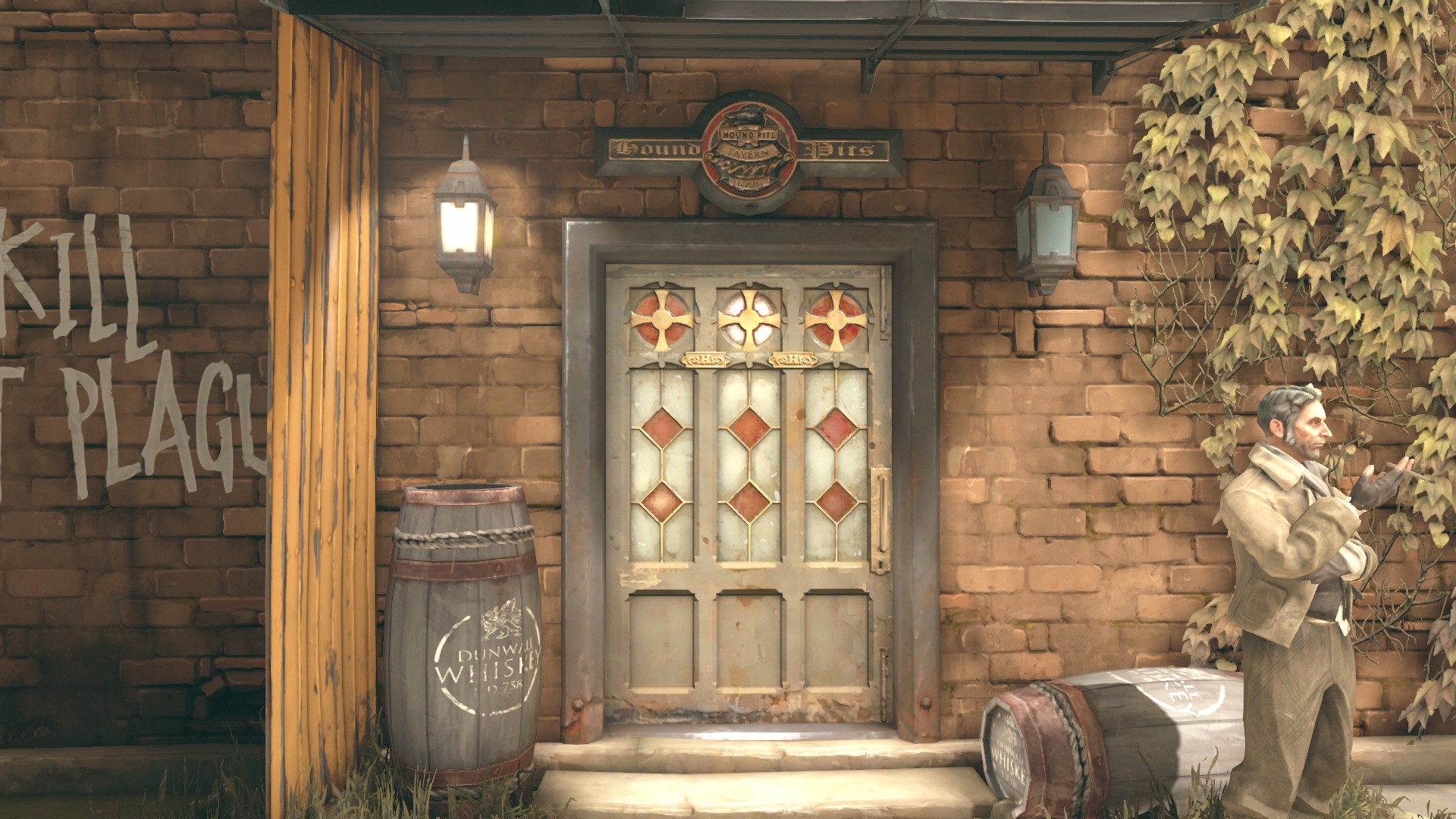 “When you’re ten years old, it’s the starting point in D&D games, despite the fact that you can’t drink yet.” It rings true. Taverns are often associated with the origins of a quest, or with meeting up with companions in a safe, warm place with a roaring hearth and nourishment aplenty. Food, beer, laughter — and, of course, a desire to conspire.

Smith says that the team at Arkane weren’t always set on implementing The Hound Pits into Dishonored. Early in development, when the game took place in London as opposed to the fictional whaling town of Dunwall, Corvo’s hide-and-seek spot wasn’t in a pub at all. Together with co-creative director Raphael Colantonio, Smith had visualised “a ruined castle on a river, outside the city, where a group of ascetic assassins would paddle into town under darkness of night to kill a high-value political target.”

Naturally, things changed during development. As Smith and Colantonio iterated on Dishonored’s design, they eventually decided, together with the level design and art leads, that a pub was far better suited to the Loyalists’ rebellious needs.

The Hound Pits is not just four walls of code with some beer taps inside - it’s got a culture and heritage, which further accentuates its stalwart stance in opposition to the hi-tech dystopia of plague-ridden, techno-obsessed Dunwall. Originally called The Bear Pits — an homage to the first line in Thief — the team decided to focus on a pub known for dog-fighting instead. It wasn’t until much later in development that said fighting was cut from the game. “We left the signs up, showing that in the past people had wagered on horrible dog fights,” Smith says. “A stomach turning detail from a crueller time.” He explains that by grounding the pub in real, gritty history, the effect of reality outside the game enhances the worldbuilding within it. 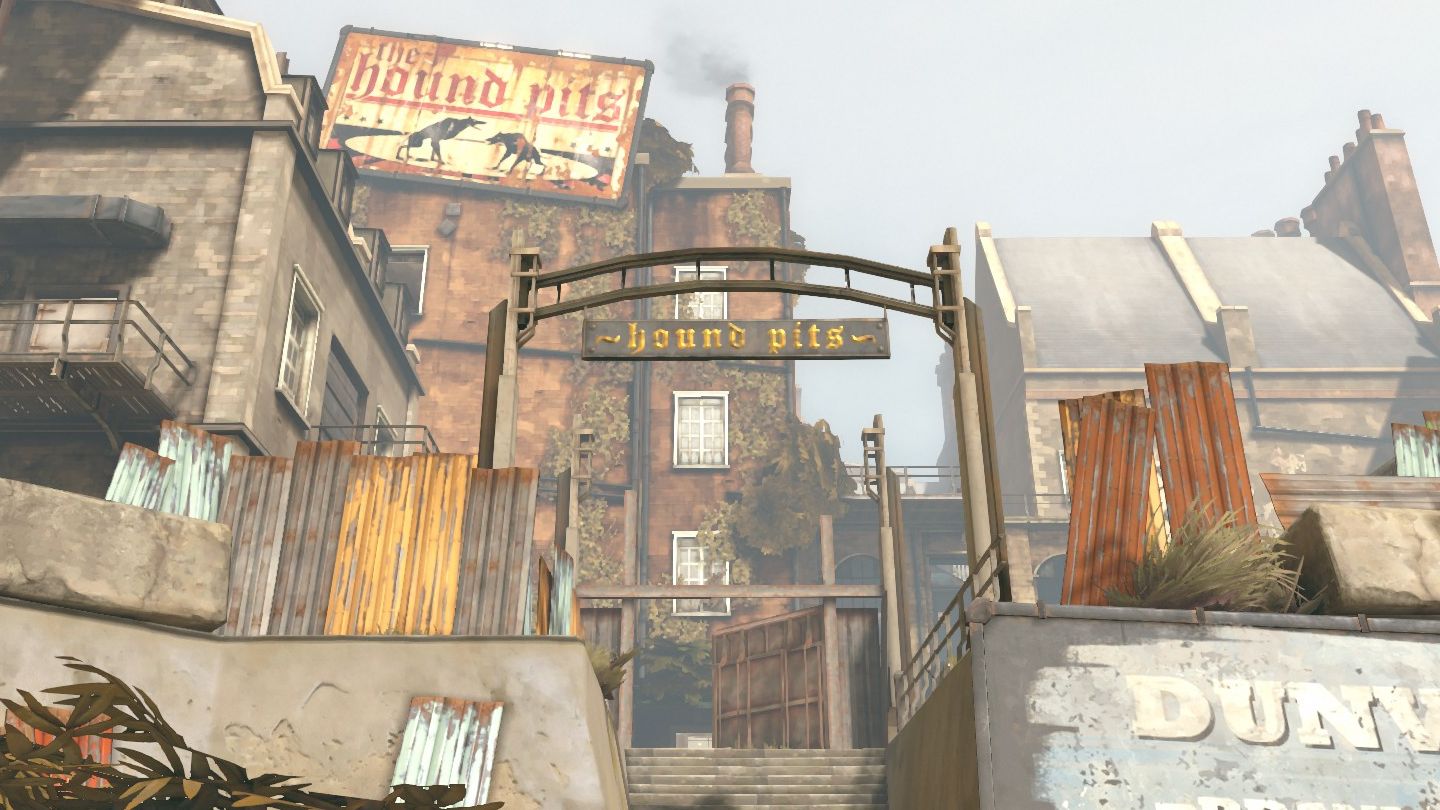 There’s more to it than assigning the pub a fictional history, though. Smith tells me that when they were designing The Hound Pits, Arkane artists Sebastien Mitton and Jean Luc Monnet made their way cross-channel from France to the UK. The aim was to embark on a photography road trip, where the photos were all of deadly pubs in places like London and Edinburgh.

Monnet also reminded Smith about how Lyon, in France, is a “city of secrets,” referring to its notorious traboules - which Smith’s auto-correct keeps changing to the far less cool but more endearing “tea pipes.” “I lived next door to one of the city’s biggest traboules, and visited a few others,” Smith explains. Traboules are narrow passageways that thread through large buildings full of apartments and shops. They’re like shortcuts, designed so people don’t have to leg it around an entire block to get somewhere that’s right beside them. “They also turned out to be very useful when the Resistance needed to avoid the Nazis,” Smith says.

This is an important point. Hidden passages and secret avenues play a major part in why pubs are revolutionary magnets. They’re inconspicuous, dimly-lit, and often teem with nooks and crannies barely big enough to fit a human being. This is true of The Hound Pits as well: the third floor is totally locked off, the rooftop connects to an adjacent tower, and the basement is directly linked to the sewers below. If you’re in desperate need of an escape route, The Hound Pits has choice.

This hearkens back to my earlier example, The Confession Box in Dublin. It’s not an isolated case - The Old Stand and The Swan are among a load of other pubs that served as places of respite for rebels - but The Confession Box is the one I know best. Its connection to the 1919 Irish War of Independence is pretty subtle today, over 100 years later, in that there’s only about a million pieces of memorabilia lining its tricolour-laden walls. You’d never know, unless you knew. 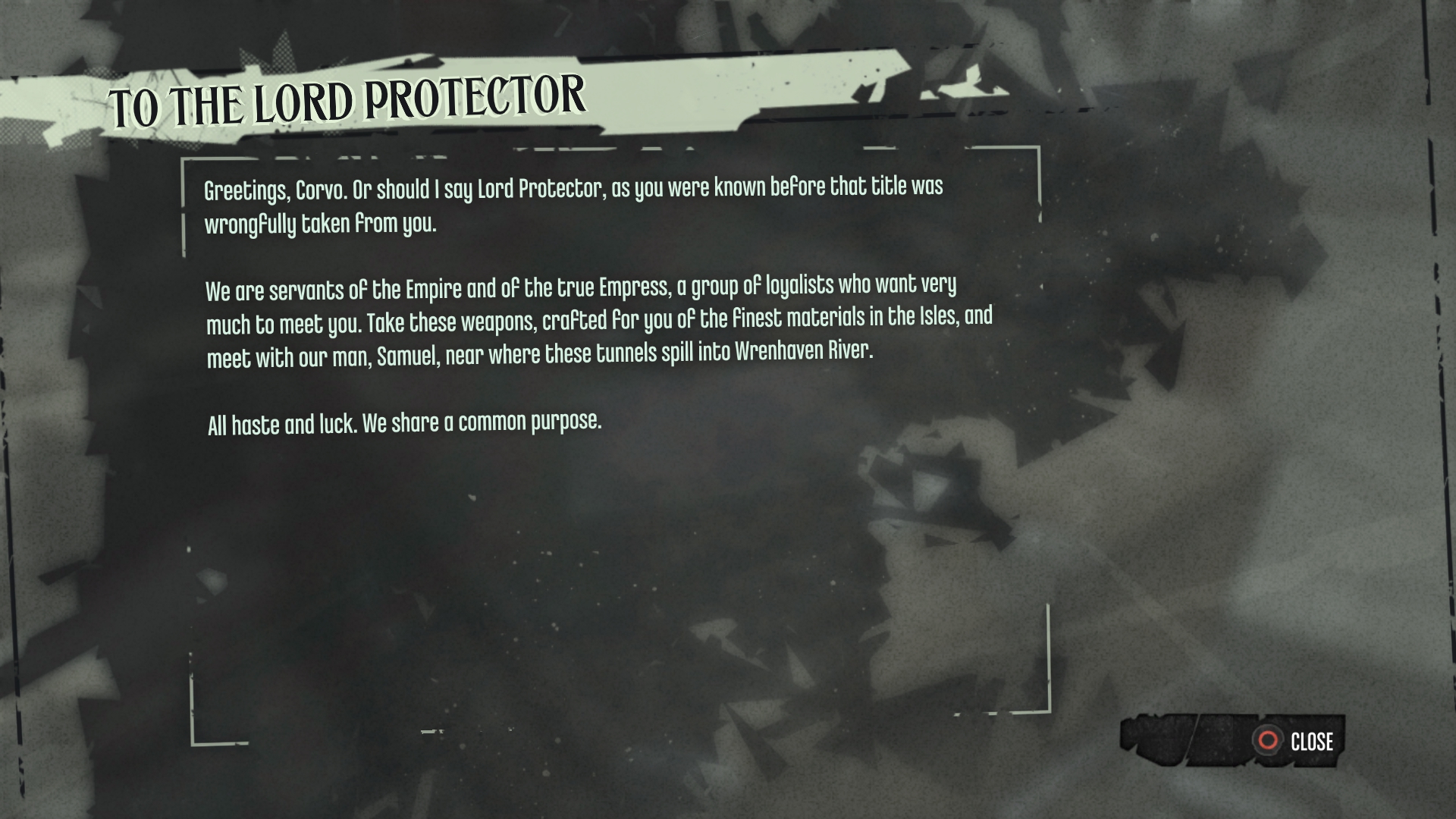 Beyond decor, the pub was laid out to favour rebels-in-hiding. The bartender is the first to see people (read: British soldiers) enter the pub, and is able to give clientele (read: rebels/resistance fighters/whoever) fair warning to pull a runner. Irish publicans were generally sympathetic to rebellion after mistreatment by drunken colonisers, and the ubiquitous nature of pubs made them a perfect place to hide fugitives. It's also reflected in the etymology of The Confession Box's name. In the aftermath of the 1916 Rising, Irish rebels were excommunicated from the Catholic Church, and would go to what was then The Maid Of Erin pub for confession. They even had a proper bishop knocking about, and the story goes that even Irish revolutionary Michael Collins regularly showed up for some illegal communion wafers.

Pub culture is intertwined with a place's history and culture. According to Smith, Dishonored tells a story that treads a fine line between gritty realism and dark fairy tale. “The princess locked in the tower, here, but with a twist,” he says. But as well as this narrative blend of the real and fantastical, Dishonored also pairs architectural opposites. Smith says that in the US, while some cities like San Francisco and Boston are exceptions, people tend to rebuild a lot — “everything is new.”

“When we visit Europe, it’s mind blowing,” Smith explains. “I lived in Germany for three years, and France for four; and the architecture is so different, so bespoke. Many irregularities, because parts of structures were made, repaired or replaced at different times, sometimes decades or more apart.” 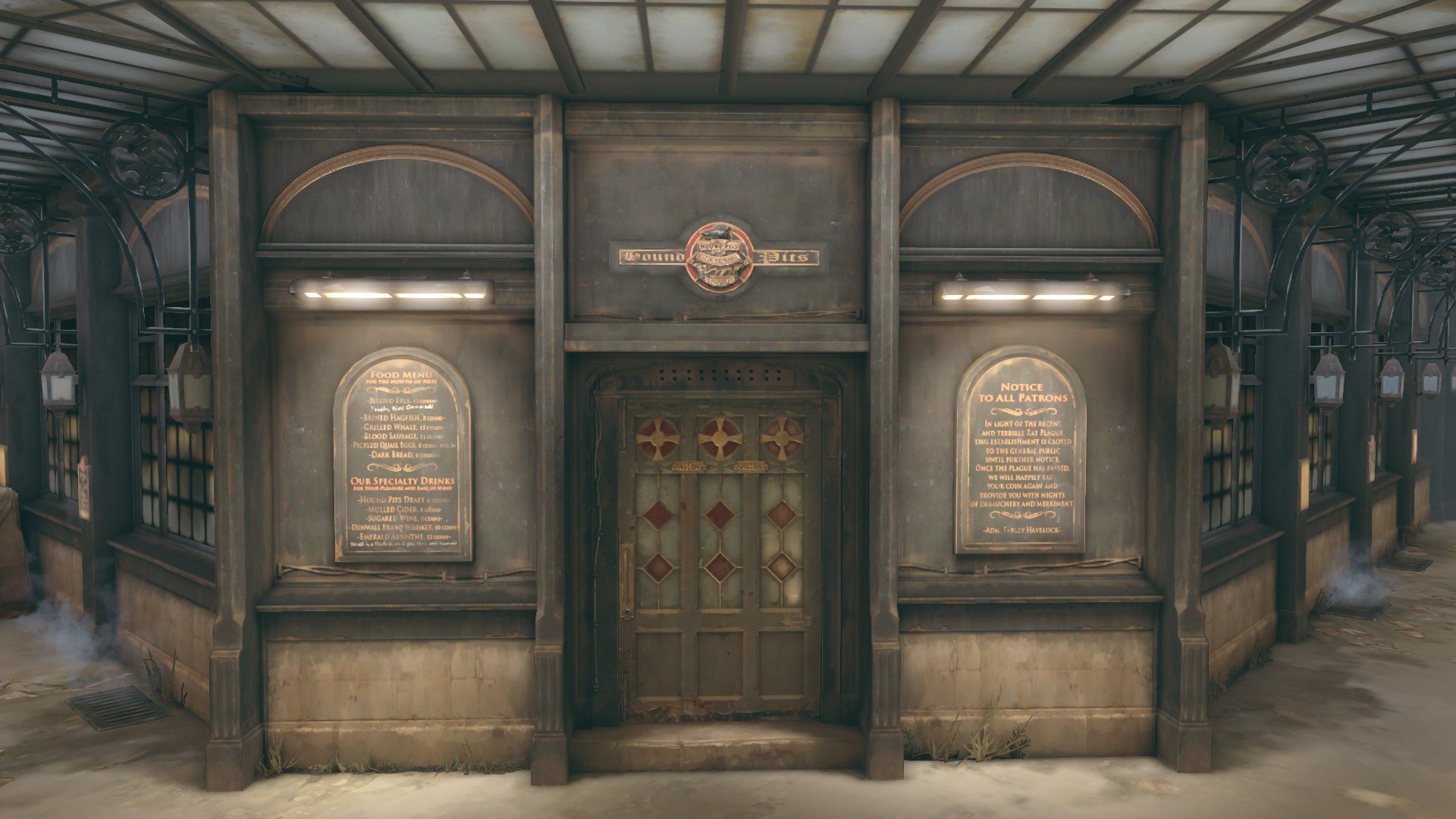 “There’s a sense of age, of long decades or centuries. Stone steps worn down and smooth, like they are carved from cheese. Stone cools or heats differently, and you can feel that when you’re sitting there having a beer at night, or morning coffee.”

“Here in Texas, there are restored buildings from the 1800s, with long wooden floors and brick walls, made to dimensions we don’t use much anymore. And it feels good to even be there. But in Europe, places are so old, predating standardised tools, windows, door frames, wall thicknesses, or step dimensions.”

He gives an example from visiting a restaurant in Vieux Lyon for the first time. Smith stepped back out of a waiter - and almost fell into a hole in the floor. “It was a circular stairwell down into the basement and wine cellar. No sign, no railing. Just a hole in the dim lighting, near the middle of the restaurant,” he says. “My American brain was shocked and enraged. Then later I realised how interesting it was that nothing was modular.”

Smith says that in the majority of the US, contemporary buildings are constructed in adherence to safety regulations to standardised measurements, allowing most folks to walk around on auto pilot. Although The Hound Pits shares a cultural history with real-life rebellion, it also resists the contemporary urge to build things that look like they make sense. Traboules in Paris are not built in a way that suggests, “ah, they got a mathematician on board for that, good on them.” They are small, ostensibly impractical, and yet far more purposeful than something built to look refined.

As a result, The Hound Pits is also architecturally detached from the dystopia of the rest of Dishonored, much like old pubs standing tall in modern cities all over the world. Old, battered stone, an outward appearance of near-dereliction, and yet home to a beating heart of revolution more vital than the metal engine of progress.

“We deliberately wanted to give the player a respite; a place to interact with the very mundane, vulnerable characters there; a sense of moving from the familiar and comfortable to the rotting, flooded, dangerous, diseased dystopia beyond those walls,” Smith says. “Leave the warmth of the pub, set out on the chill waters of the river, and enter an unwelcoming place of death. The pub was generally not hostile — no tense sneaking required — so the contrast with the rest of Dunwall was powerful.”

And this contrast comes full circle at the end of Dishonored - if you manage to get the low chaos ending, that is. In that version, Dishonored concludes with a scene of the pub reopening, where Corvo and loyalist boatman Samuel can be seen chatting over a couple of drinks. “We loved Samuel Beechworth, and wanted to imagine him rising in station, owning The Hound Pits Pub itself,” Smith explains. It’s only fitting that the rebels frequent their base of operations even after the revolution is over. It's something that is truly theirs.

Perhaps that’s why pubs in real life - the proper ones, not the shells of old pubs with Wetherspoons inside - always have a bit of revolutionary spirit. Sure, that could come from a patron shouting at the bartender and swearing that he's “not actually that drunk.” Or maybe it’s because these places once served as the meeting points for brave souls who broke the shackles of oppression, before basking in their victory over a nice, cold pint.