Space survival craft 'em ups can be pretty grim places, what with the lack of oxygen and constant threat of being eaten alive by the resident fauna and all that, but for some developers there's nowhere more hostile than the mothership from which they all originate. “Throw a dart on Steam,” says Joe Tirado, head communications honcho for Astroneer, “and you could probably hit a bunch of other things [like ours]". It's partly why Astroneer adopted such a bright and bubbly exterior during its run in early access, he adds. Originally, however, it was going to be a very different game indeed.

"Early access was good because it allowed us to figure out our identity and not just throw all the money on one idea," Tirado continues. "If we'd done that, we would have ended up with an extremely dark and lonely game, which was actually the first prototype. But as we went further and further, we realised people wanted something that was different from a normal space game, and I think we pushed that all the way to the other side of the spectrum with an extremely whimsical, light-hearted, not very dangerous game. It's supposed to be a very relaxing experience, and we actually found a place where people love that."

And soon, Astroneer will be evolving again (although not quite to the same extent as that journey from its original prototype) with the arrival of the long-awaited jetpack, or as developers System Era Softworks endearingly call it, the "EXO Dynamics Personal Mobility Object". Due to make landfall in an upcoming update, I went to see it in action while I was over at PAX East, where S the developers were demoing an early version of it to the public. 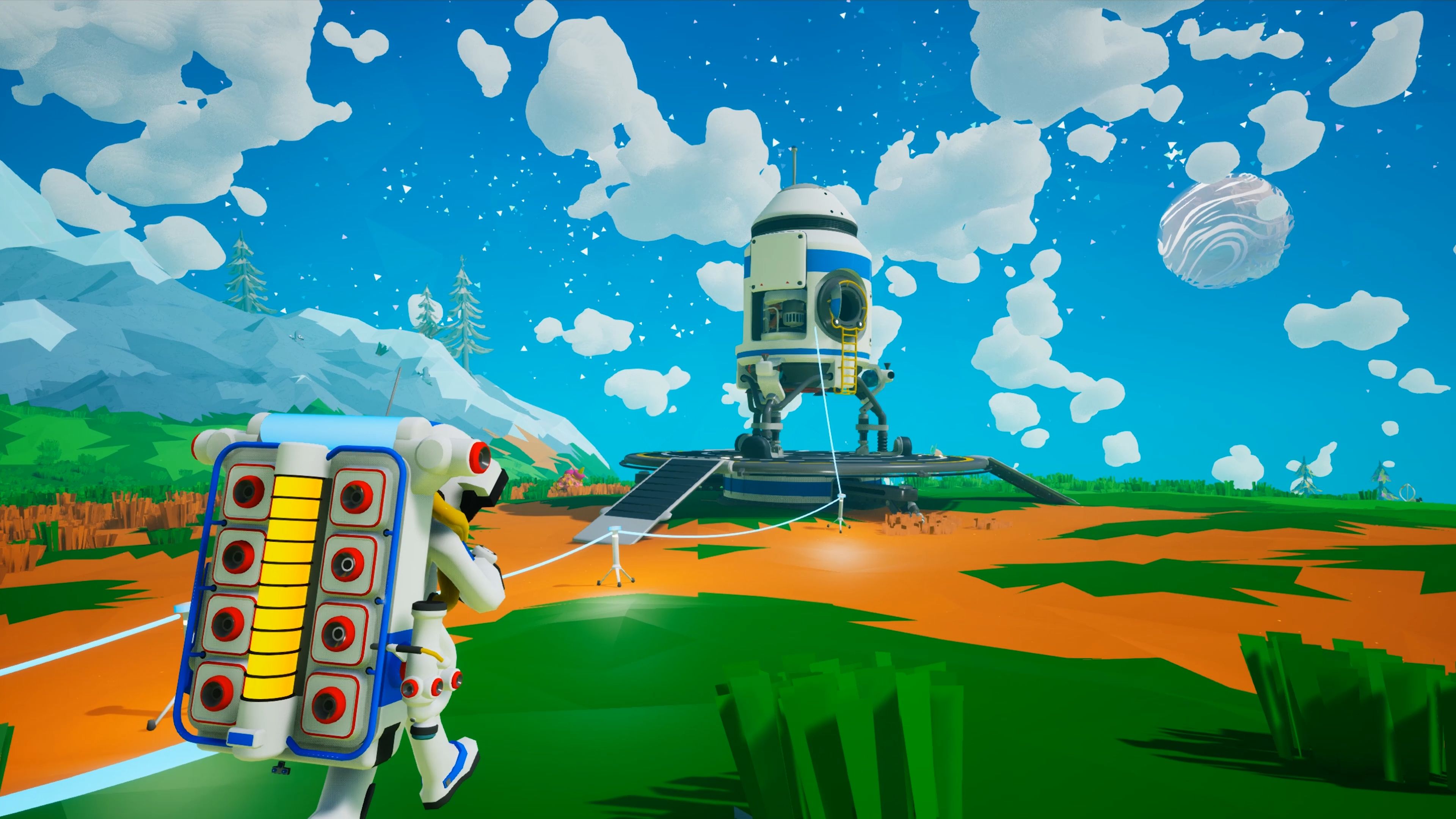 As I watched my little rubber space man leap off into the unknown, I was surprised to learn the jetpack was actually a fan request rather than something System Era Softworks had planned for all along in their post-launch road map. Fortunately, the groundwork they'd laid during the game's development meant that, far from getting knocked off course and losing sight of their other update goals, they were able to get a prototype up and running in practically no time at all.

"We spent a lot of time last year building out the tools for the foundation of the game that allow us to do things like this," says Tirado. "Our art director [Spencer Kern] was like, 'I'll just prototype a jetpack'. And so, the thruster from the rocket was scaled down - the art's not final, by the way! - and then we asked how we could add thrust to the player. We hooked it all up and then we had a prototype. Spencer did an amazing job testing it out, and now the actual engineering team is making sure it works in multiplayer and works with existing saves."

They've also been mindful to make sure the jetpack's newfound freedom doesn't change the way players already enjoy the game – a point driven home in my demo by a rather lethal, if happy, accident. You see, as Tirado hurls our space lad off the edge of a cliff into a huge underground biome littered with giant mushrooms sprouting out of the walls, he suddenly realises he didn't equip any oxygen tanks, giving our poor, flailing astronaut about a minute of airtime before he suffocates horribly.

"Wait, I didn't get any oxygen, oh no!" he cries as he hurries back to the safety of his oxygen tether. "This is actually good, though, because this is one of the trade-offs of using the jetpack," he explains. "Adding a jetpack to the game doesn't mean you can just fly around forever now and that it's a flying game. It still means you have to worry about 'Astroneer things'. It's just that you can use the jetpack to augment your movement and your traversal around the world." 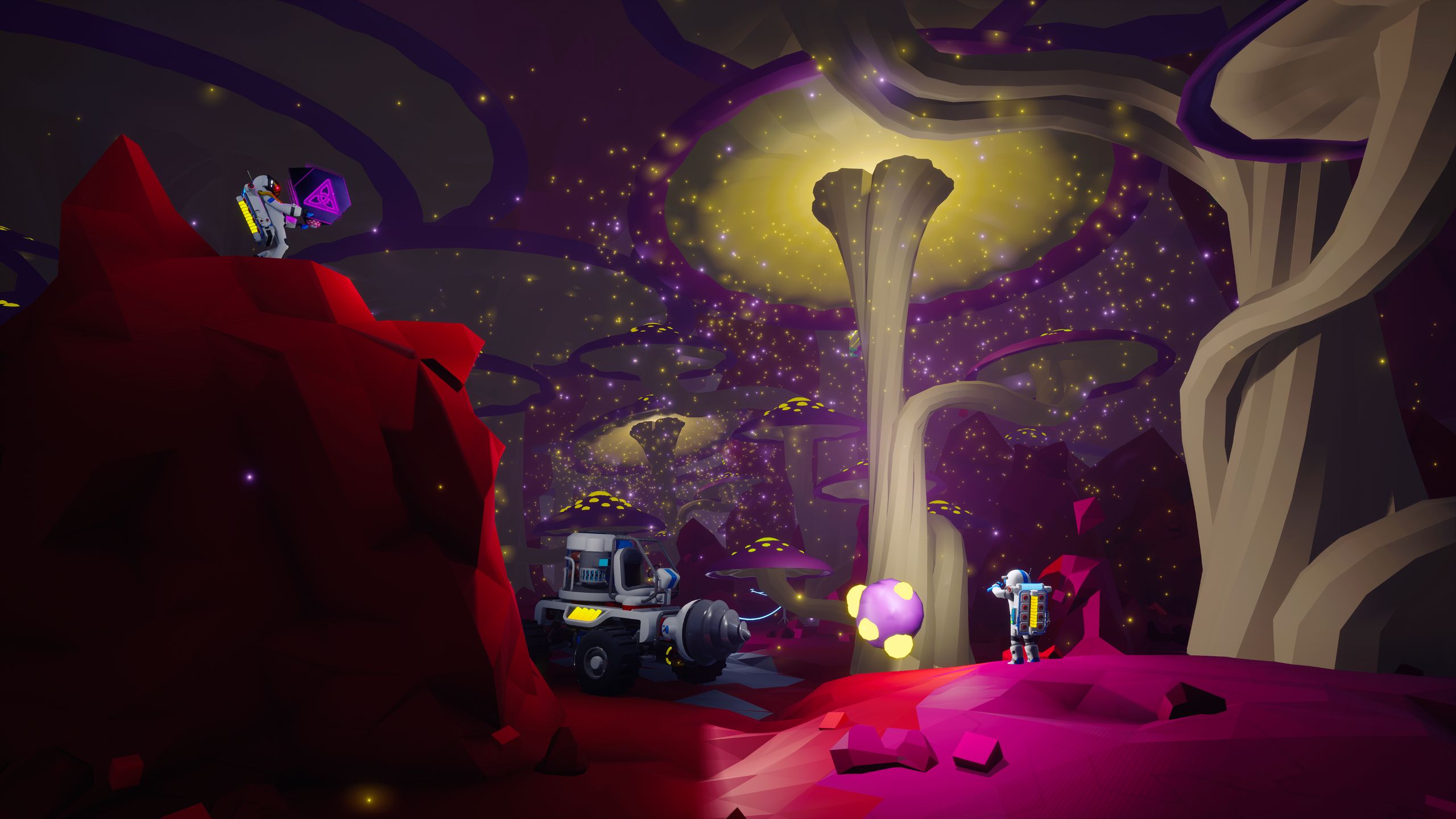 Tirado adds that the team are also looking to include several different types of jetpack as well: "The two main ones we're playing with [at the moment] are an early game version of it, where it's kind of a dirty jetpack that uses rocket fuel and is a little more volatile, and then there's also a later-game version that runs on a cooldown. So it will cost more resources in the later game's crafting progression, but it will run forever with a cooldown after 30 seconds of use, for example."

One thing that will likely change, however, are some of the game's underground areas that currently don't have much to offer in the way of "cool jetpack stuff".

"This planet [in the demo] has this gorgeous mushroom biome," says Tirado. "Normally, you'd just be stuck on the cave floor and wondering what's up there, or build some terrain to get up to these places, but now you can use the jetpack. The reason why we've chosen this one is because it was kind of built for that reason of having a lot of verticality."

That said, he's also expecting Astroneer's existing player base to come up with their own "cool jetpack stuff" that will far exceed anything the team might bring to the table themselves.

"I think we'll probably end up getting more people who actually use terrain to build their own stuff," he explains. "Like they could make courses where you have rings you've got to fly through. We get a lot of that. So not everything was necessarily built with it in mind [from the start], but we're working on the balance of the actual jetpack itself, such as where you get it in the crafting progression and how long it lasts for and making sure it works with Astroneer and doesn't ruin the game." 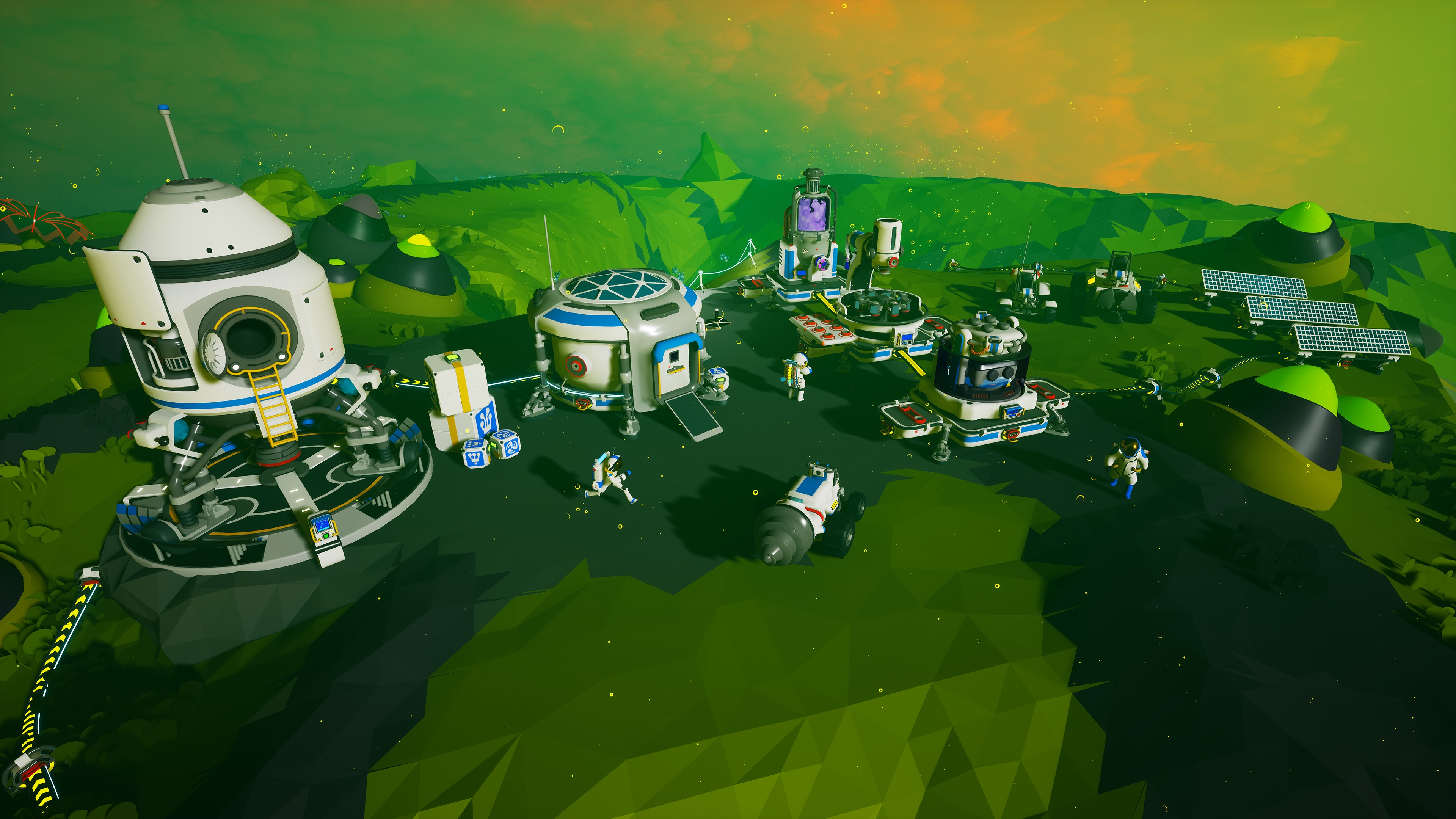 Wherever the jetpack ends up landing in Astroneer, it's clear System Era Softworks don't want it to be just another 'thing' that ends up on your crafting checklist for the sake of it. They want it to be a valuable tool that adds another layer to the world around you, and one that helps you explore the finer mysteries of the planets you've already come to know and love – a task the team has been wrestling with ever since they took the game out of early access in February.

"The biggest piece of feedback we got during early access was 'I've built all this stuff, now what do I do?'" says Tirado. "You can only visit so many planets, and we didn't want to go down the route of just giving you more planets, because that's kind of like an emptier way to do that. We didn't want to say, 'Here's a million planets now, go and visit them all'.

"And so, with the endgame, it was more about tapping into the world of Astroneer in order to make you excited to keep going. That's the direction we're going on. Can we explore the world of Astroneer and what's behind it without necessarily adding another cave or something like that? That's the first update that we're doing - the Wander update. It's a bit more exploration focused, and it's like an actual adventure within the game, separate from the previous endgame stuff. We're having a lot of fun building out the world and seeing where we can push it."

Astroneer is out now on Steam, Humble and the Microsoft Store.