I'd normally balk at the idea of spending over £30 on a mouse. I've never been one for owning flashy gizmos or the latest and greatest, so the thought of forking over more than double that for something like the Asus ROG Gladius II (which currently costs just over £70 in the UK and $95 in the US) would, ordinarily, be positively horrifying.

Thankfully, the ROG Gladius II has more than earned its keep over the last couple of weeks, as it's not only one of the most comfortable mice I've ever used, but it also comes with a load of handy extras to help justify its price, such as a pair of spare Omron switches and two detachable USB cables, one braided and one regular rubber. Is it best gaming mouse material, though? Let's have a gander.

The extra cable will almost certainly come as a relief for hungry cat owners, and the handy lock on the Gladius II's underbelly ensures that neither cable will accidentally get pulled out mid-game, either. The braided cable is also twice as long as the rubber one, giving you a nice bit of flexibility depending on your PC setup. 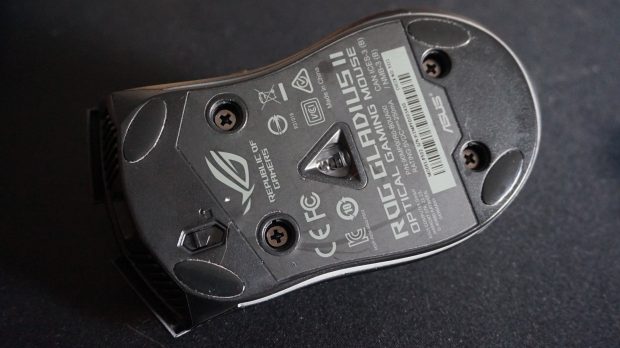 The switches are pretty easy to replace as well. The default ones are guaranteed for a sizable 50 million clicks anyway, but just in case they break or you want a 'different feel' as Asus say on their website, you get two spare ones in the box. You'll need something to prize off the four little rubber screw covers on the bottom of the mouse, but once you've loosened the screws the top just lifts away from the base, giving you easy access to pop out the old switches and stick in the new ones.

It's all very considerate, but the thing that really stuck with me was just how comfortable it was to use on a daily basis. Weighing 110g, it's not particularly heavy, and its lopsided, right-handed design feels like it's been perfectly sculpted to fit my palm. What's more, each of its three side buttons are within perfect reach of my thumb, which is more than can be said for the Corsair Scimitar Pro and HyperX Pulsefire FPS. 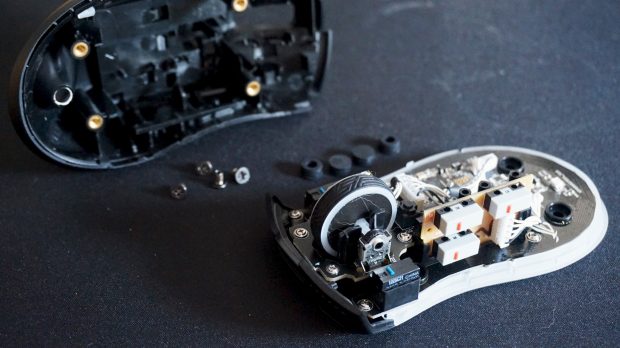 Each button's function can be customised using Asus' Armoury software, but out of the box you get forward and backward clicks for web browsing, and what Asus call a DPI Shift button, which switches to a different DPI or sensitivity setting when it's held down.

There's another button that does this with a single click just below the scroll wheel, but having one right by your thumb is so much more practical when you're playing games, particularly in FPSs. The number of times I've tried reaching for that top button on other mice and missed or lost concentration trying to find it and died as a result are too many to count, so being able to control it at will without even moving my thumb is rather lovely.

As for other button customisations, these range from keyboard functions and media buttons to Windows shortcuts and your own recordable macros, giving you plenty of flexibility to set up your mouse how you like. Armoury gives you space for three different mouse profiles, too, which you can switch between at will by holding down the DPI button below the scroll wheel and clicking one of the side buttons. Armoury is certainly better than other pieces of mouse software I've used in the past, but the less I have to open it, the better.

The ROG Gladius II also supports Asus' Aura Sync feature, which harmonises all your various Asus-branded RGB devices into one, you guessed it, synchronised light show. Once again, Armoury gives you plenty of breathing, cycle, comet and other such RGB options to deck out your mouse with, but I particularly like how you can tone down the brightness of each of its three distinct LED zones, letting you have a dimmer scroll wheel, for instance, than the base and ROG logo.

I didn't feel the need to tinker around too much with the ROG Gladius II's performance settings, but those who like fine-tuning their mouse to the nth degree won't be disappointed. You've got polling rate settings ranging between 125-1000Hz, button response times going from 4ms up to 32ms, plus acceleration and deceleration options and angle snapping. 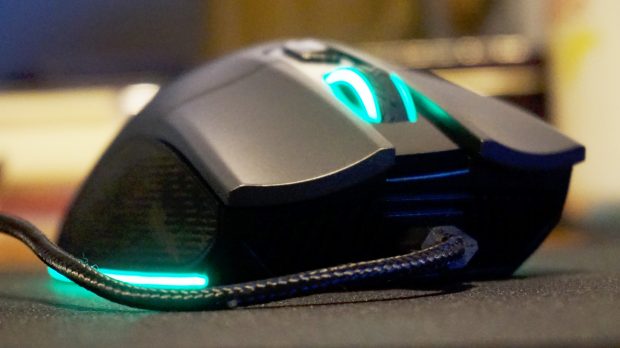 It's a shame you get just two DPI settings on the ROG Gladius II, but when its range extends from a crawling 100 DPI all the way up to a frankly ludicrous, faster than light 12,000 DPI, you've certainly got plenty of scope to find something to suit your tastes, especially when each one can be adjusted in increments of 100. Personally, I found their default positions of 400 and 1600 DPI to be just fine for everyday use, so I left them as they were.

All in all, I think I'd be quite happy paying a bit more for the Asus ROG Gladius II. Its sensible buttons, comfy grip and tasteful RGB options make it a pleasure to use, and its bundled extras give it more versatility than its slightly cheaper rivals. Yes, extra Omron switches (D2F and D2FC are the ones you want in this case) can be found for mere pennies on various component websites elsewhere, but sometimes it's just nice to have them in the box already. If you're in the market for a new mouse and want something that will stay the course, the ROG Gladius II comes highly recommended.