When AMD said they were going to get serious about sticking more of their 3rd Gen Ryzen 3000 H mobile CPU chips into proper gaming laptops this year, they really weren't kidding. Take the Asus ROG Zephyrus G, the ever so slightly fatter cousin of the ultra slim Asus ROG Zephyrus S I reviewed earlier in the year. It's not an outright AMD machine - it's still got one of Nvidia's new GTX 1660 Ti Max-Q graphics chips inside it, after all - but its processor is AMD's top-end Ryzen 7 3750H, a quad-core, eight-thread CPU that has a base clock speed of 2.3GHz and a max boost clock speed of 4.0GHz. Does it really have what it takes to take on Intel's incumbent Core i7-8750H, though? Here's wot I think.

In short, Intel's got nothing to worry about here, as the Ryzen 7 3750H trailed quite a long way behind its Intel rival when I put it through the Geekbench 4 benchmark. Finishing with single core and multicore scores of 3589 and 12,480 respectively, it's around 24% slower on the single core front, and 48% slower on the multicore front. In some ways, that's not exactly surprising when Intel's chip has six cores and twelve threads to its name, but it's still not exactly the most impressive set of results given its AMD's top new mobile chip.

The Zephyrus G is, admittedly, not quite as powerful as the Helios 500. As we'll see in a minute, its GTX 1660 Ti graphics chip isn't nearly as quick as AMD's Vega 56 chip, for example. But compared to other laptops around the £1000 / $1000 mark, the Zephyrus G does actually come off quite well. 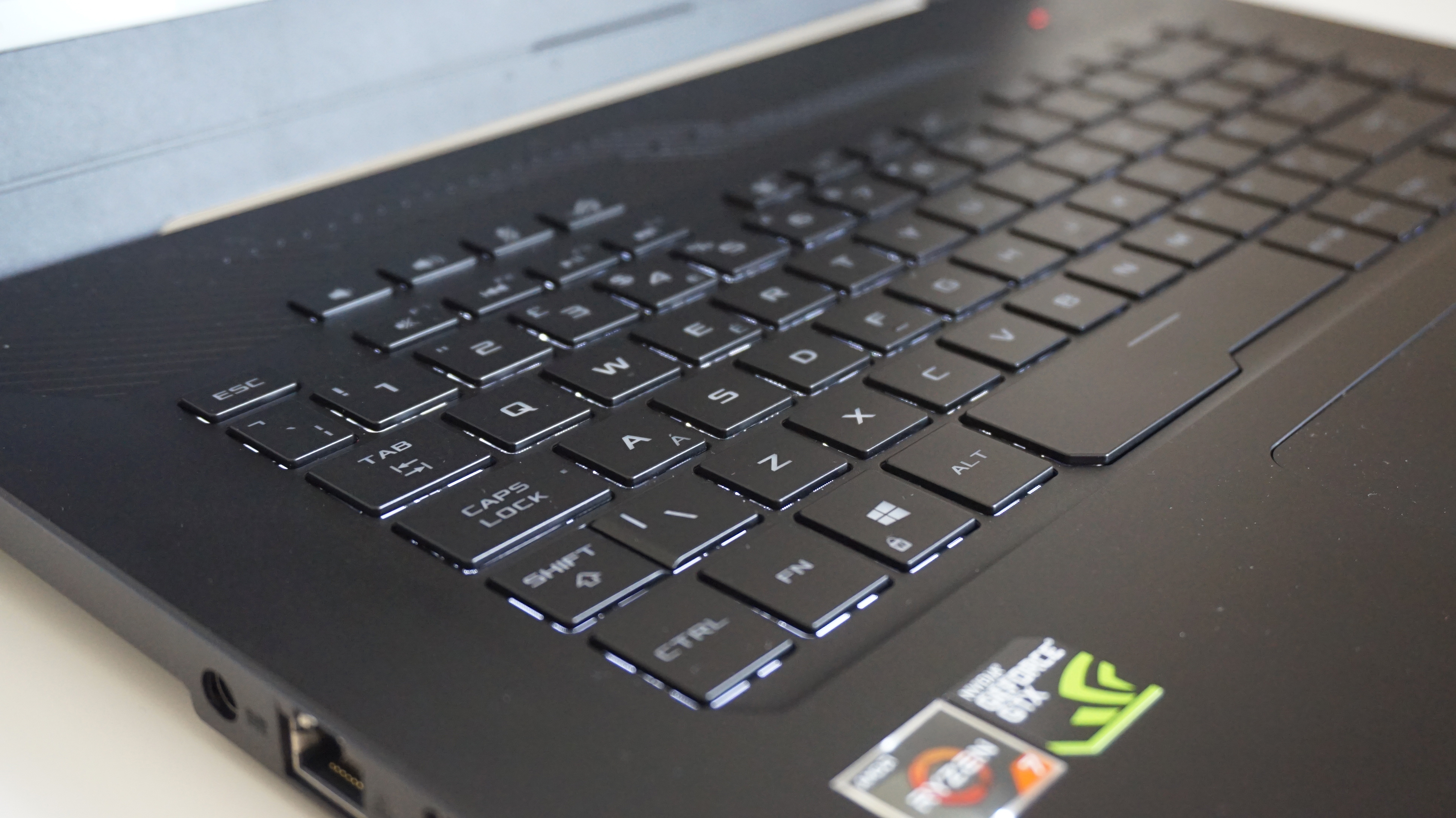 Most Intel machines in this price range only come with a Core i5-8300H CPU, for example, which the Ryzen 7 3750H beats quite comfortably in Geekbench 4 (coming in around 9% faster on single core tasks, and 25% faster on multicore based on the results I obtained from the 8300H-equipped Dell Inspiron G5 15 I tested last year), and a quick scan of retailers like Currys and Ebuyer reveal that most also only come with 8GB of RAM and, at best, a 256GB SSD and 1TB HDD combo. As for graphics, you're only looking at either 4GB GTX 1050 or GTX 1650 chips, too.

The Asus ROG Zephyrus S, then, looks like quite the pick of the bunch on paper, especially when it comes with a lovely 120Hz IPS display, too. However, there are definitely still some quite big compromises you're making here, and some I'm not too sure I'd really be happy with if I'd bought the laptop myself.

That 15.6in, 1920x1080, 120Hz IPS display I just mentioned, for example, leaves quite a lot to be desired in the colour accuracy department. It looks just about all right in the flesh, but colours are a little washed out in places, and games and photos don't look particularly vivid. That's because it's only actually covering 57.8% of the sRGB colour gamut, according to my i1 DisplayPro colour calibrator, which is pretty poor considering how much it costs. Most other gaming laptop screens I've tested cover around 85% by comparison, so I was a bit disappointed the Zephyrus G wasn't better. 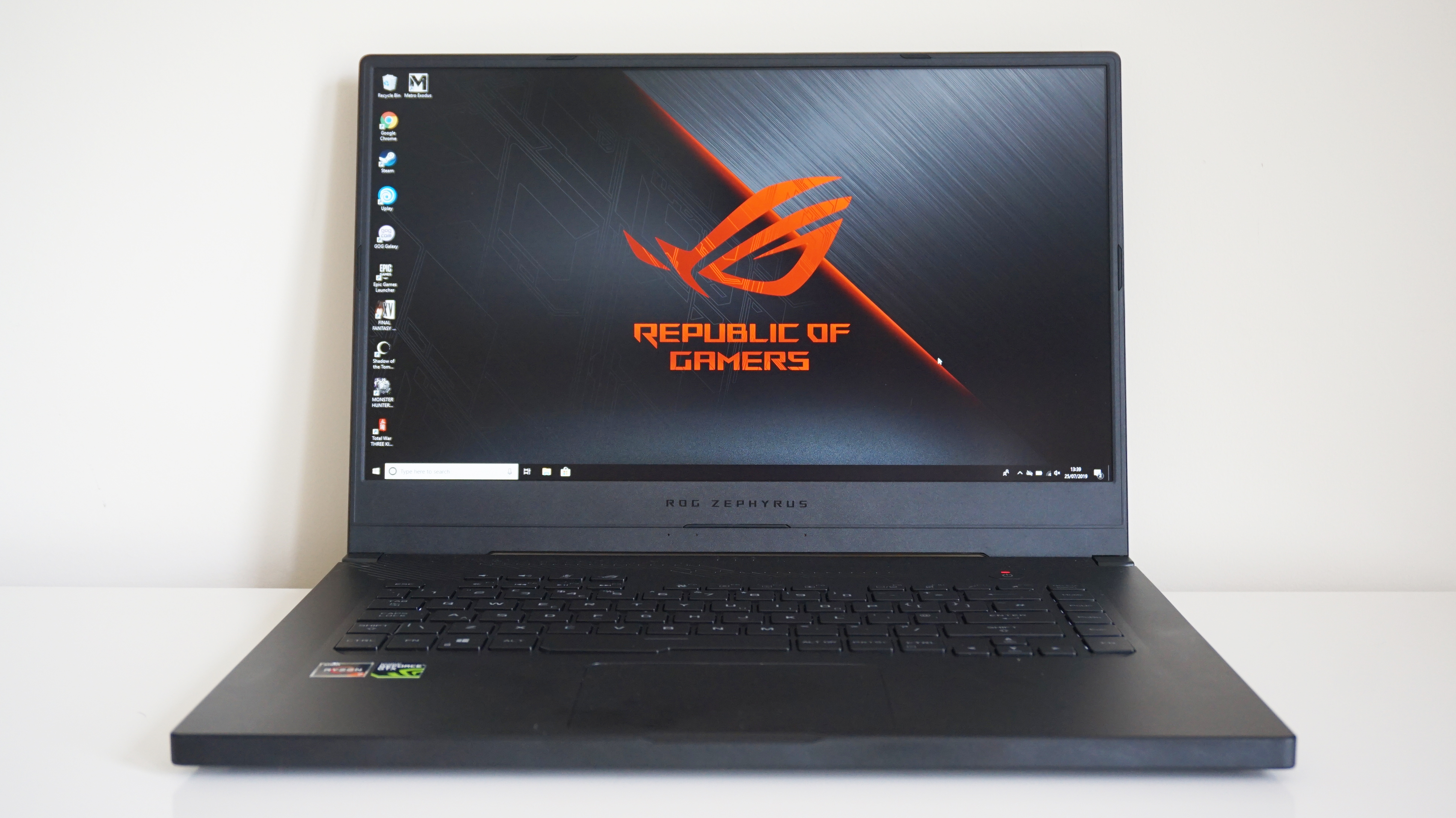 As for its gaming chops, the energy-efficient Max-Q model of Nvidia's GTX 1660 Ti graphics chip isn't nearly as nippy as its desktop counterpart here - although I do wonder whether the Zephyrus G's thin (and very hot) chassis might be throttling some of its performance. Regardless, this is very much a 1080p Medium quality settings kind of gaming laptop, and that's just getting it to hit a consistent 60fps as well. If you're after the full 120fps offered by its high refresh rate screen, you're either going to have to lower the quality settings right down as far as they can go, or drop the resolution down - at least when it comes to playing today's top games, anyway. 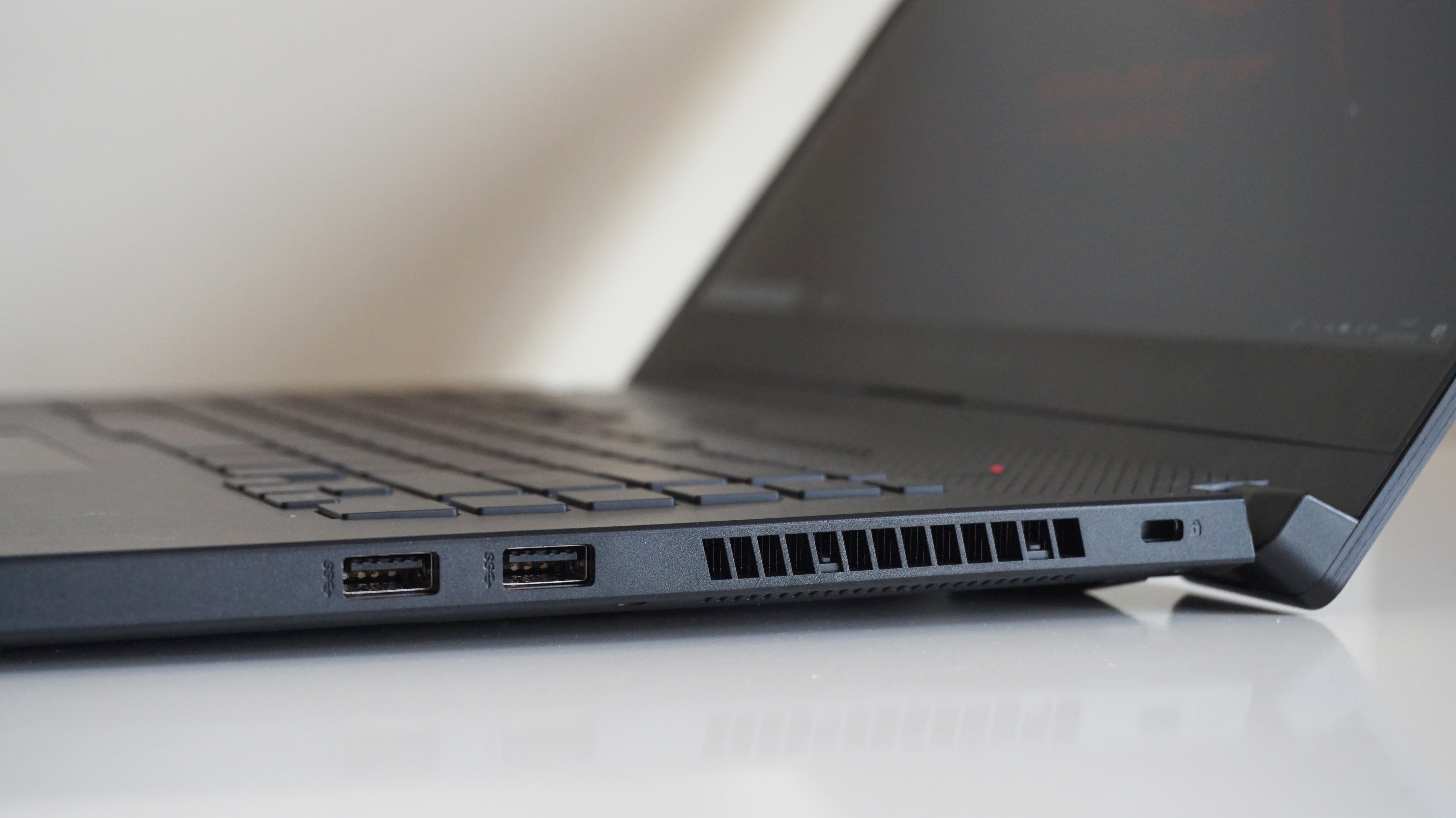 Tougher games, however, very much hit their limit at the Medium end of the quality spectrum. In Monster Hunter: World, for example, I just about managed an average of 50fps on Mid at 1080p, while Assassin's Creed Odyssey (whose mysterious performance bug seems to have been fixed now) averaged just 42fps on Medium.

Total War: Three Kingdoms had a slightly better time, finishing its internal benchmark with an average of 70fps on Medium and a still very playable 51fps on High, while Shadow of the Tomb Raider only showed a 7fps difference between its Highest quality settings (51fps) and Medium (58fps).

Even Metro Exodus managed 58fps on Medium at 1080p, while High was just about playable at 44fps. The same goes for Final Fantasy XV. On Average, it was able to hit a smooth 55fps average with all of Nvidia's extra effects turned off, and around 50fps with TurfEffects and HairWorks turned on. Pushing it up to High started to stretch things a bit, but I still saw a playable average of 52fps sans extra Nvidia effects, and 39fps once I'd turned HairWorks and TurfEffects back on. 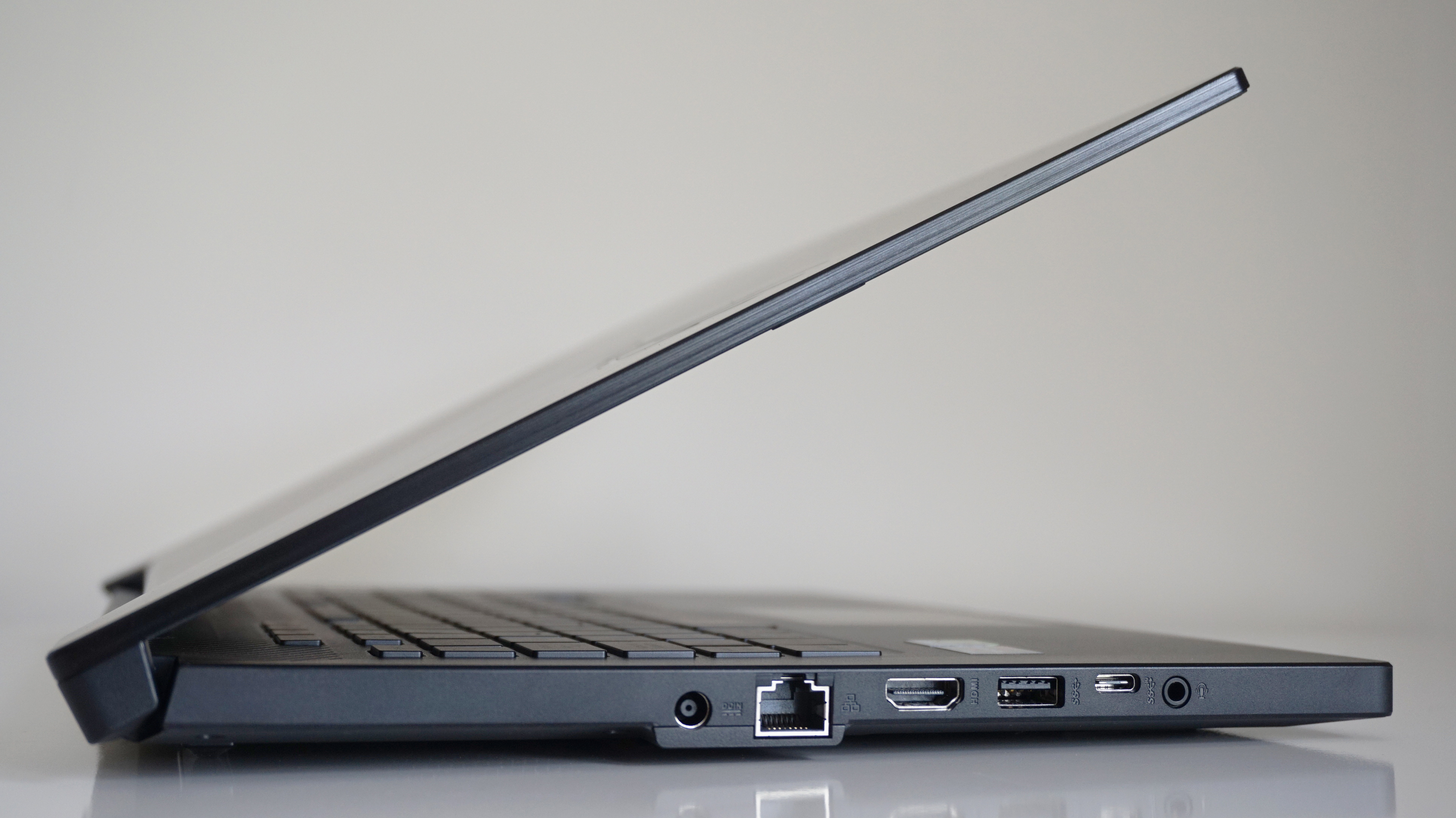 Either way, though, while its gaming ability is almost certainly a million times better than what you'd get on similarly priced laptops with Nvidia's even weedier GTX 1650 and GTX 1050 chips inside them, it still feels like you should be getting more for your money here. After all, a grand is hardly pocket change, and I'd ideally want it to be able to do a lot more than just Medium 1080p.

As I mentioned before, though, it does get exceedingly hot at times, with basically the entire right half of the keyboard becoming painful to the touch under load. Granted, you're not really going to be using most of those keys for gaming (the WASD keys are mercifully just warm, rather than SWEET LORD, THAT BURNS kind of temperatures), but it's still not exactly ideal, either.

And man alive, those fans. Like any thin gaming laptop, the Zephyrus G sounds like it's about to launch into orbit whenever it's doing anything more than browsing the internet, so you're almost certainly going to have to wear a pair of headphones to play games with it just to hear what's going on above the din. 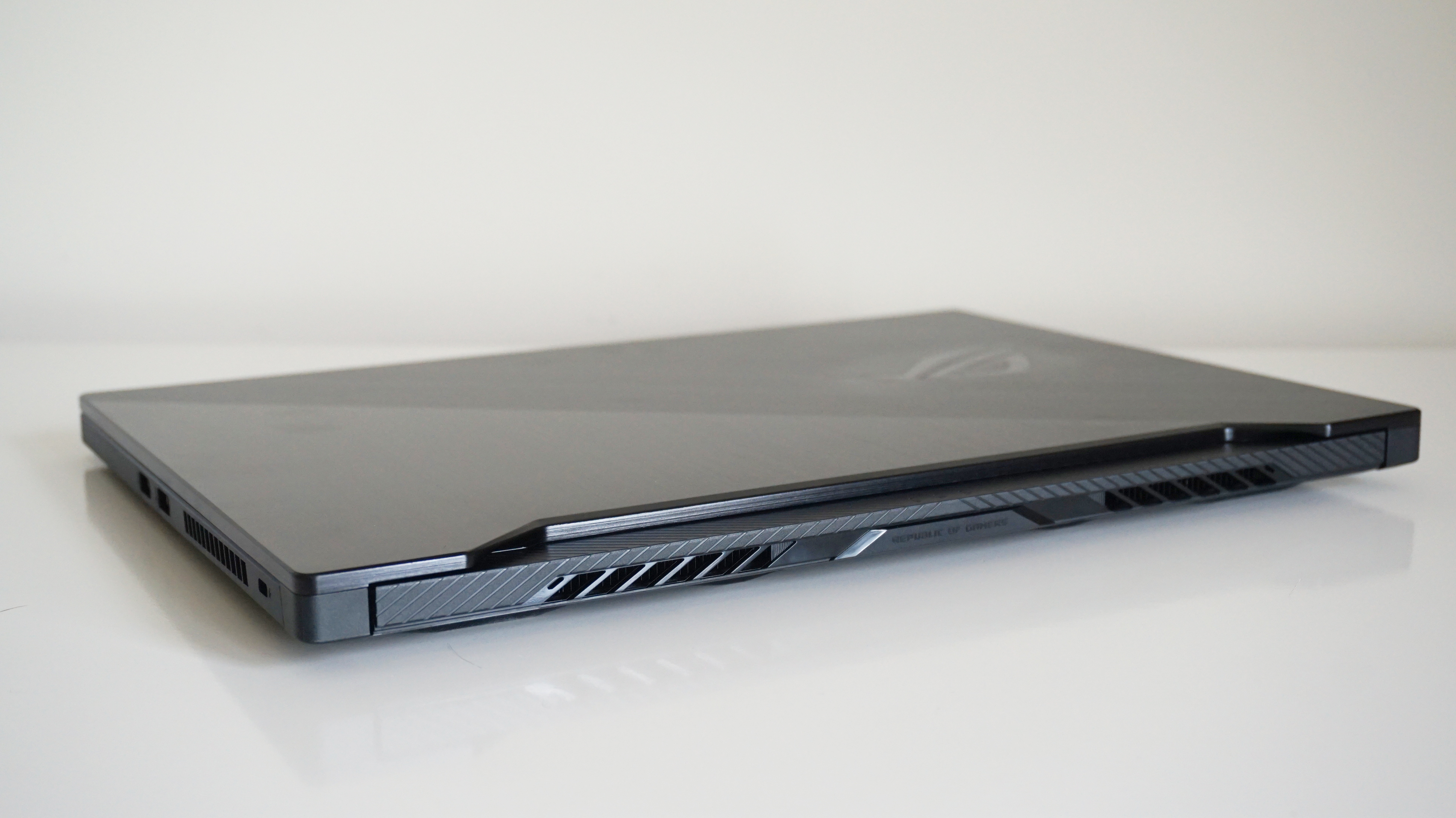 The keyboard took a bit of getting used to as well. Not only are its low-profile keys all pretty close together, but the lack of spacing and definition between each one meant I was quite often hitting the incorrect keys while typing at speed. I'm sure I'd probably become more familiar with it over time, but even now after several weeks use I still find it a bit of a pain to type on.

Overall, then, the Asus ROG Zephyrus G is probably one of the better gaming laptops you can find at this sort of price, but it's still far from being ideal. It's a decent shout if you're not fussed about playing games at higher quality settings and want something that's thin and reasonably light, but I can also see the heat and noise from its fans becoming more of an annoyance as the years wear on. It's the best of a bad bunch, as they say, so if you can afford to spend a little bit more, such as on the considerably more powerful £1449 / $1699 Asus ROG Strix Scar II, I'd definitely recommend doing so.