If you've ever had to lug your laptop around all day, you'll know the importance of having one that's thin, light and doesn't kill your shoulders after spending eight to ten hours in a backpack. I certainly do, and let me tell you, hauling around anything over 2kg for 8-10 hours everyday is absolute murder on the old spine.

At 2.1kg, the Asus ROG Zephyrus S sits just on the border of that weight limit for me, but man alive is it thin. Measuring just 16.15mm at its thickest point (and 15.35mm at its smallest), this ultra slim metal slab has a minuscule footprint compared to other 15.6in gaming laptops out there, and it's properly powerful too. Packed with an Intel Core i7-8750H processor, 16GB of RAM and up to an Nvidia GeForce RTX 2080 Max-Q graphics chip, the Zephyrus S isn't messing about. It does, of course, also cost a small fortune.

I was sent the middle sibling in the Asus ROG Zephyrus S GX531GW family, which has an RTX 2070 Max Q chip inside it, but even this model will set you back an eye-watering £2290 in the UK and $2000 in the US. That's quite the premium over its 26mm but identically specced cousin, the Asus ROG Strix Scar II (which can currently be had for £1905 / $1879), so a large part of the Zephyrus S' appeal will ultimately come down to how much you want that teeny tiny chassis.

It is quite the thing to look at in the flesh. Despite its diminutive dimensions, it feels sturdy and solid when you pick it up, and I'm also very fond of the small lip on the lid. This lets you lift the Zephyrus S' screen with just a single hand. None of this prying it open with your fingernails malarkey and holding it down to make sure the base stays on the table. Just one swift motion that screams, "I'm PREMIUM, peasant!" 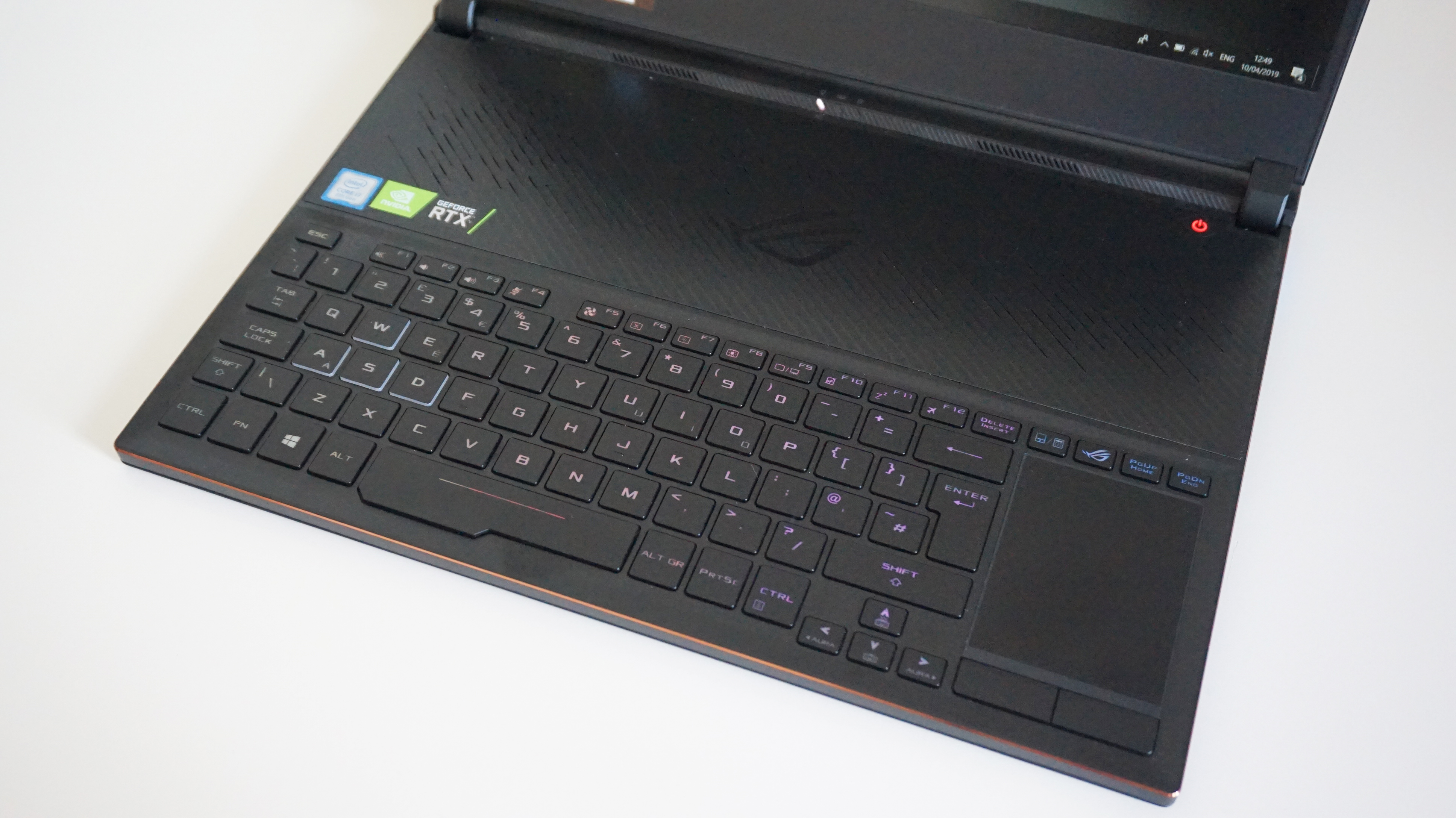 The keyboard does, admittedly, take some getting used to, having been shunted down to the bottom of the laptop to make room for its large, chassis-wide heat pipes and cooling gubbins, but I quickly got used to it. On a desk, anyway. It's considerably less practical when you're stuck trying to use it on a plane or train table, for example, when your hands are often hanging off the edge at the best of times even on a more traditional-style laptop. In these situations, it can all start to feel a bit cramped, so if you happen to spend most of your time being jostled around in speeding metal tubes, the Zephyrus S probably isn't the laptop for you.

Still, at least the RGB-backlit keys are lovely to type on when you do have a bit more room to rest your hands on the table, with all of them providing a very pleasing amount of travel and tactile feedback regardless of whether I was gaming or typing up long documents. I also quite liked having the touch pad (which also doubles up as a number pad) over on the right of the laptop. It's not the largest thing in the world, but having it that much closer to my hand just made it feel a bit more natural to use when I was short on desk space.

And the screen. What a beaut. Not only is its 1920x1080 IPS panel lovely and bright, peaking at 305cd/m2, but its colour accuracy also covers an impressive 90% of the sRGB colour gamut. Sure, that's still a bit low compared to a proper IPS monitor (where I'd normally expect to see around 96% coverage), but compared to other laptops, it's pretty good. Indeed, even the Scar II only covers 85% of the sRGB colour gamut, as does the Alienware m15 and HP Omen X 17. I also recorded a nice, low black level of 0.28cd/m2 (the closer to 0.00cd/m2, the better), and a decent contrast ratio of 1084:1, ensuring there was plenty of shadow detail to be seen in darker games, videos and photos. 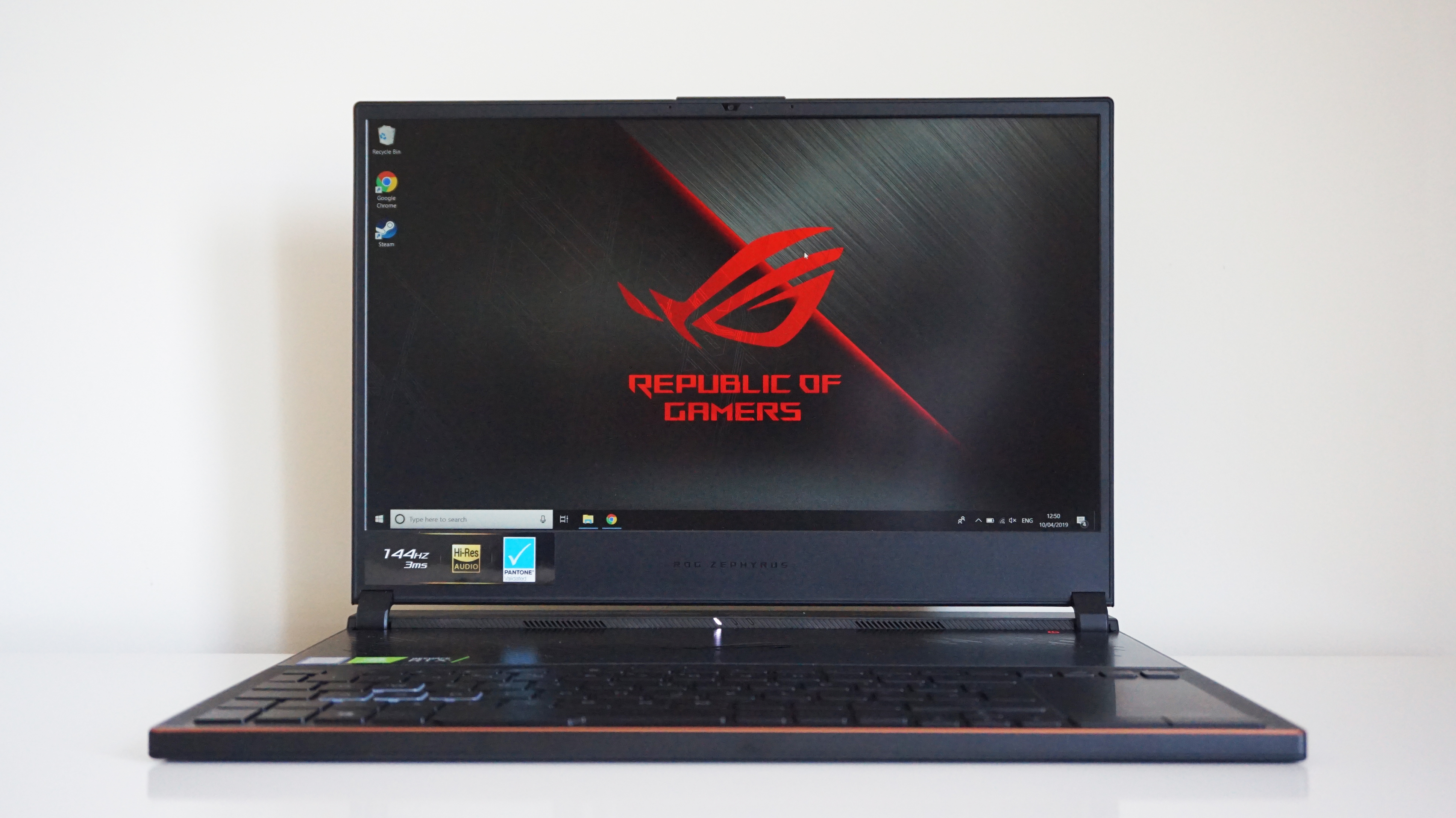 You may have noticed it's also got a Pantone Validated blue tick sticker on it. This isn't quite as important as it sounds, as it simply means the laptop's been verified by the colour science boffins at Pantone to say it's better than other laptops at showing Pantone's own specific colour system, which is used by professional designers and the like across the world. It's not a proper gamut like the sRGB standard, and it doesn't mean it can do anything like HDR either. It's just very good at showing Pantone's "Matching System Colours".

That's great if you need a laptop for doing proper design-y things like photo-editing, but it's not automatically going to make your games look any better unless they too have been graded according to Pantone's matching system. Don't get me wrong - the screen still looks brilliant in the flesh, offering rich and vibrant colours that pop out of the screen at full brightness, but I wouldn't get too caught up finding one that's Pantone approved versus one that isn't.

The bigger question is whether the energy efficient Max-Q version of its Nvidia GeForce RTX 2070 chip makes it a decent gaming machine - especially when the Scar II had a full-fat one under its belt. The answer to that lies, once again, in how much you want that preposterously thin chassis, as there's a definite drop-off in performance compared to its chunkier cousin.

For the most part, you're still looking at a minimum of 60fps on max settings across almost every big blockbuster going these days, which would be fine if the Zephyrus S had a 60Hz refresh rate. However, much like the Scar II, this screen can go all the way up to 144Hz, and when you're paying north of two grand for the privilege, you'd jolly well hope it could make full use of all those extra frames.

On max settings, however, it's going to be a pretty tall order for a lot of current games, as even the well-optimised Forza Horizon 4 only reached an average of 86fps on Ultra quality at 1920x1080, which is a full 15fps behind what the Scar II managed on the same settings. Elsewhere, the gap was closer to 10fps, but I'd argue that's still a sizable drop considering how much more you're having to pay for it.

In The Witcher III, for example, the Zephyrus S managed between 65-91fps on Ultra settings, whereas the Scar II went from 68-98fps. It was a similar picture over in Monster Hunter: World, too, with the Zephyrus S ranging between 53-72fps out in the Ancient Forest on its Highest quality preset compared to the Scar II's 55-82fps. 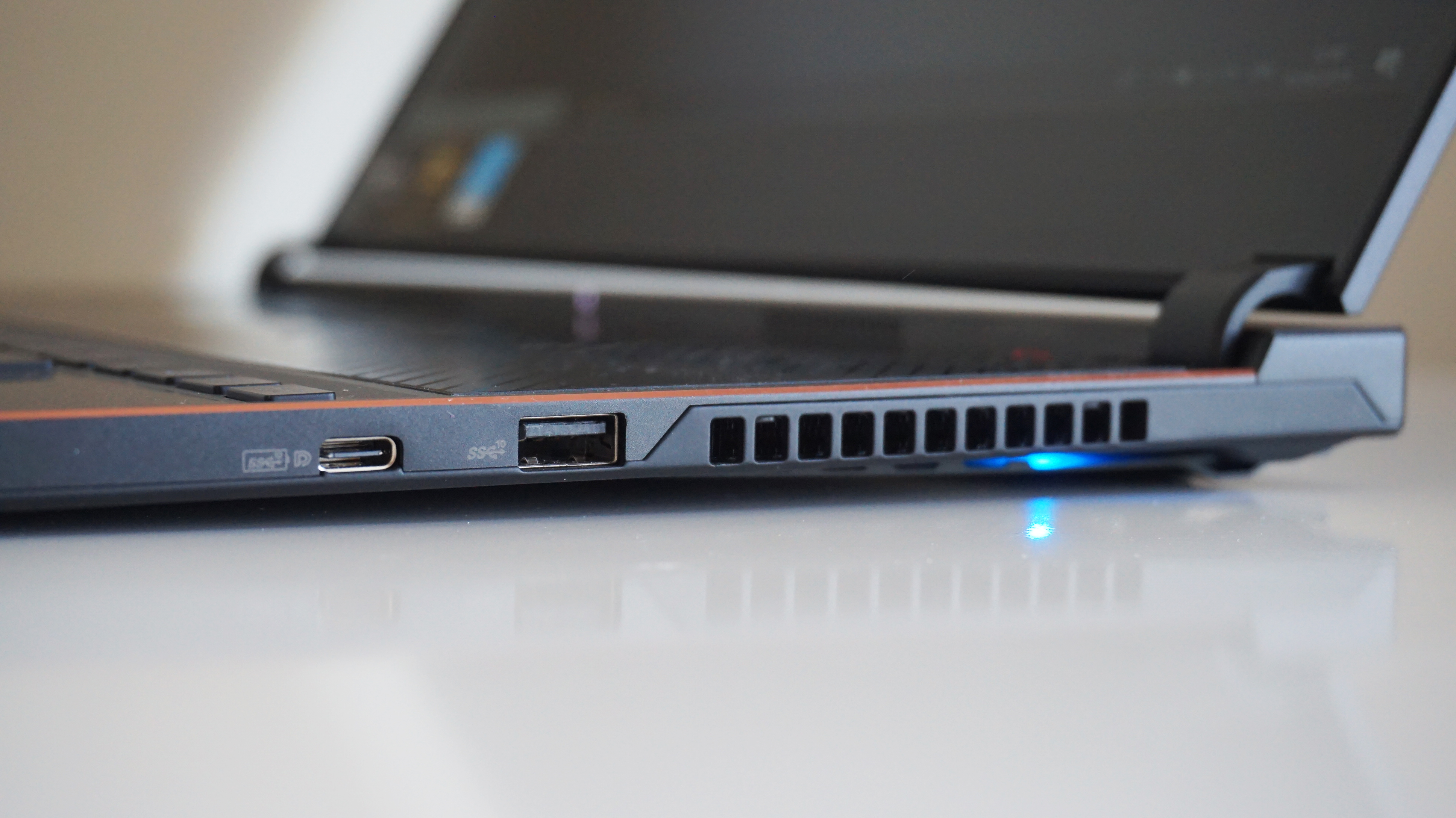 In its defence, at least you're not getting a worse deal at the other end of the frame rate scale with the Zephyrus S. After all, 53fps is going to look and feel a lot like 58fps when the action does get a bit hectic onscreen, and the same goes for the difference between 65 / 68fps, too. It's just those highs the Zephyrus S can't quite catch.

The same thing happened with Shadow of the Tomb Raider, too. While 55-64fps in the busy town square of Cozumel is perfectly smooth and playable on the Zephyrus S, it's still not quite as tasty as 59-72fps on the Scar II. And if further proof was needed, I'd much rather be gallivanting around Final Fantasy XV at 66-77fps with all of Nvidia's fancy effects turned off on the Scar II than 59-65fps on the Zephyrus.

Indeed, the only game in my benchmarking suite where the Zephyrus S didn't fall massively behind the Scar II was Total War: Warhammer II, where its average of 59fps on Ultra settings was indistinguishable from the Scar II's average of 62fps. 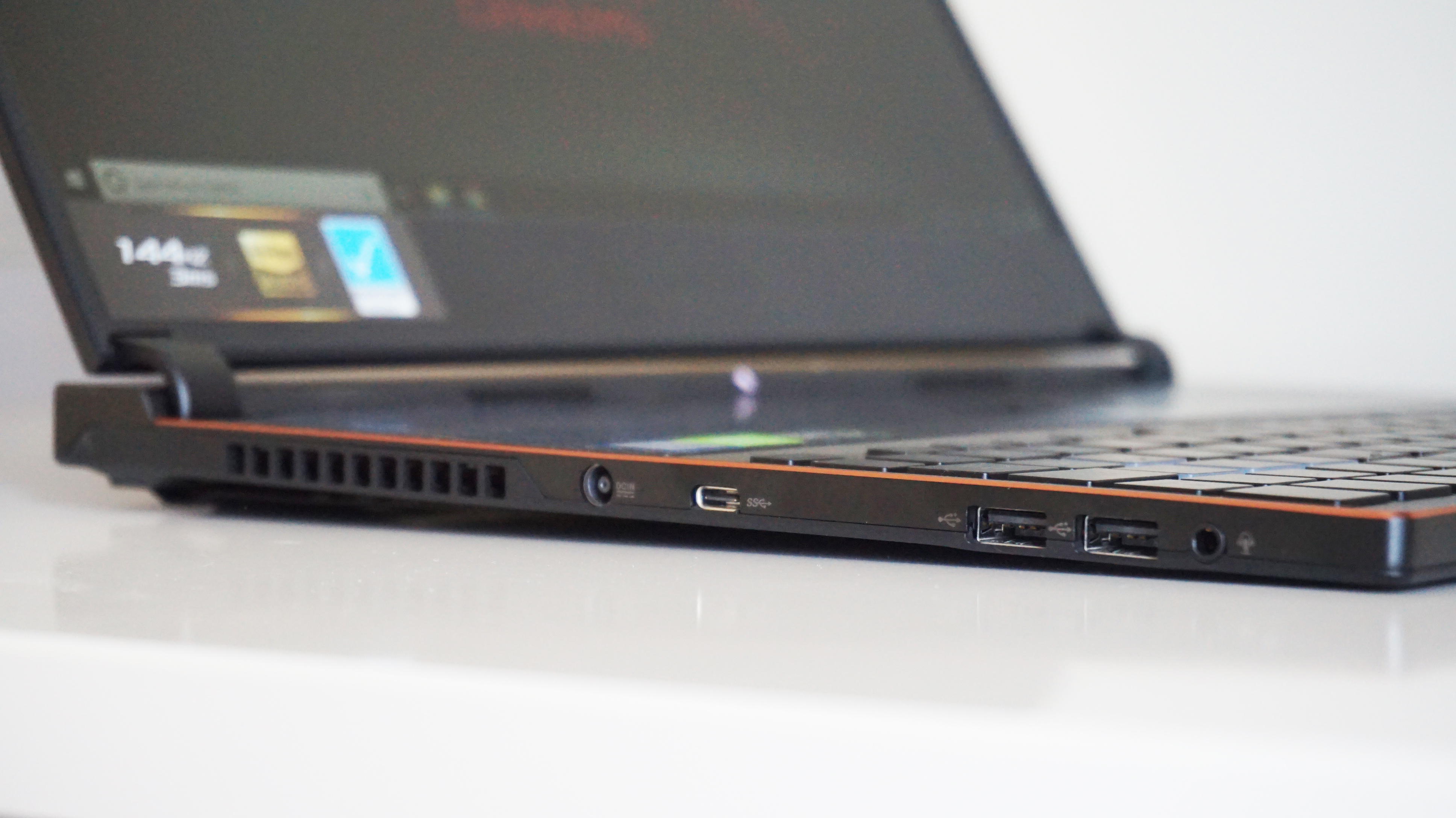 I've excluded Assassin's Creed Odyssey from this review, as I've since been informed that the frame rate stutter I've encountered in other laptop tests is, in fact, a bug in the game and nothing to do with the laptop. It's in the process of being fixed, but until then the game won't be appearing as part of my laptop benchmarking results. Read more here.

Still, that doesn't really scream good value for money to me, and it's not just the Zephyrus S' graphics chip that suffers from its skinnier innards, either. Its Intel Core i7-8750H processor also returned slower results when I ran it through Geekbench 4 as well, hitting 4739 in the single core test and 20212 in the multicore test compared to the Scar II's combo of 4931 and 22220.

There's always going to be a bit of variation in this test, of course, but for comparison's sake, the i7-8750H in the Alienware m15 was also much closer to the Scar II, coming in with 4905 and 22466. You probably won't notice that difference in everyday use, to be honest, but it's still going to be sitting there, niggling and gnawing in the back of your mind that you're probably not getting as good an experience as something else that's quite a bit cheaper.

And that's my main problem with the Zephyrus S. While it's definitely the one I'd prefer to have in my backpack (if only for the sake of my poor, mangled shoulders), it's nowhere near as good value for money as the £1905 / $1879 Asus ROG Strix Scar II. Sure, I'd probably hate myself a bit for making myself carry a 26mm thick, 2.4kg laptop around all day every couple of months, but I'd probably hate myself even more for spending almost another £300 on something whose performance is objectively worse. Some of you might be willing to make that trade-off, but for me, the Scar II is still my RTX 2070 laptop of choice.