For a series built around the deconstruction of Aryan bodies, it’s taken a long time for players to take the hint that Wolfenstein’s ubermensch William Blazkowicz is Jewish.

That hesitation betrays our definitions of Jewish identity as old-fashioned, and also reflects that the few prominent Jewish characters in games play into and reinforce stereotypes. While Blazkowicz is the most high profile character to break the mold, what does it say about games that the most diverse representation of a Jew we’ve seen is simply whiter than most?

To me, and every other Jewish gamer I knew, there was always more belief than not that Blazkowicz was one of us. Canonically it always made sense for a commando to hide his Jewish heritage from the Nazis -- passing for a gentile, or in gaming terms “optional stealth,” has always been a Jew’s first line of defense.

Since Blazkowicz’s very Jewish sounding name and fervent antifascism weren’t enough to make it clear, MachineGames further loaded him up with Jewish signifiers in 2012’s reboot, The New Order, first and foremost by casting Jewish actor Brian Bloom as the voice of Blazkowicz. (Bloom’s first screen role was as a young Yiddish hood in Sergio Leone’s 1984 Jewish-American crime epic Once Upon a Time in America).

Fulfilling other Jewish-American stereotypes, Blazkowicz acknowledges he can read but not understand Hebrew and falls for a shikse. If that weren’t enough, Blazkowicz is sent to a concentration camp where he is declared the biblical judge Samson -- literally an emergency military leader of the Jews -- by the Yiddish wizard of Lodz. It was enough for some, but still not everyone.

This evidence was seemingly considered circumstantial, and didn’t offer the genetic proof that informs Western definitions of race. B.J. just looks too white to be of the “Jewish race.” European-descendant Jews, that is to say primarily the Ashkenazim, achieved whiteness in America in the 1960s alongside the Irish, Mediterraneans and Slavs. Jewish whiteness is typically only challenged by fascists, or when guilt-ridden Jews awkwardly try to shed it to relate to oppressed racial minorities. Compared to people of color, popular culture tells us Jews are white -- but they certainly can’t be Aryan, the whitest of whites.

This fealty to the Nazi racial codes of the Nuremberg Laws is one of the two ultraconservative interpretations of Jewish identity that have wormed their way into the mainstream as our go-to definitions. The other is courtesy of Halakhic law, which states one must have a Jewish mother to be a Jew oneself, in a gross attempt to preserve a blue blood purity not dissimilar to white supremacist desires.

MachineGames denied us deeper discussions of this definition, however. When they decided to quash the rumors once and for all by explicitly stating Blazko is canonically Jewish - whatever that means - they did so by revealing his mother is Jewish in The New Colossus’ prologue, deferring to the definition most likely to sway non-believers. And it worked.

While the developers should be commended for providing perhaps the only positive Jewish role model in gaming, their decision to dissolve the "ambiguity" of his Jewishness through racial laws was a cop out to definitions we should outgrow. Would we still consider Blazkowicz Jewish had his mother converted from Catholicism? What if she were a gentile and his father a Jew? Would Set Roth’s opinion sway us? Or Hitler’s? Who does the Wolfenstein franchise define as canonically Jewish?

Before the developers answered the Blackowicz question with Halakhic law, the main challenge to B.J.’s heritage was his perfect white body. Blonde Hitler Youth hair, blue eyes, square jaw, subtle Texas drawl (ace acting Bloom), and hulking physique aren’t just incompatible with Jewish stereotypes, they’re antithetically Aryan. Combine that with an all-American (read: not-Jewish) heartland upbringing and Blazko seems every bit the Nazi superman ideal deconstructed to ironically bash the Reich. The term “Aryan Jew” is problematic, we reflexively reject it, and so we reflexively reject the blonde-haired Blazkowicz as a Jew. But the cat’s out of the bag, and our definitions need to change.

The subversive inversion of the white dudebro ubermensch power fantasy in Wolfenstein works because of Blazkowicz’s Jewishness, not in absence of it. He embodies something our racist definitions refuse as an enigma, both ubermensch and untermensch, though firmly in the camp of the drowned and the saved.

How did we get stuck with these racist definitions? All stereotypes are based in some historical curio then twisted into abomination, but they don’t propagate if challenged with more diverse representation.

Videogame casts are more diverse than ever, but characters themselves are often stereotypical or superficial. This is as true of Jewish characters as any other. Interesting stories are being told, but they’re all in the same stereotypical vein. We’ve seen nuanced examples of the Ashkenazi-American experience, but that’s about it.

The only game that really hangs its hat on obvious Jewish themes is indie adventure game developer Wadjet Eye Games’ 2006 breakout premier, The Shivah. By Jewish developer Dave Gilbert’s admission, the game, like its creator, isn’t particularly religious, despite starring a rabbi called Russell Stone. It is however very much about Jewish identity, with the drama unfolding as a result of the protagonist kicking out a member of his congregation, Jack Lauder, for asking him to officiate his marriage to a non-Jewish woman.

“Nothing is worse than when Jews turn their backs on one another,” Stone tells Lauder, demonstrating his Halakhic definition of Judaism. He views Lauder as a race traitor for marrying an Indian goy, who he believes is genetically incapable of raising a Jewish household.

The rabbinical protagonist himself doesn’t fit the stereotype well. To the unordained, Russell Stone doesn’t sound like a rabbi’s name, and his voice doesn’t sound right either, especially in comparison to his nemesis, the rich and powerful Rabbi Amos Zelig. (As if to underline the insignificance of names, Stone is voiced by Abe Goldfarb and Zelig by Joe Rodriguez).

Stone sees rejecting interfaith marriage as a preservation of the Jewish people, despite this lack of “concessions” as Rabbi Zelig puts it, driving the Lauders from his congregation and to their doom in Zelig’s welcoming arms. 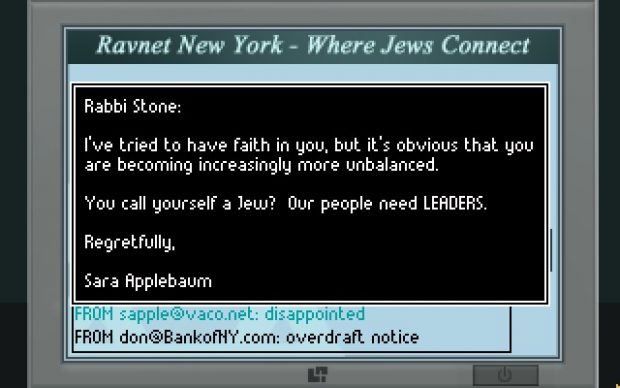 When one rabbi and then another betray him years apart, Lauder challenges them both with the same indictment: “You call yourself a Jew?” Lauder’s Jewish identity isn’t based on Talmudic dogma or mother’s blood, but the moral underpinnings the religion aspires to. That’s a far nobler definition than the racial science of popular culture.

A month after The Shivah’s premier, a game trailer debuted showing a man in an underwater city trying to kill a little girl with a wrench before taking a drill to the gut. Nothing in Bioshock’s marketing would suggest the 2007 game would feature the most ambitious Jewish cast in gaming history. And on release, no one seemed to notice nearly every main character in the game was Jewish, perhaps enraptured instead by the game’s unique setting and commentary on player agency.

It wasn’t until 2015 that Bioshock’s top-billed developer and writer Ken Levine articulated to games journalist and fellow Jew, Michael Futter, what exactly makes the Jews of Rapture so plausible.

Levine is from one of America’s great historic Jewish neighborhoods, Flushing, Queens, and his Jewish characters reflect a lived experience. I don’t know if you could describe a game as grimly fantastical as Bioshock as being in the social realist tradition, but all of Levine’s characters are believable products of their environments.

Andrew Ryan’s Rapture and its foundational “Great Chain” Objectivist ideology aren’t merely reactions of an American individualist against what he saw as the “parasites” of FDR’s New Deal, but the internalizations of a terrified bourgeois shtetl Jew of the Pale who survived Tsarist and Soviet pogroms. It is no accident the early life of Ryan mimics that of his anagrammatical and philosophical inspiration, Ayn Rand.

Bioshock’s other Jews are similarly products of Jewish identity, and even rejections of it. The gruesome Little Sister experiments of Ryan’s foil and fellow Belarusian Jew, Brigid Tenenbaum, are narratively justified by her time as the wunderkinder of Auschwitz’s Dr. Mengele, and Levine suggests avant garde plastic surgeon Dr. Steinman’s aesthetic ideals would be spurned by surface Jews’ reverence for the body as a temple.

“Tenenbaum’s a Jew. Tenenbaum’s a highly functioning autistic. Those are instrumental in getting her to that place, but a different autistic Jew wouldn’t have ended up there, because there is something about her and what she wants – her absolute adoration of science – to the point where she fails to see every other thing,” Levine told Sutter.

As comparatively grounded as Bioshock’s Jews are, they’re still of the archetypal white variety, and comfortably fit within the diasporic stereotypes constituting most people’s definitions of Jews: Eastern European refugees, Holocaust survivors, businessmen, doctors, New Yorkers. There’s not a half-breed Texan ubermensch among them. 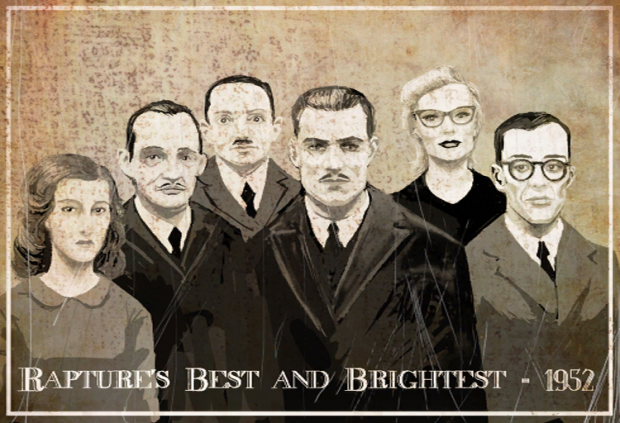 As much as all the characters discussed here have contributed to nuanced portrayals of Jewish identity in games, at the end of the day they’re all still white American Jews. Judaism is a vast ethnoreligious tapestry, but so far the only notable challenge to the stereotype is a Jew that’s even whiter than most stereotypes.

There’s no adventure game following a Mizrahi mother trying to track down her supposedly deceased son she believes kidnapped by Ashkenazi extremists in the early years of the State of Israel. No stealthy building sim of Kaifeng Jews illegally reconstructing their traditions under the eye of the Chinese Communist Party. There’s fertile ground to explore in the experiences of Crypto-Jews, Ethiopian Jews, gay Jews, atheist Jews, anti-Zionist Jews or even fascist Jews.