Into the Breach is one of the most perfect games I’ve ever played. It’s tactical warfare with every sliver of fat trimmed away and I’d put it up there with Chess and Invisible, Inc. in the pantheon of turn-based games.

Bad North will not be entering that pantheon. Not because it doesn’t seem capable of reaching lofty heights – it absolutely does – but because its own take on micro-tactics takes place in real-time. It’s a game of positional play, providing a handful of units and gorgeous, tiny, procedural islands to defend.

Combat is simplicity itself. The maps are so small that you’ll be rotating the camera around an island rather than scrolling across them, and units require guidance but also seem to have a life of their own. If they’re attacked, they’ll defend themselves, and if there are enemies in range, they’ll attack.

The specific role of a unit depends on its type. Pikemen should defend beaches, where raiders land and are impaled before they can head inland. Archers are best-placed on high ground so that they can launch volleys at approaching boats, sending the occupants tumbling into the water. Warriors, with sword and shield, can defend themselves from ranged attacks as long as they’re not distracted by a melee.

There’s more, but Bad North is a microcosm of real-time strategy. There are no bases to build, just houses to defend. Those houses serve a double-purpose. Save them from the raiders, who want to raze them, and they provide cash to spend on unit upgrade, and while fending off the waves of Vikings your units can spend some down-time indoors to recover from their losses.

It’s a risk, healing during a mission, because the unit is sealed in the house until fully recovered. If the house burns, so does the unit. And the micro-scale of the game means that having even one unit out of the fight may well mean you’re fighting at one-third or half strength.

The scale of the islands doesn’t prevent them from having character. Artist Oskar Stalberg, one of the two developers working on the game, has featured on these pages before, and the islands here, with their subtly carved height maps and pathing, have something in common with his previous urban designs. They feel like places with purpose rather than simply functional arenas.

People are the real stars though, not islands. Units are made up of several warriors and they fidget and bustle around as you give them orders. Sometimes a straggler will pop out of the main group briefly and they’ll hop back and forth from foot to foot as they fight. They’d be adorable if they didn’t seem so anxious, and if they weren’t staining the islands red with blood. Sometimes their own, sometimes not.

It’s not just in its ruleset, the delicacy of the counter-attacks and blocking of routes, that Bad North distills real-time strategy to a pure form. When the last wave attacking an island is defeated, you’re whisked away to an FTL-like map of nodes, choosing your next destination as you attempt to outrun the bulk of the Viking forces. But there’s time for reflection before the campaign continues and the camera pans around the island you just defended, the blood-stains telling the story of your brief moment of last-ditch glory. 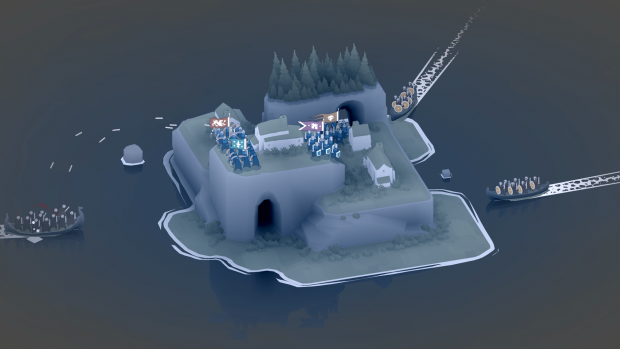 Units persist from one island to the next and losing one is a heavy blow. Replacements don’t come cheap – in fact, you can’t buy them at all. The coins that each surviving house gifts to you can only be used to improve the units you already have, adding active or passive abilities that give them new tactical options, or simply make them harder to kill. Warriors can learn to plunge from cliffs onto the heads of their enemies and archers can fire things more destructive than simple arrows.

When we first saw Bad North’s beautiful GIFs, the appeal was obvious, but how the thing might play wasn’t clear. It’s clear now, and it’s a smart blend of precise orders in tight spaces, and slightly looser simulated aspects of movement that make things just a little less predictable than they might be otherwise. A hulking unit might send units scattering and bouncing toward a cliff edge, but the physics rather than the roll of a dice decide whether they tumble into the water. Arrows thud into shields, flesh, grass or water, their flight and trajectory left partly to chance.

It's that element of messiness that I find most appealing and it, more than the real-time nature of the game, marks the biggest difference between Bad North’s approach to tiny battles, and that taken by Into the Breach developers Subset. Bad North has very clear objectives and rules, but every click you make feels like its half-way between suggestion and command. The units will do as you say, but the twitchiness of their animations and the way they can fall back and break under pressure suggests that sometimes they really don’t want to do as you say.

And, fantastically, you can let them off the hook. If an island is being overwhelmed and all seems lost, your units can cut and run. Tell them to seize one of the boats that brought doom to them and now lies discarded on the shore, and they’ll scarper out to sea and continue with the campaign. You’ll get no reward, having abandoned the people of the island and its resources, but sometimes that might be the only way to survive. Lose all of your units and it’s game over; lose an island and there’s always another just over the horizon. 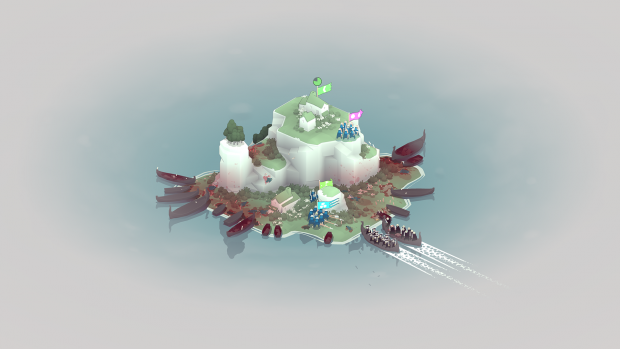 That next island might have a hero of its own and if you can survive the raids, that hero becomes a new unit in your miniature army. In that way, recruitment is part of the game’s flow. There’s no break from the frontlines to create units, they’re found in the field and they stay in the field.

I think that’s the real beauty of Bad North. It’s relentless without being exhausting, managing to maintain a jovial momentum even as the bodies hit the floor and settlements burn. Into the Breach is a time-twisting war to save humanity that takes place one screen at a time, an enormous story presented in perfectly sculpted miniature.

Bad North does something similar but, as far as I can tell, without the same sense of scale. It’s a few single moments repeated in an infinite variety of forms – the first boats emerging from the sea-mist, the assault on the beaches, the exchange of arrows and the lamenting for the dead.

It’s too early to say for sure how many times I’ll want to replay those moments, but right now I’d happily take a month of them or more.