If you click on a link and make a purchase we may receive a small commission. Read our editorial policy.
This is The Mechanic, where Alex Wiltshire invites developers to discuss the difficult journeys they’ve taken to make their games. This time, Bad North [official site].

“The units should feel like humans,” says Oskar Stålberg, co-creator of Bad North, a strategy game about little soldiers defending their islands against bad Vikings. “They’re quite stylised; they don’t have faces and barely have arms, but they should feel human in their behaviour and what they’re capable of doing. They should feel fragile and it should look like fighting is a courageous effort.”

You might be surprised about how much work Bad North does to make your tiny soldiers human. They lead surprisingly full, if short, little virtual lives, and some of the fullest are led by its doughty pikemen, whose weapon of choice presented their creators all manner of weird problems. 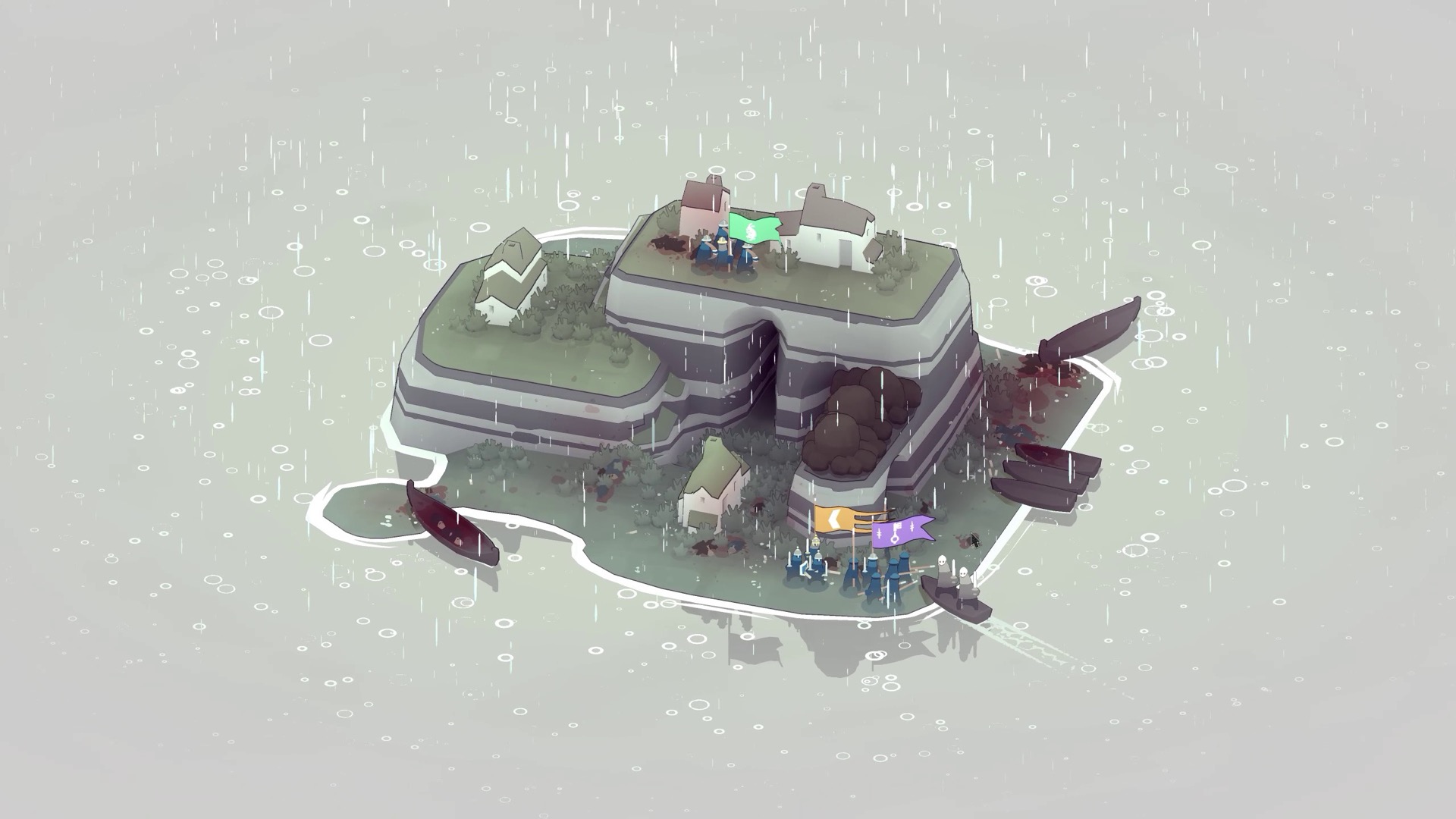 In Bad North you play as a hopefully-stalwart defender of a series of excitingly bleak islands with Scandinavian and Hebridean names. The Vikings will emerge from the ocean fog on longboats, and it’s up to you to position your units of soldiers on the shores and cliffs to defeat them before they burn down your settlements and murder everyone.

You can only take a maximum of four units to each island, and they fight pretty much independently of your control. Your job is to position them, eagerly marching them to be in the right place at the right time, responding to the appearance of new longboats and working out which of your three key types of solder is the best counter.

Your infantry are adaptable fighters who happy hack where they’re sent. Their shields will protect them against Viking archers, but they’ll crumble under a determined assault so they’re your reactive force, there to face off, mop up and support. Your archers are best perched on a clifftop, where they can whittle down an longboat before it reaches shore. But they’re mincemeat if the Vikings get to them first.

The third unit is the pikemen. Stålberg tells me that he wanted pikes in the game because he wanted to buck the Viking cliches. No massive shoulder pads or horned helmets allowed. “I wanted to do my own interpretation of the era,” he says, and when he looked at the weapons used in the era he realised the spear, or pike, was common. “It seemed such an important weapon,” he says. “And it was also a way to do our own fantasy interpretation without double-headed axes or whatever.”

It wasn’t immediately obvious what role pikes would take in the game. He and partner designer Richard Meredith wanted a good deal of Bad North’s depth to lie in the ways that units would combine. Pairs of units should lead to certain strategies, some obvious, some more subtle, and finding the pike’s niche among them took a while. But they settled on, as Stålberg says, “A defensive unit that can’t move when fighting.“

The pike unit is all about anticipation. You move it to a position and the pikes will hold it, jabbing at the Vikings and holding them back. But pikes can’t fight at all when moving between positions. So they’re the wall that the Vikings will break against, perhaps with your infantry attacking from the flank and a line of archers behind, but you’d better be prepared to place it well first.

It’s a neat idea and it fits with the way pikes were historically used, but if you’re not into medieval weaponry YouTube, you probably don’t implicitly know that. “It’s definitely the hardest unit to understand in the game and that’s fine; it’s fun to have to figure out how things work,” says Stålberg.

Still, he and Meredith had to figure out ways the little pikemen could hint at their utility. The answer lay in the pikes. When they’re marching around, the pikemen pick their pikes up and point them upward, and when they’re ready to defend, they lower them, pointing in the direction of attack.

A multitude of subtle systems contribute to this effect, all designed to make Bad North’s soldiers avoid the way units in most RTS games immediately change direction in unison at every command. Stålberg doesn’t like that look. “It’s like a school of fish,” he says, so in Bad North, your soldiers will drop behind the pack and route-find independently, and they’ll take a moment before they disengage from combat.

The result is that you feel like a commander of individuals, not some ethereal mind-controller. And each individual soldier really is individual, because Bad North simulates every element of combat. “What you see happening is what’s happening. It’s not just playing an animation of predetermined things.”

In order to make your soldiers look human and create a fight that flows in a natural way, systems engage to make them pause a moment before entering the fray, press forward and retreat, and appear to work together.

“It’s quite subtle and made in a way that it only has short term effects,” says Stålberg. “It’s not supposed to be a gameplay element, more part of the animation. If it was a proper gameplay element where units can rout and stuff like that, you would need to start adding UI and express it clearly.”

This behaviour is governed by several little gauges that approximate things like morale and stamina. When soldiers, particularly infantry, face a group of Vikings larger than themselves, they’ll hesitate slightly longer than they normally would before attacking together. As they fight their stamina will deplete, and when it dips below a threshold they’ll retreat to catch their breath for a moment, and when one of their friends is killed, their gauge goes down a lot.

Pikes are governed by slightly different rules to infantry. They’ll break if Vikings start getting through their line and hacking at them, whereupon they’ll pull up their pikes and back off. “Sometimes they manage to retain order, if only a single enemy is left,” says Stålberg. “But sometimes they’ll break completely. This is one of the more comical things in the game, they run around panicking with their pikes in the air, trying to avoid Vikings who are chasing them. They usually die quite quickly if you don’t send in backup.” 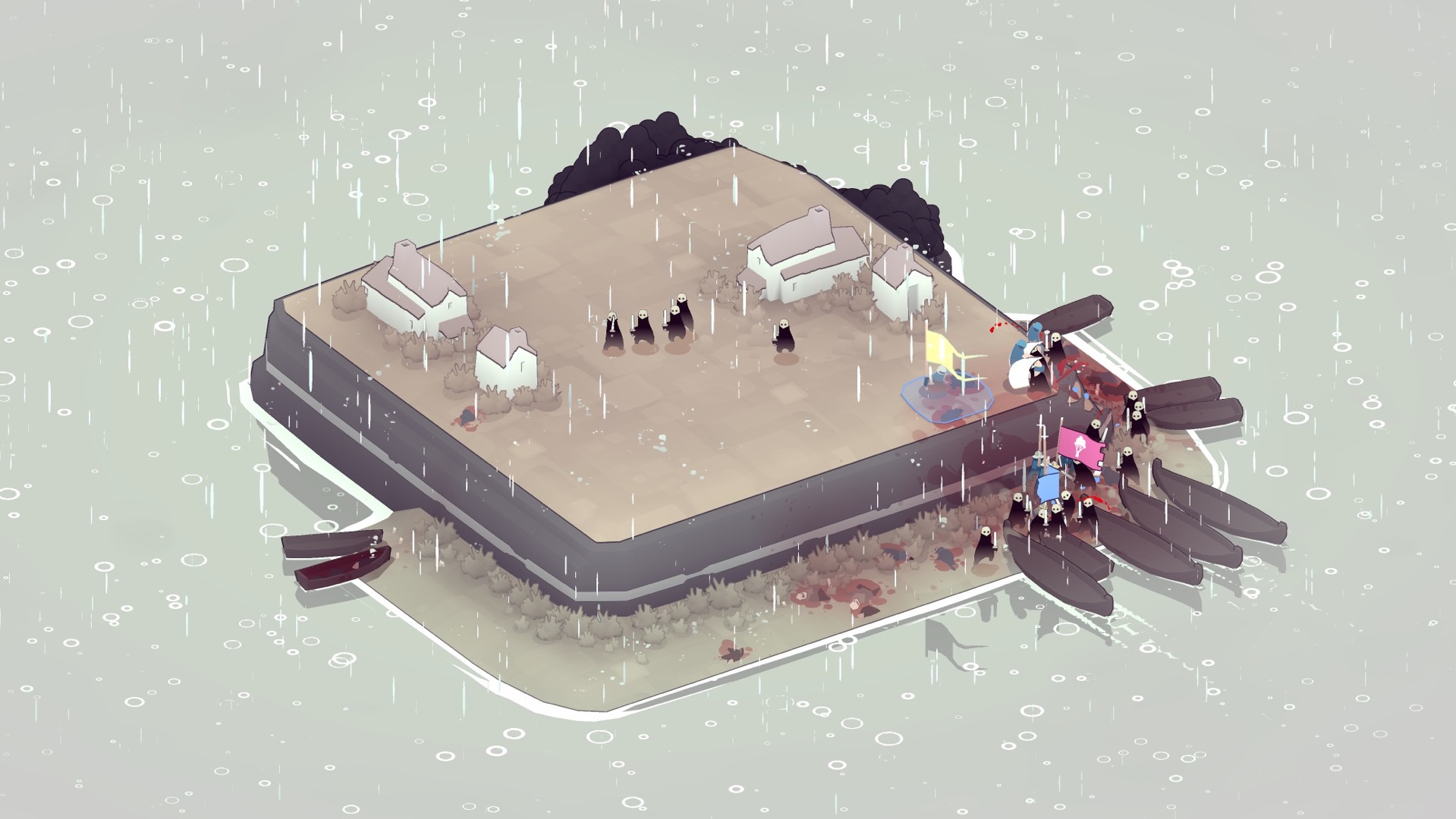 In fact, the pikemen were particularly challenging to design. “What’s tricky about the pikes is,” Stålberg starts to explain. “Well, let me tell you what’s super-simple about swords.” Swords, he says, are easy to make in a game because you can show a little animated swipe in the general direction of an enemy and play a hit effect and it looks good and players understand what happened.

But pikes and spears are inherently pointy. “As an enemy approaches you need to have the pike aimed at them and then strike it, and then there has to be a sense of continuity so the pike needs to remain in that direction until it turns to face the next enemy. There needs to be a sense of weight to the spear as well. You don’t want it jittering around as it swaps targets.”

So there’s a little virtual spring in the pike that makes it wobble slightly as it swings to point in a new direction, lending it a sense of weight. And during combat, the game prevents pikemen from rapidly switching between targets by adding a little timer during which it has to remain trained on its first choice. 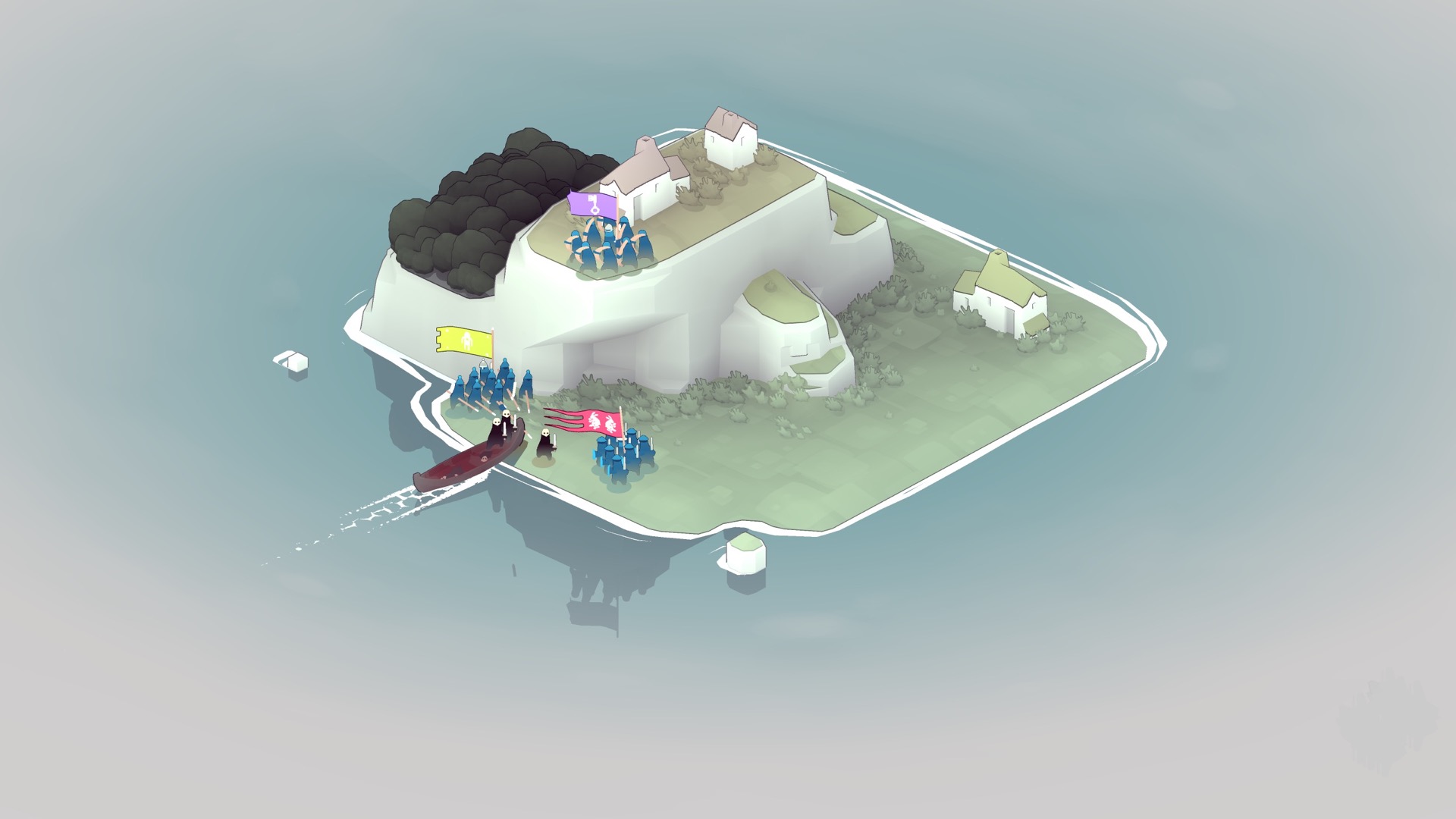 Adding all these little rules was tricky, but the truly difficult thing about implementing them was that they all genuinely affect the combat simulation. “As I tweaked all of this to make it look good, I also had to tweak it to make it fight well,” says Stålberg.

“We want the pikes to be really good at holding positions, but not impenetrable,” says Meredith. “But we have different types of enemies with different speeds and how much they’re knocked back by attacks. All of these different aspects balance out in the simulation, and in slightly different bits of the environment.” It turned out that pikes were particularly sensitive to balance. If they aimed too fast, they’d insta-kill everyone. Too slow and they’d fail to hit any running Vikings.

“I added one thing, where the spears have to queue up to hit an enemy,” says Stålberg. When a pikeman’s ready to lunge at a standard Viking, it will ask its mates whether they’re planning the same thing. If they are, it’ll wait its turn. “Otherwise you could get a group of enemies running forward, all the pikes stab the first one and then he super-dies and the rest of the enemies just come through.” They also check the health of the enemy and how many pikemen it will take to kill it: if it’s a heavy brute Viking, more of the spears will hit him at once.

Even the way pikes break required a lot of thinking. Originally, they’d decide to panic as a unit, which led to ridiculous situations where they’d all run off, just because a single Viking managed to walk a pixel beyond their threshold. Instead, if a pikeman gets hit it tells one neighbour to panic, making the whole unit more vulnerable but not catastrophically so.

And then there’s the whole question of getting them to point their spears in the right direction when the pikemen are positioned and waiting to defend. Getting the closest enemy is easy enough, but they should point at where that enemy will be when it reaches them, not where it is at any point. And then they might also need to orientate their pikes to point up and down slopes, and not look too uniform.

Looking down on your island from the grey North Sea sky and watching your little pikemen stand firm, take losses and brace themselves for the next assault, it’s difficult to really believe that so many complications could be caused by a long pointy stick. But such is the work that comes with approximating humanity.