Spoiler: The dog dies in Battle Princess Madelyn. Fortunately the pooch returns moments later, ghostly, supercharged and ready to avenge its own death. That's the kind of instant gratification you'd expect from a game co-designed by a seven-year-old girl. Released today and developed by Causal Bit Games, it's an arcade platformer heavily inspired by Ghouls & Ghosts, but built to the specifications of the lead dev's kid. She wanted her own version of the SNES and arcade classic, but with a princess. I've played a bit of it, and it's an odd beast. A trailer and thoughts lie below.

Probably my biggest surprise with Battle Princess Madelyn is something the store page barely mentions - it's practically two games for the price of one. The Story mode is a semi-open-world platform adventure. Not quite a metroidvania, but you will need some key abilities and gear upgrades to enter some locked-off areas. Each story level is a large hub branching off into several smaller challenge areas, bosses and so on. Arcade mode, on the other hand, is pure Ghouls 'n Ghosts style, with its own linear set of levels, and far more enemies thrown at you from the start.

I'm only an hour and a bit into Battle Princess Madelyn, so haven't made too much of a dent in either of its sides, but so far it feels looser and woolier than any Capcom G 'n G game. Mercifully, you have full air control of your jumps, so navigation is a bit easier, but enemy attacks have monstrous knockback (busting poor Madelyn out of her armour and down to comfy pajamas and slippers), and hitboxes feel a bit vague at times. At least the lives system is merciful, giving you several near-instant respawns before being busted back to the last checkpoint.

There's something a tiny bit off about the art, too. Most of the pixel art is beautiful, if not amazingly animated, but maybe there's something off with the pixel ratios - it feels a little strange in motion. Credit where due, the lighting effects are nice, even if they are a modern concession. There is one thing that the game absolutely nails the retro style of - the soundtrack. Composed by Gryzor87 (Maldita Castilla, Hydorah, etc), there's options for both pure retro FM/PCM synths, or more modern instrumentation, but even the latter has a nice retro arcade sound to it. 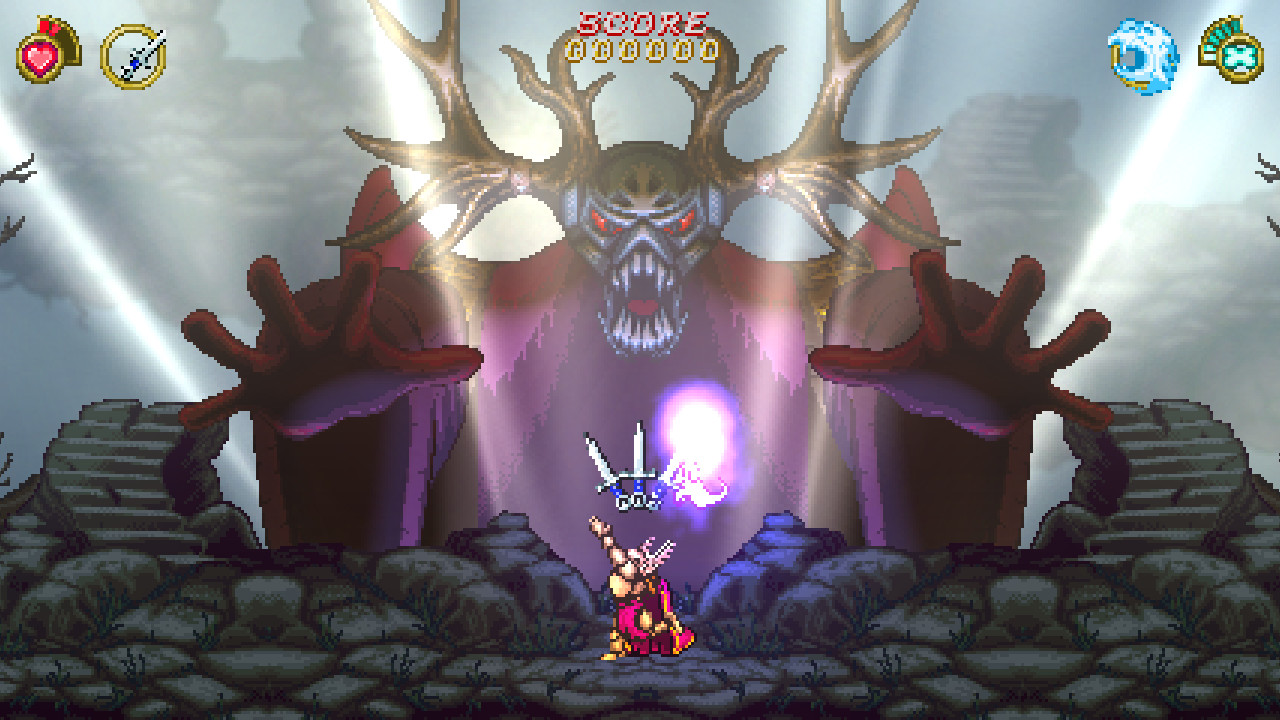 It's too early for me to formulate opinions on this one. There's some stuff I'm looking forward to, including (if the Kickstarter page is still accurate) a whole world's worth of crossover with Maldita Castilla, courtesy of Locomalito. There's some stuff I'm a little wary of, too, including scavenger hunt quests in story mode, and a couple story mode bosses so far that felt a bit underdeveloped, and easily baited into repeating a single, easily countered attack. There's a carefree 'everything and the kitchen sink' feel to the design, reminiscent of the developer's earlier, raucous Insanity's Blade.