Six weeks after the release of Crusader Kings 3, and there are already over 1200 mods, tweaks, and more to download. Paradox's grand soap opera is as much fun to fix as it is to play, it seems.

A lot of the more extensive mods are still heavily in development, so I've steered clear of most total conversions (aside from one that I couldn't not highlight) and stuck to more general upgrades and rules for your kings and queens.

I wouldn't mod CK3 too heavily just yet. The developers are pretty active, and there can be some lag between the game and the mods that follow, so I wouldn't download every file linked in this list in a single game. But picking a couple and rolling your own royalty should be fine.

How to mod Crusader Kings 3

Aside from one external download on Github, every mod is grabbed from the Steam workshop. After you subscribe and download the mod, you'll need to activate it in the Mod tab of the game's launcher. You can enable and disable all the mods there.

Dropping More Game Rules into CK3 will allow you to bend the background sim in all sorts of exciting ways. It's kind of essential if you're always looking for a new way to conquer the world while retaining the overall air of what's going on.

It can be a simple tweak, such as increasing or decreasing Vassal, Domain, or Knight limits by up to 1000. Or you can "shatter" the realms, creating a multitude of duchies for you to deal with. There are more soap opera-ish twists, too. Secret Bastards will let you tweak when the true father of a bastard is revealed, allowing for deathbed "confessions" if daddy hasn't yet been revealed. 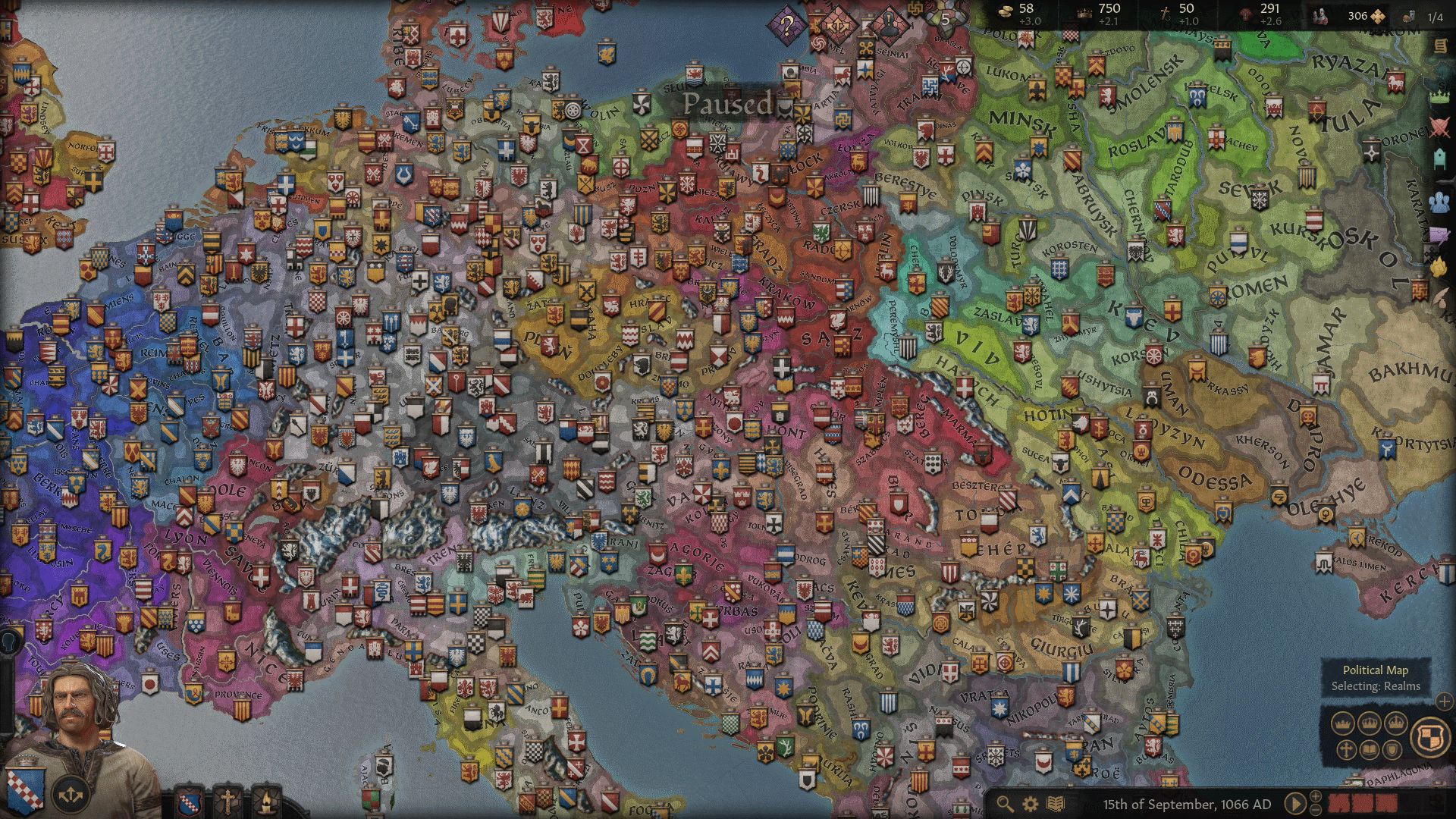 If you want to create your own king, design your own duke, or craft a count, Custom Ruler Designer gives you a lot of control over your dynasty's first ruler. It's a comprehensive list that lets you select sex and sexuality, education, a multitude of traits, and your ruler's physical aspects. You can attempt to make Bob Ross into the despotic monster of Munster.

The designer is part of a quest chain that you access with F8 and selecting "Trigger Character Design Event Chain". Completing it kills off your current ruler and kills or disinherits immediate dynasty members, so you should do it right at the start of a game. 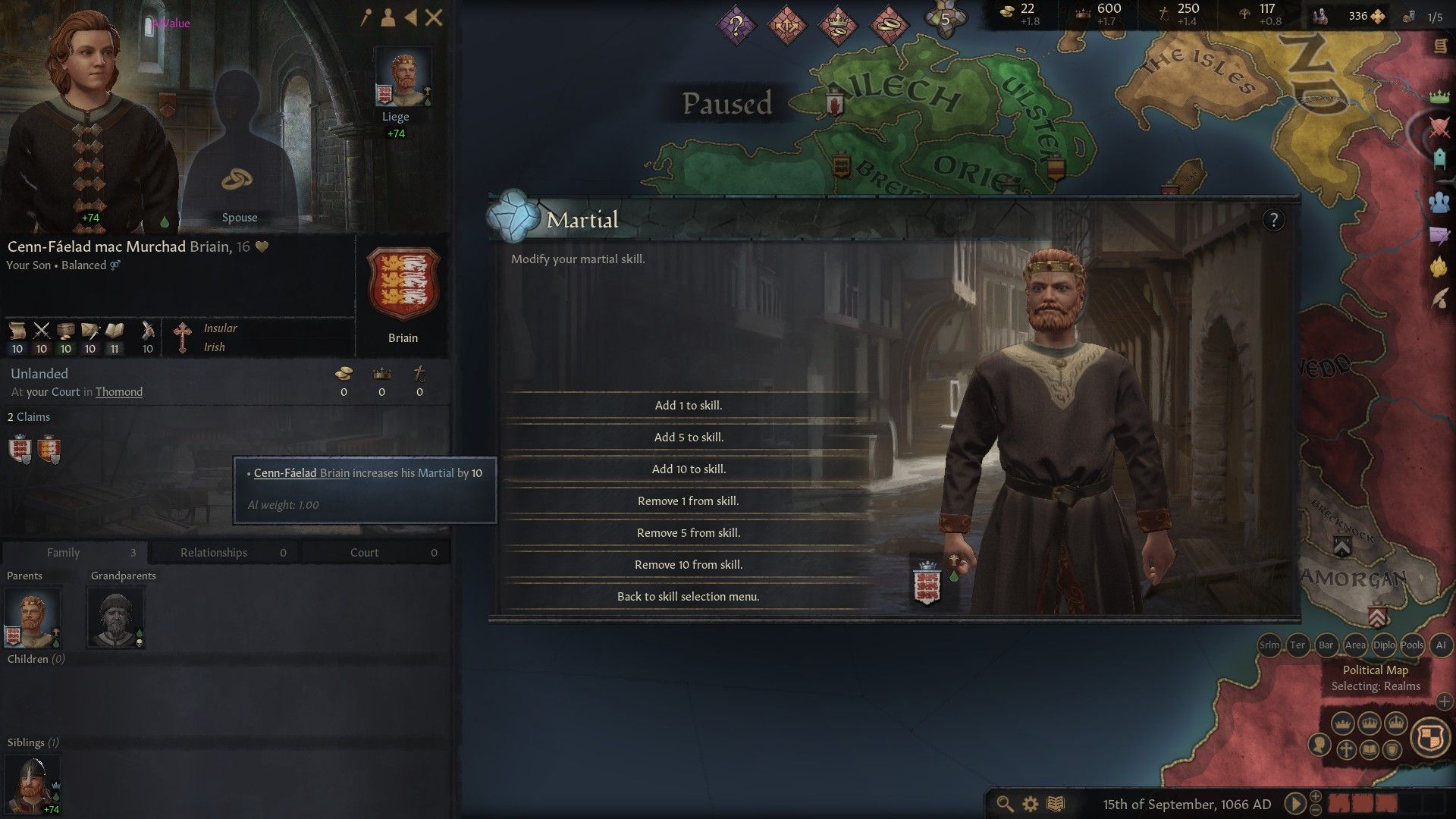 If you want to rename any character at any point in the game, Rename Characters will let you do so. 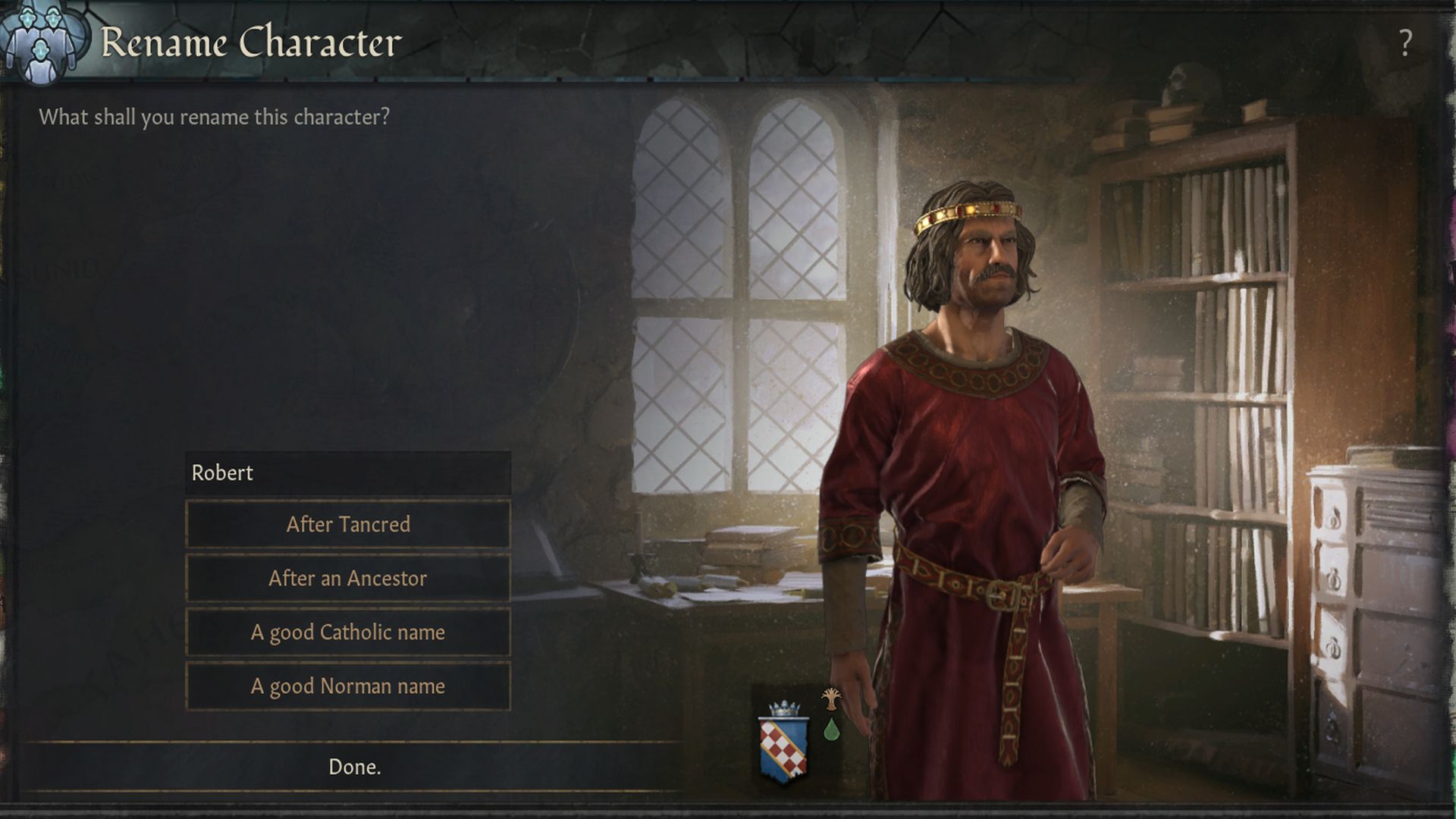 Nameplates adds character information to those event screens that pop-up to inform you of the latest twist in the tale. Now you can see the names, relations and titles of anyone on the screen, should you want to plot revenge on then. 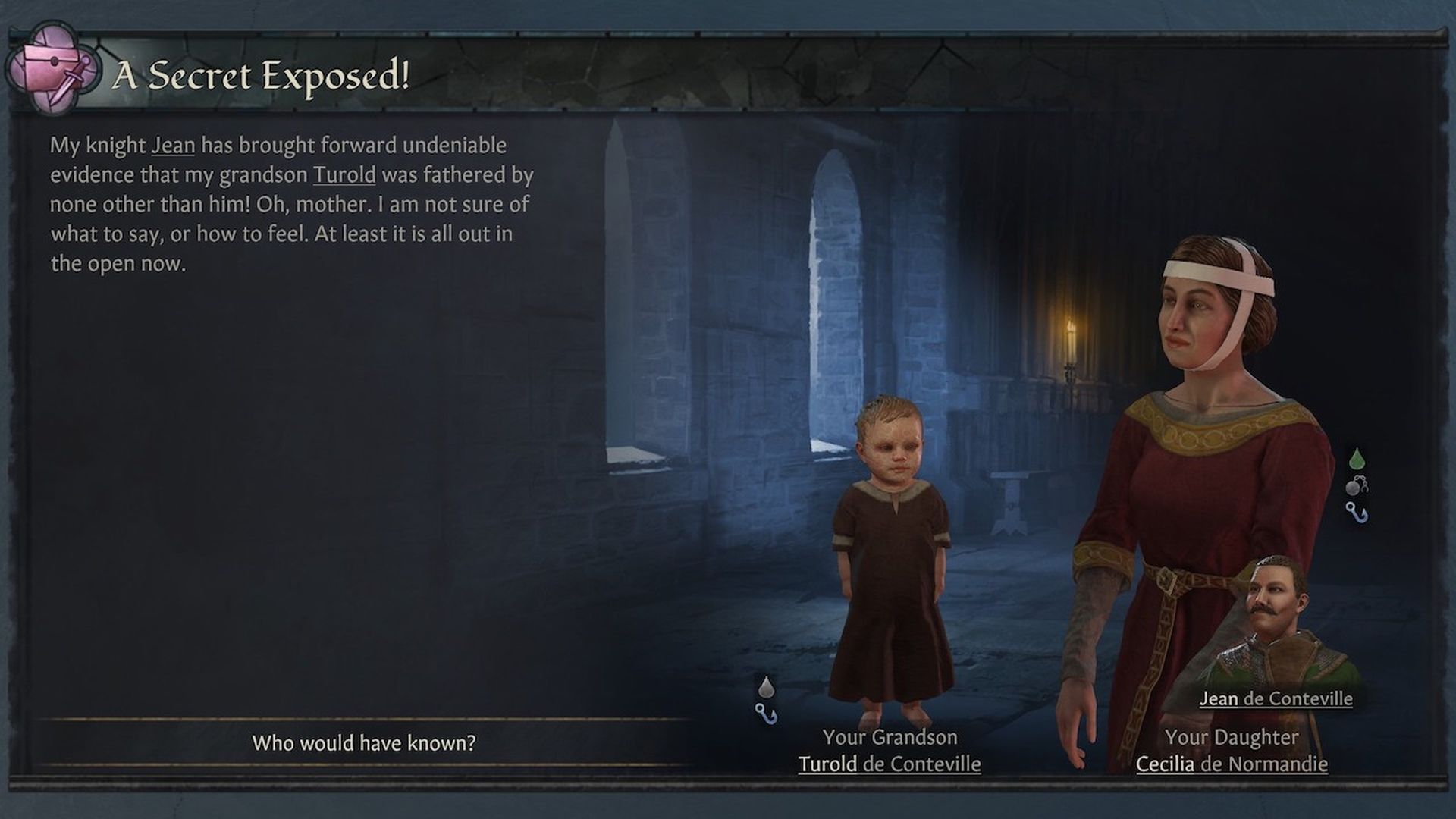 I love this. Fullscreen Barbershop lets you pose any character in the game for screenshots. It has very little game utility, but it does let you craft silly or serious shots of leaders and their families. Great for sharing a story about the time you decided to marry off your child to a pagan. 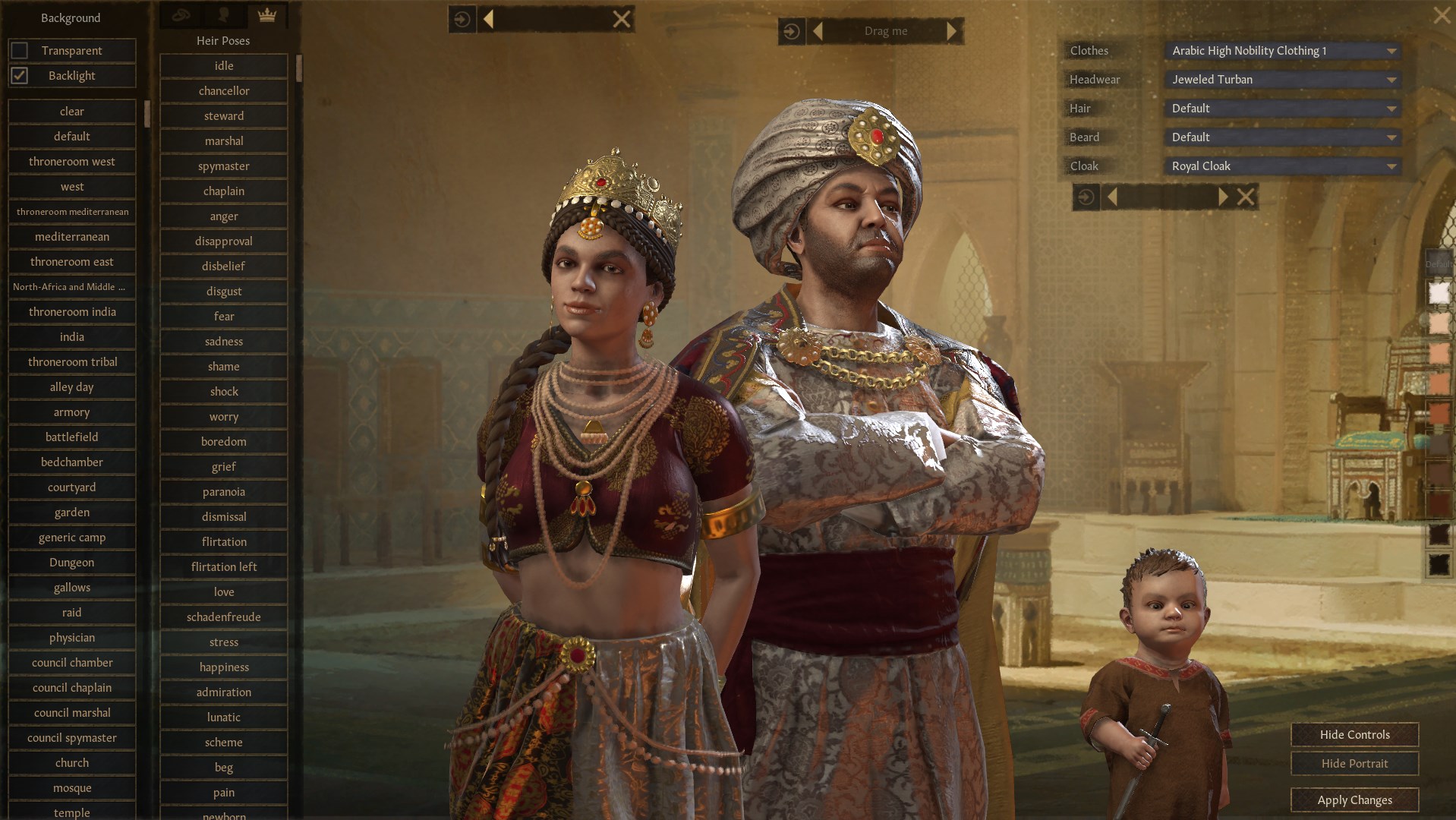 A few more of the game's issues have been redefined as alerts. If you don't have enough knights, or a truce ends, it will now be flagged on the UI for you to see. 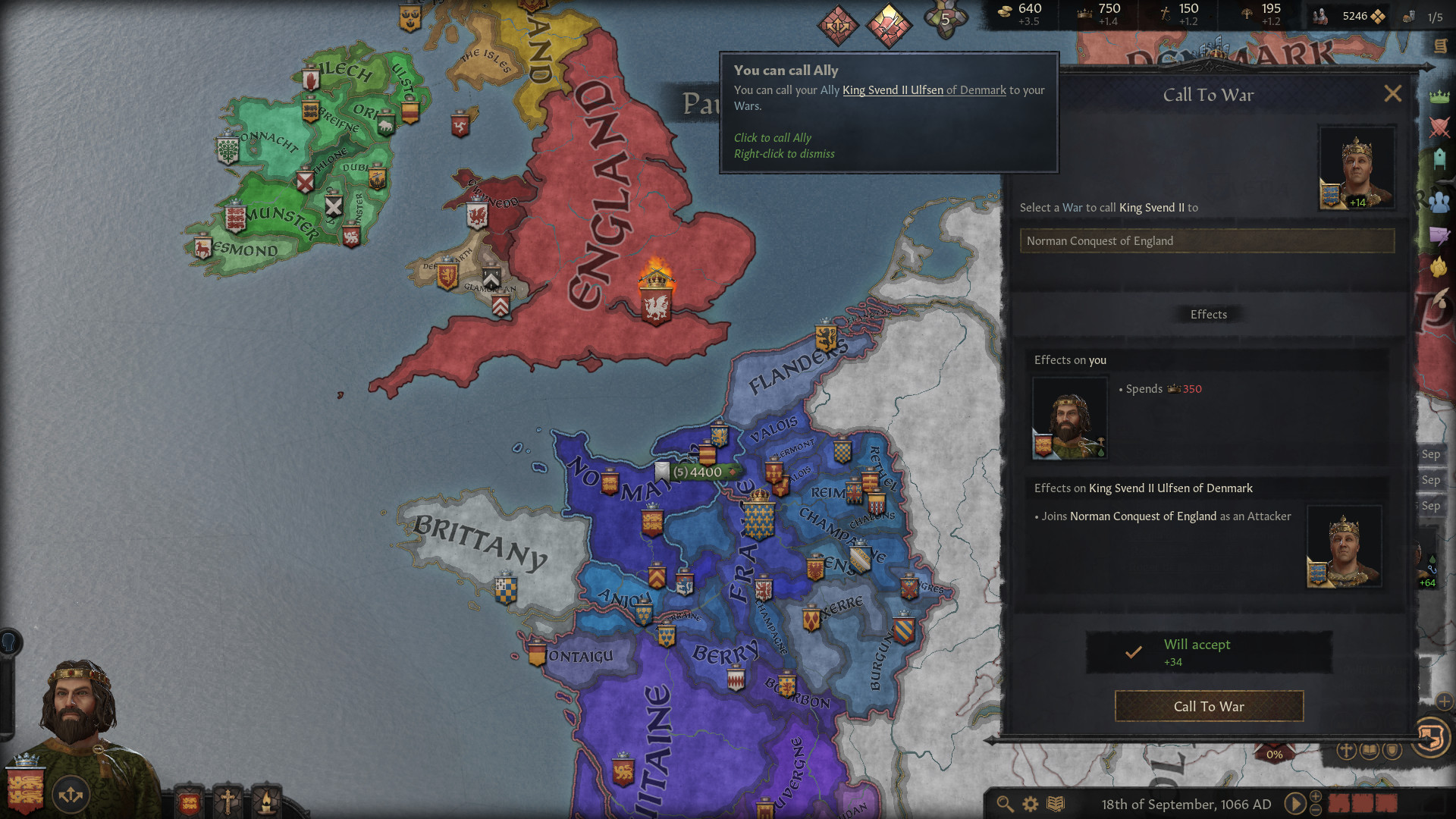 A collection of mods that, all together, will enhance the readability of some UI elements. They're based on CK2's UI. Pick what you like from the list of three enhancement mods. All three work together. 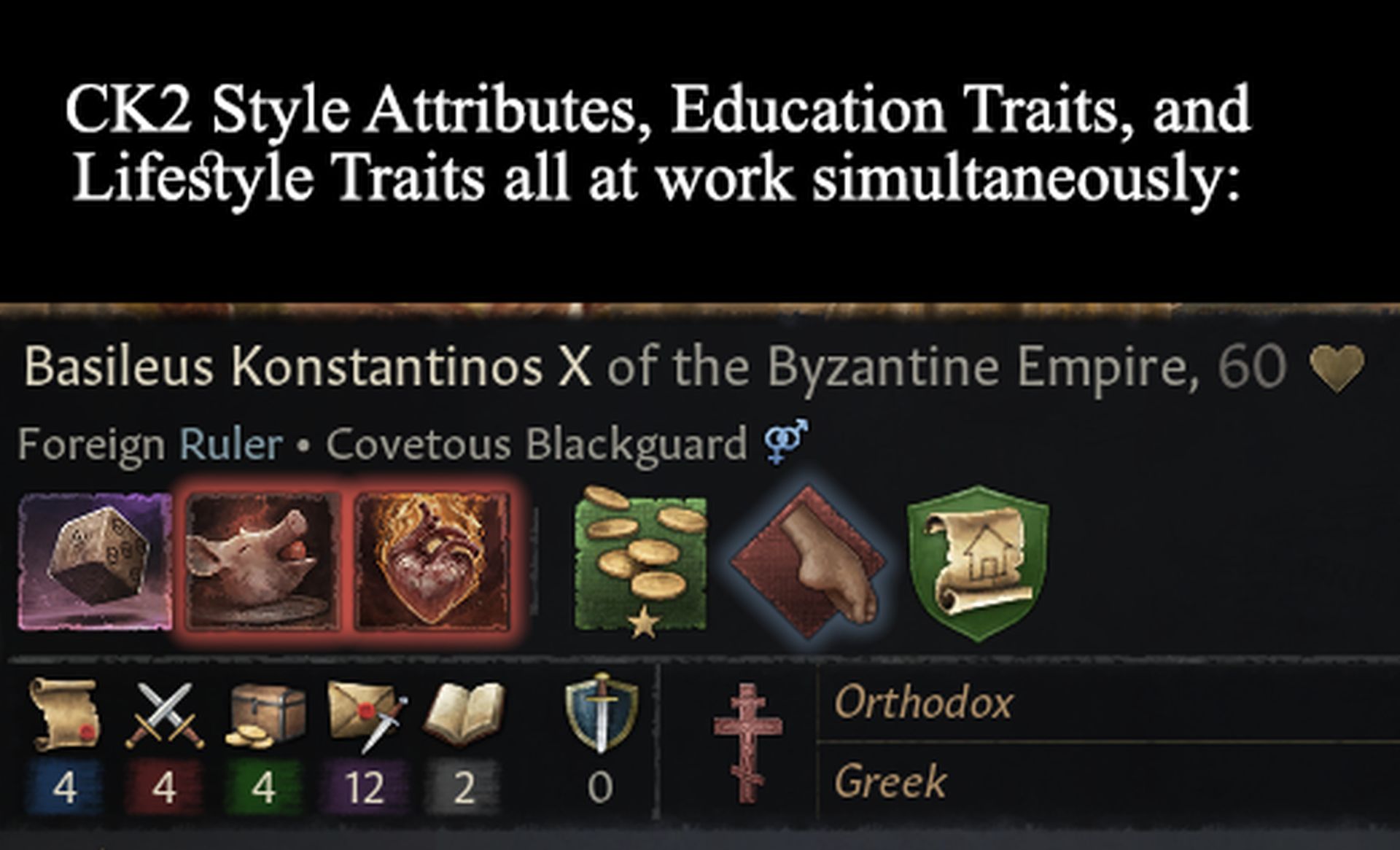 The Community Flavor Pack adds a slew of portrait accessories to give your character and AI more clothing options. There are a lot of hats and armour drawn from historical sources to retain CK3's aesthetic, while looking very 1295. 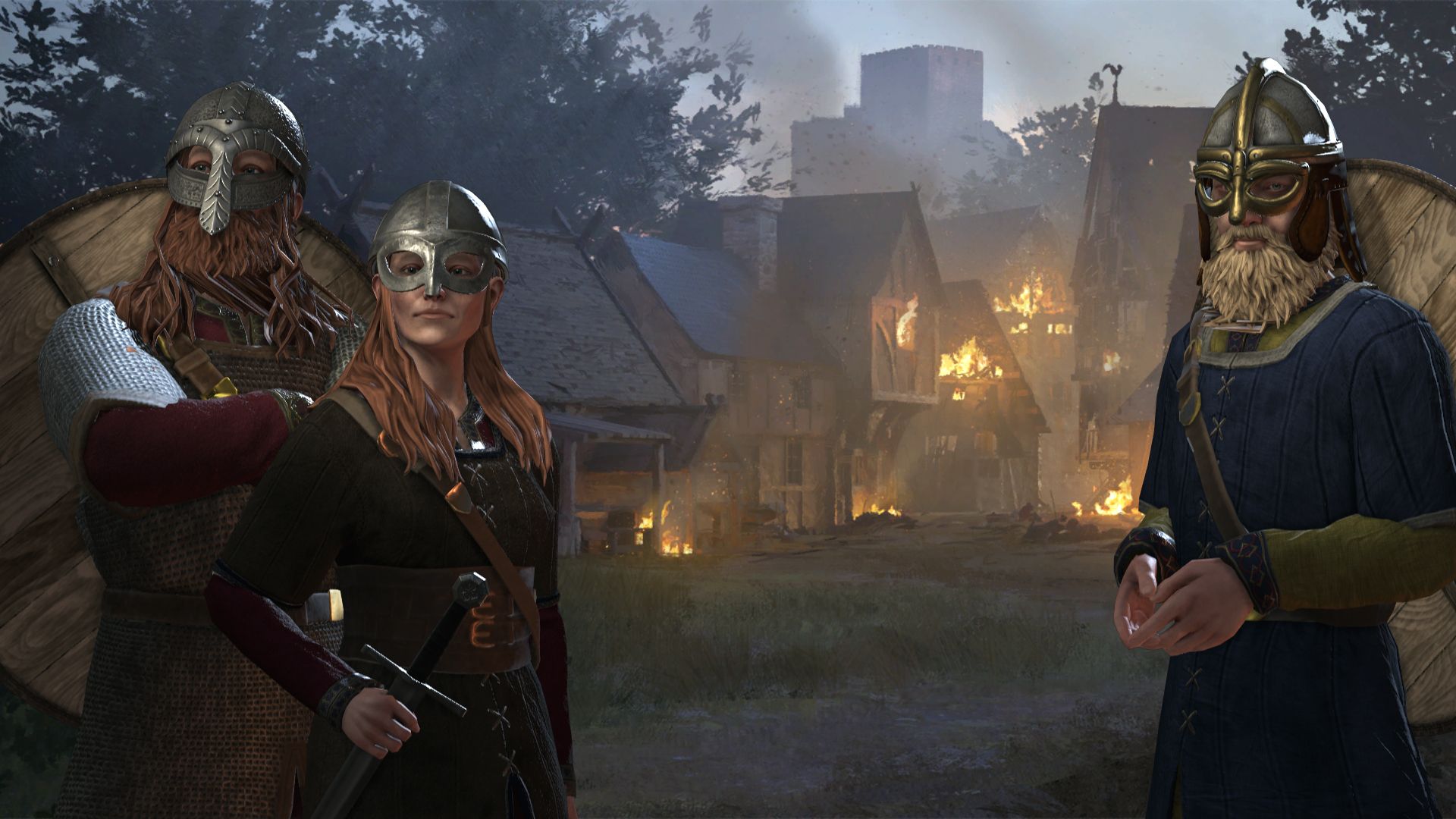 CK3 to EU4 Converter by idhrendur

This might be the most impressive mod I've ever covered. There are several steps involved, but CK3 to EU4 Converter will enable you to continue a Crusader Kings 3 campaign in Europa Universalis 4. That means you can run an uninterrupted game from 867 to 1821 onwards, leaping through Paradox's historical strategy sims (there are convertors for Victoria 2 and Hearts of Iron 4, too) like Dr Sam Beckett. Oh boy.

This is the one mod that won't come from the Steam workshop. The link below will send you to the latest GitHub release of the converter. When you run it, it will create a mod for EU4 that carries over the world state (as best it can), and the save game.

It's an excellent idea to read the wiki, as there are particular ways in which things have to be changed in order to work from one game to the other, but it's from a long line of mods that all work on a similar theme, so the makers know what they're doing. 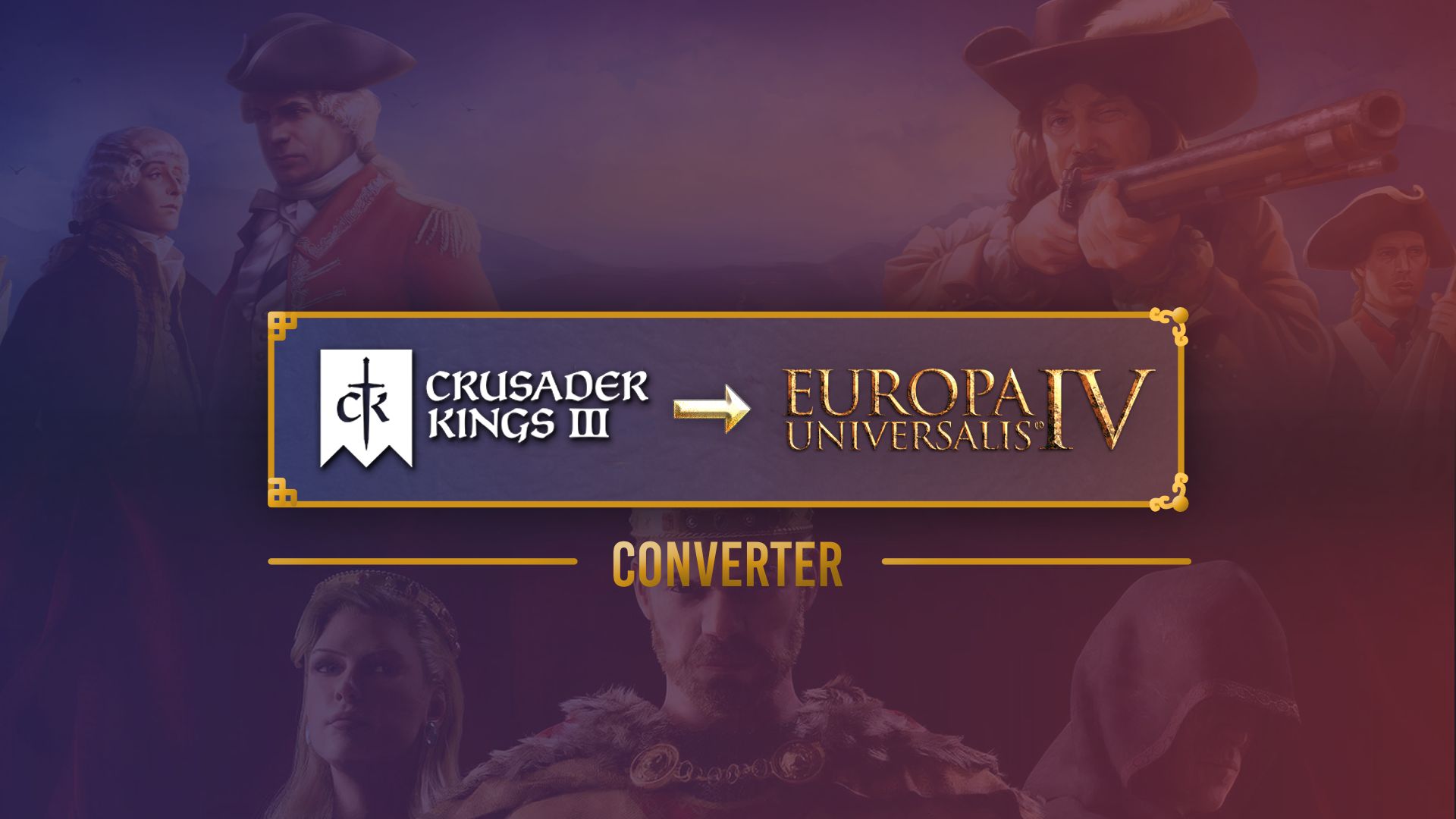 Very Immersive Events and Tales mod already exists as a CK2 mod, and this is the CK3 follow-up.

It's a mod that adds a lot of small moments to the game. Your ruler will marvel over local delicacies, be wowed by travelling bards, and think of a witty comeback a few days after they should have thought of it. Over 200 such moments will fill in the hours between the deranged ruling class's attempts to eat each other. I consider it a must-have. 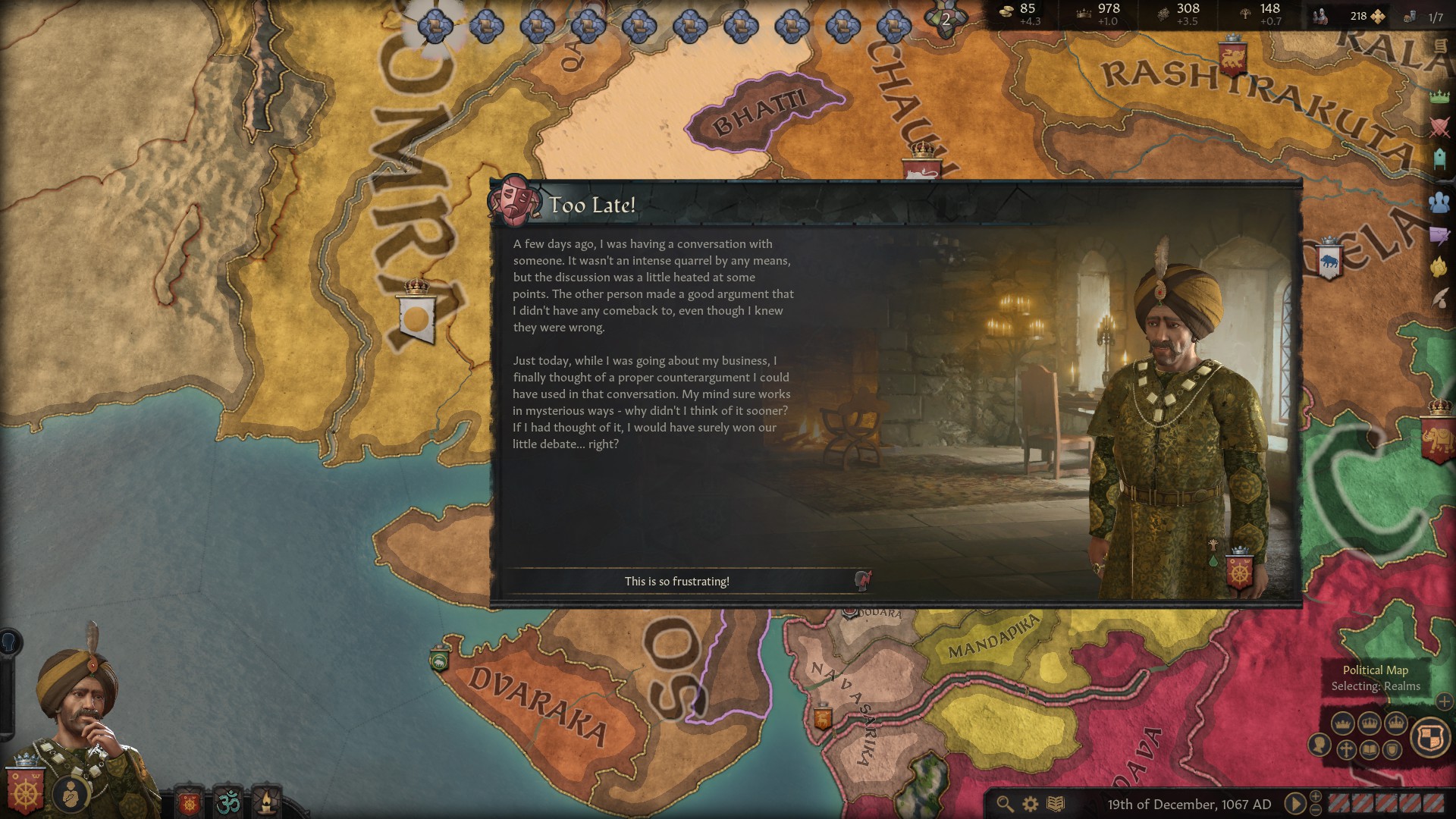 Princes of Darkness by Sparc

I can't mention people eating each other without flagging up Princes of Darkness. It's a complete overhaul (in progress) that will meld CK3 with the World of Darkness universe. Yup, you will become an immortal vampire, and as you'd imagine that has a significant effect on lineages and death.

Adopting that Sanguine Lifestyle will mean you're now immortal, or at least you can't die due to disease or old age. You can be put to death. Succession is way less of a concern, and marriages are now an entirely political tool as they don't produce children. Religion is far more critical in WoD, creating the core tenant of your character. You need to manage your bloodthirst and stress, or you'll unleash your inner beast.

The long life of vampires makes the mod a slower game. You learn at a far grander pace, and focus on devilish disciplines, like Blood Magick. There are historic, Vampiric events that you'll need to deal with, like 1230 AD's War of the Princes. 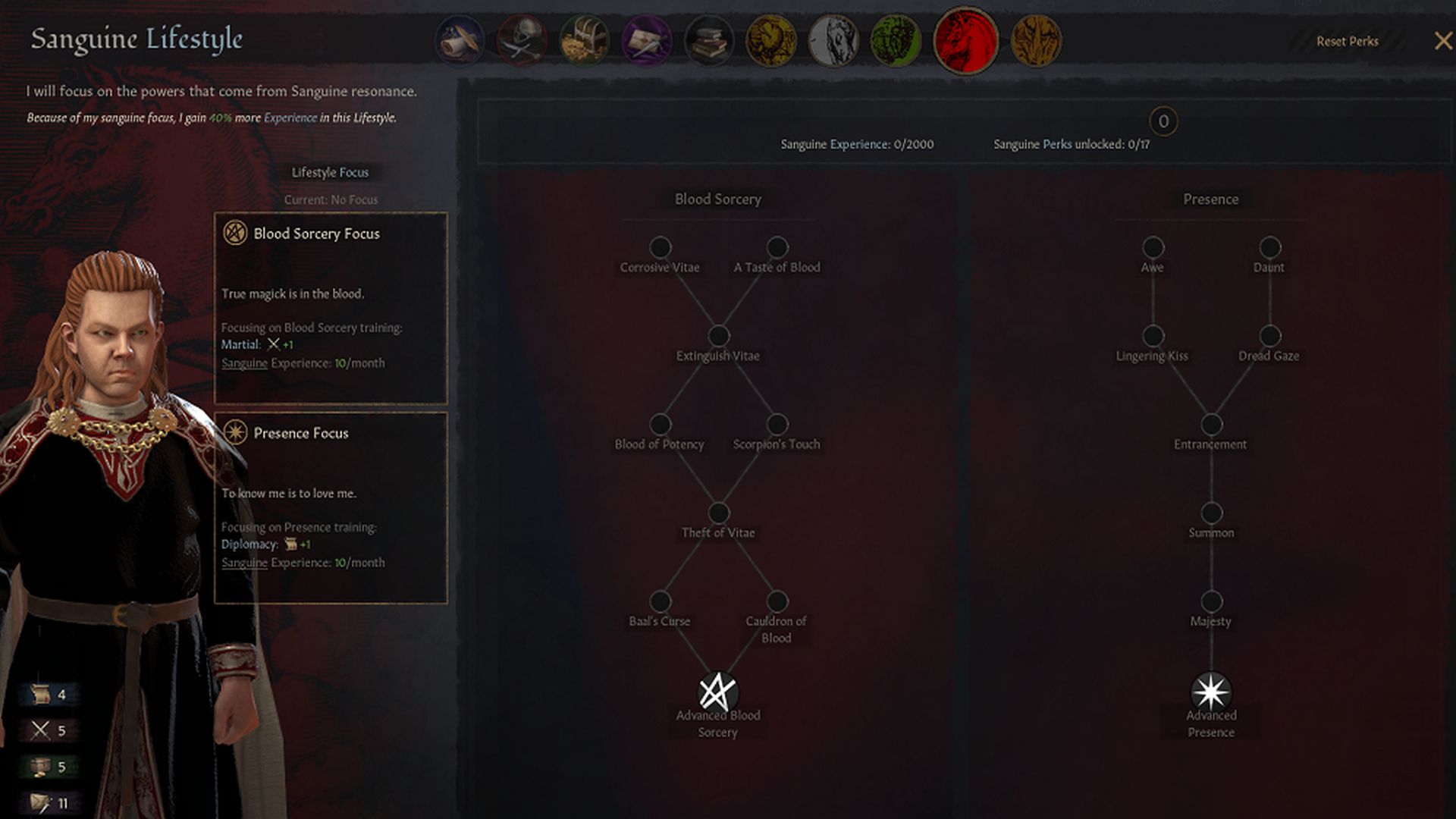