If you click on a link and make a purchase we may receive a small commission. Learn more.
Every other Monday, we give you a reason to dust off one of your old games and dive into its mods with Modder Superior. This time, Craig has collected some great mods for Terraria, now it has an officially integrated modloader.

Terraria’s final update, Journey’s End, is just the beginning. Developers Re-Logic have pulled off one final trick for their huge fanbase, making popular community mod manager tModloader officially supported. It’s a lovely gesture that means the players will have easy access to the bewildering amount of fan-made items, monsters, total conversions, and more, even if development has ceased.

I had to editorialise a lot when looking around for mods for Terraria: there’s a bewildering amount. I didn’t want to overwhelm things with content mods, because there’s an issue of balance with some of the larger mods. As much as I love OTT boss battles, I generally prefer Terraria’s mods to feel like part of the original game. The rest are QoL addons, because there’s nothing better than wrangling the vast, unwieldy systems of Terraria into something just a tad more manageable. That’s what we’ll be working with, so let’s get to it.

How to install Terraria mods

The officially supported modloader tModloader is on Steam. With it you can search and install mods from the menu, simplifying a lot of the modding process. It’s free, you just download it.

It’ll launch a slightly older version of Terraria, 1.3.5. It sits alongside Terraria version 1.4 as a separate game (the tModloader team needs to update everything to the latest release). You won’t be playing the most up-to-date version of Terraria, but if you’re modding things then that might not be a huge concern.

With it loaded you’ll have the mod browser and modloader integrated into the game, with everything available from the main menu. It’s helpful if you know exactly what you want to install, but a tad cumbersome if you’re looking around for something interesting without a goal in mind.

Speaking of the menu, don’t forget to check the controls. When mods are loaded in, they often need their hotkeys bound. If you think things are broken, it might just be that you need to bind a key.

If you’re looking for a mod that takes the basics of Terraria and turns them all the way up until the speakers whine and smoke starts pouring out, Terraria Overhaul is a good one to have. It’s mainly a mechanics mod, with the addition of new dodges, seasons, spreading fire, and more. So much more.

The biggest boon for me is the modified movement set. There’s a slew of helpful additions, like dodge rolls that’ll add a small burst of immunity and let you regroup. Wall flips let you turn around while maintaining momentum, and wall jumps let you scale structures. My favourite additions are the rocket jump, just for a blast of explosive fun, and the swinging hook that lets you Tarzan through levels. I’ve always been a fan of OTT movement options.

Then there are seasons, which add a dynamic cycle of environmental changes as you play. Every 12 in-game days the seasons will alter the forest environment, slowly stepping from Spring all the way to Winter, altering things like the rate of floods and lightning, what items the sellers have, and how well flora grows. It even affects the mod’s fire spreading mechanic, which spreads differently depending on how wet the environment is.

Those big changes are underpinned by all kinds of combat tweaks (head strikes, charge attacks), buffs, tools, and more. It is a huge chunk of change that builds on Terraria.

If you want a lot of thoughtful additions to Terraria, then Thorium is worth the download. It adds a lot to the game but does so with the care of a semi-sequel.

The Bard is probably the most impressive new class. Each of the new weapons built for the Bard are pretty ridiculous. There’s an offensive didgeridoo that blasts out sonorous pulses capable of piercing enemies. The tambourine acts like a boomerang. The more technologically inclined might want to pick up the boombox, an energy weapon that blasts nearby enemies. Heck, there’s even a vinyl record that slices people up. There are dozens of offensive instruments, creating a one-man-band of pain.

The Aquatic Depths biome sits beneath the ocean floor, accessed through a large hole in the sand. It has the typical treats of ore veins and biome-based enemies (barracudas, clams), but as with all Terraria trips, everything leads to a new boss. And here you have “Abyssian, the Forgotten One”. This shelled crab beast is a multi-stage bastard, ramping up machine-gun attacks with additional rams and slashes as you fight. It’s worth the effort, as the Depths themselves will change to a more hospitable, breathable environment when you win.

If there’s one thing Terraria isn’t short on its items. Working out just what you have after even a few hours becomes one of the game’s tougher challenges, which is where Magic Storage comes into play.

It enables you to connect multiple storage containers together, turning a large and confusing sprawl of boxes into a more easily accessible and expandable inventory. Aside from stitching together chests, you can also use it to connect crafting stations to your hoard so you can make things from stored material. There’s also a handy remote access connector, enabling players to access crates without being near them.

It’s a super handy addition to the game, one that will absolutely become one of your first installs. 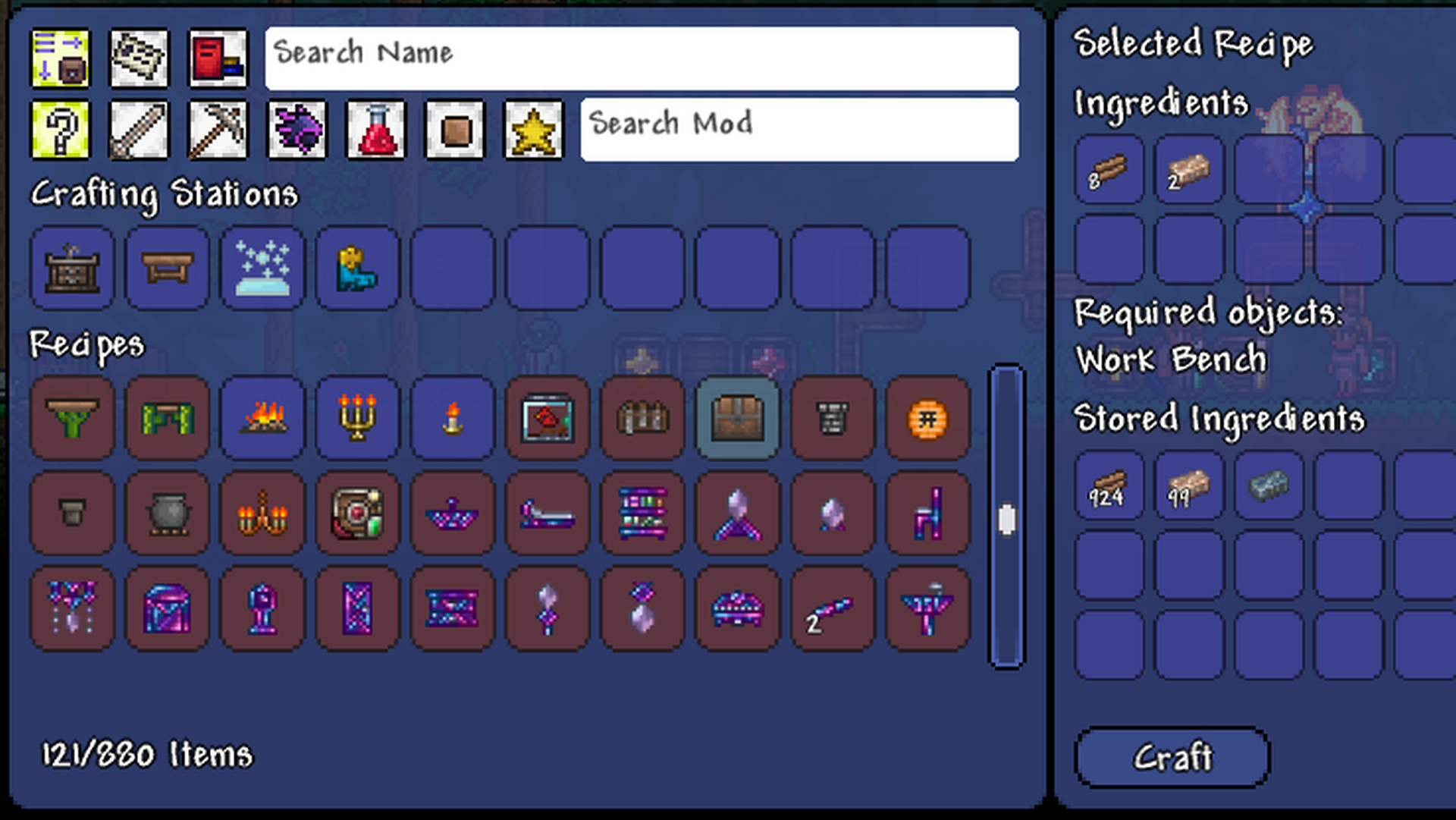 Another mod that seeks to tame the wild, overgrown garden that is Terraria. This recipe browser is a fantastic addition to the game, enabling players to use the game’s own items to show you what you can craft.

It started off with the simplest of notions: you take an item from your inventory and slot into the search box. The add on will show you all the potential items you can make with it, including items you can craft right away, or doodads you need additional ingredients for. Further development of it has gained the ability to craft multi-stage recipes, bookmarks, a complete in-game item search, and the ability to link to the required objects in the multiplayer chat window, so people can help you search.

Your mouse can take a hell of a beating in Terraria. Mining each and every block in a world made of *counts on fingers* several blocks is a bit of a pain, which is where Veinminer can help out.

It’s a simple addition that enables you to collect an entire vein of ore (or more) simply by hitting a single chunk of ore. With the veinminer hotkey held down, all the connected ores of that type will be mined. It’s a bit cheaty, but Terraria is a game where clicking is king, and my fingers really could be saved for other things, like tickling my cat’s chin.

Fargo's Mutant mod’s focus is quality of life. It adds a variety of NPCs, changes, recipes, and weapons to take the sting out of grinding.

The town’s new NPCs are there to sell items that help with progression. You can buy simple materials, like wood, from the lumberjack, or more head over to the mutant who’ll sell you various boss summoning trinkets. They’re a fun, in-game way to access gated off content. Cheaty? Sure, but if you’re living in a living, breathing world someone is going to set up a shop with this stuff, so I think it fits.

If you’re adding more and more content mods to the game, there comes a time where you might forget who you’ve slain and what you want to do next. Boss Checklist seeks to remedy that, somewhat. It’s an in-game list of your potential boss battles, letting you check off which ones you’re looking to take on.

It supports all the major content mods, though it does rely on other modders to enable support so if you have a minor mod it might not be supported. As Terraria is a game about progression and boss battles, it’s a smart and recommended add-on.

Not to be confused with Scully and Hitchcock’s favourite chicken shop, Wing Slot is a quality of life tweak that gives you an extra, wing specific, slot to your inventory. It is the smallest of small tweaks, but it’s helpful to free up an accessory slot you might otherwise have needed to use. 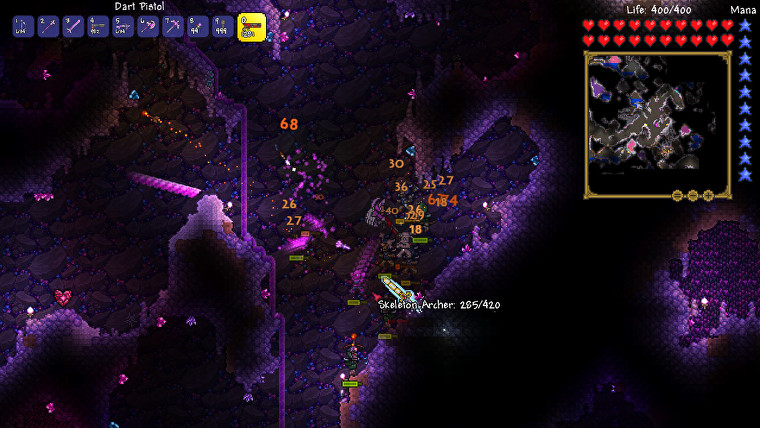 Download Wing Slot (scroll on the page to find it)

A standalone map editor for Terraria, this simple paint program drafts out whatever you want for the game. If the standard Terraria template isn’t for you, this will help.

The tools are there to help free your imagination, with basics like dragging out elements along a grid backdrop of tiles. From that blocky beginning, you can plonk down prefabs and craft whole castles.

This wouldn’t work without game design elements, so you can add chests and define what’s placed in them, craft puzzles with pressure plates, and lots more. Here’s how to start.