It's not the Portal follow-up we were expecting, but it's the one we got. Bridge Constructor Portal is a crossover between Valve’s comedy science puzzler and the strut-straddling engineering of the Bridge Constructor series. You’re still making bridges that wobble from A to B, and sending small vehicles across your creations. However, you also have the distraction of portals, turrets, proulsion gel and catapults, as well as a passive aggressive computer that passes judgement on your techniques. It feels fruitless to review such a straightforward cocktail - it's two flavours you may already know so let's just see how they blend together. And the opening chapters are reassuring. This is a decent wee nugget of a puzzler.

The humour of Portal gives me mixed feelings. Instinctively, I’ve always liked it. The jokes land, the premise is silly and the characters, from GLaDOS to the softly-voiced turrets, are as darkly fun as they’ve always been. But to pretend it hasn’t suffered at the hands of our needy, grasping gaming culture is folly. I can’t remember a time when my diaphragm reacted with anything other than a sickly heave at that cake catchphrase. And yet I know there is a time that I smiled at it.

As such, Bridge Constructor’s bash at the series at least gives you some new lines at which to smile. I fear the arrival of references to old jokes (they are inevitable) but so far there’s only a strong adherence to the nomenclature of the series. Buttons are still called “heavy duty super-colliding super-buttons” and blue forcefields are still called “emancipation grills”. Fresh grins do appear when Ellen McLain’s GLaDOS is given something new to talk about, although I won’t lie, the ratio of Ugly Donkey Laugh: Exhaling Out Your Nose to gentle smile isn’t anywhere near that found in its first-person cousins. I’m willing to forgive that, however, and be happy with the sight of stickmen falling off the back of their forklifts whenever I make a bridge that unexpectedly falls to bits, especially when I send multiple forklifts in a convoy - the true test for any bridge. 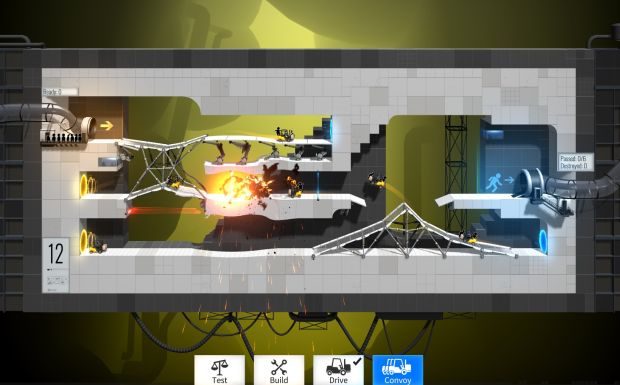 You can’t choose where to place the portals, everything is already set up for you, in the fashion of a puzzle with a definitive solution. Likewise the anchor points for your bridge’s struts are welded into the environment. This means that creative solutions are limited and that process of looking around and “thinking with portals”, to use the laboratory’s classic language, isn’t present in the same way. That’ll disappoint some folks, no doubt, but I’m happy to put down my portal brain in place of my bridge brain for this one. At least for as long as the six chapters allow.

It’s a solid bridge-builder made for the purposes of some happy, healthy time-wasting, not a stopgap or cure for heartsick Portal fans. But that’s fine by me.

Bridge Constructor Portal is on Steam for £6.99