**You might remember my long-running weekend column DOS Boot. Well. Turns out the one time I thought of a pun and decided it was just too much, everyone in the comment section demanded that I lean in. (Also, I was overwhelmingly not playing games that were on DOS. Whoops.) So me taking a little time each weekend to revisit some ridiculous PC title is now called Brock Paper Shotgun. Fight me.**

I love getting smarter. I thought I was smart in my 20s and I was, decidedly, not. What have I done to change things in the interim? I stopped playing as many video games and I started watching a lot of documentaries that made me sad a bunch. One of the weirdest moments this lead to was a series of docs about the LA riots that informed me LAPD Chief Daryl F. Gates was not a hero. This was something of a problem, because LAPD Chief Daryl F. Gates helped make the Police Quest games, and I grew up thinking that's what made him the Best Good Dude. I was, for some reason, shattered to discover that the guy I thought was The One Good Cop was actually not.

If I was smarter I should've seen that coming. There's also an incredible deep-dive at Waypoint about this very issue that you should read.

But, the issues with the Police Quest series aside, there's always been one title that stuck out to me. It took a chance on game design in a way that no one else had, and I'm hard pressed to think of anyone who has since. That game is Police Quest: SWAT 2 (1998).

SWAT 4 is, as we've written, perhaps Irrational Games' finest hour. Police Quest: SWAT was an FMV nightmare and basically unplayable now... and was basically unplayable then. SWAT 2 takes a very real-time XCOM approach to police work, and in the process creates some of the most memorable video game levels I have ever played. 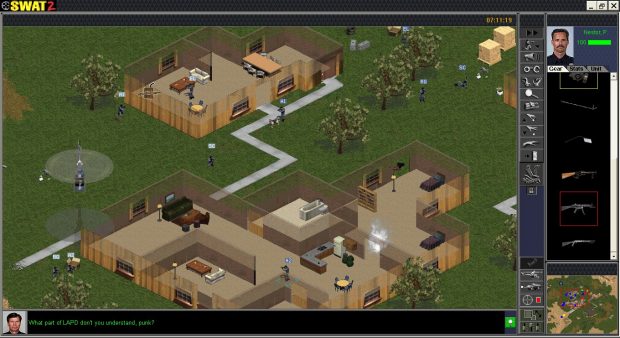 There's a million different tweaks from equipment to training to how you can attempt to detain and arrest the baddies to dog companions to setting or diffusing booby-traps. The realism and attention to detail was perhaps too far ahead of its time, since often the game couldn't keep up with its own systems. For example, there's a throw phone that you should be able to toss at the baddies to allow a dialogue to begin with the hostage negotiator. Unfortunately, almost every time the terrorists just start shooting at you instead, so this entire game system is basically useless. Again: more ideas than they could make work.

Also, terrorist booby traps are plentiful and hard to detect and you can lose your entire team in a single movement. And there are usually civilians running around. Sometimes this civilians are actually terrorists and you might not be able to tell until they kill you. There's a lot here that is so far outside the realm of your control it makes for a strikingly realistic set of unknowns. Maybe that's why it's my favorite police simulator? 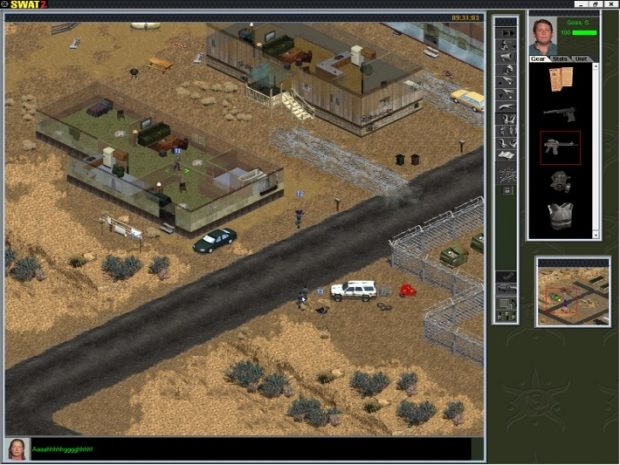 The thing that solidifies SWAT 2 for me in the echelons of PC history is this: once you're done with the game, it turns out there's an entirely different campaign. You can play the entirety of the game from the perspective of the terrorists. And you have all of the same game systems, including training your team, knowing what part of their backstory brought them to this cult, and even managing a set of entirely different weapons than what is available to law enforcement. This cult is based in a weird environmentalist nonsense thing that I absolutely adore, but what I love more is that the terrorist missions are wayyyyy more interesting than the SWAT missions. All the SWAT missions involve just stopping the terrorists, but for the terrorists you have to rob a bank or kidnap a millionaire or hide a bomb. It's a much more complicated, engaging game for the bad guys. And now, knowing what I know now about LAPD Chief Daryl F. Gates being a bad guy, that makes hella sense.

Check out a video of some of the gameplay below, which shows off both sides of the same conflict on a single map.

In closing: actual Swatting is maybe the worst thing a person can do and you will get caught. Having to watch this play out in a city with people I know and love has been a traumatic experience to say the least. Revisiting SWAT 2 this week was really plagued by the knowledge that this is part of a thing we're doing in games culture and it's getting people hurt. Instructing my little cyber police men to kick in a door and go in guns blazing felt... wrong. And if you're someone who feels as complicated about this as I do, maybe now isn't the time to try this game for the first time.

If you're into it though, give it a spin on Steam. It's a couple of bucks and there's (obviously) a lot there.