If you click on a link and make a purchase we may receive a small commission. Read our editorial policy.
Developer: Stellar Entertainment (remaster), Criterion Games (original)
Publisher: EA

Burnout Paradise is one of my all-time favourite games. It's always in my top 5. I've bought it on multiple systems, multiple times. I come back to it more than any other game. And bloody hell, there are things I hate about it. Things that, for reasons beyond comprehension, EA have chosen to leave in the Remastered version.

So, this is Burnout Paradise again! And that's splendid news. I still love it. I'm still just so delighted to be playing it again. 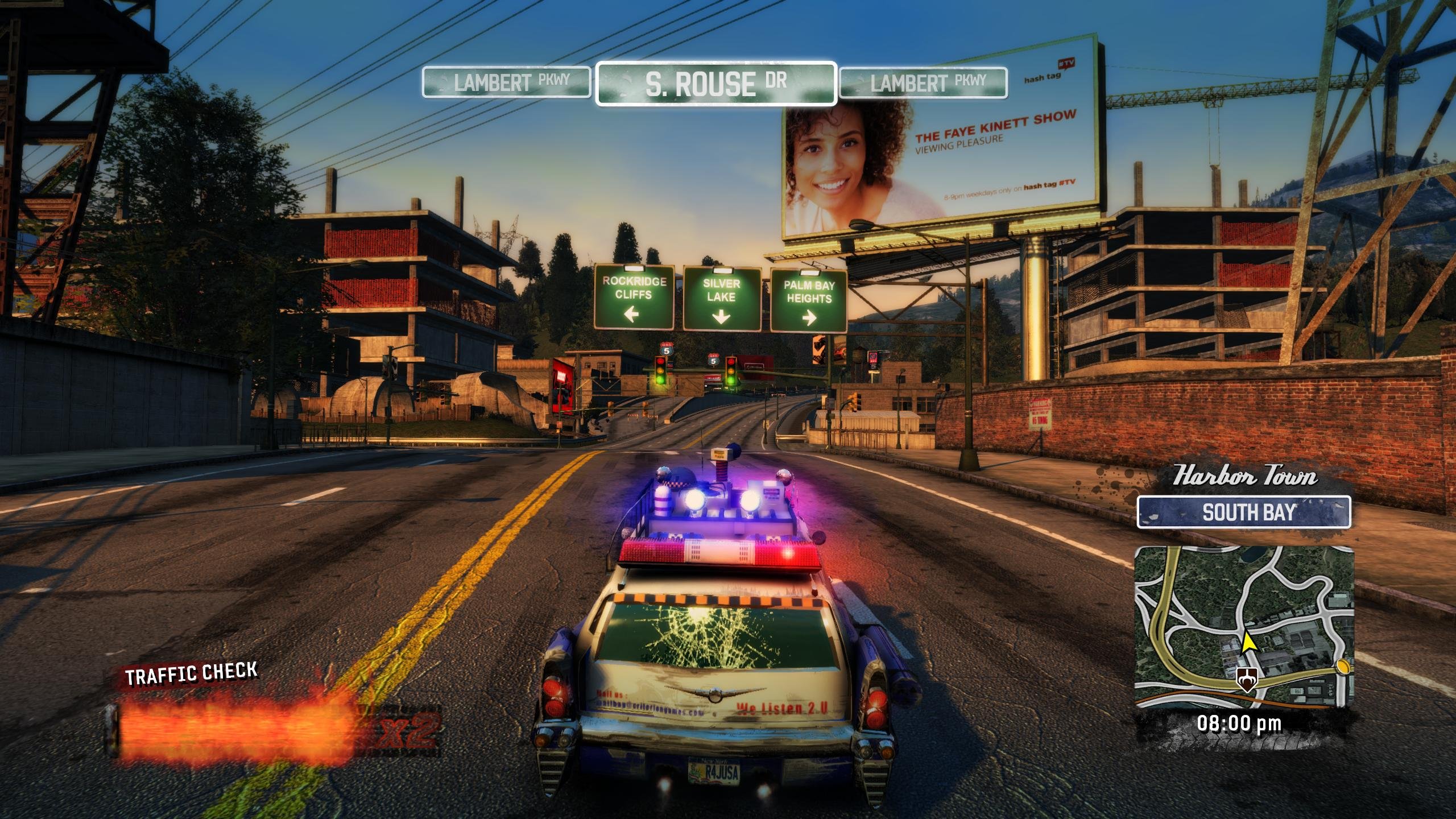 Honestly, the old PC version worked just fine (I've tried to run both versions to compare, but because of the god-awful Origin integration, my Steam version of the Ultimate Box no longer runs.) But what we've really got here is a sort of Ultimate Again edition, that throws in absolutely every last plip of DLC that was ever released for the game, including everything the PC was previously denied.

It already ran at modern framerates, really, but I'm told all sorts of technical things have been improved. It certainly looks pretty enough, while undeniably very dated. (If you want to know what's actually changed, this article from the spods at Digital Foundry says things like "MSAA" and "SSAO" as if anyone knows what they mean.) Clearly the real reason for the remastering was so a favourite game could be re-sold yet again on PS4 and XBONE, but the pleasant side-effect is we get an even shinier PC version for far less money.

Improvements even an idiothole like me noticed, however, include a revamping of the textures on things like the faux adverts so they're legible (or indeed completely new) again, as well as sharpening up the game's most important feature: the red smashable advertising hoardings. It overall looks a lot crisper, the blurriness that you'd stop noticing after a few minutes before is now gone, and the crash effects look prettier to me, albeit still enforced and unskippable. An aspect which really brings me on to the big problem here, before I'll return to enthusing about why I love Paradise so much... 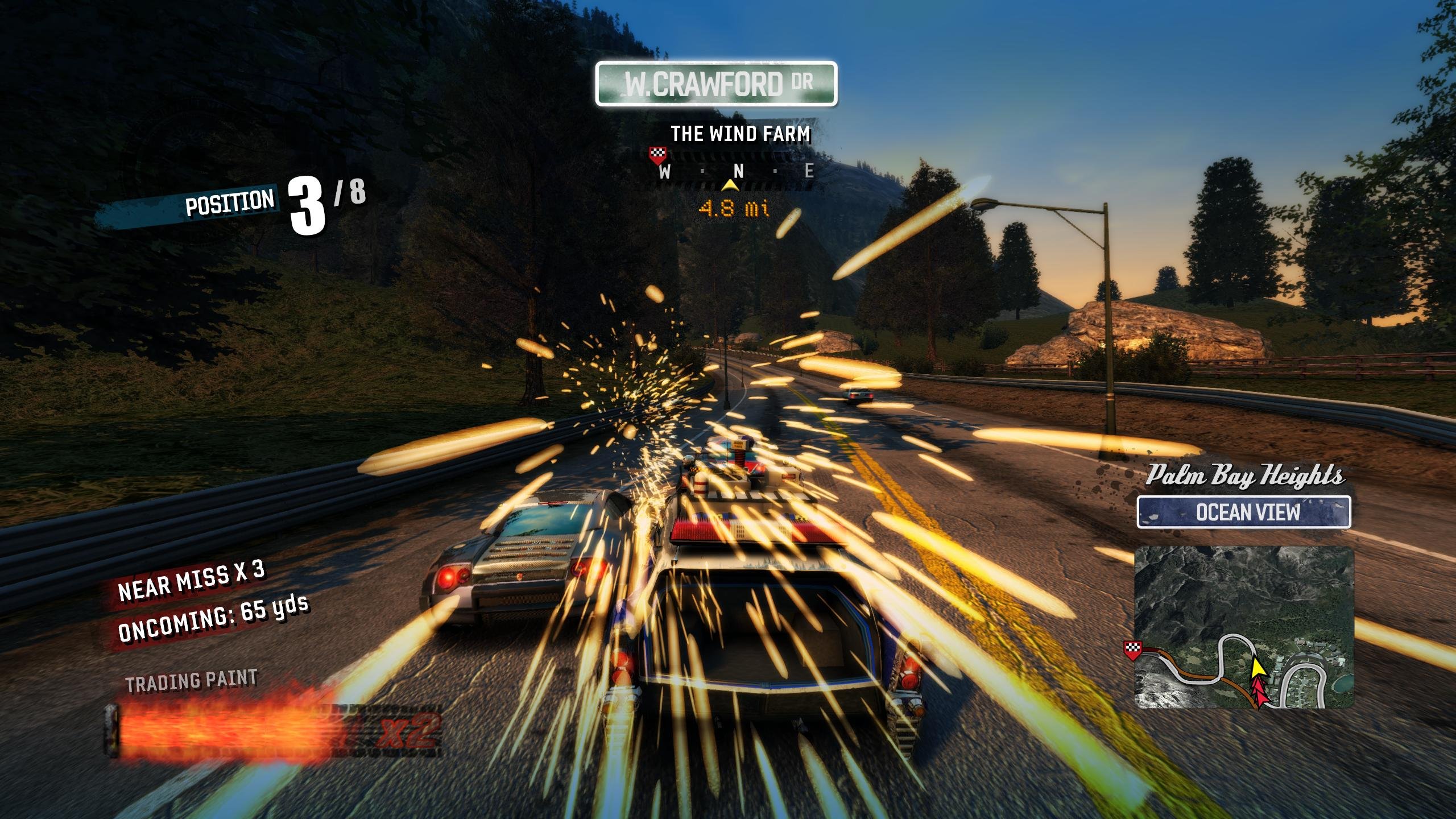 Surely if you asked anyone who had ever played Paradise what they would want to change about it, they would immediately say three things before the question had even finished:

Astonishingly, none has been done. So once again, for maybe the twentieth time in my life, I'm forced to sit through the barely comprehensible, wholly unremastered low-res blur of an agonisingly long meaningless opening cutscene, all the while wishing I could just change the game's resolution. What's most mad about this is it does have a menu before it launches into all this, but even now all these years on, doesn't think to let you access the game's options from here.

Of course, Paradise's hideous beginning doesn't end there. After what must be one of gaming's longest unskippable cutscenes, you're still not given control. Because then arrives the game's absolute worst feature, "DJ Atomica". The ever-present wanker who bleats shite at you from start to finish. But at the start, you can't just pretend he's not there and play the game, because right now he's in control. He still tries to take a photo of you for your pretend driving license, and scolds you if you don't have one attached. Then when you're finally, FINALLY able to drive a car, he's not shutting up. He's going to tell you about cars forever! And he's often going to take controls away from you mid-drive to explain to you the thing you literally just did. He is the worst. How is he still here? 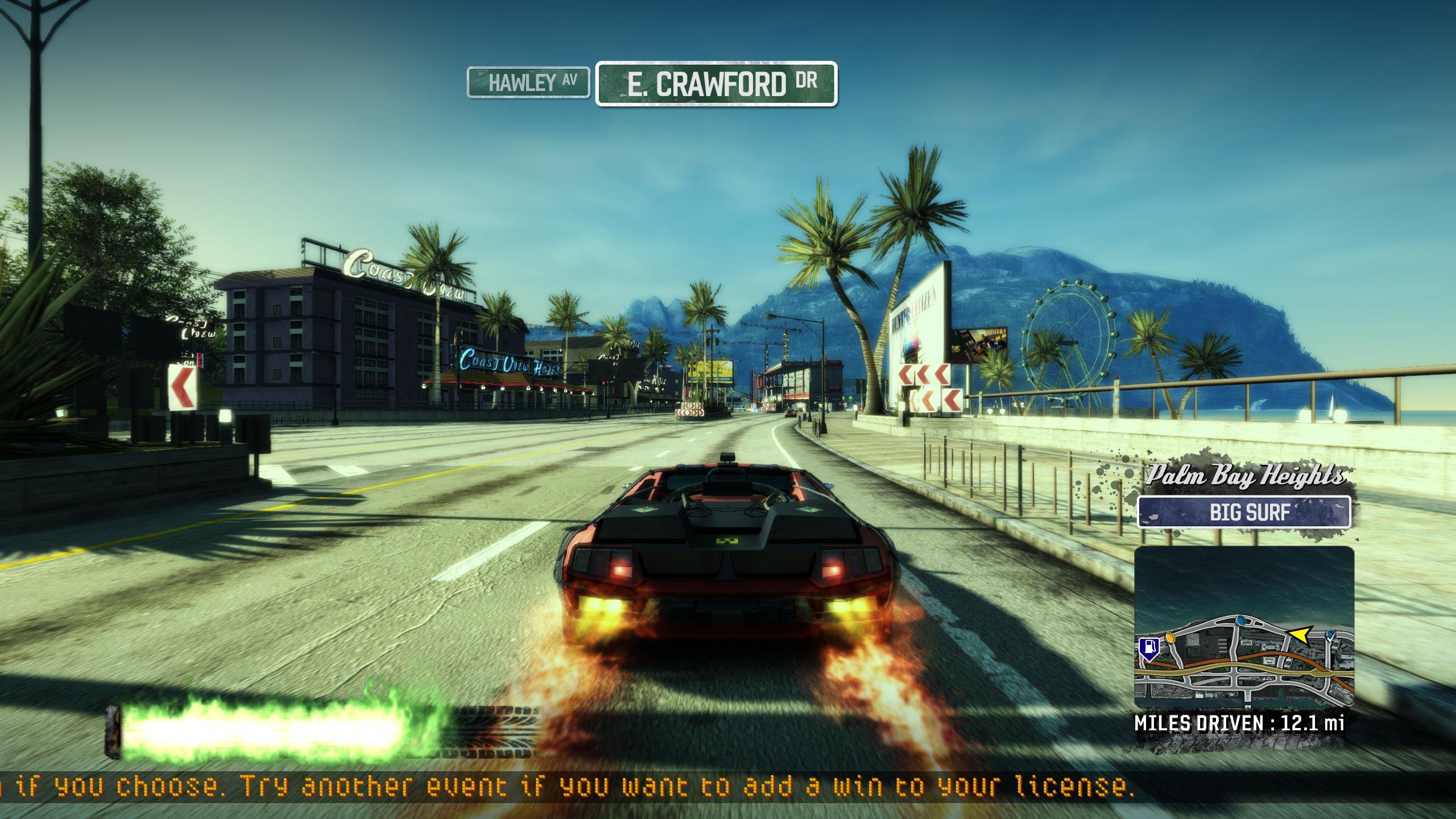 And I'm not really being cute about this. DJ Atomica was a stupid mis-step by the game when it was first released, a tiresome WAKKA WAKKA morning radio DJ persona who was universally hated. Sure, everyone joked about how much they hated him, but they did that because they hated him. While clearly Stellar Entertainment have faithfully re-crafted the game to take advantage of modern consoles, and thus modern PCs, the core game itself remains utterly identical. It seems such a wasted opportunity not to have said, "Right, come on, what was actually seriously wrong with this game? Let's fix that." But unfortunately this absolutely hasn't happened.

So the game still has unskippable everythings, from that awful opening to the tiresome interruptions of its almost always badly framed, boring, over-long "Wrecked" sequences. (This was clearly a vestige leftover from Burnout 3, where crashing was the joy, but for some reason never properly realised here and yet left in to drearily stop you from playing for no entertaining reason.) It still has patronising interruptions to explain elements that for some reason are almost always only triggered after you've already done them. It still has its horrendous clusterfuck of menus that were always a burden, which could so sensibly have been redesigned here.

In fact, the only obnoxiously bad thing that does appear to have been fixed is the game's insatiable desire to communicate with a server EA switched off years ago. I ran the vanilla game this morning before updating, and still it spent many minutes on a locked up blank screen trying to speak to a server that isn't there, or doesn't want to talk to it. Remastered still rather oddly announces that it's connecting, but in less than a second moves on, and huzzah and hurrah, you no longer have to enter your EA username and password to start the bloody thing. 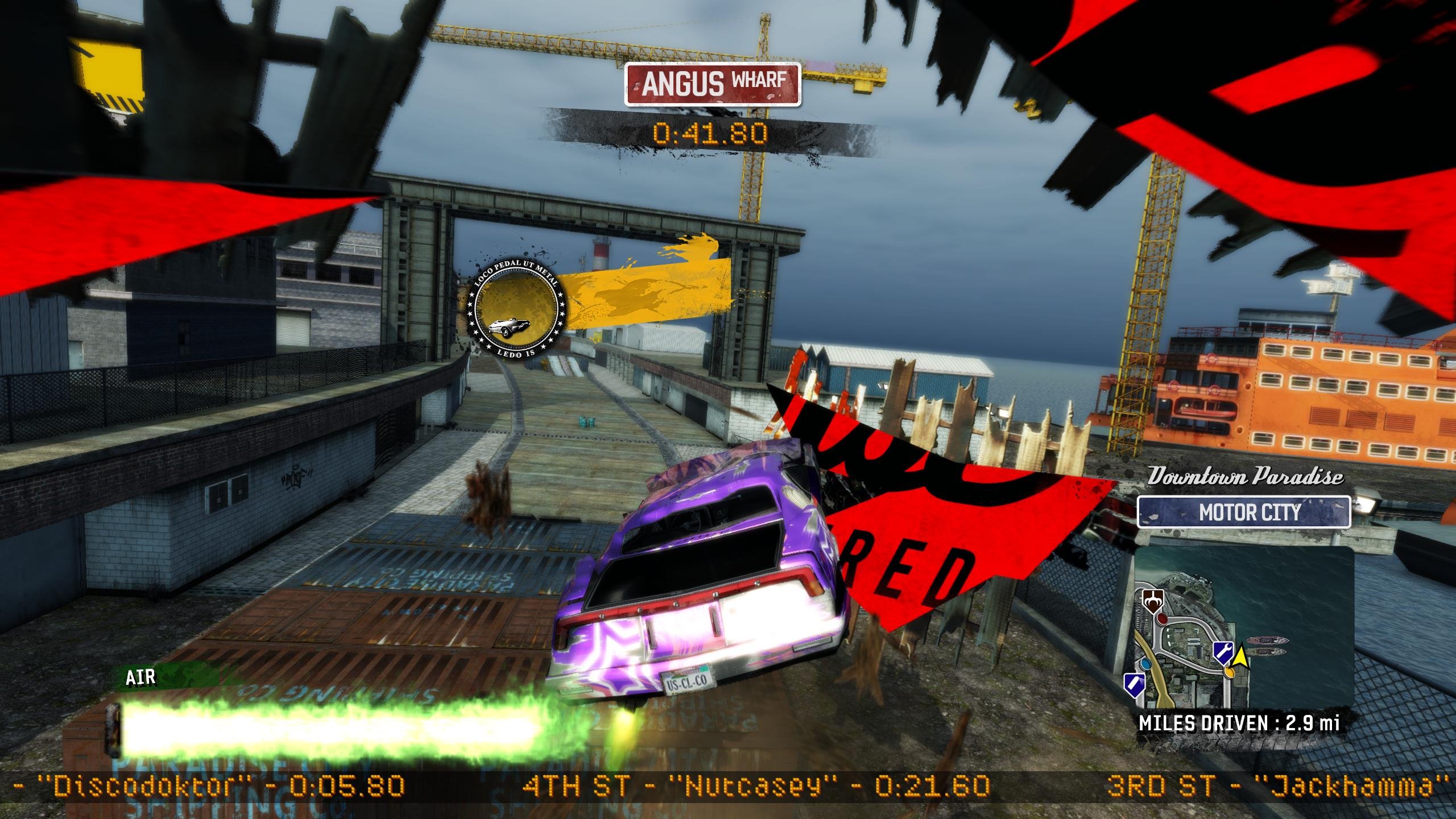 Yet, this is still Burnout Paradise, the best arcade racing game ever made. So arcade that it barely qualifies for the words "racing sim", with its cars that can bounce off barriers at 200mph, and its focus on smashing stuff over and above anything close to simulation. Which is entirely why I love it so much.

I love that to gain new cars, you have to fight them in the streets. They drive aggressively, you recognise them from the general traffic because of their madcap driving, and then to put them in your fleet you need to smash them off the road. It works just so well.

I love that in every race, there's no fixed route. This is about getting from one bit of the city to another, and if you know of a shortcut, or a preferred route, you can take it.

I love that it just does drift properly, with no fuss, no screaming and shouting about it.

I love that beyond the inane drivel from narrator Atomica, there's no story, no characters, no half-arsed godforsaken plot. 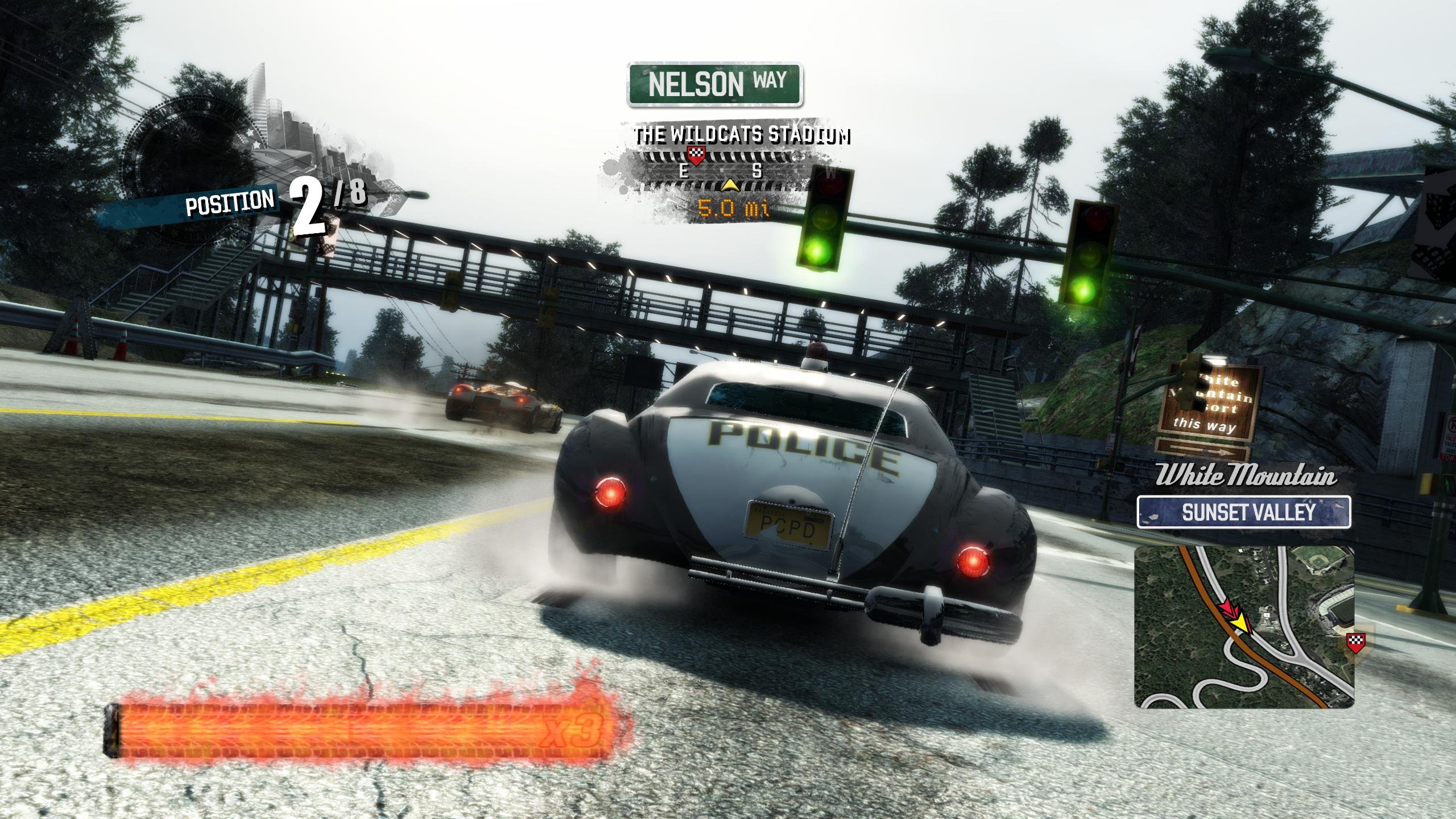 Let's expand on that last point. Criterion/Ghost Games (the bulk moved from one to the other) have been trying to recreate the magic of Burnout Paradise ever since, via the Need For Speed series. But each game, while clearly showing its ancestry in some form, has been ruined by ludicrous fiddle and fuss combined with some absolutely abysmal stories. Because the NFS series feels like it needs it, each time it's about a collection of moronic gobshites bleating cliches at one another in gruesomely acted and rendered cutscenes, incessantly spoiling any hope of fun that might be found in the occasional races. And Paradise just proves how completely unnecessary it is.

The closest this gets to a narrative is a driving license. That's really it. You start off with a learner's permit, and then by successfully completing races, stunt challenges, survival runs, etc, you level up to the next license grade, which comes with a few new cars and all the previous races (of which there are dozens) resetting to be taken at a more difficult level. Get to A and you've sort of won if you want to think of it that way. Although of course real aficionados know that it's getting all 400 yellow barriers that really counts.

I've written about this a bunch when celebrating Paradise over the years (and see the video above), but the reason I come back to this game at least once a year is to start over and just smash the yellow barriers and red billboards. The game is so gloriously silly that you don't really need to worry about winning races to upgrade cars, because just the starter vehicles can do pretty much everything. And in this build that's even less of a concern, as the included DLC means you've got super-powerful beasts from the off anyway. All I care about is smashing stuff, and it's every bit as satisfying as it ever was, now slightly higher res.

The game understands how this is to be celebrated, screeching across the whole screen about how many barriers out of 400 you've bopped already, recognising the awesomeness of every minor achievement. This remains unchanged, and thus the game remains essential. I'm not even kidding. 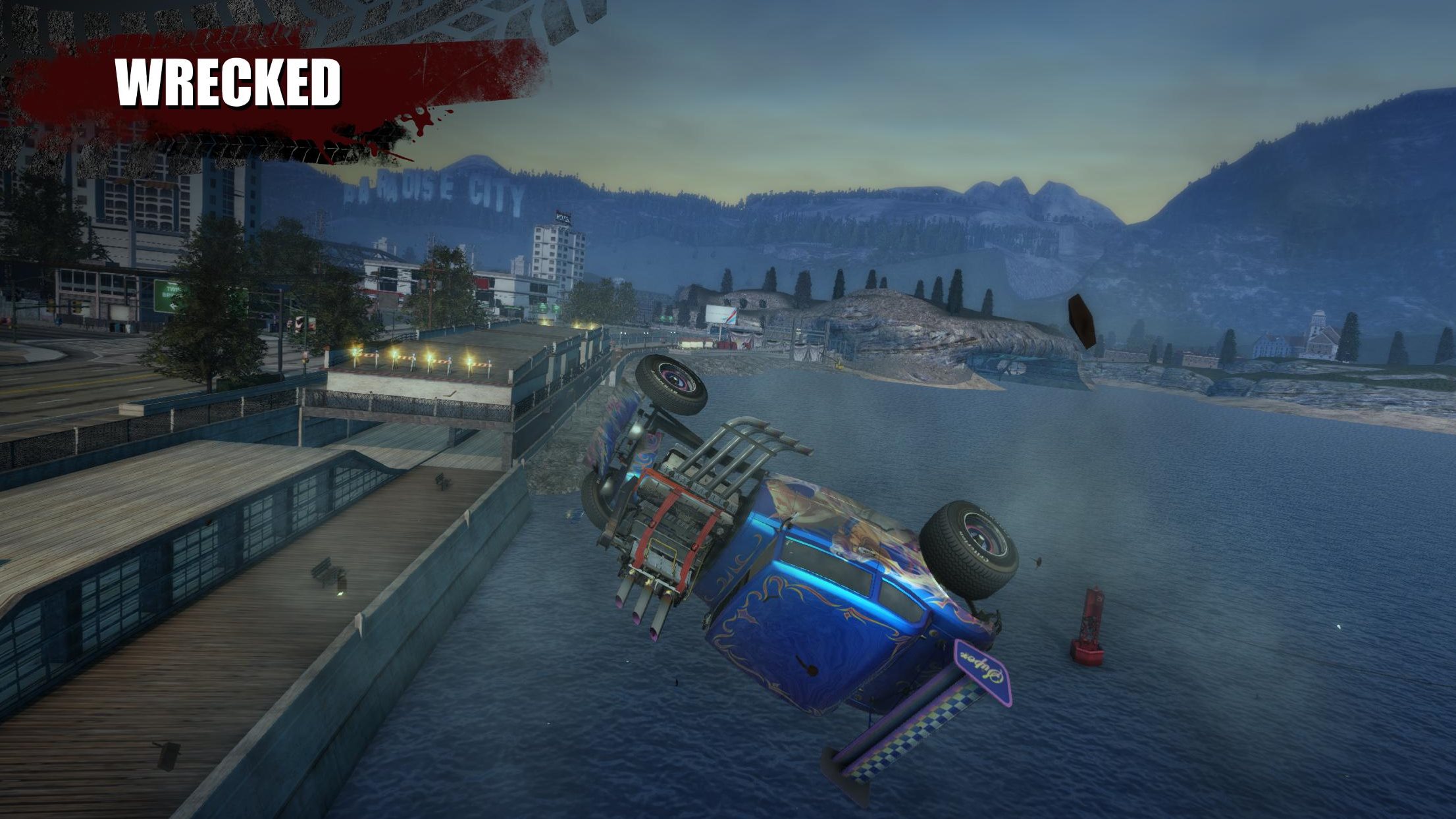 Yes, this is Burnout Paradise, with all its brilliance, all its flaws, and all its DLC and expansions, many of which the PC was previously denied. I've not yet poked at the multiplayer, but then this has only been on sale for a few hours - if it's as good as it used to be, it's amongst the best ever. The beginning is still as fun as a kick in the shin, but after that it just becomes a wondrous playground, and perhaps most crucially in light of the misery that is modern open world racers, one that just lets you get on with it. And now it's slightly prettier, and runs in a window! Hurrah!

PS. Because EA are just colossally stupid, this is currently only available on Origin. However, if you already own Burnout Paradise in there, there's an option to upgrade it to this new version for £4.50, which is an awful lot less than the full £18 a new copy will cost you (which itself is significantly less than the £35 it'd cost you on Xbox, but more than the £12 it's currently discounted to on PS4.)