If you click on a link and make a purchase we may receive a small commission. Read our editorial policy.
Developer: The Pixel Hunt, ARTE France, FIGS
Publisher: Playdius

"A game about Syrian refugees" has certain connotations, at least if you are not yourself a Syrian refugee. I expected sustained suffering, a maudlin and desperate tone, confusing cultural differences and a great deal of poetic misery. Which, well, probably says a few uncomfortable things about me, doesn't it? Because Bury Me, My Love, which plays out as a quasi-real-time text message conversation documenting one Syrian's dramatic attempt to reach safe harbour, isn't defined by any of those things.

It's just as much (if not more) about shoes and emojis and jokes and irrepressible optimism in the face of rising darkness.

Nour is seeking to leave her war-torn home in favour of a less dangerous life in Europe. Her husband Majd (the player character) stays behind, the pair hoping he can come join her once she has established a new life. As she catches planes, trains, boats and midnight vans, she tells you what's going on, sometimes asking for advice or decision-making, sometimes to vent at, but most of the time just as a beloved voice during a desperately difficult time. It's an interactive journal of her long and risky journey, the choices you make for her (and she makes plenty more of her own) leading her to different destinations and different eventual outcomes.

I should say now that Bury Me was originally designed to be played on a phone, where its aping of notifications, message timestamps and selfie-sharing better evokes the experience these characters would have had. This is a handheld portal to one another, every bleep or ding a heart-stopping promise that their increasingly distant connection has not yet been severed.

It all works fine on PC, but the illusion that it's a person, and not a piece of software, on the other end of the line is a little diminished. I ran it in a window, moving between it and my work, and told myself it was the desktop WhatsApp client, which helped a little. Whatever might have been lost between formats is incidental, because this is an important game. Important not because of its painfully timely subject matter, but of how it tells it.

This is a couple's chat, not a plea for help or understanding delivered to camera, or harrowing scenes seen as a sad-voiced celebrity asks you to donate just three pounds a month. Though it is of course punctuated by frightening events and mounting uncertainty, the more general tone is that of mutual in-jokes and brief arguments and little affections and exchanges about the entirely humdrum. 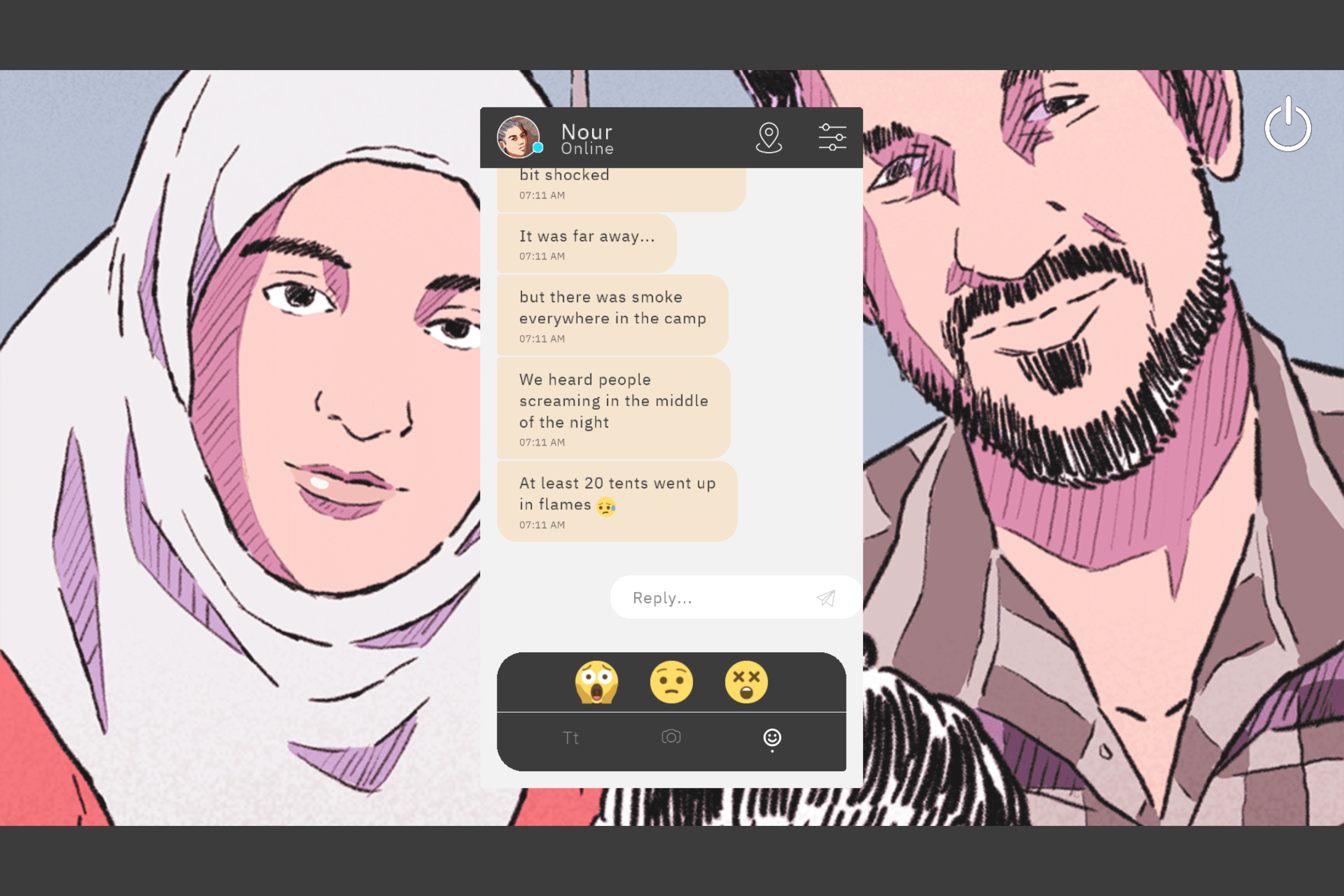 They fret about wi-fi signals and holes in shoes and finding plastic bags to keep money dry in, they laugh about snoring and dodgy beards and their boring habits, and they send crying, laughing, angry or shocked emojis when dramatic things happen. Abductions, ejections, camps, beatings, minefields. Those banal little yellow faces that we all send to each other about shopping or selfies or he said/she said, where other takes on the plight of a refugee might incline towards elaborate soliloquy.

I'll admit, I went into Bury Me expecting it to be overtly harrowing, but I found something far more effective. There are reasons for this beyond what, I imagine, was an effort to humanise the scenes we see on the news, and to provide a kinder counterpoint to the insidious efforts of certain public figures to make us think of invaders and parasites.

One is that Nour doesn't set out on her journey thinking of herself as a refugee. She thinks of herself as simply someone moving to another, less dangerous and less demolished country, with the right to get there, careful planning of her itinerary and the education to be a valuable resident once she arrives. 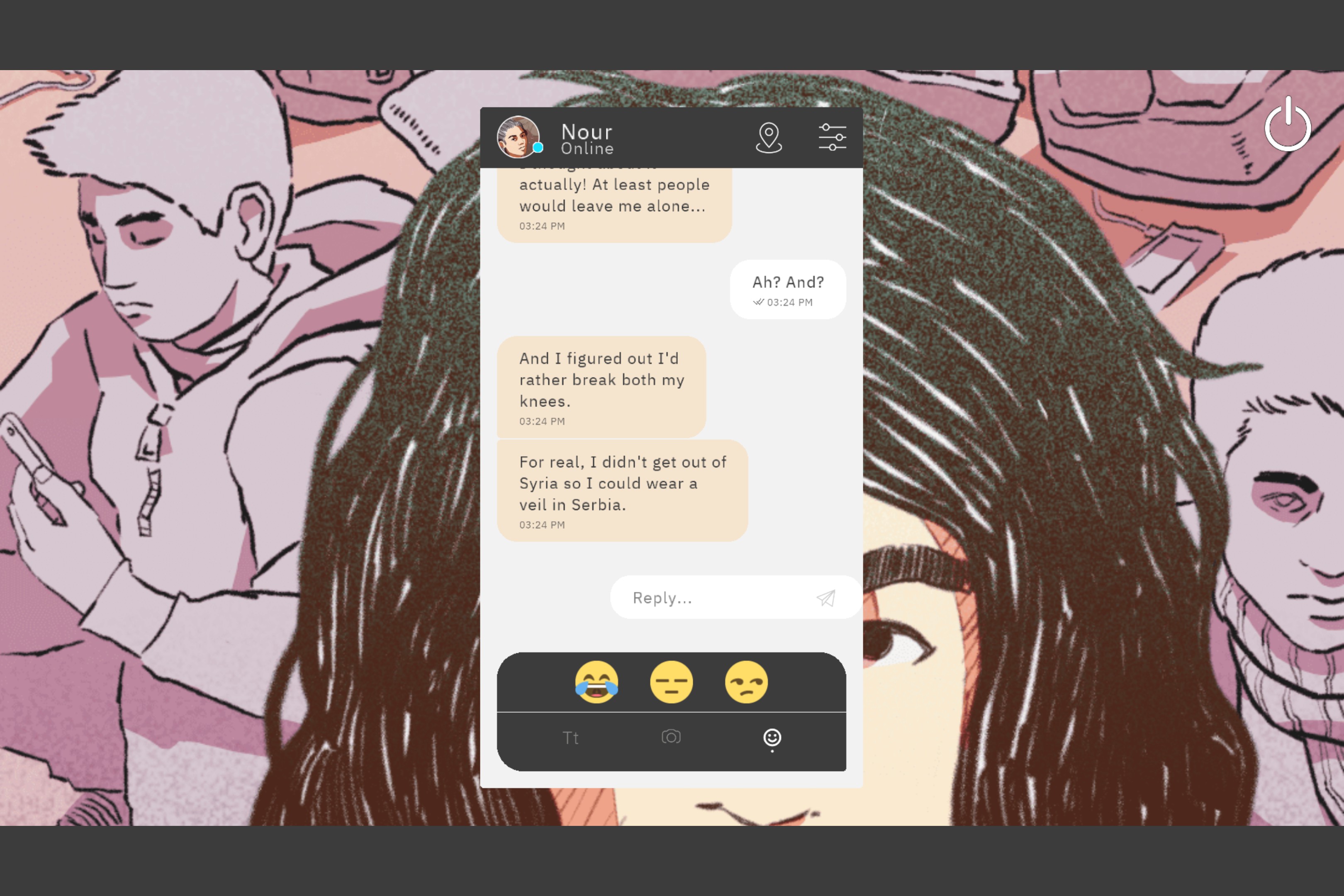 To start with, it's a matter of the taxi turning up on time, catching the right flight, having remembered to pack her phone charger. The trip - ostensibly to Germany - is a decision they've made before the game, so we're spared handwringing or exposition about the details and instead just given the situation. Nour needs to catch her flight, Majd is missing her already, but they're going to see each other real soon, right?

They are not, obviously. Bury Me arrives in different places depending on which replies you choose to send to Nour, but the throughline is that things go wrong, Nour hits obstacle after obstacle, winds up in all manner of different places in all manner of different, sometimes darker, circumstances, and the pair's earlier naivety that this was simply a matter of making connections and flashing a passport are rapidly and steadily demolished.

Another reason this is so effective is that Nour and Majd are not depicted as criminal masterminds. That is to say, they are not, somehow, experienced refugees who know all the tricks and exploits of crossing borders they're not supposed to, as certain places with certain agendas seek to make us believe of desperate people fleeing warzones. They are just normal people trying to figure out what to do next, when things keep going South, when Nour is yet again in a place where she knows no-one, doesn't speak the language, has almost no money left, may or may not be illegal, when the plane's full or the bridge is closed or the van didn't turn up.

This is where the format, a messaging app, really comes into its own. You, as Majd, don't get a clear impression or understanding of wherever Nour's fetched up and what she should do next, but instead you get her hastily-texted take on it, her reaction to it. A combination of emotional gut reaction and practical instinct (get away from here, enjoy this reprieve, follow that lead, take that risk) which somehow builds a sense of place, or at least of dilemma, more than I think a longer-winded format would have done. 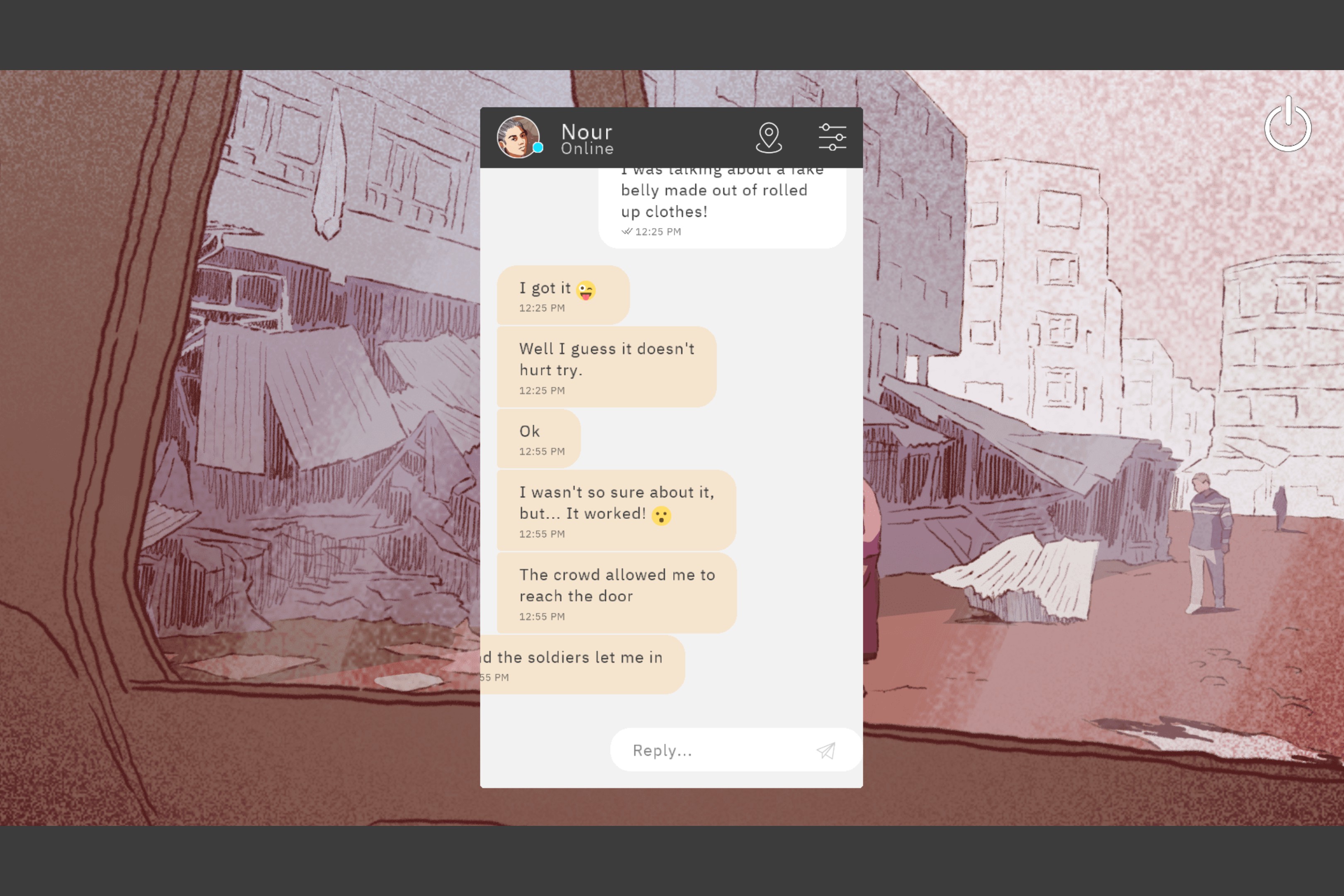 These moments of arrival into or attempted exit from a new place are where most of the decisions focus. Nour doesn't want to be told what to do, but she does want your perspective on things, or remote research on places and situations. Sometimes she'll do what you advise, sometimes she'll decide against it, sometimes she'll aggressively push back against didactic statements from someone who is not facing the same frightening situation she is.

Some of the decisions bite, sometimes the story (and Majd's characterisation) tells itself without any input from you for far too long, sometimes the canned lines you can choose from are too far flung from what you actually want to say, and sometimes your blood temperature drops by ten degrees because of the magnitude of the choice you need to make for someone you love. Should she steal that Italian woman's passport, should she sneak out of that camp, should she approach that police officer? 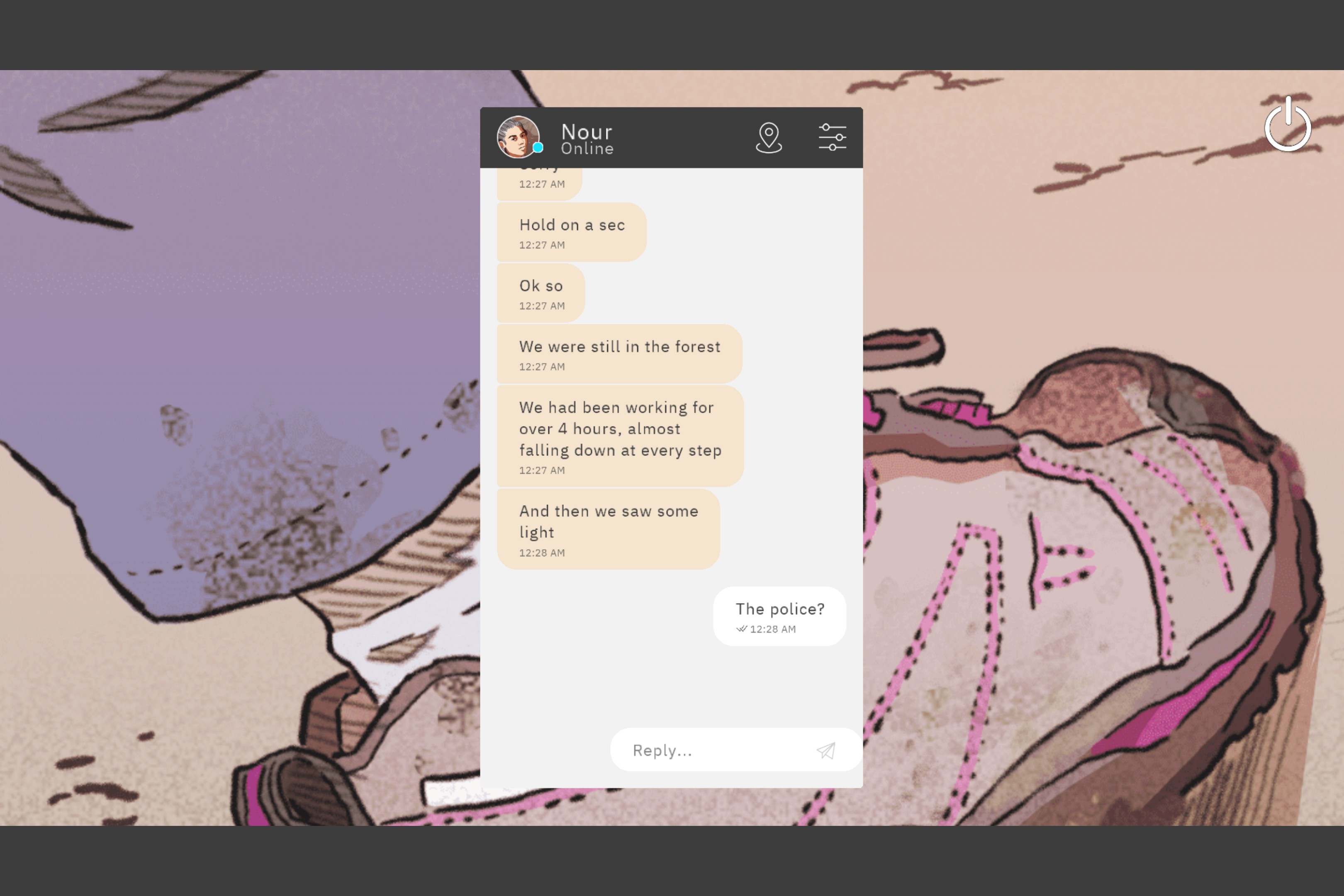 For all this, there are points where Bury Me falls down. One is context. For instance, Germany is always the plan, even when safe harbour in other places has been found, and the pair never, in my experience (I've not seen every fork) give reasons why staying in, say, Bulgaria or Hungary is unacceptable. I alt-tabbed out to do further research as to why they'd feel this way, which helped my understanding, but in these politically febrile times, I think Bury Me could do a better job of explaining why a Middle-eastern refugee making for a "bigger-name country" is not just a matter of feeling entitled to.

And that's a general thing. As part of its noble goal to avoid exposition, we're asked to take for granted that the couple already know all about, and have opinions all about, the political situation as regards migrants in any place Nour ends up. For this reason, entire nations wind up feeling like little-described waypoints on a map, which I think is a weakness.

So too are some climactic situations in which you get a voice message from Nour, earnest and in perfect English to her fellow Syrian. Up until that point, she's someone whose voice you've built up in your head from her written style and the feelings she shares, so it's jarring to suddenly hear something which shatters that image. Also: if they've been able to call all this time, if they've been missing each other so much, why are they only doing so now? It was easier to accept the gaminess of text-only conversation in English before this late curveball.

These are minor things, but slightly destabilising things. Not to the point that this is not a journey worth making. The intensity of the decisions, the mounting fear when things go wrong or days pass without hearing from your partner, the relief when a message comes, the joy of silliness in uncertain times, the dogged sense of hope even after a string of disasters. Bury Me, My Love isn't, first and foremost, a treaty about refugee-ism: it's a compelling and effective game about deciding what the hell to do next.