I stopped watching Game of Thrones around the start of season three, because there were too many people and I couldn’t remember who most of them were or why anything they did might be significant (broad exceptions: the dragon lady; the incest twins and their sandwich son; Jon Sner). I don’t really think Game of Thrones translates well to being a game of games, for similar reasons, but Reigns: Game of Thrones is good, because it’s a Reigns game with Game of Thrones elements, and not the other way around.

Reigns: GoT sidesteps having to deal with canon and non-canon consequences by using the fire visions of Melisandre be a framing device for “what if this person was the ruler?” This unlocks off-piste possibilities and gives you the pick of seven favourite characters and one dude I don’t remember at all. The ultimate goal is to survive the winter. My ultimate goal is figuring out who everyone is based only on the context this game provides. 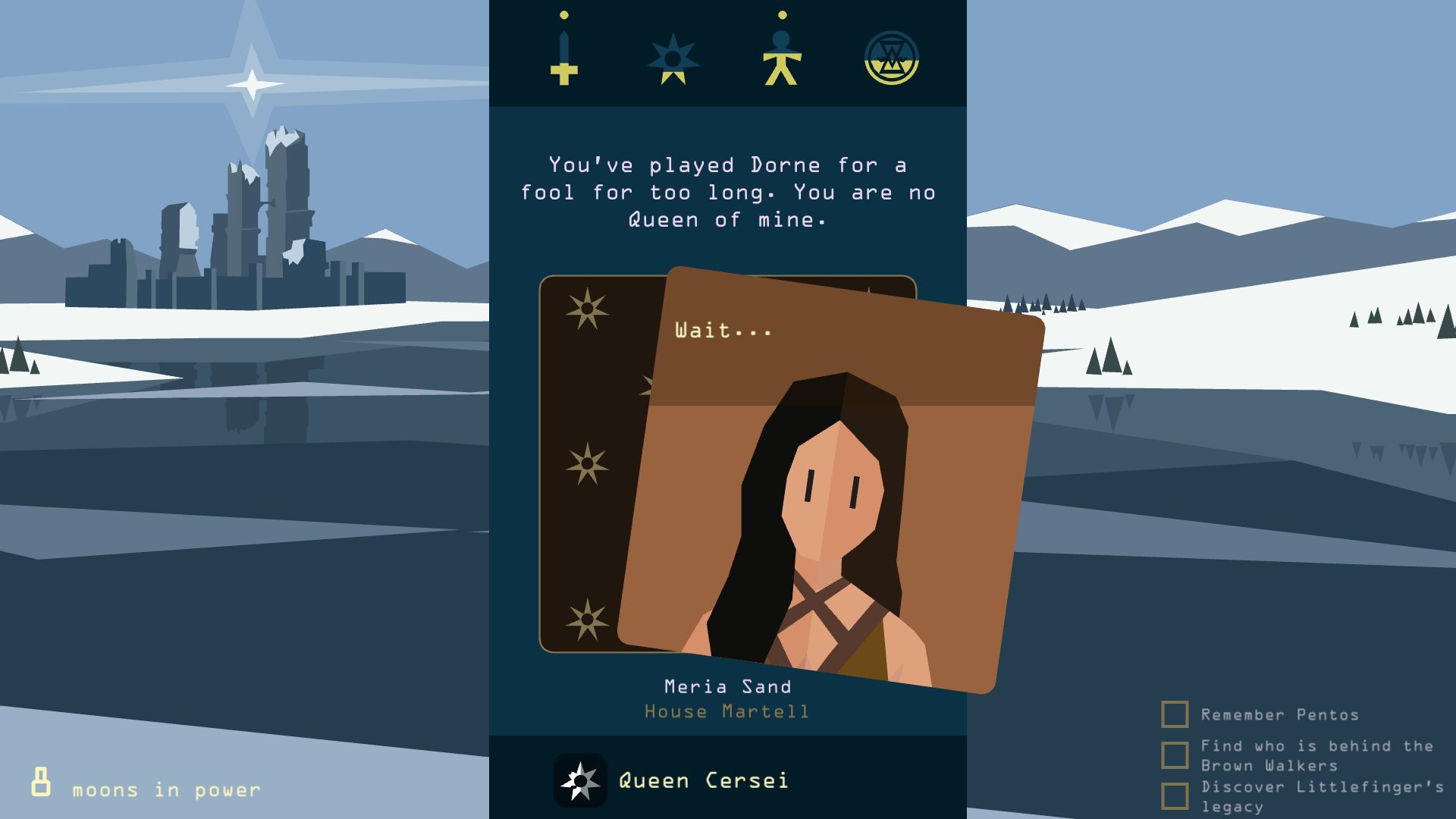 The thing is, this game (and article) probably has a lot of spoilers if you haven’t watched the latest season of the show, but I also don’t know how to distinguish the most recent spoilers from ones that happened literally years ago. For instance, all of Cersei’s Jonathan Warburton-esque children are dead. This could be old news or a massive thing. I don’t know. I have no way to tell except Googling, and that would be cheating. There are also references to the War of the Five Kings. At my last count there were about two, maximum. My summary of Game of Thrones at large from playing this game is that everyone who isn’t dead is either angry at one another or are having sex. Sometimes both. There is no middle ground. Furious snowmen advance to destroy the world while the humans are thus distracted.

Basically the world of Game of Thrones is a confusing and upsetting place for me, so shout out to the devs for making the game fun despite that. Each character has a different backdrop depending on (I assume) their personality and history, and unique interactions amongst the cards. There are plenty of secrets to winkle out. A cat to one character is more than a cat to another. But to me they are all nobody.

Cersei has a cool short haircut now, and basically nothing else. She sits on her throne utterly alone; everyone left standing hates her, including her boy-toy Jaime, but she hates them back even more. The hatred gives her energy. It doesn't matter if the white walkers get her, because she is already an ice queen. Cersei's every look is a bitchslap and she has a giant perambulatory suit of armour that crushes people's windpipes at her command. As well as being an unhealthy way to carry out interpersonal relationships, it is logistically quite difficult to play the game when the entire staff of your court wants to leave. Cersei’s aesthetic is Disney Villain And Loving It. She is probably my favourite. 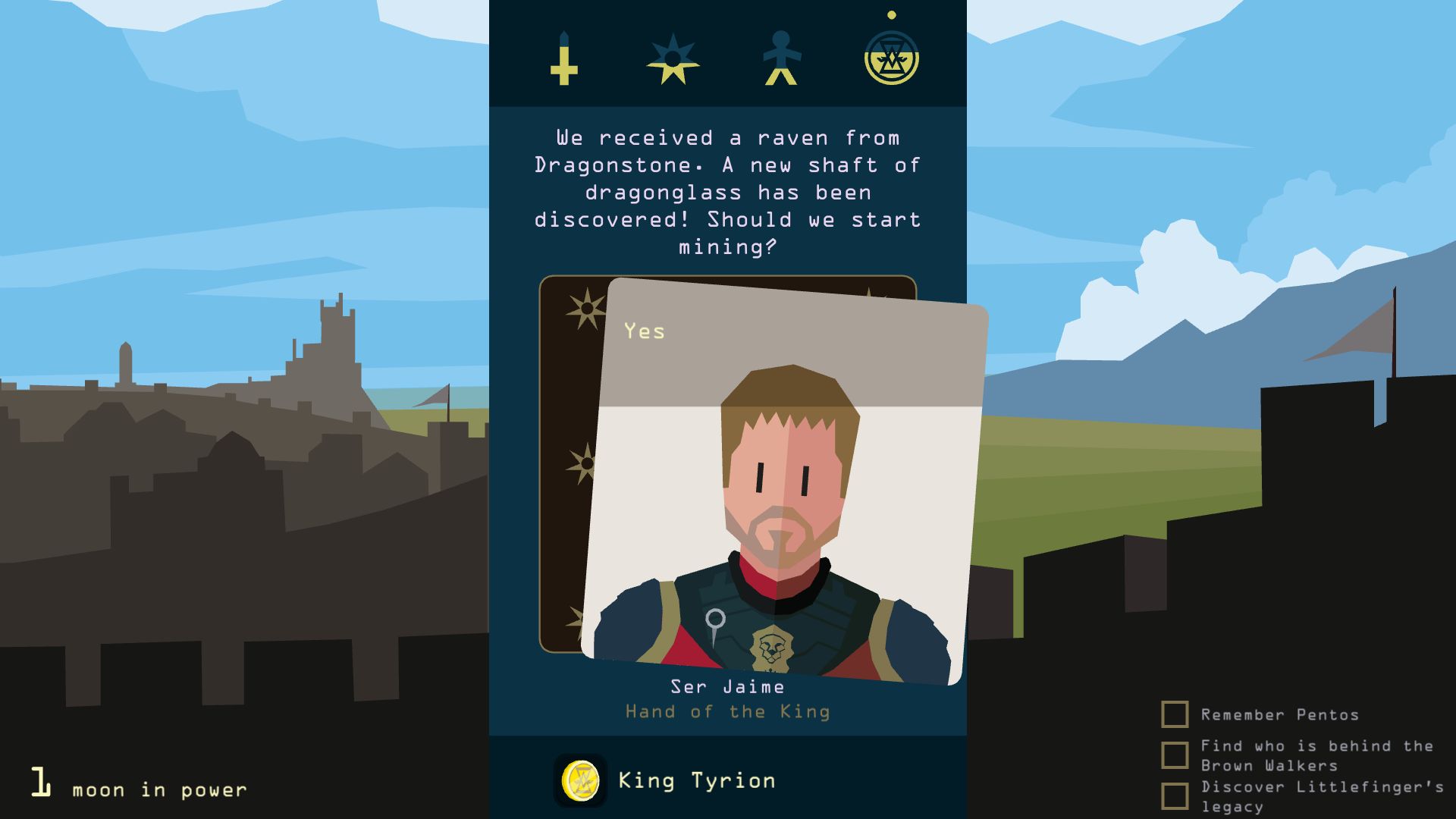 Jamie has clearly spent some time having odd couple, we’re-different-but-gosh-darn-it-I-respect-you adventures with Tyrion. Despite the high-jinks and comedic misunderstandings, at the end of the day, they only have each other. They probably owned a pub that was a front for a detective agency. I would pay good money for someone to make a spin-off game where they’re two mismatched buddy cops solving murders, and every murder was done by a dragon. They wear fedora hats and old timey dusters. HBO, I am available.

Tyrion is alive because he’s the only one people seem to actually like. This is fair, because from what I remember the character only ever wanted to be left alone and get hammered. This is still the case, but there is an army of white monsters that has to be dealt with first. Big Mood for 2018, right? RIGHT??? Right.

Daenerys has dragons as a defining feature. If someone tries to do a coup on her in this game, she can just wave a dragon in their direction and they think “actually maybe I won’t do a coup just now.” She is preoccupied with helping Jon Sner a lot, who she definitely should not be fucking if history has taught us anything. Game of Thrones is a nightmare. 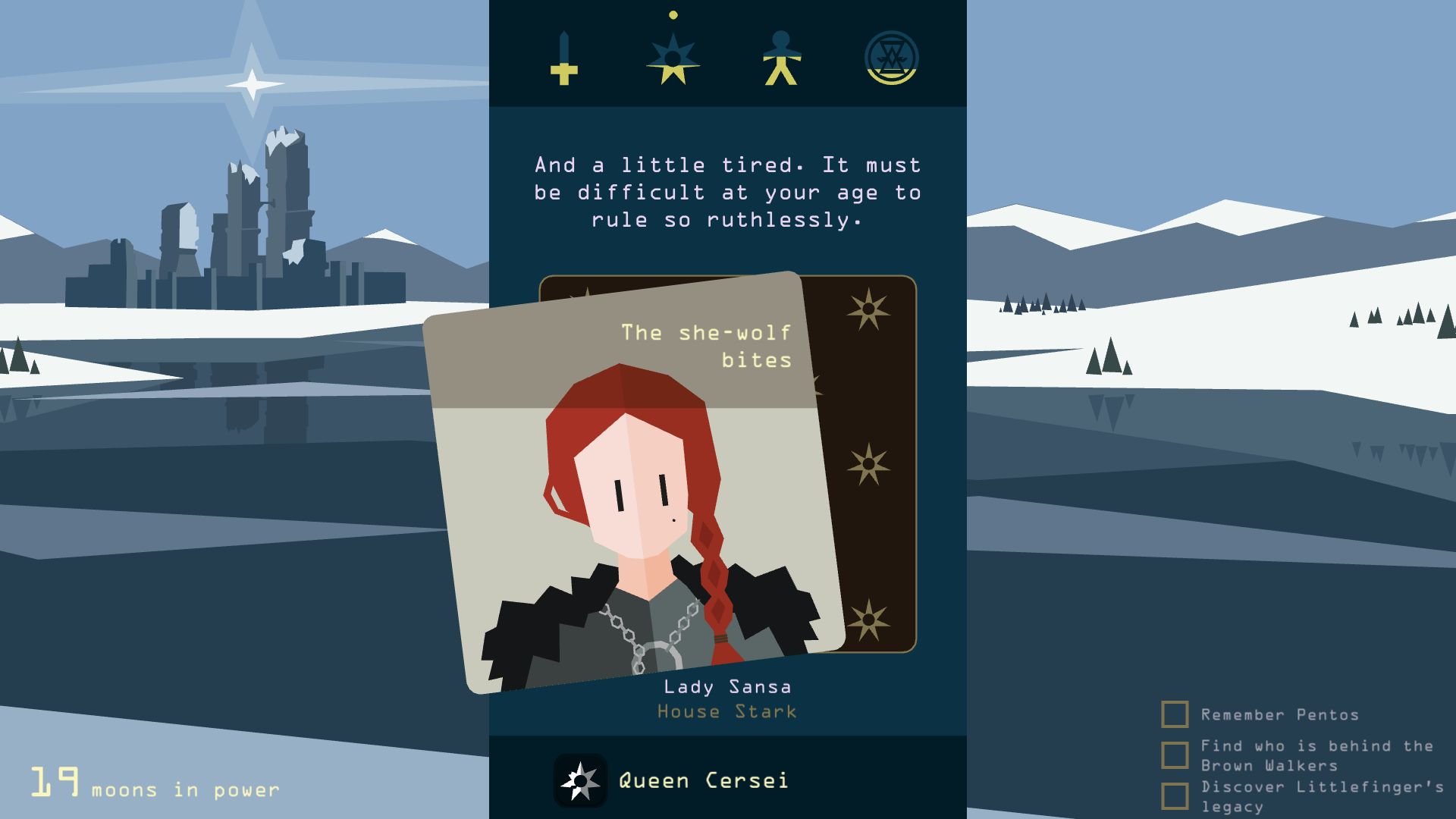 Sansa is one of the Starks. They are grim and northern and have wolves, except not any more. Sansa has been married to a lot of people, but didn’t want to marry any of them. Her eyes are sad, but steeled by a probably desperate past. Her speciality is forgiving people graciously but also taking no shit, and then whipping her side-pony back with utter contempt. At some point she was put in charge of Winterfell, which means I have entirely lost track of how many Starks may or may not be dead. Also what has happened to Lily Allen’s brother?

Jon Sner is also a Stark. Or is he??!?! When you’re not playing as him he is sometimes referred to as the King in the North, but when I actually moved him to Winterfell from King’s Landing everyone got cross and was like “Why? You need to be at King’s Landing!” Therefore calling him King in the North is a grossly confusing misnomer and I will have them all, and him, under the Trade Descriptions Act.

$:’( ← Jon Sner emote. He has curly hair and is sad all the time, no matter what. The actor who plays him lives near me, and my housemates keep seeing him in this place we all go to for breakfast sometimes. I haven’t yet, though. 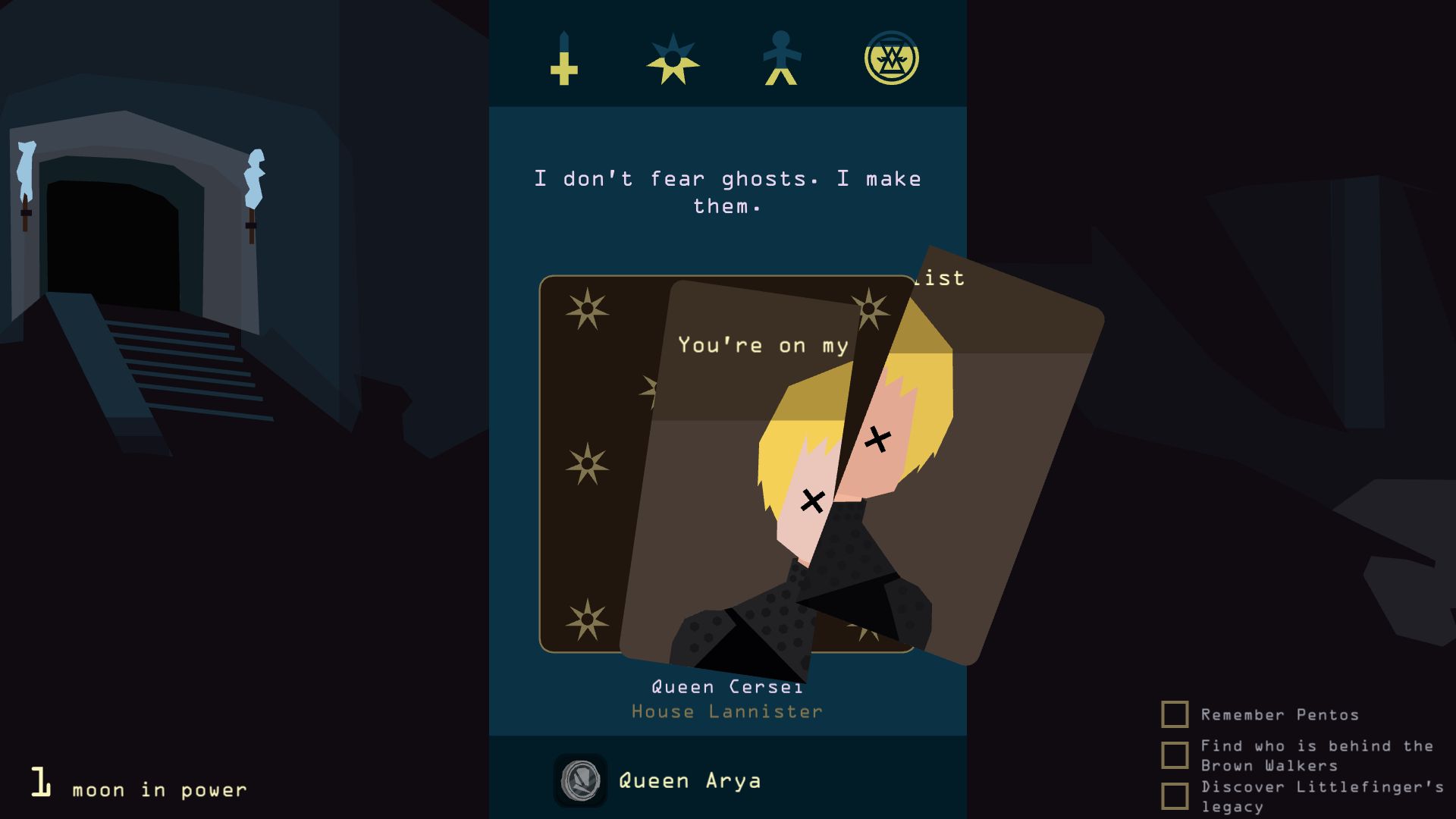 Arya is another Stark. I remember her learning how to sword fight, the better to attack conventional gender roles. Arya is now a cold blooded murdering hard-ass. She has pivoted to wearing people’s faces like a tiny, angry version of that dude from the Texas Chainsaw Massacre. Her rule always starts with her sneaking into Cersei’s room to murder her, and then pretend to be her. I imagine that it’s a really bad disguise, because you can’t just cut someone’s face off and put it on and think that works. That doesn’t work. All the court must feel sorry for her and be like “Sure, we’ll do that Cersei,” and Arya is like “Teehee, my plan is working perfectly! No one suspects a thing!” while her face mask rots and falls apart. I’d do what she said, to be fair, because a woman that cuts faces off, that woman should be obeyed.

Also she mentioned someone or thing called Hot Pie, and I think I should probably know who that is or was. Without further context I assume it’s either her riot grrrl band or Roller Derby team.

Is a blacksmith but apparently a really important one. He is best friends with Arya, from his years helping out as the referee at Hot Pie’s derbies. 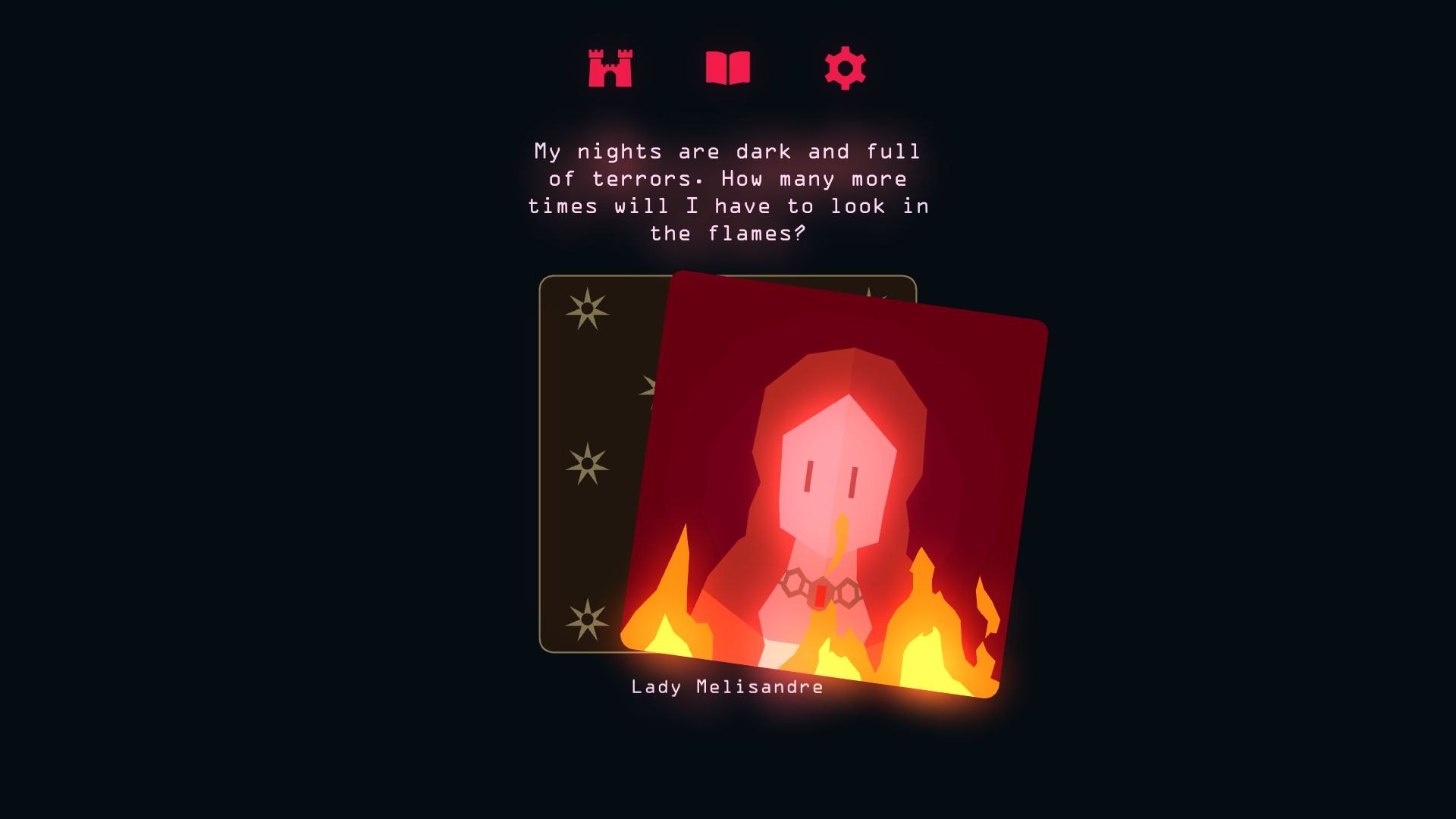 This woman gave birth to a man made of fire, and now she is some kind of prophet. This whole series is ridiculous. The game is good, though.

Disclosure: Leigh Alexander is a writer for Reigns: Game of Thrones, and she used to contribute to RPS. Before my time, though, so you've got nothin' on me.