There are two things a miniaturised version of gaming-centric 80s home computer the Commodore 64 needs to do above all else: 1) have a working keyboard 2) have a really good joystick.

TheC64 Mini is, clearly, following the Nintendo-led recent trend of recreating vintage gaming hardware at a smaller scale, with more universal connections and a load of on-board software instead of all that messy cartridge/disc swapping business, plus quality of life improvements to the likes of load times and savegames. Basically, the approaching middle-aged can hang onto treasured relics of their childhoods without taking up quite so much cupboard space or requiring quite so many cable adapters in the process.

In this case, we're looking at a pint-sized remake of the Commodore 64, a huge deal in personal computers between 1982 and 1994, both as a games and productivity machine, and as a home programming machine. Though what we now call the PC was one of several computing devices that eventually killed off the C64, Commodore's 8-bit machine comprises several key pages in the history of PC gaming. 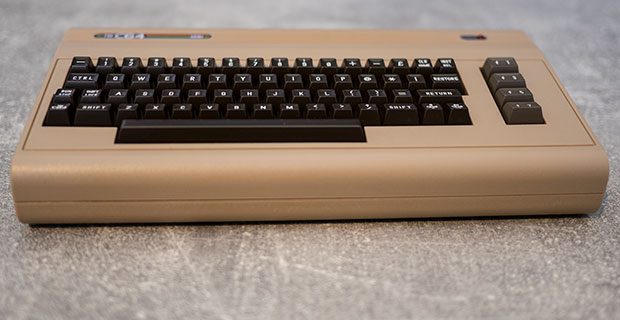 The Mini's cute to look at, its brown tones are highly 80s-evocative if you're of a certain age, but on the other hand, as a physical object it's just a hollow-feeling plastic brick. In terms of function, it apes the key ideas used by Nintendo's hugely popular NES and SNES Mini Classics. As well as the size reduction, housed along the edges of its 8-inch plastic frame are HDMI and USB ports, meaning the C64 Mini is effectively plug'n'play on any modern TV or monitor. It 'only' outputs at 720p - already a far cry from the original C64 maximum resolution of 320×200 pixels - but this upscales perfectly well even on a 4K screen.

Beyond that, Nintendo has it a tad easier, and not just because it has an infinite fortune to call upon for R&D. A NES or SNES never had to do anything more than run games, while their controllers share many of the design fundamentals still used by today's gamepads. 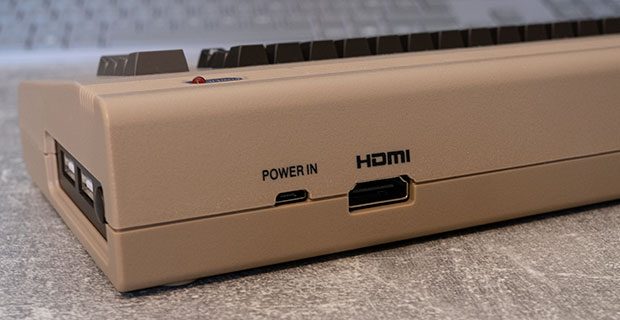 The C64, by contrast, was/is a whole computer, with an operating system, an enormous and barely-regulated software library that sprawls far beyond the forms and functions of a console, and a chunky joystick that is iconic but built around very different principles to a 21st century game controller. Also, yeah, the C64 famously had a keyboard mounted into its top. Requires a few more micro-switches than a six-button gamepad does, that.

Which is probably why the C64 Mini's keyboard is a single piece of moulded, immovable brown plastic which, tragically, is purely decorative. If you want to type - be it something as simple as entering your name in one of the many games which require it before you can play, or something as complex as writing your own code in BASIC - you'll either need to hook up an external keyboard via USB, or use the reliably slow and frustrating on-screen virtual keyboard. Boo! Boo!

The official line is that a teeny-tiny keyboard is unfeasible on a beige brick that's only 20cm wide, though that never stopped Blackberry or Psion. I'm not pretending a full board with keys the size of half a Tic-Tac would have been terribly usable, but the first thing anyone I've shown this gizmo to has done is start tapping at them, followed immediately by a disappointed frown. There are some things you've just gotta play to the crowd on, no matter how silly, and this was very much one of them. 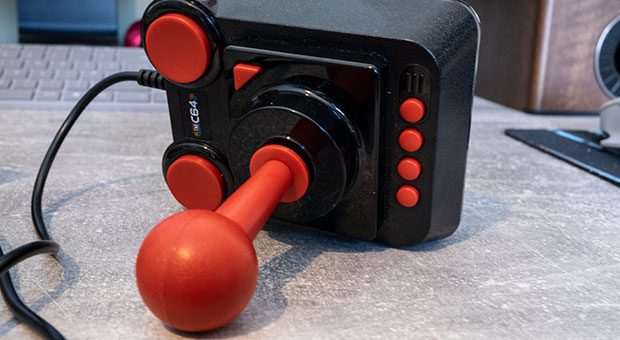 Redemption could have come in the form of a perfect joystick, but this turns out to be an even more critical stumble on the part of C64 Mini firm Retro Games Ltd. The black square/red shaft/two giant buttons form factor certainly looks the part in terms of evoking one of the most beloved gaming peripherals of the 1980s, while fuzzy memory may cause you to initially presume that a C64 joystick was as horrible to use in 1985 as it is in 2018.

It wasn't. Sure, ergonomics weren't exactly a key concern back then, so you were forced to either grip the cuboid base uncomfortably or try to pin it to the desk with whichever hand was operating the handily gigantic buttons. These are unnatural postures that do make a hand ache in a way the curves and tapers of, say, an Xbox pad, do not. However, the original sticks were at least precise, which cannot be said of the C64 Mini's bundled black'n'red controller, which sadly eschews micro-switches in favour of a cheaper approach.

I'll say a bit more about the included games in a minute, but something many of them share - as did so many games of the era - is that they don't suffer fools gladly. Any failure is often met with instant 'Game Over' punishment, and as such a controller with true precision is vital. You need to know that your character will move up when you pull the stick up, you need to be able to find a diagonal without thinking about it, you need to not have to try to jump three times before your character actually jumps. In other words, playing the games is far more miserable than was ever intended. 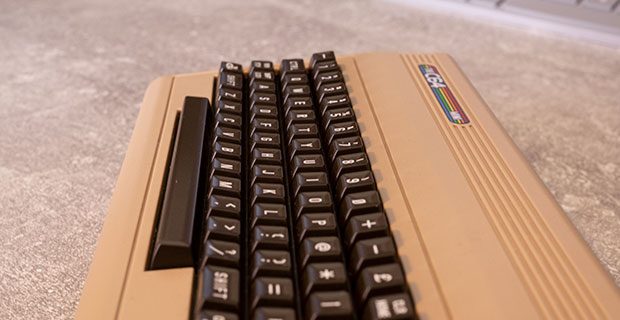 I have read some commentary that the C64 Mini additionally suffers from software-based input lag that could be addressed by a later firmware update, but while that might mitigate matters, it's not going to solve the root problem that the joystick is trash. It's overly stiff and poor to respond, it feels like it came from a pound shop, and any nostalgic pleasure in holding it swiftly melts into exasperation. Even selecting a game from the roster on the main menu is a slog.

My initial thought upon opening the box was dismay that the C64 Mini only ships with one controller, as opposed to the Ninty Minis' sensibly couch multiplayer-friendly two, but I suspect two pieces of barely-usable garbage would have been even more insulting. The C64 Mini's USB ports do mean it can theoretically support an array of better controllers, including USB adaptors for vintage C64 kit, but in practice it's a mixed bag.

Neither an Xbone controller or Switch Pro would work at all, while a PS4 pad did but the button-mapping was all over the place, to the point of unplayability. I don't doubt that there's stuff out there which will work, and I'm sure firmware updates can increase the range of 'em, but it's sad to be in a situation where finding something else is pretty much essential. 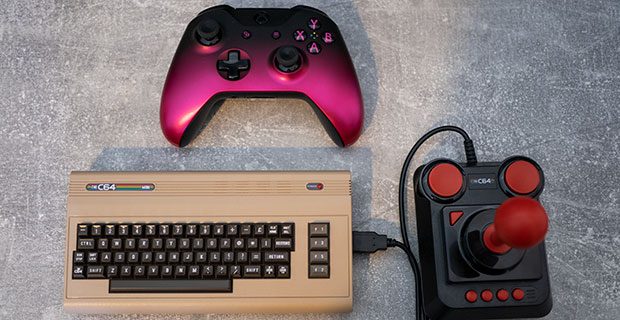 Onto the games. It seems desperately unlikely that anyone interested in this isn't already versed in the ways of 80s home computer gaming, but I guess it's worth saying that certain expectations should be left at the door. Don't expect even the polish or scale of a somewhat contemporaneous NES game - the 64 scene was one of gaming's first Wild Wests, with few fixed ideas of what a videogame should be, and that's reflected in the breadth and scrappiness of of the 64 game roms pre-installed on the Mini.

You can sideload more games - of which there are tens of thousands - via USB, but right now the Mini can only recognise one ROM at once, requiring dreary file-pasting and renaming on a PC every time you want to try something else. Like the keyboard and joystick howlers, this is a remarkable failure to read the room, but the makers at least claim that a future firmware update will address it. 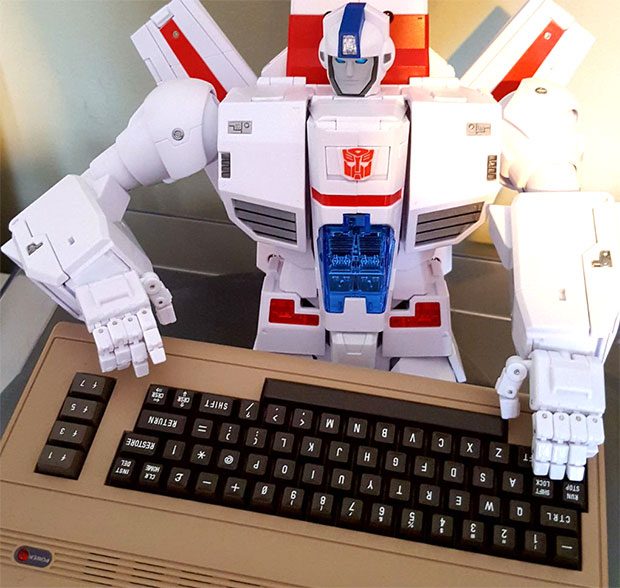 64 games is plenty to be getting along with, at least, and there are a fair few classics of the scene in there, such as Paradroid, Speedball 2, School Daze, California Games and Boulder Dash. The absence of legendary fare including Turrican, The Great Giana Sisters, The Last Ninja, International Karate + and Bubble Bobble is a real shame, though rights issues are at least easier to understand for big-publisher offerings such as Maniac Mansion, Wasteland, Ultima, Elite and Pirates! It's all out there somewhere, of course, but you'll want a USB keyboard and that promised multi-ROM firmware update if you want to play it all in earnest.

Of what's there, the highlight for me has been the likes of California Games, Winter Games and Summer Games, a loose collective of unofficial Olympics titles that fall into their own strange but characterful space in between simulation and rhythm action, while also being nothing at all like either. They're so unlike today's sports games, but their relative simplicity, mechanical nature and total lack of forgiveness somehow makes them feel more apt than does the excess and fluidity of a modern offering. 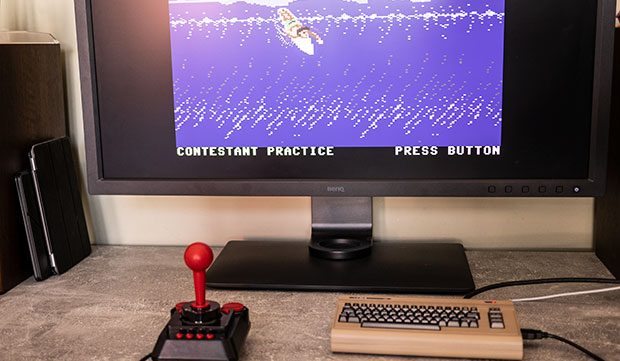 Take the surfing in California Games, a side-on affair which tells you absolutely nothing about how to play and which has no hesitation in basically drowning you within two seconds of the game starting. Throw yourself against those rocks a few times and you'll start to pick up on its rhythms. Do it a few times more and you might even start to be half decent at it. It feels like mastering something, gradually, not like the indulgence we are now so used to from games, and there's a true thrill to that, despite the pain.

This is not to say that I necessarily feel anything on the C64 is better than what we get today - if anything, most of it now feels too crude to enjoy, unless you're a mega-fan - but it's definitely fascinating to revisit a time and place before genre lines were laid down, and before the glossy standards of Nintendo and Sega.

Still, they, together with the poor joystick and missing keyboard, play into a general unease that the C64 Mini is a novelty item in the way that the highly playable SNES Mini is not. These are games I'll nose at briefly, from curiosity and nostalgia, but there's almost nothing I'd ever see through, if I'm being honest. The brown brick certainly charms the part of me that spent happy time with the original C64 in the late-80s, but, due to the horror-joystick, need for a keyboard and fussy ROM sideloading, if I really wanted to fall down a retro-hole, I'd have a much better time running an emulator on my PC. By contrast, the inclusion of BASIC for DIY programming is a lovely (and necessary) touch, but it's just not the same on an external keyboard. 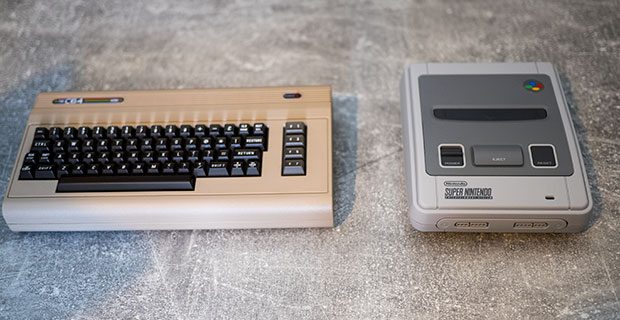 When I placed the TheC64 Mini alongside my SNES Mini to take photos for this piece, an itch I know all too well began at the back of my skull - the terrible urge of the collector. "I've got two of these cute little guys, I've got to get the rest now, or..." I was able to stamp that down, but those with more shelf space than me will likely indulge in creating their own quarter-size retro museum. Though its ease and speed of use is breathtaking to anyone who suffered through the CRTs and tapes of yesteryear, really that's what the C64 Mini is for - display rather than play.