If you click on a link and make a purchase we may receive a small commission. Read our editorial policy.
Can’t Stop Playing is our monthly celebration of a game we're loving. This time, we are transfixed by the many facets of the ambitious, dense and extraordinary cop RPG Disco Elysium. Watch out for more articles on it throughout the month.

Don't come any closer, pal. I've got a gun. Oh wait, maybe I don't, because I pawned it when I was extremely drunk, and I didn't do a deal with the corrupt union boss to get it back. Oh dear, now a voice in my head that says it's Electrochemistry is trying to convince me to get drunk. I must be in bleak but lovely RPG Disco Elysium.

Disco Elysium should not, logically, exist. A group of artists from Estonia banded together and spent five years making a detective RPG, set in and around one city district, in an alternate world where post-communism collides with post-disco. It's proudly inspired by sacred cows of PC gaming like the original Fallout, and Planescape: Torment, but it doesn't slaughter your best bovine pals. No, it wheels out it's own prize heifer and is like "Look at this mad sonnovuhbitch." And also the cow is wearing an ushanka, probably.

Disco Elysium ain't yer mama's RPG. The skill system is represented as a cacophony of different voices, louder in your head the more skill points you've given them. In other words, the better you are at punching things, the more you will want to punch them -- and you will also constantly find yourself having conversations with the punching impulse. Or with your necktie. Or a dead body. 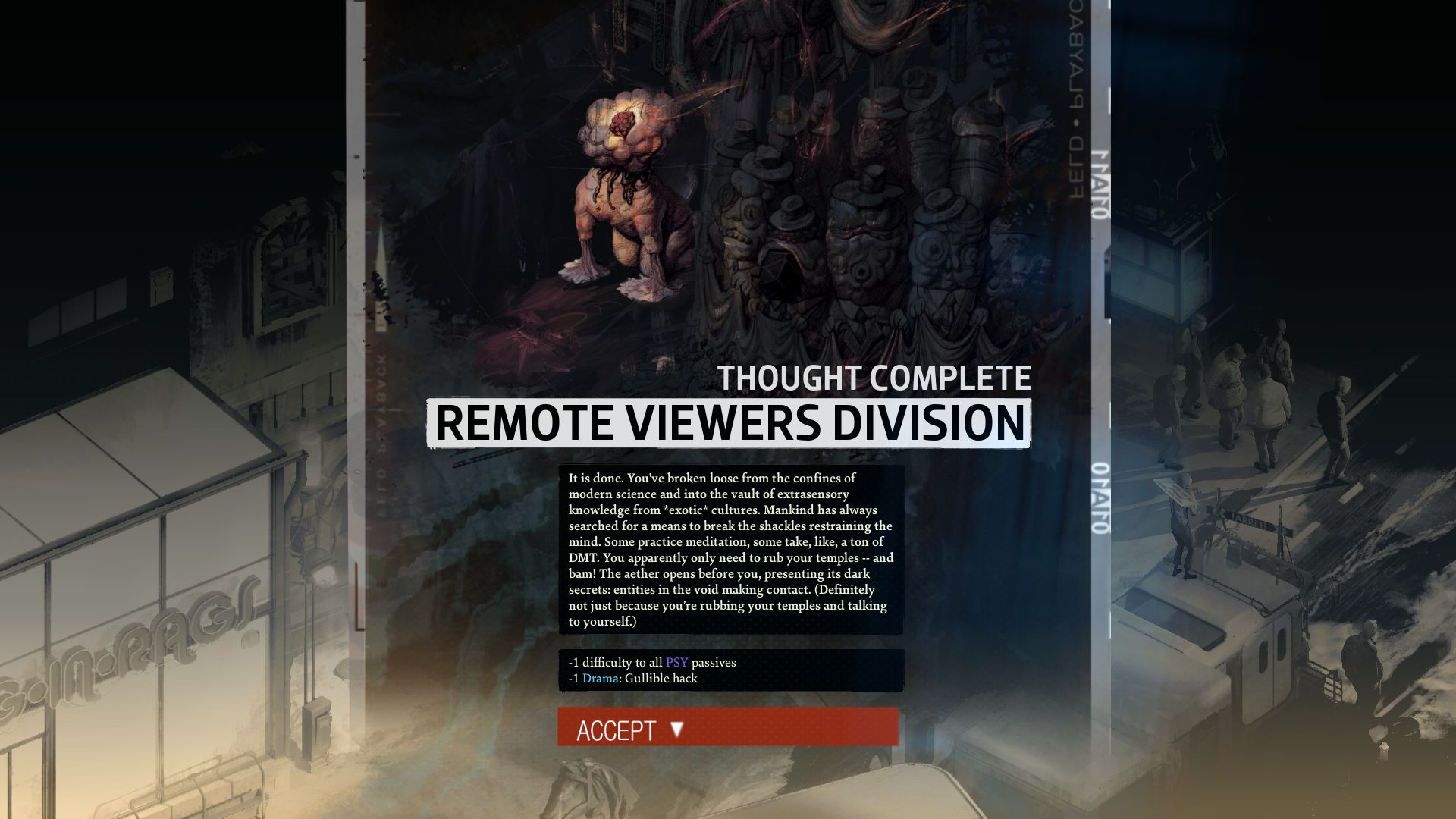 It's also a very holistic game. Everything that happens matters, or at least feels like it does, which makes conversations seem impossibly weighty. Even more so because the city block you're in is claustrophobic in more ways than one, and is existing on a knife edge, with different political and economic interests pulling it on either side.

I reviewed Disco Elysium, and I really like it, but I find it hard to articulate my thoughts about it. I, frankly, can't get my head around large swathes of it. It's a game that says and does a lot. About politics, economics, sociology, class. And disco. And Dungeons & Dragons. Matt grappled with some of the philosophy. We've barely even begun. It has layers. Liek onyon.

It feels destined to be one of those Significant with a capital S PC games, for good or ill. My Inland Empire is telling me we should write more about it. Stay tuned for that.