If you click on a link and make a purchase we may receive a small commission. Read our editorial policy.
Can’t Stop Playing is our monthly celebration of a game we're loving. This time we're weaving a narrative tapestry in the character-led tactical RPG Wildermyth. Watch out for more articles on it throughout the month.

It's good to know that the rest of RPS will play anything if I call them "cowards" enough. Kicking off 2020 with a strong start, the game we Can't Stop Playing this January is Wildermyth.

Three farmers defend their village from invading monsters. They go on to travel the land, looking for the source of the invasion. It's difficult not to boil it down to that, and that is very deliberate. This wonderful turn-based drama mine is proof that the power of a story is in its telling, not its base elements.

From that most basic of hooks, this turn based tactical RPG tells dozens of stories. Each character is initially a random assortment of faces, hairstyles, and names, with a couple of personality traits. The romantic coward, perhaps, or the greedy leader. They will quickly become far more to you, as their travels and battles kick off and advance subplots that bring them to life.

Your greedy leader finds a fancy gemstone set in a pedestal. It's up to you whether they'll try to pry it out. The bandit who joined you to seek atonement when you put her crooked gang out of business suddenly, darkly walks off on her own instead of entering a tavern that she clearly recognises. Does your jovial mystic demand an explanation, or respect her independence? "Put your arm in me," whispers a fire to your warrior. What a stupid idea. Let's do it.

Time passes as you travel, fighting and exploring and clearing the world of corruption. Monsters become stronger, and the world more damaged by their spread. Your party will age with them, acquire better equipment and gain new fighting powers. Should they survive a whole chapter, they'll earn a period of peace, when they'll pursue their own interests, perhaps falling in love, taking up painting, or even retiring. 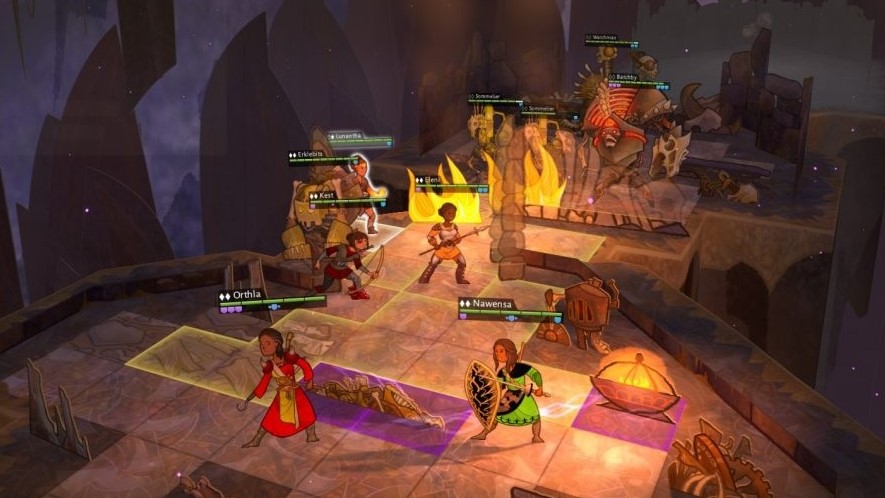 Most of these decisions will have consequences. All of them will breathe life into your story. And many of them will contextualise, and directly change the battles you fight, and the way you fight them. Battles are short and small scale, utilising the fairly standard XCOM-ish two actions system, but even the most colourful life is fragile and could be ended with one or two blows. Even death is often your choice - should a character lose all their hit points, you can choose to sacrifice their limb instead, or let them die to protect their friends, granting an armour bonus to everyone else for the rest of that fight. You might even surprise yourself by killing off a favourite because it feels like they'd gladly die if it meant taking a big scary monster with them. On paper, two warriors might be the same, but every time you play Wildermyth, those paper cutouts totting around the board become far more than a class or set of statistics.

I've already enthused about it several times, precisely because it's moreish enough to consume an entire week off, and one of those where your words fall over each other as you try to talk about everything it gets right at once. You can expect more posts about this gem over the coming month.