If you click on a link and make a purchase we may receive a small commission. Read our editorial policy.
Can’t Stop Playing is our monthly celebration of a game we're loving. This time we're weaving a narrative tapestry in the character-led tactical RPG Wildermyth. Watch out for more articles on it throughout the month.

In one of the dark, combative corners of my mind there's been a post brewing for years now about how levels are wrong and bad and hold back far too many RPGs. It wasn't really until playing Wildermyth that I could put forward a strong enough game to prove it, though.

I've played a lot of it over the last couple of months. I remember specific battles, plot twists, and the name and memorable moments of a dozen of my characters. But I have no idea what level any of them were. 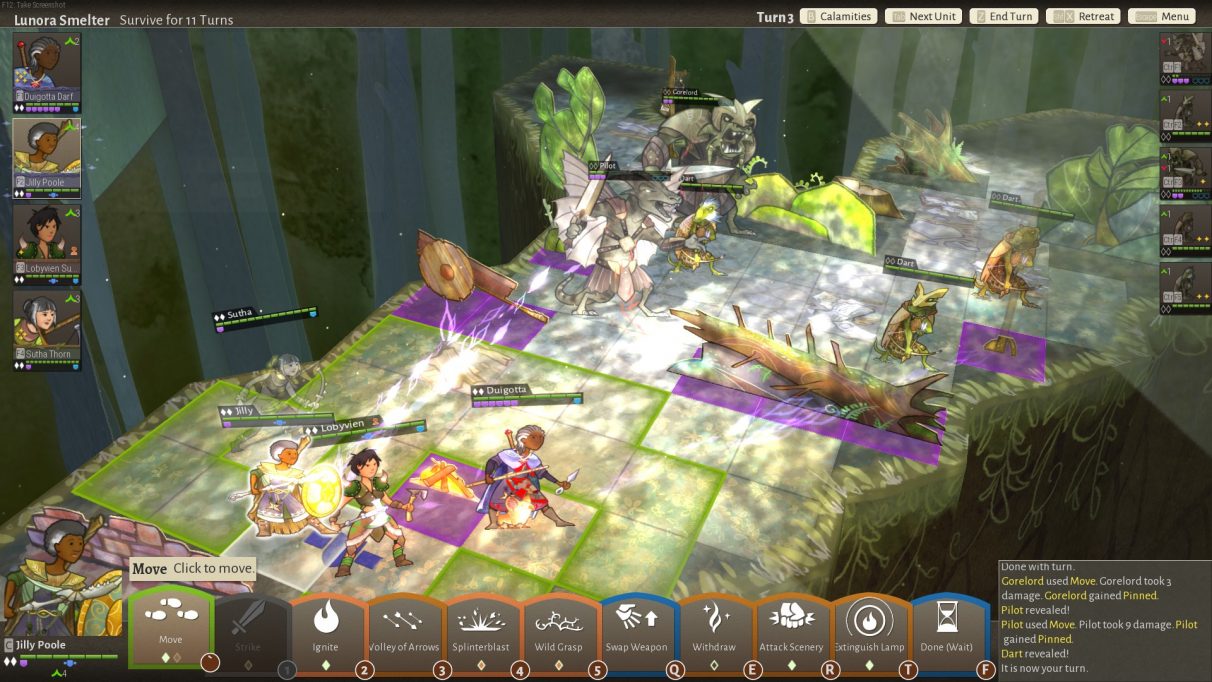 Looking back at some of my screenshots, one of my favourites, a leading warrior who once one-shotted five monsters with reaction attacks in a single turn, was level three. Three! She'd been fighting for 35 years, minus perhaps a decade of peace between chapters, and was still, on paper, at a level where most RPG protagonists can barely overpower an ingrown hair.

I'd never realised. And part of the reason for that is that Wildermyth draws no attention to it. I couldn't even tell you what the statistical differences between each of its three classes are. Now that I think about it, I'm pretty sure warriors have slightly more health, and maybe hunters can move a bit further? It just doesn't really come up. Combat prowess is defined largely by whatever special abilities they pick up.

Each class starts with a standard one, which already changes how you'll use them before the game even gets going. Warriors can use 'Guardian' to counter attack during enemy turns. Hunters can enter stealth so their attacks will ignore armour, and mystics can link with scenery objects and use them to attack or neutralise enemies. Class also dictates which additional abilities they can access when they level up - a presumably-random three are offered, of which you can pick one. It's these that define how the characters fight. Although who knows, perhaps your stalwart defensive spearman will get a subplot where one of your non-combat decisions gives him the ability to launch jets of fire from his hands? 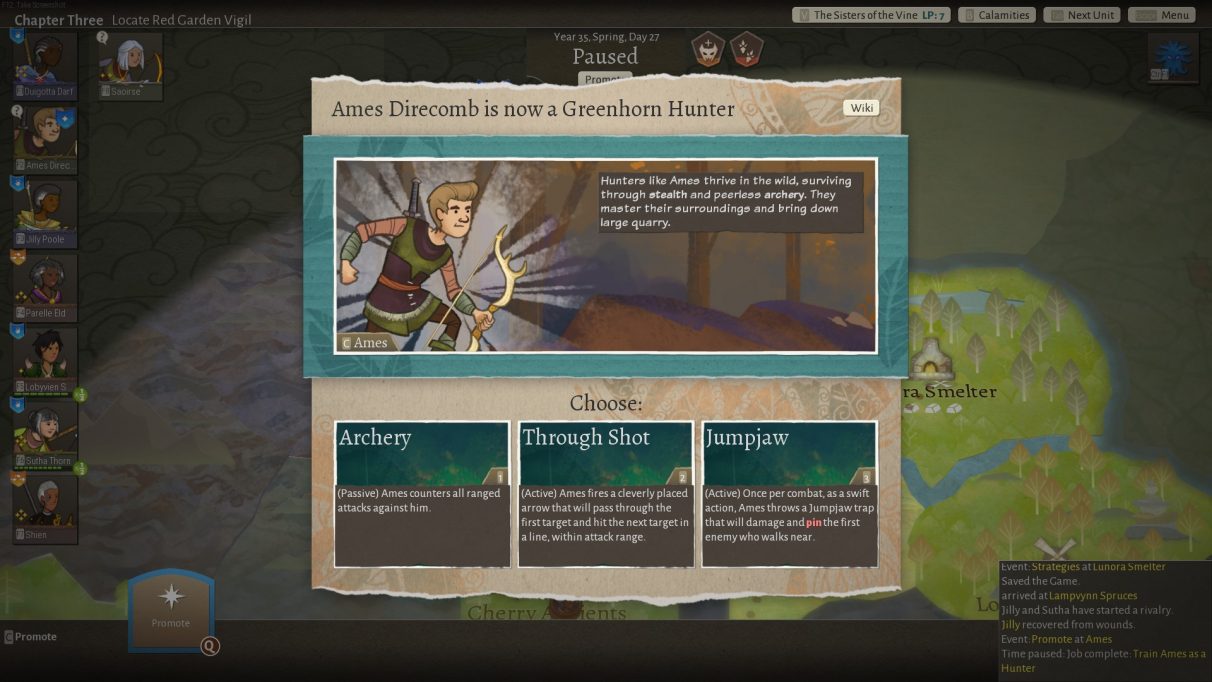 But even the abilities they gain through levelling up feel... natural. I've never thought of it as gaining a level. The levelling screen has no game terminology at all, aside from describing what the new abilities do. And despite completing multiple full campaigns, I still don't know what exactly causes characters to level up, except that it often happens right after someone completes a subplot. The text changes too, sometimes outright saying that someone's experiences have changed them, caused them to grow as a person. And those experiences could be fighting the beast that killed an old friend, or they could be deciding to be kind to a stranger. One of my characters levelled up by talking to her mother.

Wildermyth is of course not devoid of statistics. Equipment makes a big difference, but even that requires no number crunching, and tends to come down to whether someone will fare better in slower, tougher armour, or whether your mystic's backup weapon should be a bow, or a mace and throwing net. Many abilities serve to diversify a role rather than narrow it, and even more so once you start seeing how to co-ordinate attacks and abilities across multiple fighters. You might have your toughest warrior use her challenge ability to draw a particularly scary monster into attacking, so your cloaked hunter can stab it in the rear without risking a deadly counter-attack. Or perhaps one of your mystics automatically damages monsters that come too close, so your other mystic can use mind control to force it to walk in front of him.

Another fave of mine, Lunantha, had the ability to automatically leap forward and attack approaching targets, and that let me lure enemies in with fragile new recruits, only for Lunantha to bash their face in when they got too close. Later on, it clicked that if I gave her a mace, they'd also be knocked back a square, so even if the blow wasn't fatal, they'd have to spend an action to approach again. 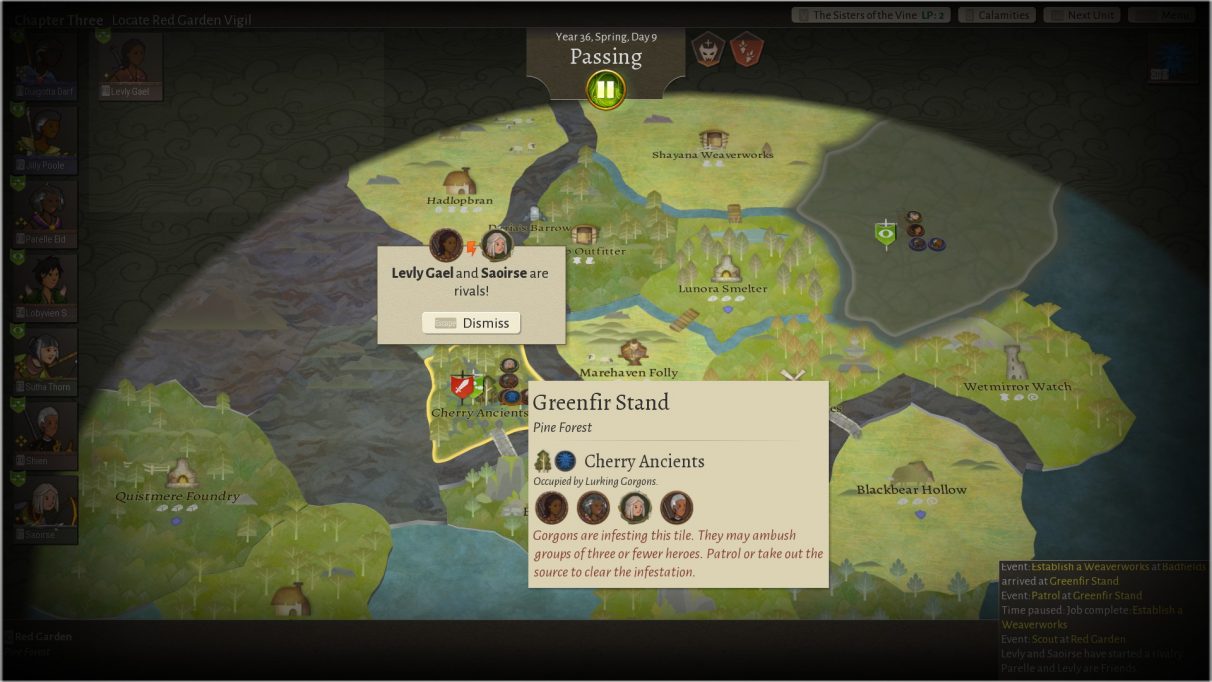 I've no doubt that numbers are being crunched in the background, and indeed, if you delve into someone's statistics screen there are all sorts of the little blighters. But they can be completely ignored, because they take a back seat to the inescapable feeling that in Wildermyth the characters are truly characters. That's how it should be.