I spent a few pleasant but troubled days with Car Mechanic Simulator 2018 [official site] just after launch, reporting that it was a great game saddled with significant technical and interface issues. Since that time, the developers have released approximately eight million and twelve patches (not to mention a feverish mea culpa for the game's launch woes), so it's time to take it back to the shop and see if it's safe to drive by now.

I won't do a full revisit, because the broad thrust of my feelings about the game - that, despite superficially ultra-technical subject matter, it's a deeply relaxing and rewarding game for anyone, car enthusiast or no - remain unchanged. The issue at stake is whether you're still risking losing hours of progress to a crash, with its lousy save system and inconsiderate UI still offering no protection against such things.

I can't be unequivocal here - just because I haven't encountered any showstopping issues in the most recent builds doesn't mean no-one has, and the fact that the devs are still patching it even now suggests there's still a few rusty bits under the hood. But! It does indeed now seem to be in the sort of state I'd have expected it to be in at launch. 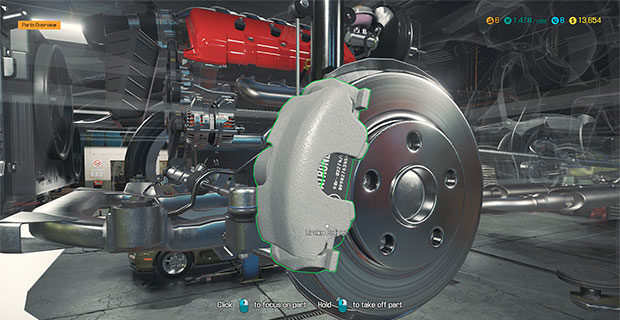 For starters, the frame rate is now a mostly solid 60 even maxed-out, as opposed to ranging wildly all over the place no matter how low I set it, as was the case previously. More importantly, the damn thing hasn't crashed on me once since I went back to it, although I should say that I'm yet to put the same number of hours into it that I did first and second time around. The feel is of a far more stable game, but I guess it's stable until it isn't.

Far more importantly, it's added some major quality of life improvements in terms of savgames. It now has an autosave feature, which as far as I can tell triggers after a completed repair job, so you don't stand to lose anything like so much time in the event of a crash. Clicking 'New Game' from the main menu (whether accidentally or on purpose) also no longer instantly eradicates any existing savegame, which corrects one of the more baffling interface oversights, although I'll never get those nine hours back.

The interface as a whole is still more of a headache than it needs to be, with even the main menu a mess of small words and inconsistent controls, but it's bearable even if it's not as slick as a game this zen ideally needs. Maybe they'll circle back round to a lick of new paint once they've got the engine purring impeccably.

It sounds like the devs might be out of the danger zone now, with their latest update noting that "Since game release day, 2 weeks ago, we were patching fixing and changing game constantly. There were 19 patches so far. We are working around the clock, 7 days a week to make this game work better and to make it bug free." This does not sound at all healthy for the staff, with the update noting that some have not seen much of their families lately and so are now taking some holiday time. Sadness all round.

Planned for forthcoming patches are achievements, more parking garage options, further mod support and an extra test course. It's worth reading through the full change log to date, to get a sense of quite how much they've fixed already.

Which brings us to the question of whether I should revise my former advice - that you should for the time being avoid buying what I do believe to be a great game. Yep, I reckon you're safe to pull the trigger now. It needs more tinkering still, and will apparently receive it, but we're out of the woods now for sure. The car physician has healed itself, and now is the time to go enjoy what is perhaps one of the most oddly absorbing PC games of the year.